Silvio Martinello, a legend on the track and a pretty fine cyclist on the road, has been working as a TV journalist with the Italian broadcaster RAI since retiring 10 years ago. He sits down for an interesting chat with Pez.

Pez: Of all of your palmares, like four Track World Championships, an Olympic Gold in the points, 28 Sixes and a few stages in the Giro and Vuelta, which one means the most?

SM: Obviously, the gold from Atlanta in 1996 was the most important. My memories of that victory are still fresh. 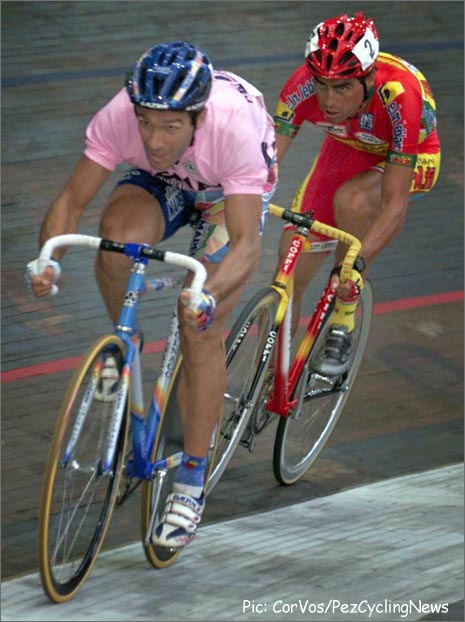 Pez: What do you miss most about the life of a pro?

SM: The travel and the emotions. The simplicity of being an athlete. You train, you put in the time and effort and then you test yourself against others. It’s simple. Life in the working world is much more complicated. As an athlete your adversaries are all wearing numbers, in business or in life they aren’t.

Pez: Most of our readers are probably not aware that you work for RAI as a TV commentator, and a very good one, in my opinion. How did this start?

SM: Ten years ago, I started as an assistant to the director, providing technical analysis, trying to be as clear as possible to the viewers in a way that isn’t banal. Now I work 110 days a year covering all of the major cycling events. Everyone has their own style, Cassani has his and Savoldelli has another. I try to understand and explain cycling and racing to others that haven’t had the experience of a professional cyclist. 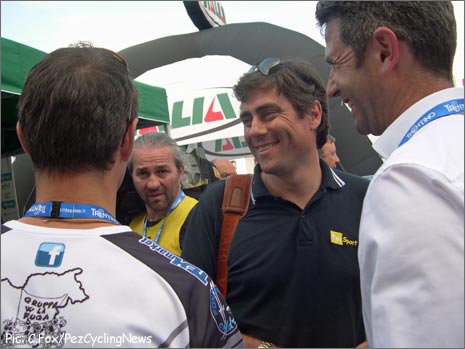 Shooting the breeze at this year’s Italian Road Championships.

Pez: Most of your commentary is from the studio, examining slow motion replays of critical episodes. Also you can be seen before or after the races as an analyst. However, you were the lead guy for the women’s Giro. Is this an eventual ambition?

SM: I’ve always been a team player, trying to help the production and following the wishes of RAI. Sure everyone want to grow, but Cassani has been there a long time and there is a hierarchy. Davide has developed into a personality. I was able to substitute for him earlier in the season and that’s also part of my responsibilities.

Pez: I’m not sure if you know this, but we are pretty much the only journal that reports from the Sixes…

SM: Yeah, I know this, I’ve read them and am familiar with Ed.

Pez: So what do you think of the Six Day troubles?

SM: They’re suffering right now. It’s combination of things, like the demise of their popularity in Germany and that was caused in part by the doping scandals and the current economic crisis isn’t helping either. They need help, but there is a future. While there are some great track riders out there, only the passionate fans are familiar with them. You know, if the Berlin Six had Cavendish and Wiggins, they could easily get 50 or 60 euros a ticket.

The Sixes need assistance from the UCI, getting rid of all of the Olympic events was insane, they should bring them back. They need to get the pros from the road to commit to a three month series during the winter, not unlike MotoGP or Formula 1 with TV coverage too. The guys that are running the Sixes are pretty much the same guys that were running them when I rode and they are cautious and it’s hard for them to change. We need a jump in quality. When I rode, we all fought to get contracts for the Munich Six, for example. It was a great venue and the pay was also great. If you had told me back then, that in 2012 there’d be no more Munich, I wouldn’t have believed it.

Pez: Though I’m familiar with your position on this, could you tell our readers what you think about the exclusion of Italian riders from international events, if they have “a past”?

SM: I am not at all in agreement. If the rider has served his punishment then he is allowed to compete. Those are the laws. It’s even worse for riders under investigation [note: that means Cunego and Gasparotto for this year’s Worlds]. We need to change this. The most important thing is to really get the doping controls set up for the young, amateur riders before they get poisoned with the wrong mentality. That’s where most of our efforts should be pointed.

Pez: If all of our readers knew how good RAI’s coverage of cycling events was, they’d boycott their own transmissions. Ironically enough, the Vuelta was the only race that wasn’t covered this year. Did you follow it?

SM: Yes, I followed most of it. Bold and courageous racing, shorter stages and plenty of mountain finishes that favored climbers and provided fans with lots of interesting cycling.

Pez: You did all three major tours, many claim that the Giro and Vuelta are more interesting than the Tour, why is this so? Was it always like this?

SM: Every professional will tell you that the Tour is incomparable. The level of stress and attention is huge. Every rider feels that and it can impede you. Just to finish and arrive in Paris is a victory. This was so in my time and it is probably more so today. Look, just getting into a breakaway and being out there for 100km and getting caught 10km from the finish and getting your picture in l‘Equipe the next day is really big. While the Giro and Vuelta are important, especially for the national riders, the Tour is the Tour. 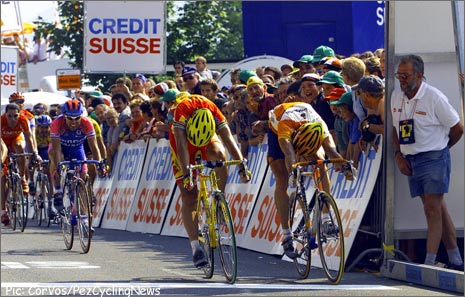 Not just a track star, Silvio also took some great victories on the road like here in the Tour de Suisse in ’99.

Pez: You’ve followed women’s cycling a lot this year. There seems to be two main opinions: Vos is good or Vos is bad for the sport, where are you on this? It seems to me that she needs a Gimondi to compliment her Merckx-ness.

SM: I think you’re right. There’s no Gimondi for her. But she is definitely good for the sport. Vos is so dominant and that brings with it plenty of attention. We cannot help but be amazed at her performances. I’ve been around her and can tell you that she is accessible and modest and kind. The problem is that there is a big gap in performance from the top women athletes to the others in the peloton.

Pez: Let’s talk about this Ride with Silvio on the weekend of October the 19th?

SM: Sure, it’s my first time. Carlo from the Hotel Perlo also with some local club members asked me if I’d be interested in leading a group ride around the Lombardia course and I agreed. Now, I’m trying to get fit so I don’t let down the group. Even though I’ve stayed in shape all these years I don’t ride anymore, so I’ve had to start training again. [note: I would hope Silvio has stayed in shape as he does afterall own a Fitness Center in Padova], 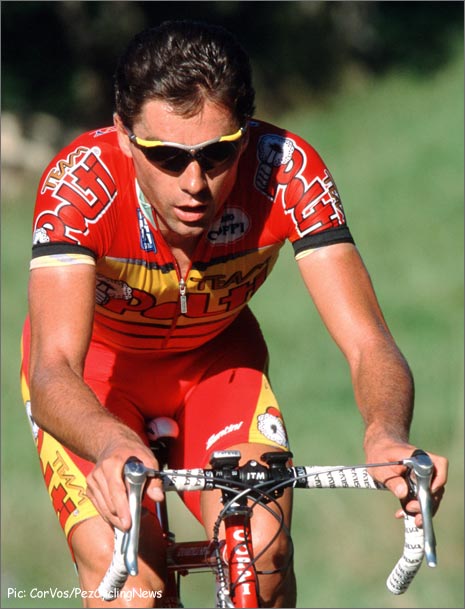 Pez: You’ll do well, I’m sure. Anyway, thanks for the interview, Silvio. I’m signed up for that ride, so I’ll see you there.