PEZ On The Road With OmegaPharma-QuickStep!

You might think visiting Pro teams at their Spanish training camps is all swanning about rubbing elbows with the famous, drinking coffee at beachside bars and being driven about in team cars. Well, sometimes it is – but our man in Spain, Alastair Hamilton, found the other side of the coin with OmegaPharma-Quickstep this week and he still managed to have a nice day with Tom, Cav and the guys.

You know how some days just don’t turn out the way you hoped they would, or even how you thought they might, well Tuesday was like that for me. It all started a few weeks ago when the Omega Pharma – Quick-Step team sent out an invite to their team launch to be held in Belgium. It’s a bit far for me to go from my Spanish base but I did ask if they were having a press day at their training camp in Calpe. 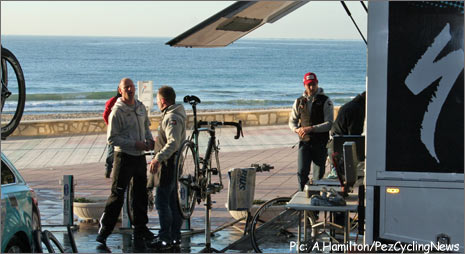 Not a bad place to work!

The team’s head of media relations; Alessandro Tegner emailed be back saying to come down any day, 7th, 8th or 9th of January, great I thought. Let me explain, Alessandro is one of the best team press guys, his press releases are always good, not too long and very useful & when he has press days they are well planned and everything works well with interviews etc. He even usually buys the coffee, but today wasn’t a press day, it was just a day that the press could visit and take photos. 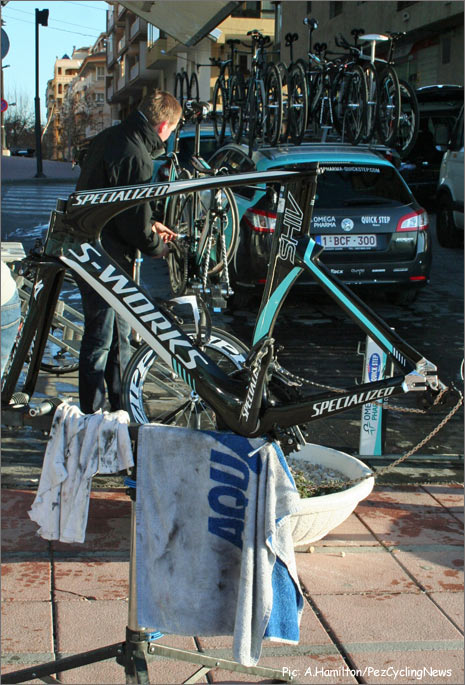 Maybe I should have guessed it was an easy going day as Alessandro hadn’t even told me which hotel they were using this year. Calpe isn’t that big, but the team have used four different hotels over the years, the Esmeralda was always the most popular with the Belgian teams, then they all went across the road to the Diamante Beach. That was until there were some cases of Legionaries disease which may or may not have had anything to do with the hotel, but I did see the Polish CCC and the Australian Orica-GreenEdge team mechanics vans in the car park, so they got a good deal. 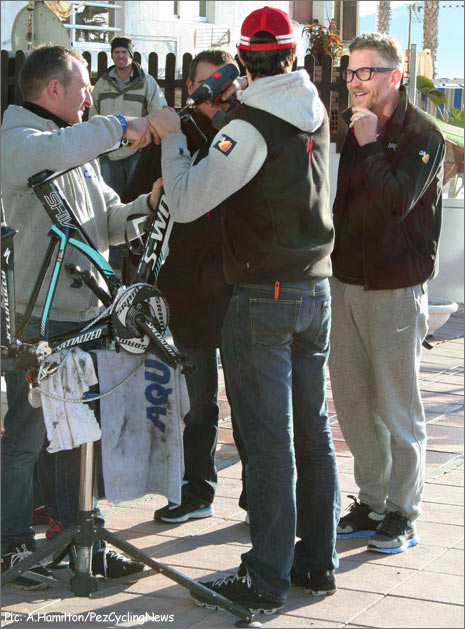 DS Brian Holm isn’t sure about the drill.

The first time I visited the team was in 2007, they were in the Ifach hotel that year and World champion Paolo Bettini held court with half a dozen journalists from all over Europe. After a bit of a drive round Calpe I found the team at the Sol y Mar, it’s the same one that Garmin used last year, so I knew where to park (for free) and how to get in from the mechanics area, right on the sea front, very nice. 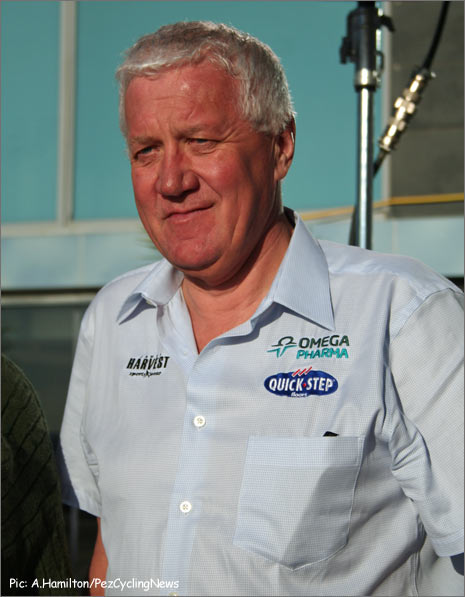 Team Boss; Patrick Lefevere has put together a great team for 2013.

Today was similar to 2007, but it was half a dozen photographers and a film crew instead of journalists. Mechanics and soigneurs were running about getting things ready for the day and working on the time trial bikes. First of the management team to appear was Brian Holm, Tour rider, Paris-Brussels winner and the man said to be the motivation behind Mark Cavendish coming to OPQS and just a jolly nice chap. 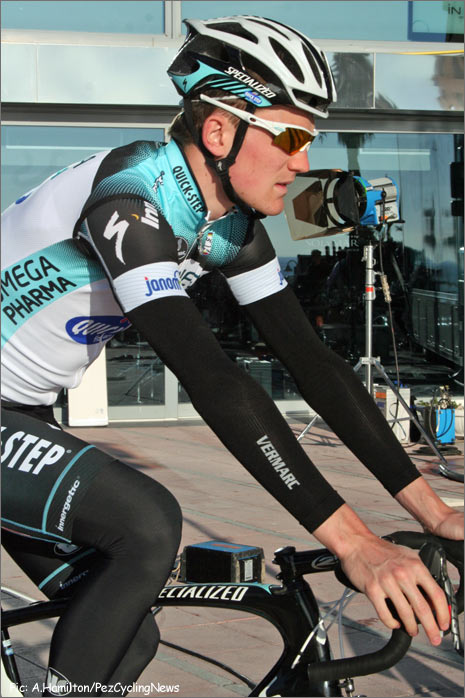 Holm and I are both friends of ex-GB champion; Tim Harris, so we had that in common to talk about, plus both being from more northern climes (he Denmark, me Scotland), we could both marvel at the wonderful weather in this part of Spain and how good it is to feel the warmth on your skin in January. 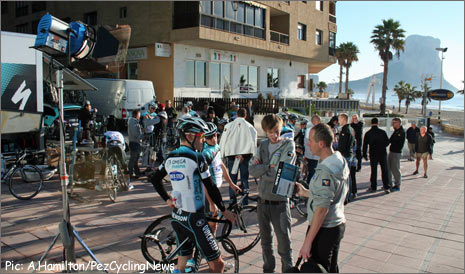 More riders appeared along with the boss Patrick Lefevere, who must be looking forward to this season with Mark Cavendish, Tom Boonen and World TT champion Tony Martin in the team with lots of BIG guns to back them up, he did look confident, but then he usually does. Sylvain Chavanel shot over to the mechanics truck, not sure about the leg tattoo though. 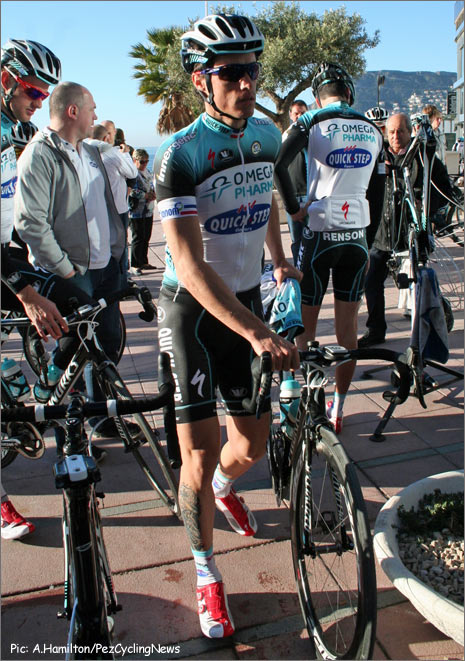 That tattoo on Sylvain Chavanel’s leg looks to be getting bigger?

As the riders started to accumulate, I spotted young Andrew Fenn, he had two wins last year which isn’t bad for a 22 year old in his first season with a WorldTour team. I managed to have a word with Alessandro about the possibility of a couple of rider interviews and no was the answer. The riders were expected to be going on a five hour ride and the team presentation is next week, so… 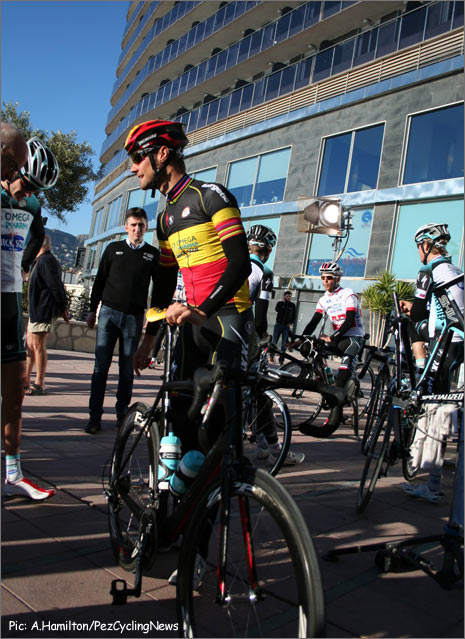 Tom looks thin, but then he’s not been well.

What about next season, should be good for the team? Alessandro; “it depends on Tom; it’s all or nothing in the Classics.” What about Cav, do you know his programme for the season? “Yes we know, but I can’t say because we are having the team presentation next Tuesday and all will be revealed there.” 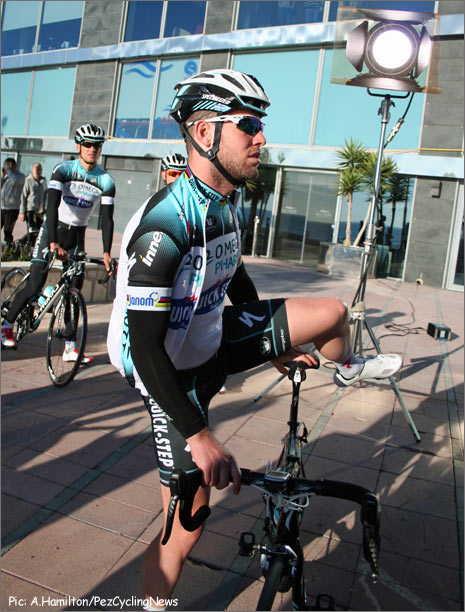 Cav get’s a leg over!

The man himself appeared, Mark Cavendish, it’s not just his chin that was unshaven, but the legs were also sporting a bit of stubble, but if you have legs that can sprint that fast then who cares. 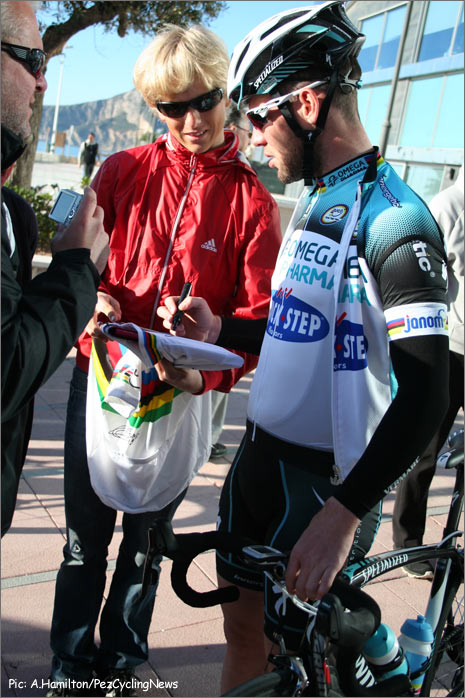 Cav has to please his fans.

There were not so many fans around, but those that were only had eyes for Cav and photos and jerseys for him to sign. As usual he was all smiles and helpful even though the recipients had a difficult Scandinavian name. 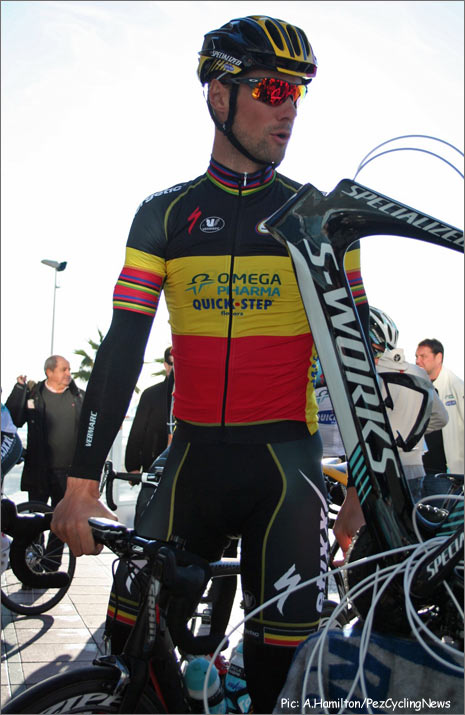 Tom’s not sure about all those cables.

Tom Boonen looks thin, but then he has been in hospital with an intestinal infection, maybe his lighter weight will help in the coming season. 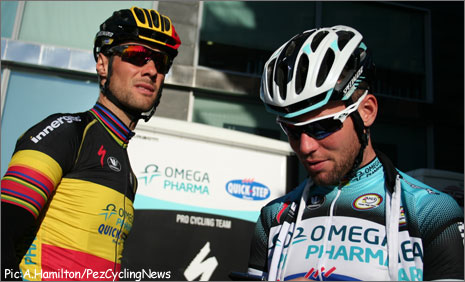 Some see a problem having two big stars in the team, but they have different aims; Boonen wants the Tour of Flanders and Paris-Roubaix, then he will be the best Classics rider ever. Cavendish will be looking at stage wins, points jerseys and the (possible) sprinter’s races. If Cav isn’t there at the end of Milan-Sanremo, Tom could be. 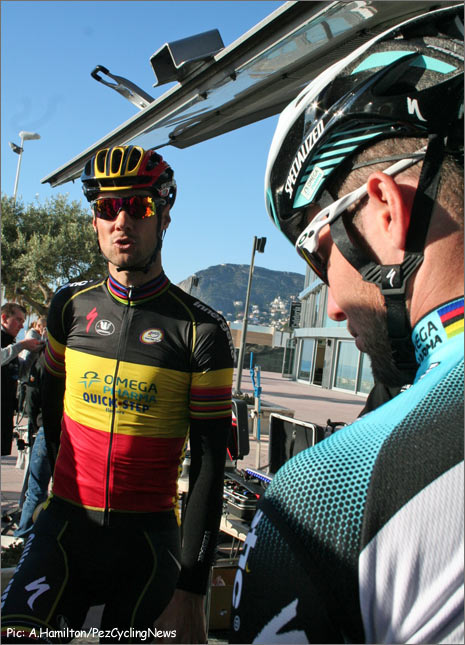 The team were going to split today, Boonen and Cavendish were to ride an hour and then change to their time trial bikes, the climbers group were heading over towards my house, passing 3 kilometres from the door step, that sounded the best for me. 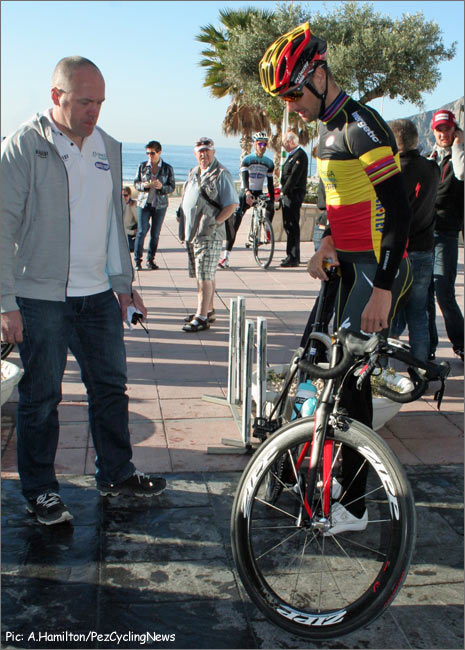 Team trainer Koen Pelgrim explained the route; “out on the main road, then inland to Callosa and up to Guadalest, Confrides, round to Alcoy and back via Pego. That should be about 140 kilometres, if we need to do more then we can do a lap around Pego area.” 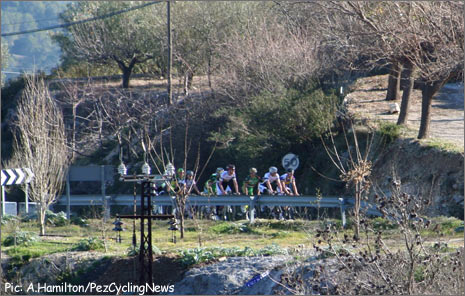 Could that be them?

Perfect, I could get some great mountain shots and maybe get home for lunch. That was the plan, but they didn’t turn up, I did see two groups of Argos-Shimano riders and Alexandr Kolobnev with another Katusha rider and then this bunch of mixed Belgians. 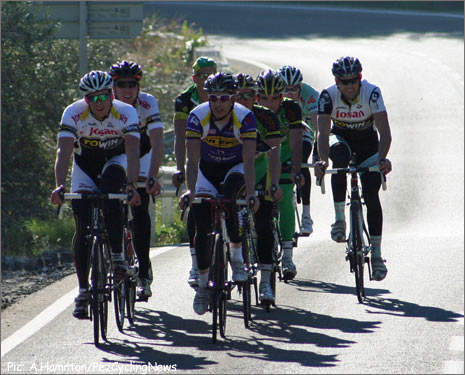 Nope, that’s not them.

The best plans don’t always come to fruition, they didn’t for me and they also didn’t for Nikolas Maes, he was training with the Cavendish/Boonen group when he crashed and fractured his left collarbone. So I have something in common with a WorldTour rider – we both went home early.

Thanks to Alessandro Tegner and the Omega Pharma – Quick-Step for a different day out. Keep it tuned to PEZ for more from the Spanish training camps of Vacansoleil and Argos-Shimano – if I can find them on the road that is!