The Classics just keep on coming and next up is Wednesday’s Fleche Wallonne. With a finish on the brutal Mur de Huy this mid-week race is suited for the tough and explosive climbers that can power up the climb’s steep slopes. Ed Hood takes a look at the course and contenders for 2014.

It’s all change in the Low Countries as the Cobbled Classics give way to the Ardennes races and we move south from the flatlands of Flanders to the lumpier parcours to be found in Belgium’s French speaking southern part – Wallonia. 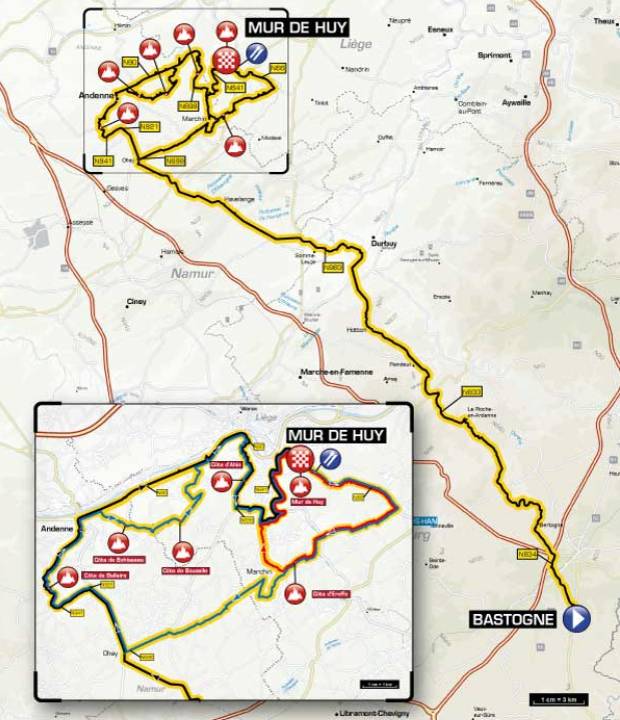 The Amstel Gold Race in equally lumpy Limburg across the border in The Netherlands sets the scene and give us clues as to who’s going to be ‘up there’ in the Fleche Wallonne, the first of the two Classics which used to form, ‘le Weekend Ardennais.’

Between 1950 and 1964 the Fleche was held on the Saturday with Liege-Bastogne-Liege the following day; remarkably, two riders managed the ‘double’ – Stan Ockers in 1955 and Ferdi Kubler twice in ’51 and ’52. Since those days of tough parcours and race scheduling – and even tougher men – the ‘double’ has been achieved on another five occasions, by Eddy Merckx in 1972, Moreno Argentin ‘91, Davide Rebellin ’04, Alejandro Valverde ’06 and Philippe Gilbert ’11.

Those cycling books I used to read in the 70’s told me that the ‘Fleche Wallonne’ had a route which resembled an arrow in flight. I could never see it, personally – but I later read it was because the parcours slices across Wallonia like an arrow. Whatever the reason, it’s the ‘Walloon Arrow’ or ‘Waalse Pijl’ as they say in Flemish. 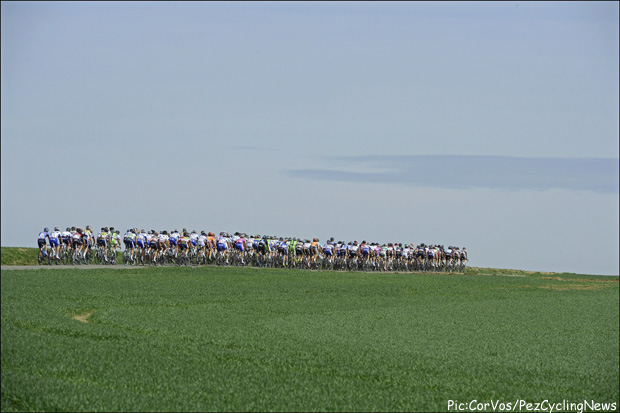 Starting in Bastogne – Bastenaken in Flemish – the race heads northwest to describe loops around and through the town of Huy. These loops include three ascents of the tough ‘Muur Van Hoei’ in Flemish – ‘Mur de Huy’ in French; with ‘Mur/Muur’ meaning ‘wall.’

Whilst it’s not a Zoncolan or Angliru, it’s pretty damn tough – a 1300m climb with an average gradient of 9.3%, and maximum ramps of approximately 17 percent.

There are another eight categorised climbs – including the Cote d’Ahin twice – to give a total of 11 ‘hellingen’ and in the latter stages of the race there’s very little flat road. 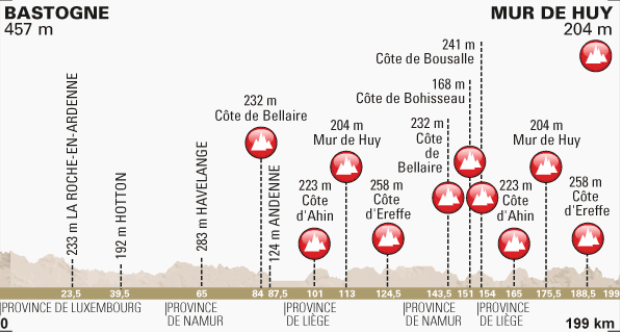 Race distance for 2014 is 199 kilometres, which makes it a more open race – there are many more riders who are competitive over five hours than there are over six-and-a-half hours. The nasty, tough parcours favour the lightweight climber and wiry all-rounder.

There are four ‘record men’ on three wins apiece who, with one exception, illustrate this perfectly.

Belgium’s Eddy Merckx is the exception – a big beast of a man with power and killer instinct to burn – the most successful cyclist who ever lived. Venetian, Moreno Argentin was small but solid with a power to weight ratio which made him practically unbeatable in an uphill sprint. The still active Davide Rebellin is our third three time winner, a waif of a man – you could easily mistake his bike for a junior’s. The fourth of the three time winners was Belgian Marcel Kint – but that was 1943 to ’45 and I’m not that old.

On the subject of age, the Fleche was first run in 1936 with only the 1940 race lost to World War Two. Many of the big names have won here – albeit over a route which has varied much over the years – Riks Van Looy and Van Steenbergen, Raymond Poulidor, Roger De Vlaeminck, Francesco Moser, Bernard Hinault have all won, as well as ‘Big Ted.’

The last decade has seen a real mix of winners and none of them could be described as a man mountain – Davide Rebellin (thrice), Danilo Di Luca, Alejandro Valverde, Kim Kirchen, Cadel Evans, Philippe Gilbert, Joaquim Rodriguez and Daniel Moreno. They’re all hardy dogs – but whippets rather than mastiffs. 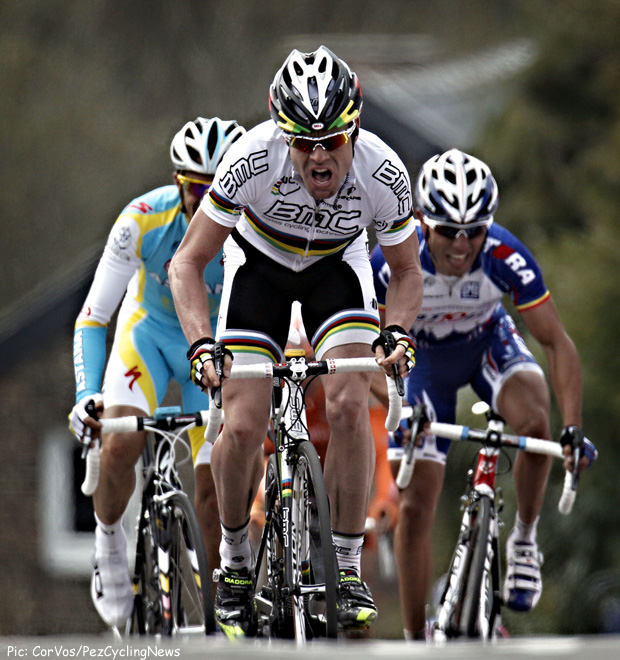 And continuing the canine theme; who’ll be top dog outside the penguin pool on Wednesday afternoon?

The race finishes outside the zoo atop the Muur just in case you think I’ve lost it completely.

We didn’t have the benefit of the result of the Fleche Brabanconne when we went to press for the Amstel preview but this time round we know who did what in that particular race and in Sunday’s Amstel. If we’d seen the Brabanconne result before the Amstel we may have made Gilbert our Belgian tip instead of Bjorn Leukemans – but then again, maybe not…

Philippe Gilbert (BMC & Belgium) comes in to the Fleche Wallone as ‘Super Favourite’ – he’s done the Brabanconne/Amstel/Fleche/Liege ‘quadruple’ before, in 2011 and on the evidence of the first two races he’s capable of it again. Not only does he have the legs and the head – he has the team who are all riding the same wave of morale. 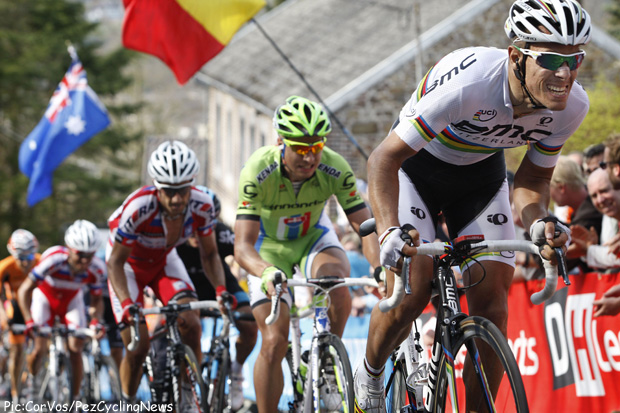 Gilbert on the Mur at last year’s race

Second and third in that race were ‘up and comers’ Michael Matthews (Orica & Australia) and Tony Gallopin (Lotto & France) and whilst Matthews rode well for Simon Gerrans in the Amstel we think that both riders need another year or two under their belts before they can impress the penguins.

In fourth place was Simon Geschke (Giant & Germany); but The Netherlands team opt for Frenchman Warren Barguil as their man for Huy. A double Vuelta stage winner; but he’ll be here for experience more than a podium. Rounding out the top five in Brabanconne was the man we’ve already mentioned, Bjorn Leukemans (Wanty & Belgium). In the Amstel he was 11th despite being in the break in the latter stages of the race; the head is good and he’ll be in the mix again on the Muur on Wednesday.

Turning now to the Amstel, we’ve already mentioned Phil Gil so let’s continue by looking at the man who was second – Jelle Vanendert (Lotto & Belgium). Up until the 2011 Tour de France and his brilliant stage win on the Plateau de Beille, Vanendert was ‘just another pro.’ He won the Vlaamase Pijl Harelbeke in 2007 and was sixth in the Fleche in 2011 but apart from that was unheralded. 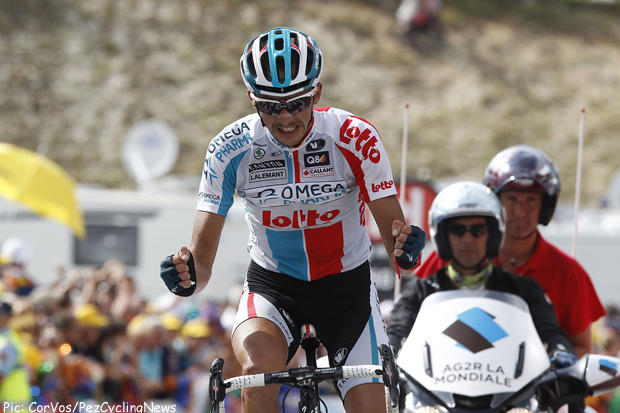 Vanendert taking his breakthrough win at the Tour in 2011

The Tour stage win seemed to see him turn a corner, though and in 2012 he was top 10 in all four of Brabanconne/Amstel/Fleche/Liege with a best of second in the Amstel. However, last season wasn’t great with 13th in the Amstel and 18th in Liege to show for his year. On his showing on the Cauberg on Sunday, he could win atop Huy; but not if Gilbert is with him – he’ll have to be bold.

Third and best of the favourites squabbling for the podium places, but out ridden by Gilbert and Vanendert was Simon Gerrans (GreenEdge & Australia). We don’t see him in the mix in the Fleche – his stocky build is ideal for the power blasts of the Amstel but the Fleche is another animal and GreenEdge may not even include him in their line up.

The man we saw as ‘Super Favourite’ for the Amstel, Alejandro Valverde (Movistar & Spain) was fourth and was either on a bad day or is starting to pay for his stellar start to the season. If it was the former then expect him to be well in the mix on Wednesday – and his team is one of the best drilled if his legs are good.

The third of our big favourites – and also missing the podium on Sunday – was Polish Champion, Michal Kwiatkowski (QuickStep); another man who came off a sparkling early season but was ‘only’ fifth here. Was it too much too soon, whilst Gilbert nursed his form to maturity in the one week of the year which matters most for him? However, Kwiatkowski was fifth in the Fleche last season and after the way he’s ridden so far in 2014 it would be foolish to discount him. 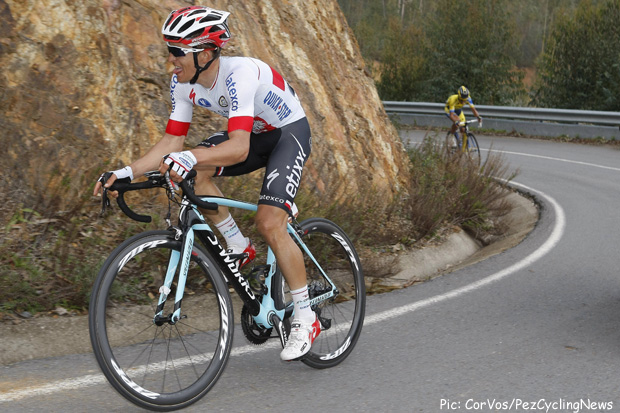 In sixth spot was Simon Geschke – who’s already been the subject of our pontificating – and in seventh was Bauke Mollema (Belkin & The Netherlands) he was seventh in the Fleche last season and whilst a repeat of that is well possible we don’t see a podium.

Enrico Gasparotto (Astana & Italy) in eighth spot was a man we hesitated to nominate as a favourite, his form hasn’t been scintillating thus far in 2014 but he did finish 2013 with seventh in Montreal and fifth in Lombardia.

Ninth in the Amstel was last year’s Fleche winner, Dani Moreno (Katusha & Spain), a result which speaks for itself – he’ll be there on that final zoo visit at the top of the Mur. In the ‘walking wounded’ file we have his Catalan team mate, Joaquim Rodriguez who won the Fleche in 2012 but came down heavily in the Amstel. If he’s not 100% then he can’t win; but wants to ride in support of Moreno and try to get back ‘on cam’ for Liege. 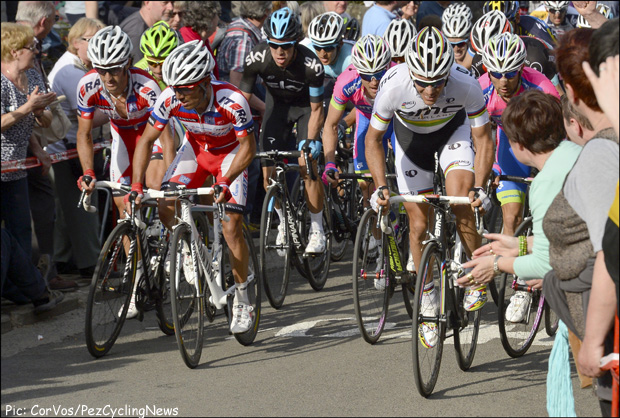 In the same file we have last year’s Liege winner and fourth over the line in the 2013 Fleche, Dan Martin (Garmin & Ireland) but DNF in the Amstel; sore knee, allergies or playing mind games?

We’ll know for sure on Wednesday.

And to conclude – your handy PEZ check list: start sheet, TV/computer, nibbles and beer – Wallonia is home to three of the seven major Trappist brews, Chimay, Orval, and Rochefort. But remember that they’re a bit like the Muur, not to be messed with. And if you can’t see it live from somewhere in Belgium – check Steephill.tv for the nearest internet feed.