Het Nieuwsblad kicks off the cobbled cycling races on Saturday before the circus moves south to Kuurne for the semi-classic 2014 Kuurne-Brussels-Kuurne on Sunday. Both races are on the 200K mark and venture into the Flemish Ardennes above Oudenaarde, but KBK brings a much more relaxed attitude, better fan access, and enough cobbles and ‘bergs to cap an excellent weekend.

Whilst Kuurne-Brussels-Kuurne is more of cult race, it’s not as tough or as desirable to have on your palmares as Gent-Gent which is the cool local name for Het Nieuwsblad. There are a couple of reasons for this; Het Nieuwsblad is a UCI 1.1 HC whilst Kuurne is ‘only’ UCI 1.1; not that this is a bad thing for the fans. 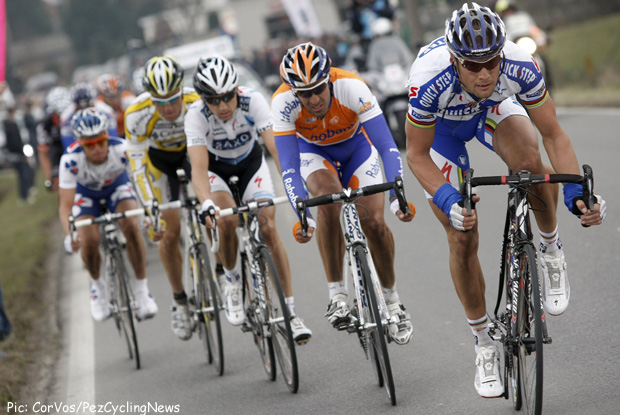 Hard men and hard roads but not quite the same prestige as Het Nieuwsblad. Tom Boonen here took the win at KBK in ’09

The Saturday race is now part of the ‘Flanders Classics’ races along with Dwars Doors Vlaanderen, Gent-Wevelgem, the Ronde Van Vlaanderen, Scheldeprijs and Brabantse Pijl – complete with VIP packages, barriers and janitors to keep you away from the shiny bikes which the sponsors have invested a lot of money in to try and sell you.

Kuurne on the other hand is the real deal, the teams line up on the main street with buses and bikes right there and riders and fans all happily mingling without any hassle – it’s all much more laid back than on the Saturday. As a 1.1 it’s open to Continental teams which also makes life interesting for the fans with lesser known French and eastern European teams often in the mix.

This means the field quality isn’t as high, albeit the cream is the cream irrespective of what the milk is like and QuickStep, Lotto, Sky, Katusha, Belkin and the other big hitters all line up outside the sports centre in Kuurne alongside AN Post and Doltcini – after the crazy brass band has done it’s thing, of course.

The parcours aren’t as savage as the day before, yes, there’s the Cote Du Trieu, Kruisberg, La Houppe and Oude Kwaremont – but there are also 50 K between the last climb and the finish line. This means that it often comes down to a bunch sprint and the finale isn’t as dramatic as the previous day. In fact when Cav won in 2012 the last hour had us nodding off – but maybe that was the Jupiler? 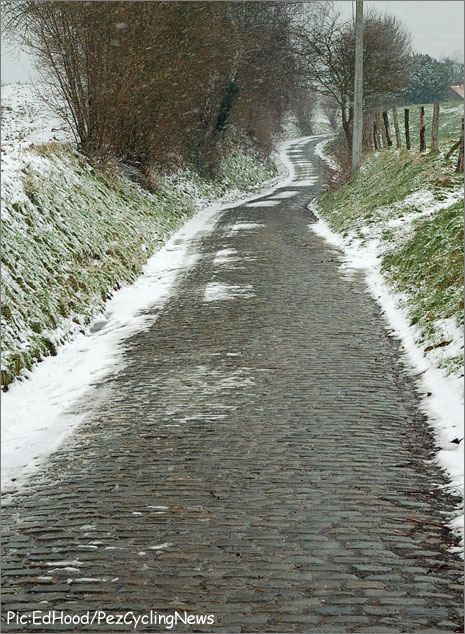 There was no sleeping during the race last year – cause there wasn’t one after it was cancelled due to snow.

The race name is a misnomer these days, it was OK to go all the way to Brussels in 1945 when the race was first run but not in today’s traffic melt down around the Capital. It’s not the best parcours for multiple sightings of the race, describing as it does a flattened loop to the west – Het Nieuwsblad with it’s multiple tight circuits is much more spectator friendly.

There’s no out right ‘Record Man’ for the race with a clutch of riders on two wins including Roger De Vlaeminck, Hendrik Redant, Johan Museeuw and Tom Boonen; no willowy climbers there, you’ll notice – and all Home Boys. 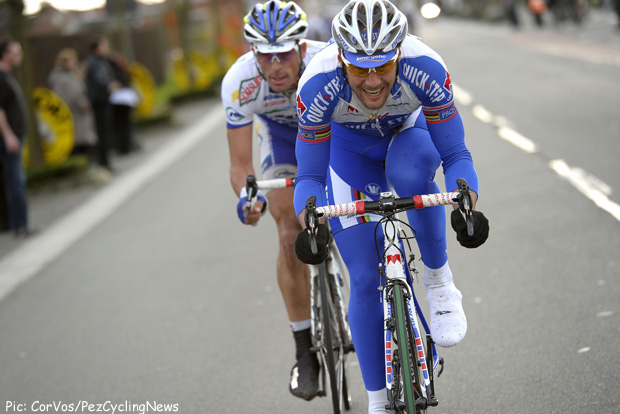 Tom Boonen on the attack again in the 2011 edition

As with Het Nieuwsblad it does help if your Belgian; there have been 50 home winners with The Netherlands a distant second on eight. The race has a cosmo flavour to it’s winners; Shay Elliott is still the only English speaker to have won Het Volk – as it was then – but Cav for GB, Chris Sutton for Australia and George Hincapie for the USA have all won in Kuurne; not to mention Estonia’s Jaan Kirsipuu – and with Jaan we’re talking ‘hard’ with a capital ‘H.’

The roll of honour has some other interesting winners in there; six day monarch Patrick Sercu – The Flemish Arrow – in 1977, a certain Patrick Lefevre – now QuickStep’s legendary Svenglai – in 1978 and French fast man Fred Moncassin in 1995, French guys didn’t win race like this in the 90’s. But enough of the history already, who’s gonna win?

We finished our Net Nieuwsblad preview with QuickStep, so let’s start with them.

In the unlikely event they don’t win on Saturday then they’ll win here, that’s been the pattern in the past. They have Boonen, Terpstra and Stybar with the likes of Stijn Vandenbergh and Andy Fenn in support – they ain’t here for a top ten. Sky have Edvald Boasson Hagen (Norway) and Ian Stannard (GB) but it’s most likely to end in a bunch sprint, therefore . . .

Europcar have Olympic Omnium and Worlds U23 medallist Bryan Coquard – the boyish Frenchman rattled out the wins in his first pro season and is winning already in 2014 and at 200 K the distance won’t kill him. 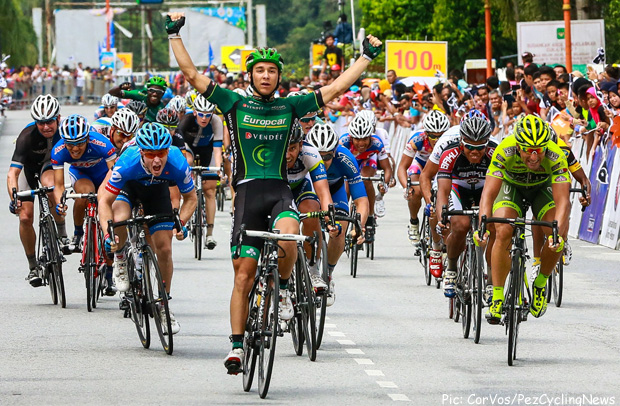 Coquard for the win this year?

Another of the new generation fast Frenchmen is F des J’s Arnaud Demare, the former U23 world champion rapidly found his feet with the pros and is fearless as well as rapid.

Tyler Farrar for Garmin? Not now.

Katusha have Norwegian hard man Alex Kristoff – he won’t be far away.

Big Dutchman Moreno Hofland is a new kid on the block for Belkin but was mightily impressive in winning the last stage of the Ruta Del Sol. And the favourite?

Andre Greipel; Lotto’s German champion is pinging just now and pumping out so many watts he won’t even notice the bergs – and remember there’s an hour for him to get back after the last climb if he needs it. He also has a hard, disciplined train to lead that charge up Kuurne’s main street. 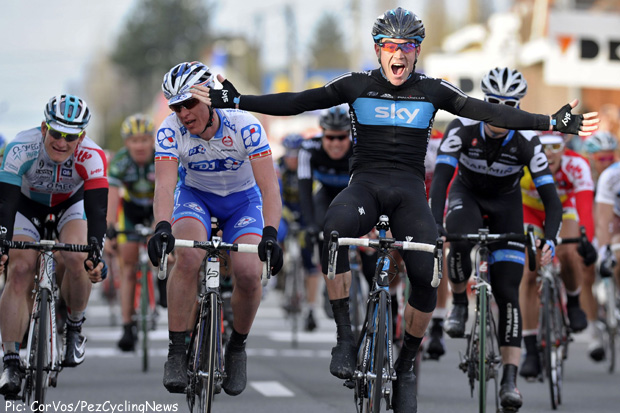 PEZ will be there, roadside to reach the parts of the race the others can’t because they’re sitting in the Press Room.