The cobbles and craziness that is Paris-Roubaix is just days away so Ed Hood pulled out his form guide and his crystal ball to have a look at this year’s race.

‘Can anyone stop Cancellara?’
And that’s ASO, the organisers, asking the question in their latest press release. The answer is; ‘it’s unlikely.’ 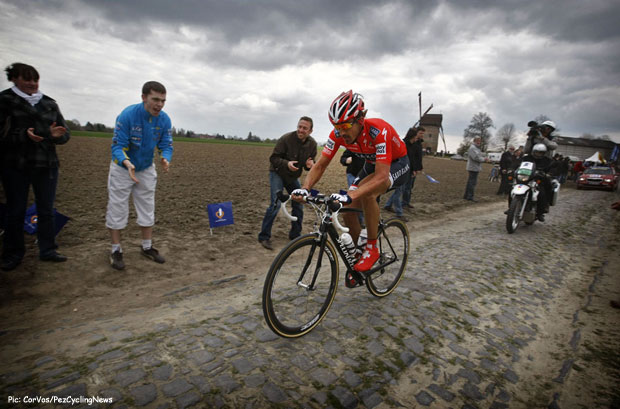 In 2010 Fab was simply unstoppable. A 3rd Roubaix victory this Sunday?

‘Paris-Roubaix’ is a misnomer in these days of three and four car families – only the Tour can disrupt the flow of traffic in The City of Light. The race actually starts in Compiegne, north of the capital – but at the other end in does what it says on the tin, finishing on the hallowed bankings of the big old concrete track in Roubaix. In between there’s not a big hill in sight – 254 kilometres of flat roads? Cavendish has to win!

Well, it’s not that simple, at Troisvilles, after 96.5 kilometres is the first sector of what makes this race unique – pave. We call them ‘sets’ or ‘cobbles’ – chunks of granite, laid close together on a sand bed to surface roads; before Scotsman John Loudon McAdam invented his ‘macadamisation’ method two centuries ago and gave us the basis for just about every modern road in the world – except for Belgian concrete section, that is.

There are 27 sectors of pave, counting down from Troisville as sector 27 to sector one, the ‘Espace Charles Crupelandt’ – a 300 metre stretch of very neatly laid cobbles right outside the velodrome with the names of every winner etched into certain of the stones. But those 300 metres are the only neatly laid cobbles in the entire 52.6 kilometres of pave which punctuate the final 150 kilometres of the race.

Each sector is given a difficulty rating from one to five based on its length, the unevenness of the cobbles, its overall condition and its location. There are three five-star sectors with the last coming just 20 kilometres before the finish on the Roubaix Velodrome. The most famous/notorious sector is the 2,400 metres ‘zone’ 17, named as the ‘Trouee d’Arenberg’ by the organisers – the Arenberg Trench; also known as the Forest of Arenberg. First used in 1968 it was suggested by Pole turned Frenchman and miner turned professional cyclist, local man Jean Stablinski, whose famous quote; ‘Paris–Roubaix is not won in Arenberg, but from there the group with the winners is selected,’ still holds good. Believed to be the route of a Roman road with the cobbles laid down some 200 years ago, it’s not for the faint hearted. With 100 kilometres to ride, there’s still a big group in contention, with the battle for position starting well before the old colliery which marks the start of the sector and the leaders hurtling in at speeds approaching 60 kph. 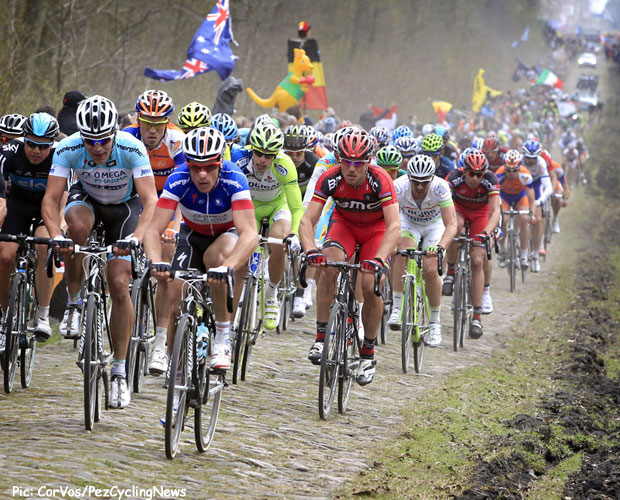 The big moves tend to come on the longer sectors – like the 3000 metres sector 10, Mons-en-Pevele at 205 K, the longer sectors give the strongmen the chance to press home their advantage with the chase very difficult to organise on the pave. Last year, Boonen drove hard across each sector, once he was clear and ‘cruised’ on the tarmac in between. He makes it sound easy, but then he’s won the race four times; putting himself on a par with ‘Monsieur Paris-Roubaix’ Roger De Vlaeminck. From 1969 to 1982 the Belgian had stats which read like this: 5, 2, 7, 1, 7, 1, 1, 3, 1, 2, 2, 0, 2, 6. 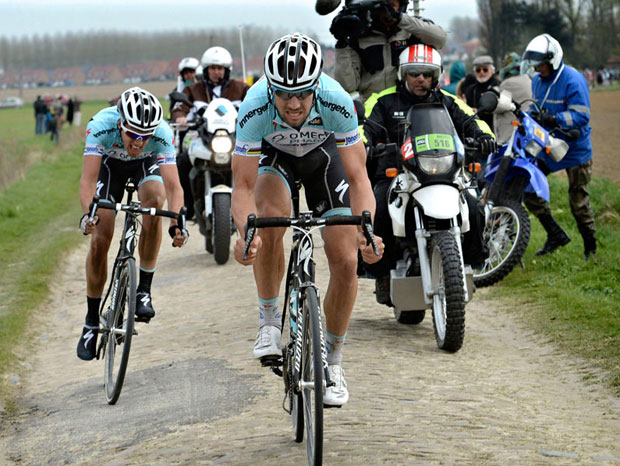 Boonen putting the hammer down in 2012.

Boonen is the archetypal Paris-Roubaix winner, big, strong, solid, aggressive – perhaps not as agile as cyclo-cross expert Roger – but on his day giving an impression of invulnerability. But not this year – his winter and spring have been severely compromised by illness, injury and crashes and he won’t even be lining up.

This year the cloak of invulnerability has been picked up from the Colosseum dust by Spart . . (it’s no use, I can’t write it!) Fabian Cancellara (Switzerland & Radio Shack). Third in Milan-Sanremo; dominant winner in the E3 and in a class of his own in Flanders, the question is indeed; ‘Can anyone stop Cancellara?’

Crashes, punctures or sudden illness apart, it’s difficult to envisage his failure. But there are another two spots on the podium; and we think we have a couple of names that aren’t getting talked about who’ll be right there.

Here’s our take on the men who’ll enliven the 111th Paris-Roubaix, team by team.

Argos: Germany’s Vuelta star, John Degenkolb looks likely to us. His form has been to slow to come, but he looks solid to us and ready to go top six on Sunday.

BMC: American phenomenon Taylor Phinney has won the U23 version of the ‘Hell of the North’ twice – top ten maybe, this time, with the real ‘bears?’

And we like the look of Daniel Oss (Italy); third in the E3 and 12th in Flanders – he has that spring in his step again which seemed to fade during his last season with Liquigas.

GARMIN: Tyler Farrar (USA) is one of our favourite riders, not many Americans have immersed themselves in North European culture like Farrar has – setting up home in Gent. He’s been close to the win in Mallorca and Spain and was sixth in the Scheldeprijs – he’s a man desperate for a result.

Ex-winner Johan Vansummeren is in good shape, not ‘super,’ but could be of great advantage to Farrar if the man from Wenatchee, Washington is in the final mix.

GreenEdge: Sebastian Langeveld (The Netherlands) was fifth in the E3 and 10th in Flanders, but is perhaps not just quite robust enough for those long sectors?

IAM: Heinrich Haussler (Australia) was ‘Man of the match’ and fourth in Gent-Wevelgem and a fine sixth in Flanders. His head is good and so are his legs – a podium is just about possible, we think. 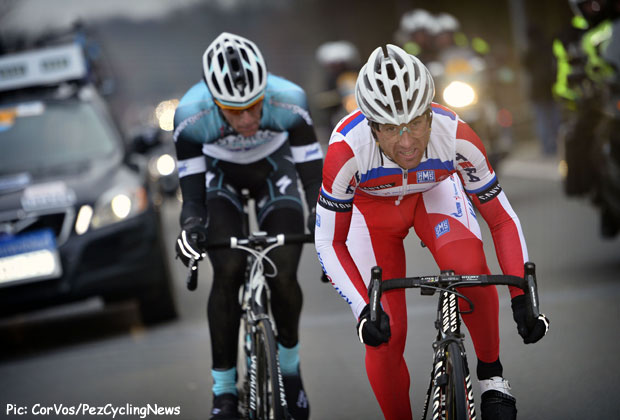 Paolini on his way to winning Het Nieuwsblad.

Katusha: Luca Paolini (Italy) has returned to the form which twice saw him on the podium in the Primavera; he won Het Nieuwsblad and has been good in all the northern races. Norwegian team mate Alex Kristoff won a stage in De Panne and looks capable of a breakthrough – both can be top ten.

Lampre: Italian coolster, Pippo Pozzato? we’d like to see it, but it’s unlikely. 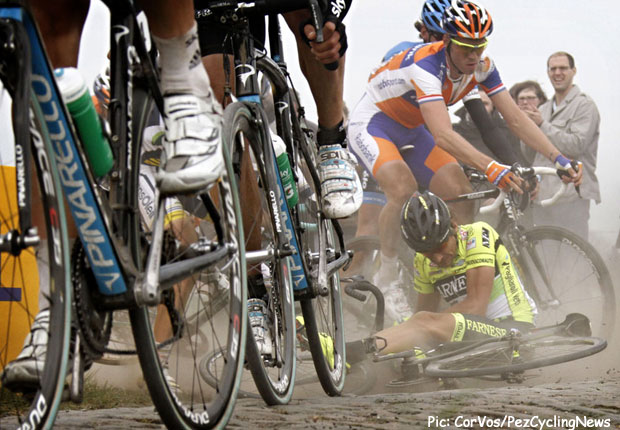 Pippo was looking good last year until this crash set his hopes back.

Lotto: It sounds crazy, but after his showing in Flanders we have to mention German Gorilla Andre Greipel’s name.

QuickStep: Have Sylvain Chavanel (France) who won De Panne and classy Dutchman, Niki Terpstra – however, both ride better when Boonen’s magic is sprinkled around. But Viktor – PEZ’s resident Nostradamus – and I agree that big, strong Stijn Vandenbergh is a better podium possible – he’s just such a beast of a guy. 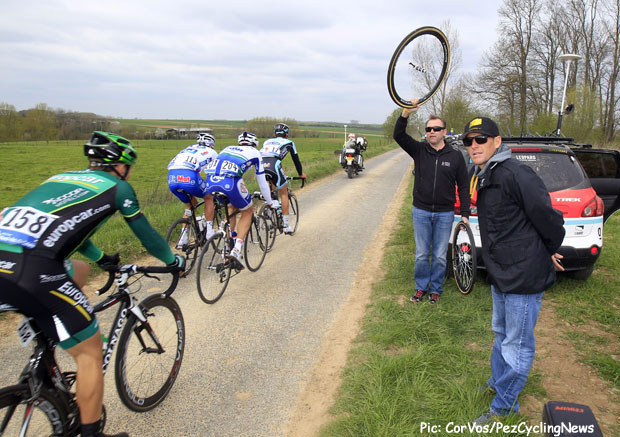 This year Fab will have to make do without these two guys in his corner…..

Radio Shack: Not only is Cancellara in great form, so is his team, with Stijn Devolder (Belgium) and Hayden Roulston (New Zealand) particularly impressive in de Ronde. It’s a luxury which the man from Berne hasn’t always enjoyed and which boosts his already solid ‘favourite’ tag.

Sky: On paper, they should be one of the strongest – and far be it from us to criticise their training methods, but as we said last week, before the Ronde that missing Paris-Nice and Tirreno wasn’t the answer. Riding at ‘x’ watts for ‘y’ kilometres up mountains is one thing – but in the rough and tumble of the Northern Classics there are many, many variables. Ian Stannard (GB) looked tired in Scheldeprijs; we think their best bet is Australian Matt Hayman – but if Ian or Geraint Thomas (Wales) proves us wrong, we’ll be delighted. 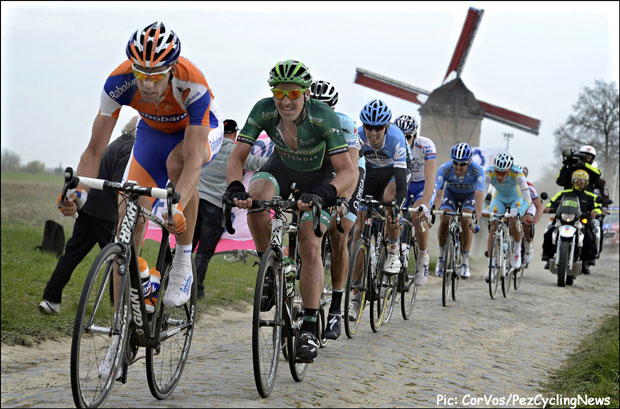 Team Europcar: Last but absolutely not least the French outfit always rises to the occasion. There’s no Tommy Voeckler but there’s big strong Paris-Nice prologue winner Damien Guadin – who was built for the pave and is well favoured by Viktor. And they have last year’s runner-up, Sebastien Turgot. Turgot’s name isn’t being bandied about, but 18th in Milan-Sanremo, 15th in Het Nieuwsblad, 12th in Dwars door, 10th in the E3, 8th in Flanders and 12th in the Scheldeprijs paints a picture to us – we see him reprising last year’s second spot on the podium.

And whilst there’s not much I’d argue with former winner Bernard Hinault about, I simply cannot agree with his statement; ‘”Paris–Roubaix is plain stupid!”

PEZ will be on the dusty road side and square eyed on the monitor to give you the very best in reportage on the Queen of the Classics. And remember; it’s always best taken in with a Pelforth Brun in your hand.

French Fanatics And ‘Their’ Paris-Roubaix