Race Preview: With 9 stages of tough racing on the agenda including two difficult time trials this year’s Tour de Suisse is sure to be a hard fought race. With some of the peloton racing for the glory, others for Tour de France spots and others as their last stop before a post Giro rest picking the winner is difficult but Ed Hood thinks he has the answers…

Some contend that after the three Grand Tours – Italy, France and Spain – the Tour de Suisse is the third most important national Tour on the calendar. Whether you share that point of view or not, what’s undeniable is that it’s a long established and prestigious event with a reputation for flawless organisation – as you’d expect in the land of Longines and Tissot – and an important place on the calendar as the last of the big preparation races for le Tour de France. 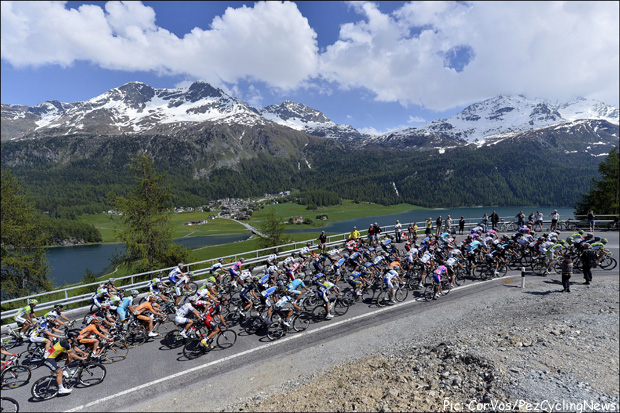 The beauty of the Swiss mountains during last year’s race

The race was first run in 1933 when Max Bulla of Austria won; the current edition will be number 78 – four editions were lost to World War Two.

‘Record Man’ on four wins is classy Pasquale Fornara who won the race four times between 1952 and 1958. The Italian’s career spanned more than 20 years during which times he stood on the podium at the Vuelta and Giro – winning the King of the mountains and stages in the latter – and won the Tour of Romandie.

Despite Fornara’s four wins, the Italians rank second to the home nation on 19 victories; the Swiss have racked up 23 appearances atop the podium. The Italian winners include Gino Bartali, Vittorio Adorni, Gianni Motta – and ‘Mad Heart’ himself, Franco Bitossi, the fearless roadman sprinter who used to have to take a rest at the roadside if his heart was having one of its ‘bad turns.’

In third spot is Belgium on eight wins with six of these coming in that magnificent era for Belgian Cycling, the 70’s, with both Roger De Vlaeminck and Eddy Merckx leaving their mark on the event. It’s a long time however since the red, yellow and black flew over the GC podium; 33 years have passed since that man of whom so much more was expected, Luc Roosen who gave Belgium her last winner. 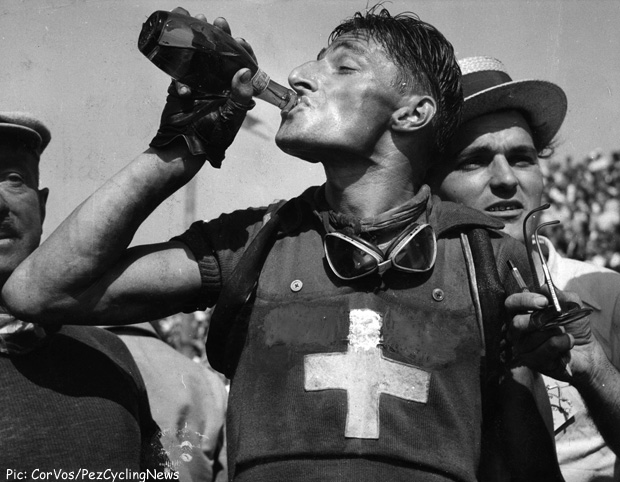 Other Swiss notables to win include, chronoman, Swiss Pro Road Champion and Tour de France stage winner, Rolf Graf; versatile climber Beat Breu, who as well as winning on l’Alpe d’Huez was a Worlds ‘cross medallist and rode behind the big motors; Olympic Road race, Worlds Cyclocross and Liege-Bastogne-Liege winner, Pascal Richard; Oscar Camenzind and Alex Zuelle of whom we’ll say no more – and of course, a certain Fabian Cancellara.

Cancellara’s name and that of Sean Kelly – who won the race twice – endorse the fact that despite Switzerland being very mountainous, it’s not just about pure climbers; strongmen who perhaps can’t endure the endless days in the mountains of a three week Grand Tour can use their power to get through nine days. 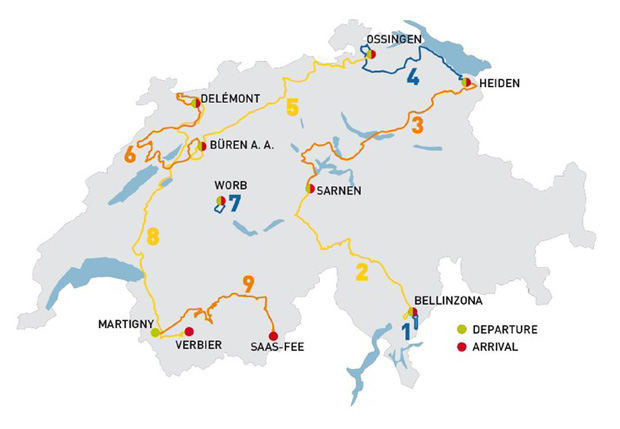 As you might expect from a race in the home of watch making and sponsored by Tissot, there are two time trials within its nine stages.

Stage one: A time test over 9.4 kilometres in the World Heritage town of Bellinzona with one long drag and descent – Tony v. Fabian say the fight posters; albeit the Suisse is nursing some nasty road rash and contusions from hitting the deck recently during a try out on the race’s second chrono course.

Stage two: Takes in two HC and two second cat. ascents in the 182 K between Bellinzona and Sarnen with one of the HC climbs being the Gotthardpass – the chrono winner will have to be on a good day to hold on to that jersey.

Stage three: Is the second longest stage of the race at 203 K from Sarnen to Heiden with three second cat. climbs in this rolling day it could go breakaway – or it could be one for the sprinters. 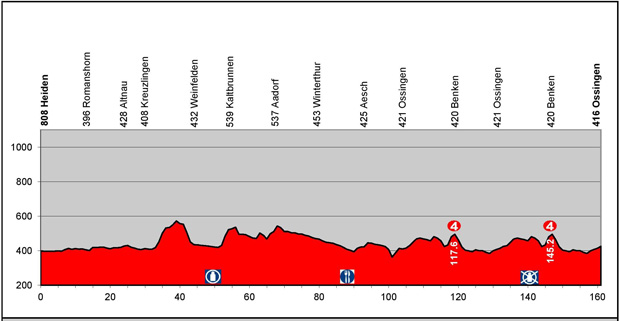 Stage four: Is rolling again and one for the sprinters with just two fourth cat. climbs in the 160 K between Heiden and Ossingen, home town to former Tour winner and World Pro Road race Champion, Ferdi Kubler.

Stage five: From Ossingen to Buren, some 184 K with two fourth and two third cat. climbs – it could go break or bunch but more likely the latter with QuickStep on Cav Alert.

Stage six: Buren to Delemont is another 184 K; but not a sprint day with a first, two second and a third cat. climb in there on a parcours with little flat.

Stage seven: Out come the low pros from the truck for the 24.7 K TT at Worb; it’s pure power – a Tony v. Fabian rematch with long drags and fast stretches coming off them.

Stage eight: Delemont to Verbiers, the first 200 K of this longest stage at 219 K aren’t too savage – but the last 19 make up for that with a third cat and an HC climb to the finish at Verbiers in there.

Stage nine: There’s no ‘show boat’ last stage to this race; not with two first, a second and an HC cat climb within the 157 K from Martigny to Saas Fee.

The blurb says of Saas Fee; ‘Pearl of the Alps with 80% sunny days per year, 100% guaranteed snow and 4545 metres above daily grind level’ – those first two facts are nice but that third one is gonna hurt.

We’ll stick with alphabetical order to avoid cries of; ‘favouritism.’

It’s appropriate that Fabian Cancellara (Trek and Switzerland) should be the first name we mention; he won this race in 2009 and over the years has accrued 10 stage wins. He was second into Sanremo, won Flanders and was third in Roubaix – but he’s no longer as dominant against the watch – he had a break after the Spring Classics before coming back low key in the recent Bayern Rundfahrt. It’s hard to say how he’ll go but bearing in mind that crash we mentioned – whilst he was recce-ing the chrono parcours at top speed – he’s not here just for the views and muesli.

World Champion, Rui Costa (Lampre & Portugal) has won this race for the last two years taking four stages in the process, the hard parcours suit his style but he hasn’t won in that rainbow jersey yet despite coming close at Paris-Nice (second on GC) and the Tour of Romandie (third on GC). He’ll want to make it a hat trick but Lampre isn’t Movistar when it comes to back up . . . . 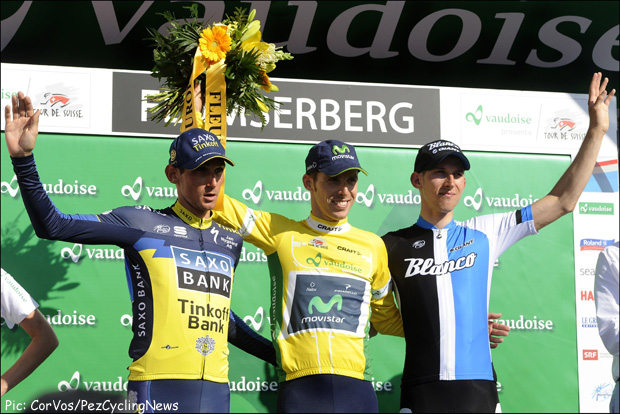 Cadel Evans, (BMC & Australia) wears the #1 dossard in BMC’s home race – with the big question being; ‘can Cadel lift himself after a tough Giro, physically and mentally?’ Watch for his Swiss team mate Silvan Dillier in the moves, we think he’s headed for the top.

Roman Kreuziger (Tinkoff & Czech Republic) won this race in 2008 and has been second twice so it’s a race which suits him. There’s no Alberto to look after and he has a very strong team behind him; he won’t be far away.

Tony Martin (QuickStep & Germany) won’t enjoy those big Swiss Toblerone peaks but he’s been second in this race before and has two opportunities to make time with those chronos to his advantage. And his QS team has plenty of horsepower with Boonen, Steegmans, Terpstra, Trentin and Vandenbergh all there.

On the subject of strong teams, Bauke Mollema (Belkin & The Netherlands) has the likes of Stef Clement and Laurens Ten Dam to back his bid. He was third on GC and took a stage in the Tour of Norway so he’ll be right in the mix on a parcours which suits him.

French ‘New Waver’ Thibaut Pinot (FDJ.fr) was 10th overall in Romandie and fifth in Bavaria (the Bayern Rundfahrt) he’ll want that progression to continue – and so will his FDJ manager, Marc Madiot this is the last marker for one which really counts, next month in France.

Peter Sagan (Cannondale & Slovakia) could just about win stage one, Tony Martin and Fabian Cancellara in attendance or not and add to his eight stage wins but; those HC’s on stage two are going to prove difficult for him. 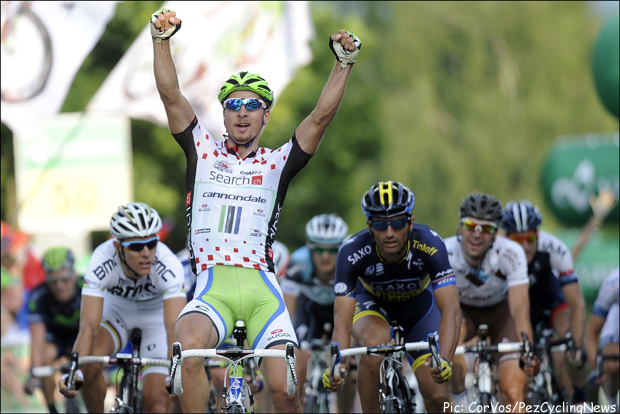 It’s been a long journey for Frank Schleck (Trek & Luxembourg) but finally he’s catching sight of some form; top 20 in Liege-Bastogne-Liege and top 10 in the Tour of Luxembourg. He just might win a stage.

Kevin Seeldraeyers (Wanty & Belgium) won’t win the GC but when the form is there he revels in races like this. He was just outside the top 10 in the Tour of Turkey and last year won two stages and was third overall in the Tour of Austria.

And finally it’s the man currently co-starring with Christopher Froome in the 2014 remake of Peyton Place (younger readers, please Google), Sir Bradley Wiggins. Wiggins produced a dominant performance in California – although we all know California isn’t Europe – and is highly motivated to start le Tour in England. 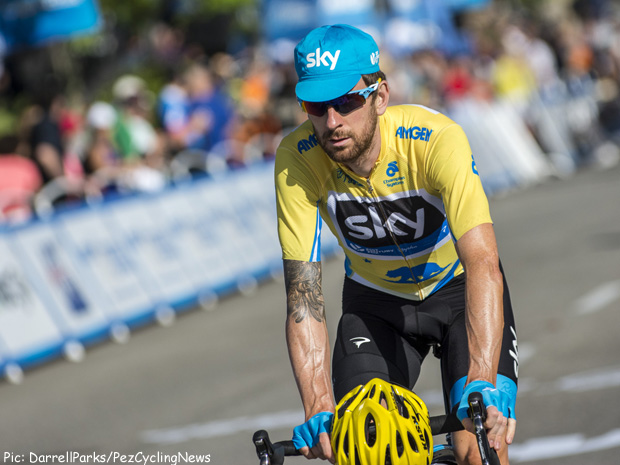 Another yellow jersey this year for Brad – at least in Switzerland?

A motivated Wiggins will make light of these Suisse parcours; the chronos are a gift and his Sky clockwork soldiers will tap out an ‘unjumpable’ rhythm on the climbs for him to use his big diesel prowess to best advantage. There’s a lot at stake here – namely Tour de France selection and the once in a lifetime opportunity a British rider gets to ride the Tour de France in his home country.

Chris Froome doesn’t want Wiggins in the Tour team, that’s for sure – he knows only too well that; ‘all for Christopher’ is how it has to be to win. Team supremo, David Brailsford knows that Froome is a better bet for Tour victory than Wiggins; he can climb better, time trial almost as well and isn’t affected by the mood swings which can make Wiggins very hard work to be around. And he knows that if he does include Wiggins in the team it’s unavoidable that there will be a divide in the team – the Brad camp and the Chris camp.

There are however a couple of big ‘buts.’

One is public opinion; there’s a strong current that ‘poor old Sir Brad’ is being wronged by that nasty Froome – ‘well, I mean, he’s not even English, is he?’ – and Brailsford. The other is the sponsor; if The Murdochs and Sky want Brad in the Tour, he’ll be on that Yorkshire start line, period. But to get into le Tour he has to put the seal on his application – victory here would make it awfully hard to leave him out. 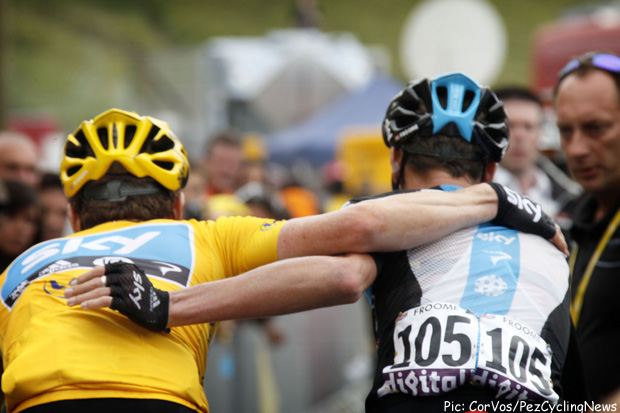 • Check Steephill.tv for viewing times across the internet.

Kritskiy second in stage two of GP Udmurtskaya Pravda, stays in the lead