It’s the most important race of the year for many, the race that stops a nation and no matter whether you call it The Tour of Flanders, the Ronde of Flanders or the Ronde van Vlaanderen it’s a superb event. Win it and you become an instant star in Belgium. Win it more than twice, a legend. Let’s take a look at this Sunday’s big race and make some predictions of who will go in the record books this year.

The parcours takes up nine pages of closely typed A4 paper; within it are 17 climbs (helling) and nine officially listed stretches of cobbles (kasseistrook) – but don’t forget that most of the climbs are cobbled – all within the 260 sinuous kilometres which make up the Ronde Van Vlaanderen – The Tour of Flanders.

Milan-Sanremo is for me the most beautiful race and the longest, but ‘de Ronde’ is unquestionably the toughest. Paris-Roubaix is brutal; but it’s pan flat. And it’s not just the climbs and cobbles of Flanders; it’s the positioning battles which precede each and every one of those technical sections. 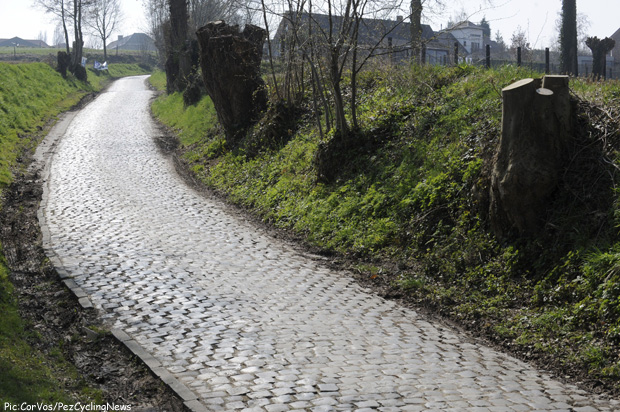 The race starts at 09:45 in Brugge’s beautiful Grote Markt – if you’ve seen the film, ‘In Brugge’ Brendan Gleeson’s plunge in the finale would land him square on the signing-on stage. The crowds gather early, the pubs and cafes burst at the seams and the worst bands in Europe belt out the Europop/folk rock/noise. The parcours head south to Kortrijk then south east to Oudenaarde – and the Flemish Ardennes. 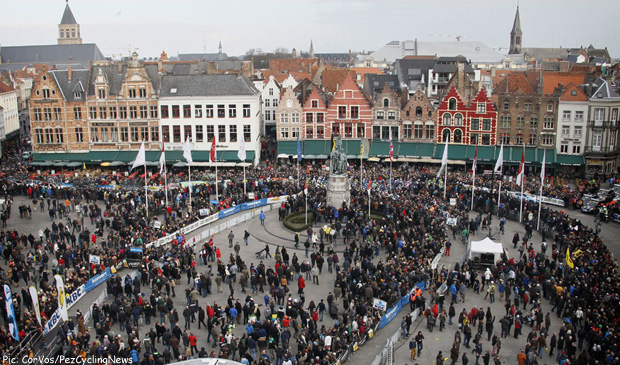 The main square in Brugge – where it will all begin this Sunday.

As I’ve written in many a preview, the Flemish Ardennes is just one ridge which is approached from multiple directions to take in the savage ‘bergs.’ These climbs are mostly Roman in their approach to routing – a straight line from the bottom to the top; there’s the odd bend but generally they’re savage, straight cobbled ramps from a bygone era.

This year there are 17, the first is the long and exposed Oude Kwaremont at 109.3 K – the route has been changed this year and I can’t help but feel that the Kwaremont’s first pass only comes this early to give all the ViP’s in the huge tented village half way up the climb, something to look at within the first couple of hours. 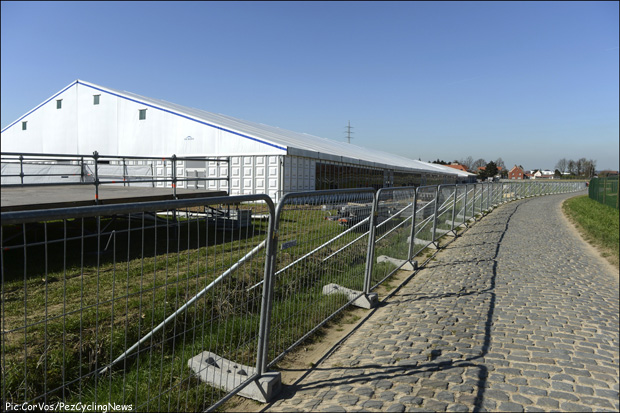 The massive VIP tent and security area getting ready for the race.

Then there’s the Kortekeer, Eikenberg, Wolvenberg, Molenberg, Leberg, Valkenberg, Kaperij, Kanarieberg, before the race arrives back at the Oude Kwaremont for the second pass at 205km.

Immediately after comes the Paterberg and at 215 K the preposterously steep Koppenberg; then Steenbeekdries, the Taainberg and Kruisberg before the final reckoning on the Oude Kwaremont and Paterberg at 243 and 246 K – the finish is now only 13 K away in Oudenaarde, home of the Ronde Museum and one of PEZ’s favourite Flanders bars, De Carillon. Many pundits still lament the loss of the Kapelmuur in Geraardsbergen and the Bosberg which camelate in the day in favour of the two Oude Kwaremont laps – but you have to think of those VIP’s and all those Euros . . .

And now the history; The Tour of Flanders was first run in 1913, promoted by Karel Van Wijnendaele, co-founder of the sports paper Sportwereld. The first winner was Paul Deman of the home country; that trend of Belgian domination continues with 68 wins to Italy’s 10 and The Netherlands nine out of a total of 97 editions.

The most recent home winner was Tom Boonen (QuickStep) in 2012 with Italy last winning thanks to Alessandro Ballan in 2007. But to find a winner from The Netherlands we have to go all the way back to 1986 and Adrie van der Poel – dad of current Junior World Road Race Champion, Mathieu – who beat Sean Kelly into second spot in a race which was designed for the tough Irishman but in which he never triumphed.

To this day, only one English speaker has ever won de Ronde, Yorkshire’s Tom Simpson in 1961.

There are four joint ‘Record Men,’ with one Italian sharing this huge accolade. Fiorenzi Magni took victory three times in the post-World War Two years to share with home riders Achiel Buysse who won three times during that conflict; Eric Leman in the 70’s; Johan Museeuw in the 90’s and Tom Boonen in 2005, 2006 and 2012. Incidentally, Boonen now also holds the record for Kuurne-Brussels-Kuurne wins on four, GP E3 Harelbeke wins on five and shares in the Paris-Roubaix record on four. 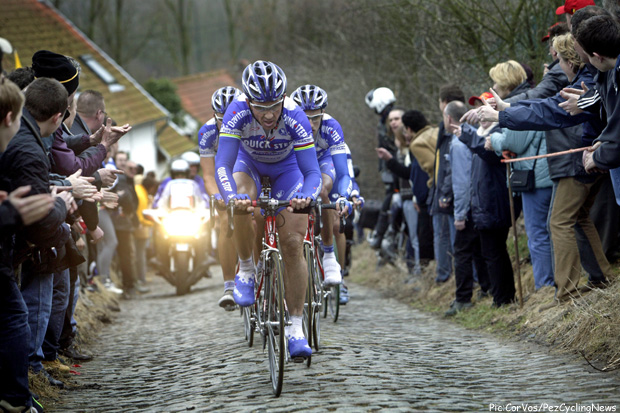 Joint record man, Johan Museeuw putting the pressure on back in ’03

When we pose the question; ‘who’s going to win?’ this is not some idle bar room enquiry – it’s a matter of national debate. Most of Saturday’s Flemish papers will have a 16 page pull out section – all of the kassein and hellingen will be analysed as if for a military campaign; the form of every favourite examined by panels of experts, and past winners will be cross examined rather than interviewed.

The ‘Ronde’ isn’t just a bike race; the population of Flanders is around six million; when I checked the race stats a year or two ago, the organisers expected 800,000 roadside – assuming that 50,000 were foreign spectators – that’s 12.5 % or one in eighth part of an entire nation standing beside the road to watch a sporting event. But facts and figures can’t convey what Flanders is like on the Sunday of the Ronde – if you’re a serious fan then you must go, one day.

But back to the key question of whose name will be heard most often in the bars of Flanders on Sunday night.

This preview was written on Tuesday night after the first stage of The Three Days of De Panne so there may be late changes to the start sheet and a rider may pop up with super form on the second day at De Panne; but the names below should not change significantly.

Super Favourites:
The man we’ve already mentioned twice above – Tom Boonen came back with a ‘bang’ in 2014 after a 2013 compromised by injury and illness. There were another two stage wins in the desert winds of Qatar and a record setting fourth victory in Kuurne-Brussels-Kuurne. 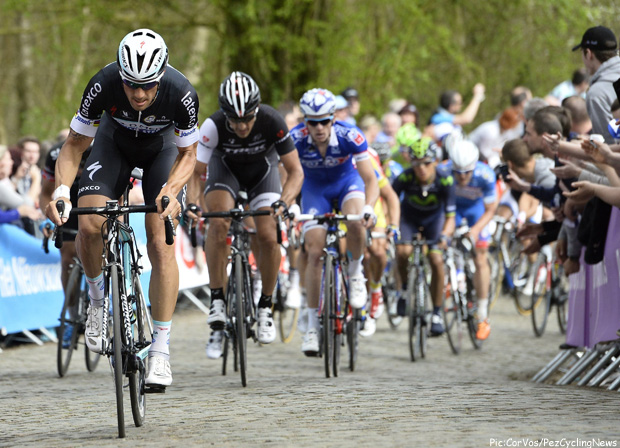 But personal tragedy in the form of the miscarriage of his first child meant there was no Primavera for the charismatic Belgian. Last weekend’s Ghent-Wevelgem removed any doubts about his motivation and fitness however when he was right there in the finale but baulked by one of many crashes which marred the race: 9.5/10.

Even as we pen this, the news arrives that Slovakia’s Peter Sagan (Cannondale) has added another win to his burgeoning palmares – and what’s so easy to forget is that this young man is only 24 years-old with potentially ten years of career or more ahead of him. Despite stage wins in Oman and Tirreno his 10th place in Sanremo was noted with sage remarks that; ‘he’s not on the same form as last year.’ But with a win in the E3, third in Ghent-Wevelgem and another at De Panne it very much looks to us that he’s tuned his form to perfection for de Ronde and next Sunday’s Paris-Roubaix: 10/10

The fact that he left it to a sprint in the Primavera speaks volumes about Fabian Cancellara’s (Trek & Switzerland) self confidence; and his display of power in the E3 after being caught behind a crash leaves us in no doubt as to his form. He’s won twice here so has the experience as well as the confidence and motor: 10/10. 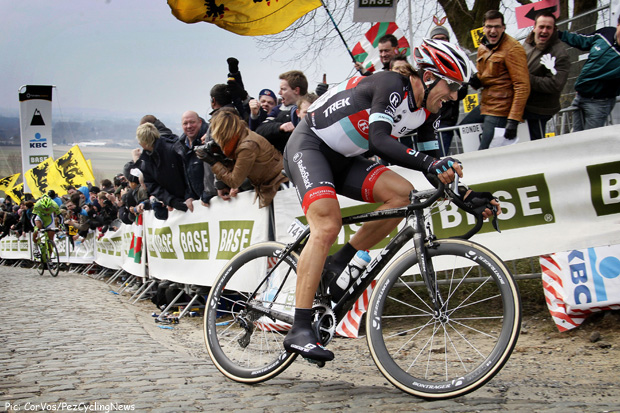 On the up:
Germany has won the Ronde twice, with Steffen Wesemann in 2004 and with Rudi Altig in 1964 – on another year which ends in a ‘4’ could John Degenkolb (Giant) make it three? ‘Hot’ in all of the early season French races, including Paris-Nice where he also took the points classement he was denied by a late puncture in Sanremo but was rampant in wining Ghent-Wevelgem. With sky high confidence and a strong team, he’ll be there: 9/10.

There has only ever been one Scandinavian winner in this race, classy Dane Rolf Sorensen in 1997. Can Katusha’s Norwegian hard man, Alex Kristoff make it two? – after his brilliant win in Sanremo he has to be taken seriously and remember that he just missed the podium here, last year: 9/10.

The man of the first weekend of real racing – Het Nieuwsblad and Kuurne-Brussels-Kuurne – where he finished fourth and third respectively was Belkin’s Belgian home boy, Sep Vanmarcke. Since then he’s been fifth in the E3 and fourth in Ghent-Wevelgem – his aggressive style is highly suited to a race which favours the brave, 8.5/10. 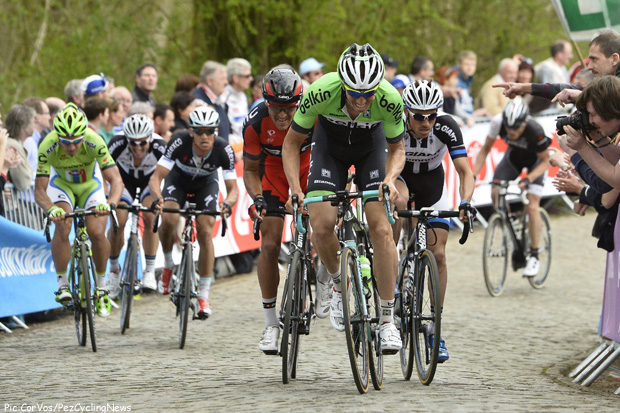 His form has been excellent all year, under lined by his occupying the third podium spot in E3, Welshman Geraint Thomas (Sky) has to be considered – if only he would stop crashing. 8/10.

The man who was second, just ahead of Thomas but behind Sagan in the E3 was Dutchman Niki Terpstra (QuickStep). He got off to a flying start, winning a stage and the GC in Qatar, impressed in Het Nieuwsblad, won Dwars Door and then there was that second spot in the E3. His form and reputation allow QuickStep to play the tactical game – no other team can let this man get too far up the road: 9/10.

Possible podiums:
These are the guys to underestimate at your peril. He’s harder than hard and has the wits of a fox on cognitive enhancing drugs, Luca Paolini (Katusha & Italy) chaperoned Kristoff to the Sanremo triumph and gets stronger as the years go by – another best not to let get up the road: 8/10.

Somewhere there must be a picture of Greg Van Avermaet (BMC & Belgium) smiling – maybe on team ‘hero’ cards or when he won Paris-Tours in 2011? He was second in the horror that was Het Nieuwsblad and top ten in the E3 – he was seventh here last year and will certainly wish to improve upon that: 7.5/10.

But with ‘Chava’ – Sylvain Chavanel (IAM & France) there’s always a smile. His move to team leadership at IAM perhaps hasn’t brought the results he would have liked, with a best of fifth in Dwars Door; but he has huge experience of this race with a best of second to Nuyens in 2011 and loves the cobbled classics. 7.5/10. 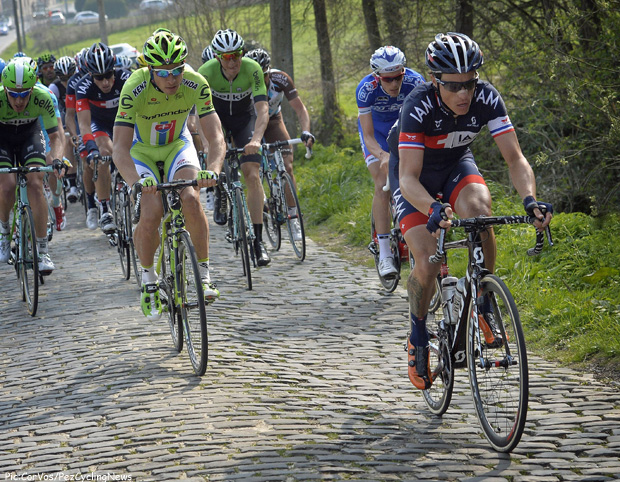 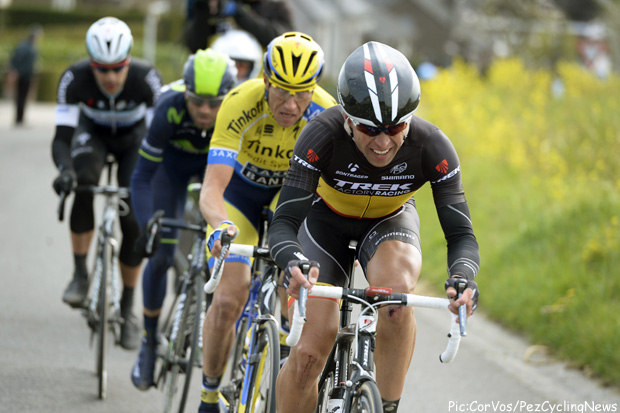 Last year we saw green shoots of recovery – after a fallow year or two – from the man with the power lifter thighs; he played a key part in Cancellara’s Ronde win and took another Belgian Elite Road Championship. In last weekend’s Ghent-Wevelgem he was immensely strong; the other teams cannot let him go clear and his presence hugely eases the pressure on Cancellara. But it’s possible for Stijn himself, we think: 9/10.

For Sunday you require: a TV/computer, a supply of Belgian beer, a start sheet and PEZ. Get to it! 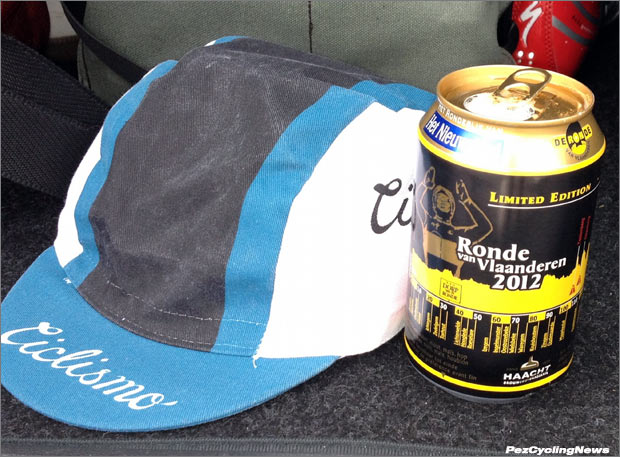 Lotto Belisol: VIP driver Eric Vanderaerden about his victory in Tour of Flanders 1985