Ed Hood pulls out his crystal ball, the form guide and anything else that he thinks will see him successfully predict the winner of his 3rd straight Grand Tour as he analyzes the race route and the contenders and the pretenders of the 68th Vuelta Espana.

If you’re a sprinter it doesn’t read well – 13 mountain stages with 11 mountain top finishes taking in 39 mountain passes or major climbs; one team and one individual time trial. There are six opportunities for the men with the fast twitch muscles but some of those aren’t clear cut and could well go to the breakaway.

But if you’re a climber – and especially if your name is Rodriguez – it’s a parcours made in heaven.

The race starts up in the far north west of Spain – Galicia where the seas are wild and tourists are still thin on the ground. The Stage One is a TTT with the first hill top finish coming as early as Stage Two. The race spends five days in the north east before two stages which head due south through the barren plains skirting the Portuguese border to take it down to the southern-most tip of the country. 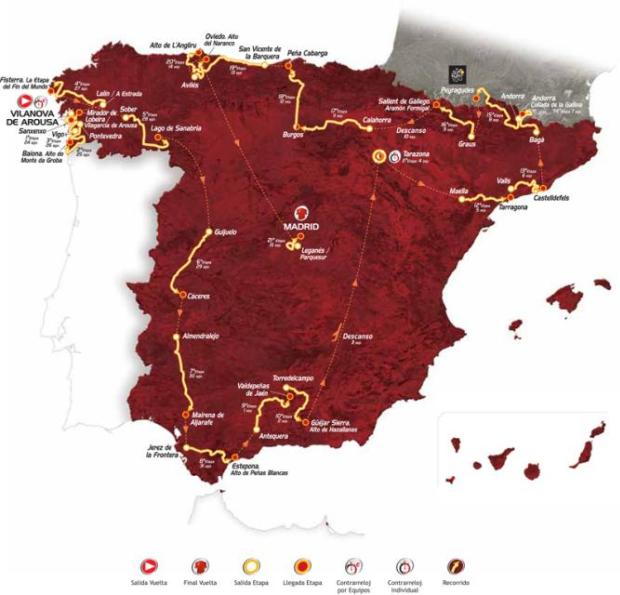 There are three stages in the south before a long transfer up to Tarazona for the time trial – 38 K with a third category climb in the middle. Two stages on the north Mediterranean coast are the prelude to the Pyrenees where there are three days of pain before two stages via the ancient city of Burgos take the race back to the Bay of Biscay. 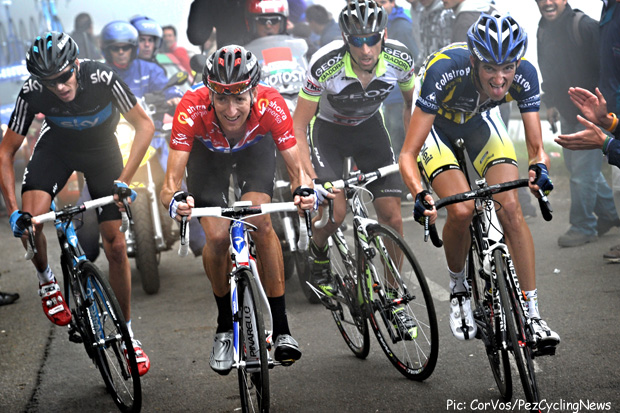 Bradley Wiggins struggles up the Angliru in 2011 wearing the leader’s red jersey.

Two savage days – climaxed with the horrific Alto de l’Angliru on stage 20 are followed by the one true sprinter stage into Madrid after another long transfer. When the race date was changed from spring to autumn the thought process was for shorter, faster stages and a parcours that wasn’t too savage given that it’s a long, long season for professionals in the 21st century.

However, that notion has been thrown out the window and the ethos seems to be to create a brutal parcours which attracts a lot of attention from the Media. In that they’ve succeeded, but a well balanced race? – I think not.

I’ve had a good record on winners this year correctly tipping Vincenzo Nibali (Astana & Italy) to win the Giro and Christopher Froome (Sky & GB) to win le Tour – albeit I wasn’t so clever at predicting the other podium places.

The first thing that has to be stated is that in an age when the top riders base an entire season on two or even one period of peak form it’s going to be very difficult for anyone who rode the Tour de France to win the Vuelta.

Take the Belkin Netherlands duo of Bauke Mollema and Laurens Ten Dam – a brilliant start to the Tour faded and they had to go very deep just to finish. It’s unlikely either man can lift himself mentally and/or physically to ‘do a ride’ in the Vuelta. 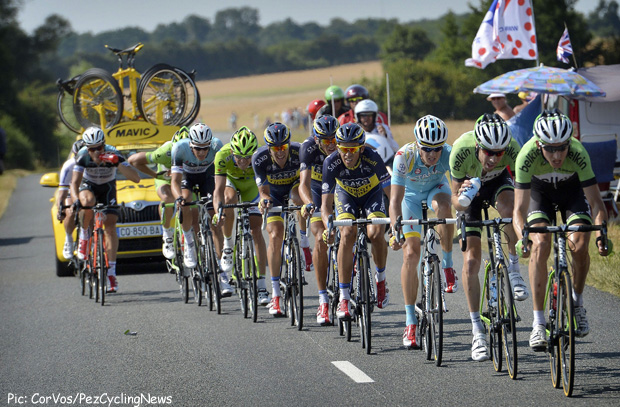 Similarly, Tour stage winner Dan Martin (Garmin & Ireland) will be targeting a stage win – not the GC. And whilst Roman Kreuziger (Saxo & Czech Republic) rode an excellent Tour in the service of Contador, he can’t win here; apart from the physical aspect he’s not a rider who revels in being the head honcho – his ‘right hand man’ role for Contador suits him perfectly.

But two men who did ride the Tour and will have GC ambitions in the absence of Grande Boucle stars Froome, Nairo Quintana (Movistar & Colombia) and Alberto Contador (Saxo & Spain) are home boys Joaquin Rodriguez (Katusha) and Alejandro Valverde (Movistar).

Rodriguez rode himself into form in the Tour and with a brilliant piece of riding on the penultimate day deposed King Alberto and grabbed the third podium spot behind Froome and Quintana. But here’s the ‘but’ – all of that is still in his legs. 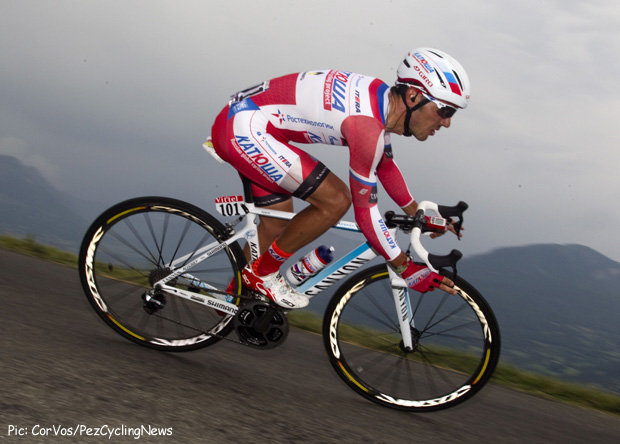 If you talk to many Tour riders they’ll tell you that for a week, or maybe even two weeks after the race they’re completely wasted and there’s simply not enough time between the Tour and the Vuelta to rest, ramp up, taper and peak again between the two races. However, I didn’t think Rodriguez could make the Tour podium and he proved me wrong on that – but he won’t win this Vuelta.

For me, Valverde is the more likely prospect – his Tour GC prospects were blown out of the water when a routine wheel change coincided with echelon specialists QuickStep and Belkin ambushing the peloton and giving us a brilliant day of bike racing. But not so brilliant for Valverde who despite the best efforts of his Movistar boys couldn’t get back on terms.

Valverde didn’t go as deep as Rodriguez and knows that but for his being caught out in the cross winds there’s a very real chance he could have made the Tour podium. His motivation is strong and he’s a master of finding form ‘on the day,’ – he won’t win but could well make the podium. 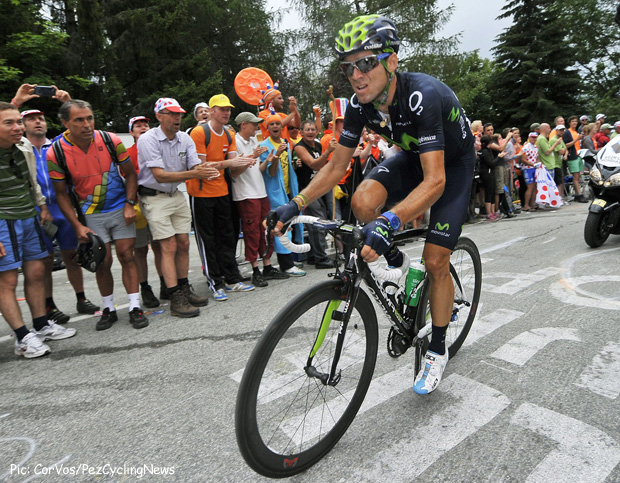 The last of the Spanish favourites is a man who it’s hard not to like; he’s grounded, human, aggressive and one of the best descenders in the world – the peloton will be the poorer in 2014 without him in the orange of Euskaltel, Samuel Sanchez. From where I’m sitting a podium seems unlikely but it’s unlikely too that he won’t want to give the Euskaltel orange masses on the high passes a ‘going away present’ in the shape of a stage win.

There are three other nations in the hunt; let’s start with the most unlikely – Poland. Saxo’s Rafal Majka is just 23 years-old but was seventh in the Giro then won the points classification and was fourth overall in his home tour – look for that progression to continue with a top six ride, especially if Kreuziger slips into the role of super domestique for him. 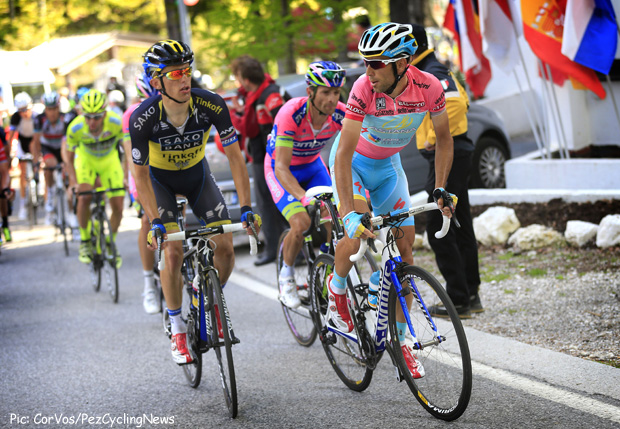 Vincenzo Nibali kept a close eye on Rafal Majka in the Giro earlier this year and he may have to do it again in Spain.

And if you remember the 80’s with Florez, Herrera, Parra, Wilches and all the rest then there’s a bit of déjà vu creeping in with those dark skinned boys from the high mountains of Colombia again making their mark. AG2R are having an excellent year and one of the constituent parts of their success is a certain 23 year-old Colombian named Carlos Betancur – third in the Fleche, fourth into Liege and fifth in the Giro as well as best young rider. To use the cliché he’s ‘one to watch’ – and a podium is possible for the man with the 12 year-old schoolboy body grafted on to Chris Hoy’s legs.

And if one Colombian is good, ‘then we’ll have two, please’ – you’d expect nothing less from David Brailsford and his mighty Sky operation. Nominated team leader for the men in black is Sergio Henao – we’re not sure if this is because his haircut is tidier that team mate Rigoberto Uran’s or because the latter is jumping ship at the end of the year. 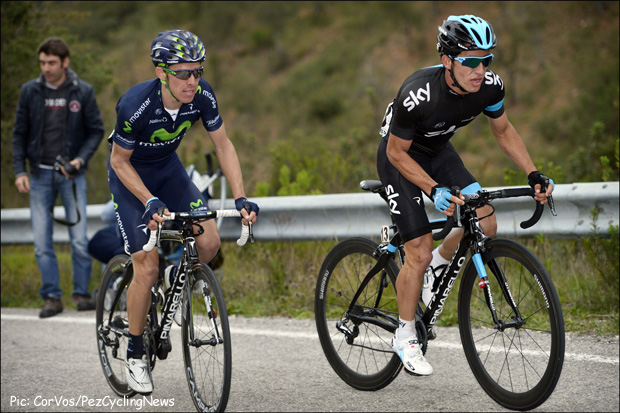 Henao has had a good year with stage wins in the Algarve, Pais Vasco and the TTT in the Giro. He was second in the Fleche, sixth in the Amstel and top 20 in the Giro in the service of Uran. We’d say Uran was a better bet but Mr. Brailsford doesn’t often get it wrong in stage races. Uran is a very versatile bike rider – a former track rider, strong and opportunistic he’s building an excellent palmares. After closing the 2012 season with a win in Piemonte he was already in the top 10 in the early season Majorcan races this year. His Giro was a triumph, a TTT win to go with his solo mountain stage win and second on GC – enough said. He’s been quiet since but with Henao he gives Sky two aces up their sleeve.

Ivan Basso (Cannondale), is this that dreaded ‘one season too many’ for the genial man who’s been around forever? The next three weeks will tell us – but the brutal parcours which will play out like a giant roller coaster elimination could well suit his monumental diesel strength. However there are too many young guns on the way up for Ivan to muscle on to the podium we feel.

Michele Scarponi (Lampre) the man who defines ‘grinta’ – even though we don’t like some of the company he keeps – was fourth in the Giro. If he’s in shape then the dour ever upwards parcours will suit him – he’s good at not losing time but we don’t see a podium.

Domenico Pozzovivo (AG2R) had a stellar 2012 with a string of quality rides in Italian semi-classics a Giro stage win and eighth place on GC. This year he scraped into the Giro top ten and just hasn’t sparkled in the same way – perhaps it’s another unhappy Italian rider on a French team marriage? However, he was top ten on GC in Poland and we see him as a handy weapon in the AG2R Betancur offensive.

And finally the man who we think will win – Vincenzo Nibali (Astana) with wins in the Tirreno, Trentino and the Giro it’s been a fabulous season for ‘The Shark of the Straights.’ And he called into question his own statements about, ‘being tired at the end of a long season’ when he took third in the recent Vuelta Ciclista a Burgos – and that was after riding hard to help team mate Simone Ponzi win a stage. 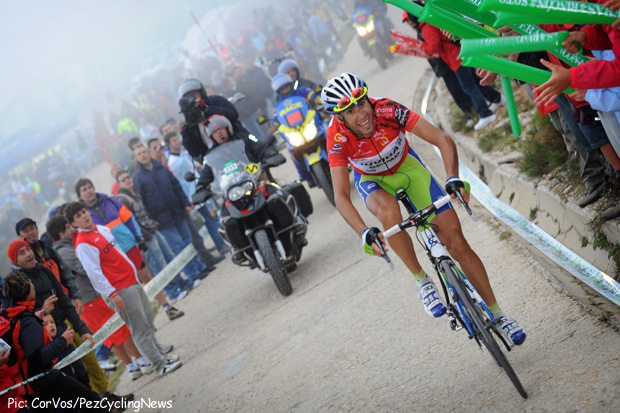 He was Italian junior road race champion in 2002 and since then his progression has been a straight, upward line on the chart. Given that this will be his last Vuelta for a while – his focus changes to the Tour for 2014 – he’ll want to go out in style.

Nibali to win from Valverde and Betancur. 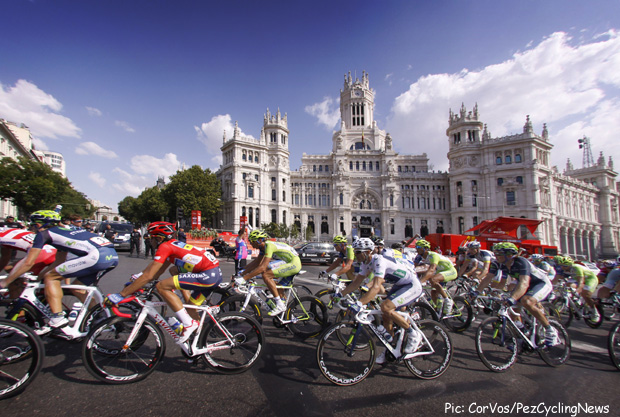 Nibali wearing red in Madrid in September? Ed, seems to think so.