Tour de PEZ St.12: The climb to HC category ski station at Chamrousse is the capper on the Tour de France’s first day in the Alps. I saddled up for a closer look on two wheels at the stage 13 finish, and find out who’s already set up camp.

While today’s stage from Bourge-en-Bress to Saint Etienne promised – and delivered – a finish for the sprinters, we took the day to point straight at Grenoble, and the chance to ride the climb to Chamrousse. We’re smack-dab in the French Alps now, and caught glimpses of Mont Blanc on the drive down from Geneva this morning. 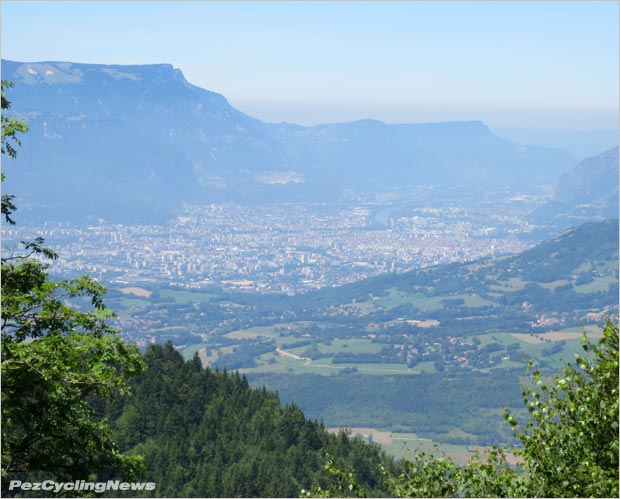 Looking back to Grenoble from the climb to Chamrousse.

My original plan was lofty – riding both the col de Palaquit (Cat.1 14km @ 6%) before the 18km 7.3% climb to Chamrousse over a 60km distance, but one thing you learn on Tour is that biting off less than you can chew is usually the best option. 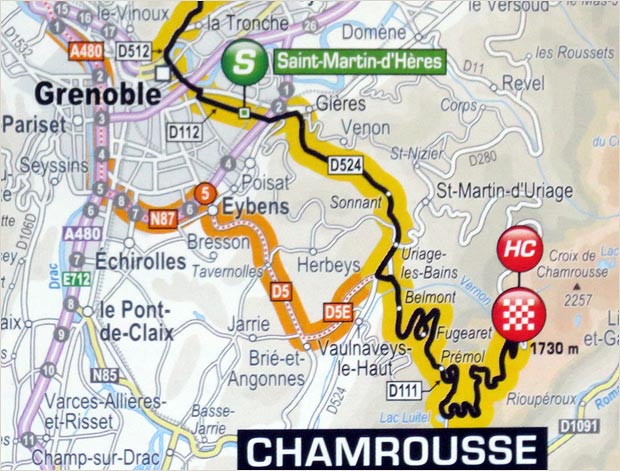 My climb up took about 3 hours – the pros will do it in about 1 – and was a lot of time spent in my bottom gear. The day was already at around 30C degrees when I started in the town of Gieres at 27km to go, but in my ongoing battle with Mino’s gps, we blasted off in the wrong direction, adding about 3 more km to my day. This was not about logging big miles – nosirree Bob – it was about checking out the climb, taking some photos, and hopefully meeting some folks on the way up. 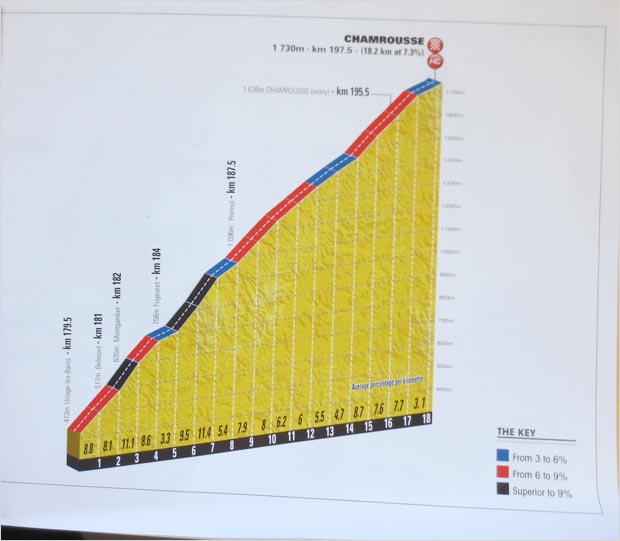 General Outlook
This is a nice climb on well surfaced roads, but for the cyclo-tourist it bears noting that most of the climb is in forest, and views are minimal. That’s not to say they’re completely missing, as a few vantage points offer some pretty stunning views of the valley below, and the bustling city of Grenoble (pop. 160,000). 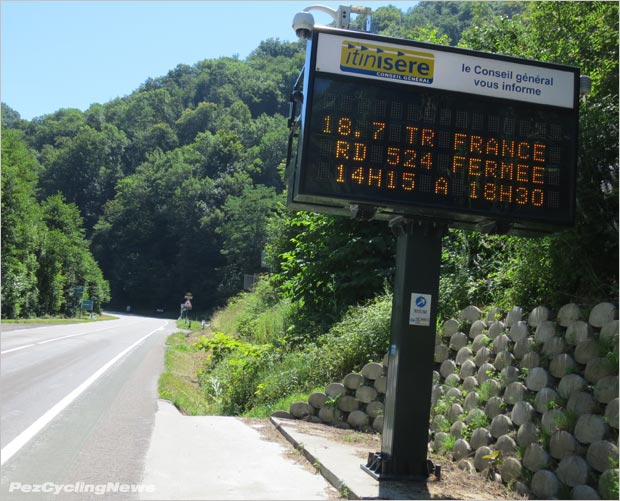 The climb has featured in the Tour before – for a TT in 2001 – just don’t ask me who won it as we all know records from that decade are – well… confusing. 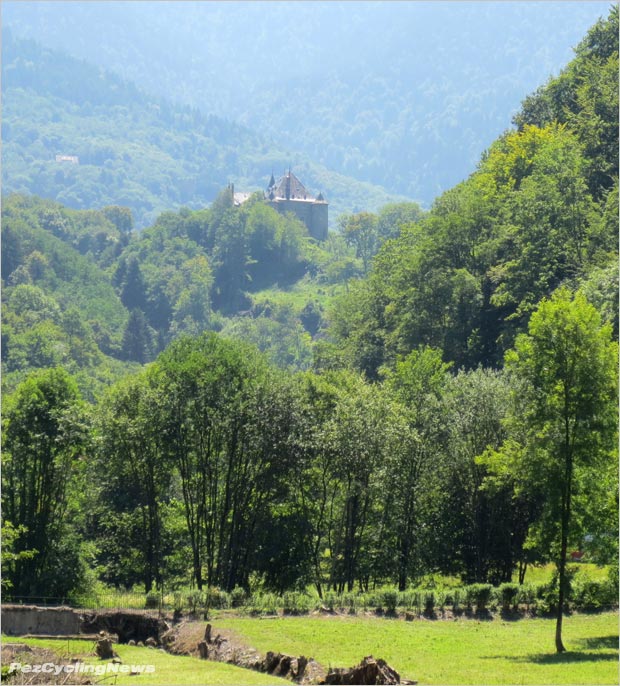 After the ceremonial coffee to start (and my only other fortification for today’s ride was a banana – simply too hot for anything stronger), I peeled out at the crack of noon – nothing like digging in to the hottest part of the day… 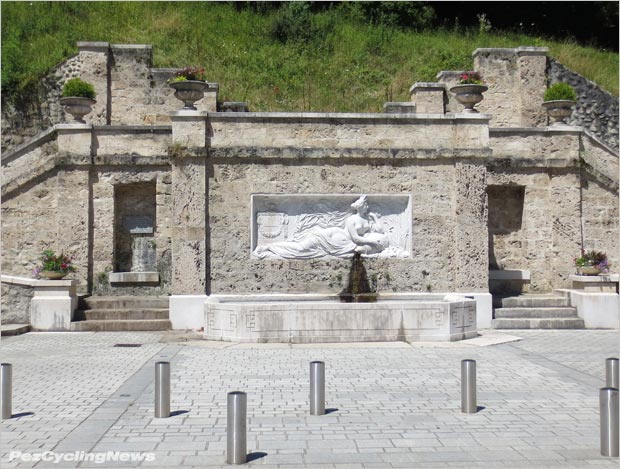 There’s a few kms of gentle rise here leading to a left turn that signals the start of la Chamrousse. It’s a small road and is filled with traffic, but the spa town of Uriage-les-Bains offers up some nice atmosphere and a couple of good photo ops. 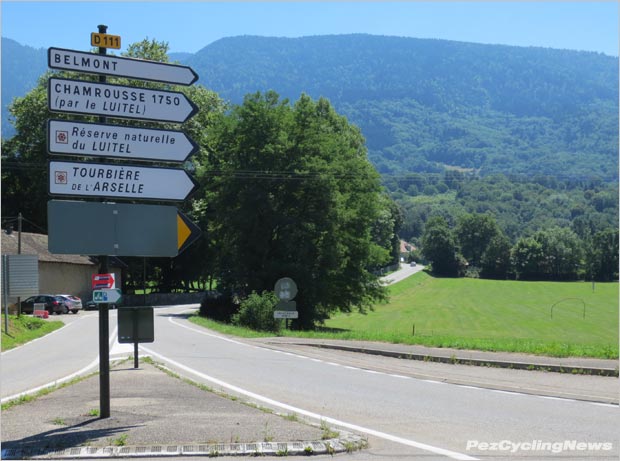 A couple kms later – just past an unexpected golf course – you hang a left and the climb begins immediately. I’m loving how these Euro-climbs all begin with such declarations – 8% straight up.

I kept waiting for someting to happen on the lower slopes – maybe some interesting villages, or nice views – but it was pretty much all business – the first 4kms read off like this: 8% avg, 8%, 11%, 6%, then a very brief 3% respite along km 5. 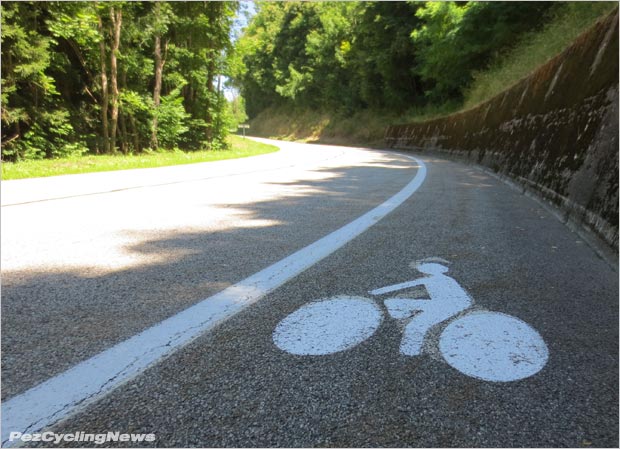 Some forward thinking local council has designated a bike path most of the way up.

I noticed the heat right away – it was warm, and windless – sort of like putting your trainer in a 30C degree room and cranking up the watts… for a while. This went on for some time, and the screw tightened over the next 2kms of 9.5%, then 11%. 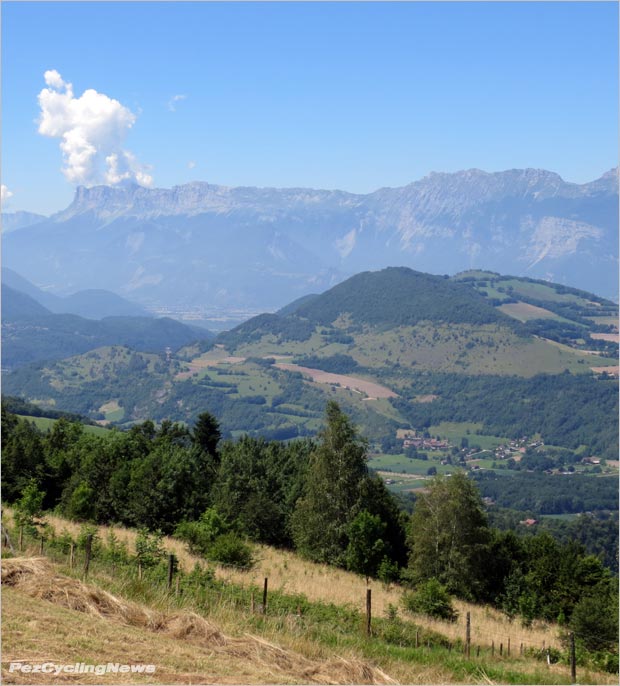 There’s a brief flat section about half way in a place called Premol – but other than a bunch of campers and a pretty still looking pond, I’m not sure if there’s a town here or not. No matter, it’s onwards we go. 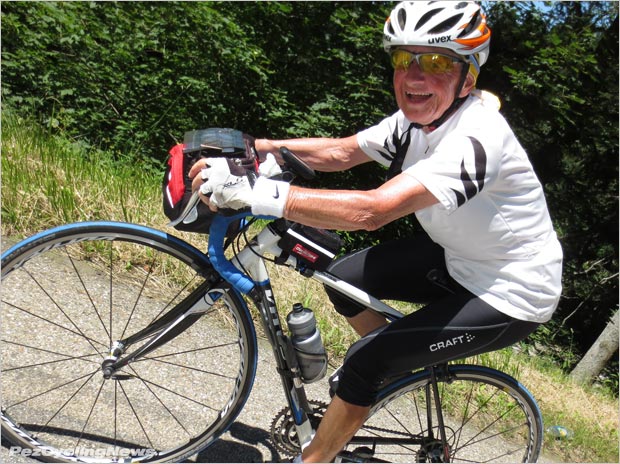 In the distance I see a lone figure churning out a pace not much slower than mine. It’s hot and I note the knickers. Some meters later I pull up beside Bernadette – a cheerful French woman, who’s obviously still full of life. We attempt a brief conversation and then bid each au revoir. 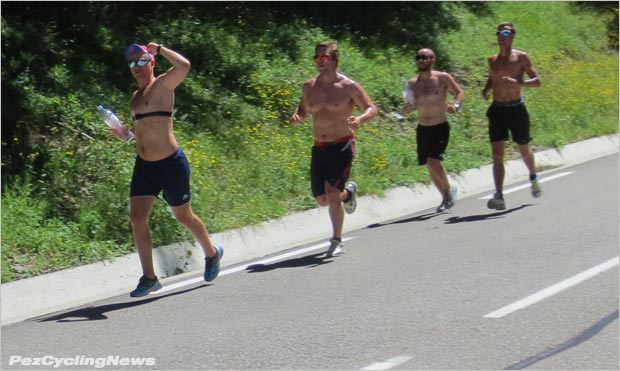 By now I was about an hour in and starting to feel the grind. Some runners jog past down on the way down, or did I just imagine that? A cool stream presented itself so I stopped for some cool water, and shortly lost my rythm. Luckily Mino had stopped for a few pics and I was able to regroup with a banana, and swap out the helmet for a cap with Mrs. Pez’s words “Be careful” echoing in my ears. 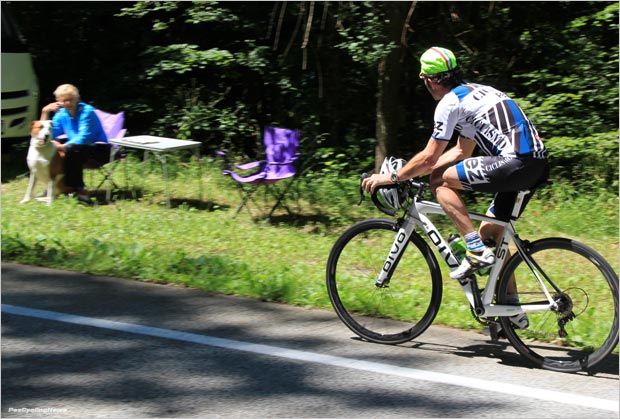 The climb goes on like this for the next 5km, emptiness until I started seeing signs of life at the switchbacks of the final 4km. Groups of campers had collected themselves – sorted by country – the Belgians, the French, even an English crew was here. 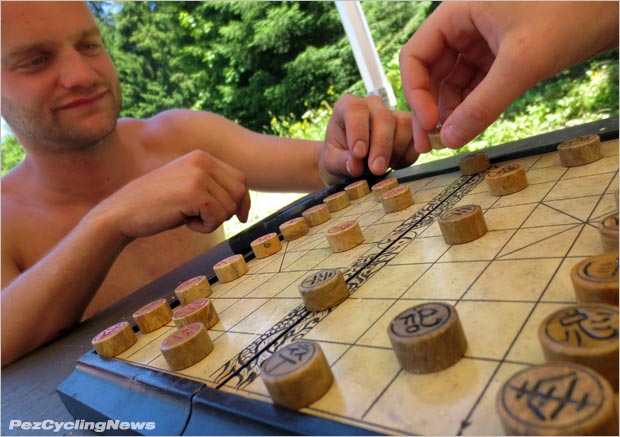 At last – signs of humanity – and welcome relief from talking to myself for the past 90+ minutes. I look for some folks who might speak English- or Italian, and say hello – which also provides a good reason to stop. I talk to Alex & Eddie, flying a huge Danish flag, so I assume they speak English. They’re figuring out the rules for Chinese checkers off the iphone, and are actually both French but have set up their version of a retro ’80’s camp directly across the from a battalion of French super-campers. They thought the Danish flag was a good way to to take the piss outta their rivals. 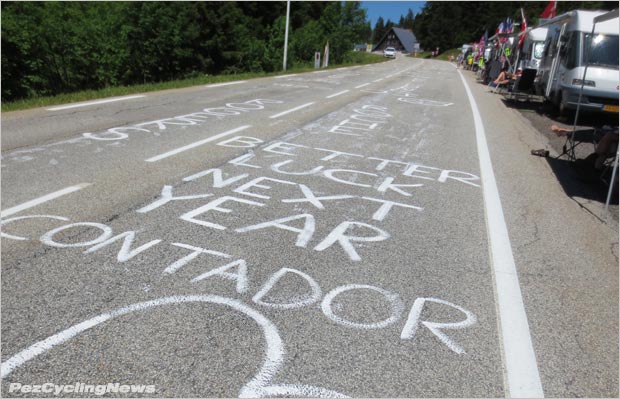 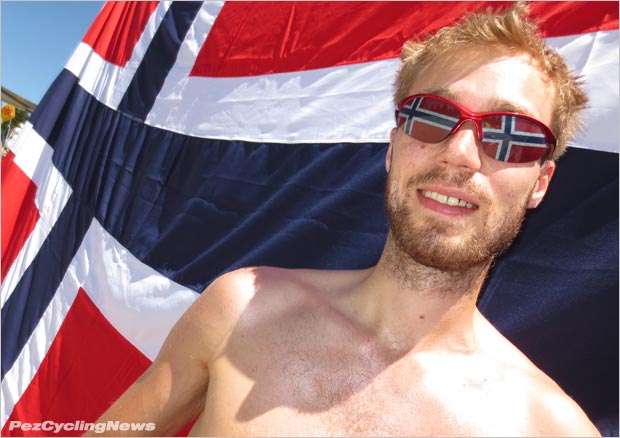 Joacuim is Norwegian – and another likely candidate for a common language. He and a couple buddies rented a camper two days ago in Germany, and will chase the Tour for the next two weeks through the Pyrenees. Some good times ahead. 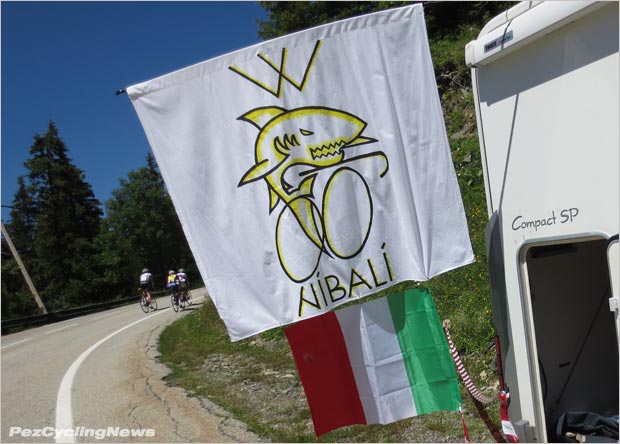 I find a lone Italian supporter – a fit looking woman about 50-something, well tanned and catching more rays in a lawn chair. She admits she’s really a Contador fan, but with him out, had to switch allegiances on account of making a banner. 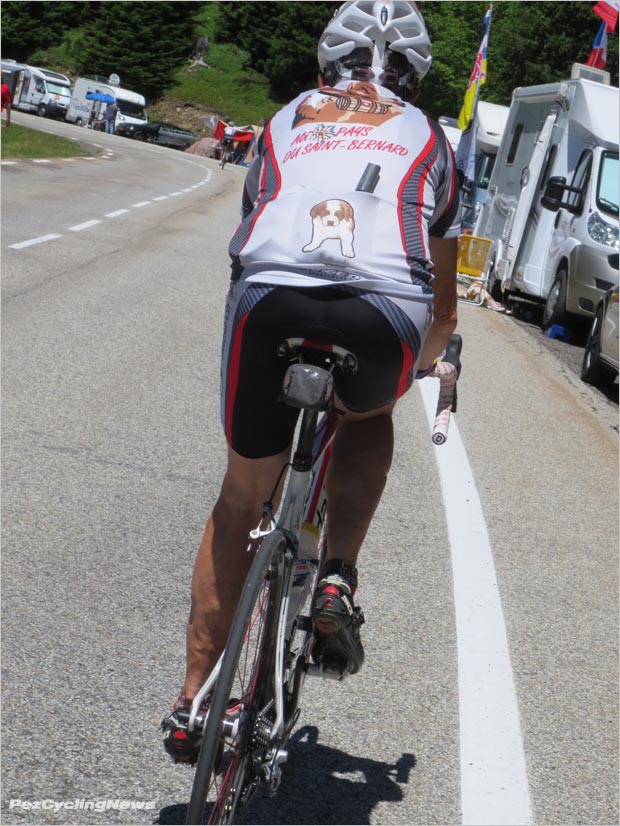 Then this guy passes me – easily well into his sixties, and at least 3 gears higher than I am. I speed up to snap this pic. Later, on my way down I pass him again near the bottom… he’s heading back up. There’s hope for me yet. 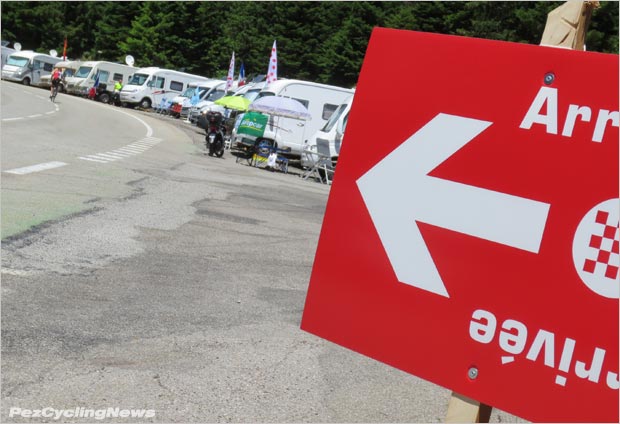 Up top is the ski station used for the 1968 Winter Olympics – there are a few people around – summer hikers, the odd face staring out of a hotel window. But it’s way quieter than I expected. The Tour crew has just arrived – the barrier guys are unloading, and the various signs are posted for parking, press, arrival. 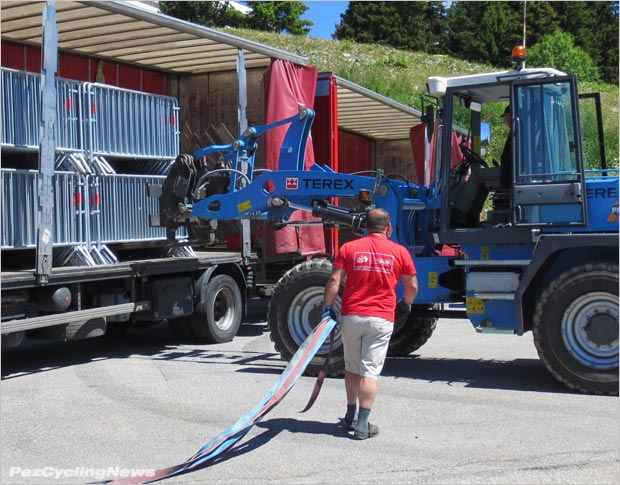 By now the big showdown between Froome, Contador, Nibali, Talansky, van Avermaet and others is a non event – can anyone remember this many GC big boys crashing out of one Tour? But the racing will be classic Tour de France – it’s hot, the Alps are stunning, and these climbs will be as fun to watch as they are punishing. 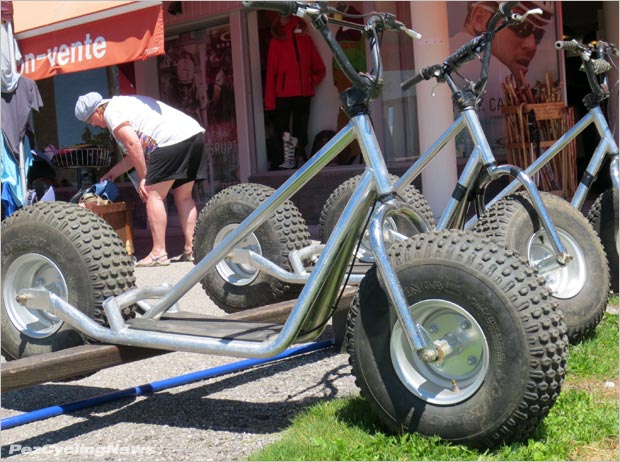 Thanks for reading and see you tomorrow ~
– Pez