PEZ Takes On The Ventoux!

Mt. Ventoux, it’s a mythical place, steeped in Tour de France history and the site of many great battles over the years. Remember Armstrong vs Pantani in 2000? Or Eros Poli in 1994 when he lost 15 minutes on the mountain but still won the stage. For 2013 we can add another battle to the history books as PEZ’s own Chris Selden took on 30 other journos from around the world in climbing Mt. Ventoux last week.

Ok, so I’ll admit there wasn’t a Pantani or an Armstrong in our group but there was some seriously fit looking guys. Why were 30 journos all at Mt. Ventoux at the same time with bikes? This certainly wasn’t the time of year for the Journalist Worlds, nor the typcal circuit style race that that involves, it was in fact a product launch for Polar Heart Rate Monitors and their new RC3 GPS Tour de France unit. 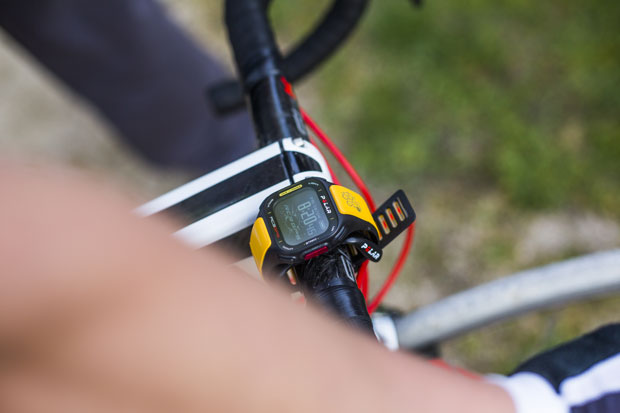 The little yellow beast that brought 30 journos to the Ventoux.

Was it necessary to invite everybody from around the world to Ventoux to check out the new unit? Absolutely not. Was it fun? Hell yeah! If riding up a mountain at full gas for 1hr 30minutes or so is your idea of fun – and it is mine – this was a seriously fun, and seriously painful product launch. I’ll write some more on the RC3 when I’ve had more than just a painful ride up a mountain to test it but today it’s all about the Ventoux. 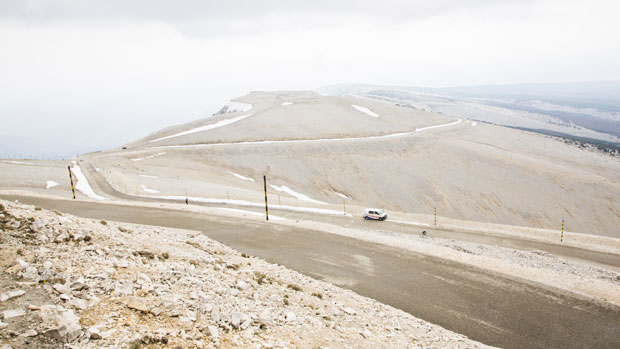 Now the Ventoux’s mythical for a good reason – it’s a beast. Steep, unforgiving and most of all ridiculously long. I’ve ridden pretty much all the Alpine climbs in France & some much steeper climbs in the Dolomites in Italy but Mt Ventoux is something special again and easily rates amongst my top 5 climbs of all time. Talking to FDJ pro, Jussi Veikanen the day before my ascent he said the same to me, ranking it as the hardest climb in France. He was even kind of thankful that he most likely wouldn’t be riding the Tour de France this year with its crazy stage on the 14th July of 242km which will finish on the summit of Ventoux.

Before riding up the mountain though I had to get myself a bike and the guys from Polar had helpfully provided a beautiful range of LOOK bikes for everyone involved. Everyone that is except me as my bike had somehow not been ordered or organized or I don’t know what. So whilst the other journos were getting themselves set up on their machines and getting saddle heights and cleat positions set I was sidelined with the promise of a bike turning up before the next morning’s ride.

It was no hassle though and a lack of bike gave me time to relax after my drive to the Polar base camp at Bedoin earlier in the day and just soak up the April sun which was thankfully shining bright. Before I knew it though the sun was getting lower and it was time to think about the second most important thing behind the bike – food. As any bike rider knows a good dinner the day before a big ride is important and the guys from Polar helpfully had us covered with a dinner organized at altitude – 2/3rds of the way up the Ventoux at the Chalet Reynard. The good and bad thing about this was that we got to drive up the mountain to dinner and see what was ahead of us the next morning. Some normally talkative journos turned quite silent after the drive up as some of them saw for the first time what an impressive mountain Ventoux really is. From the base town at Bedoin we were to take on the 1617m of climbing in 22km and an average gradient of a very painful 7.43% but with a much higher gradient as you get further up. 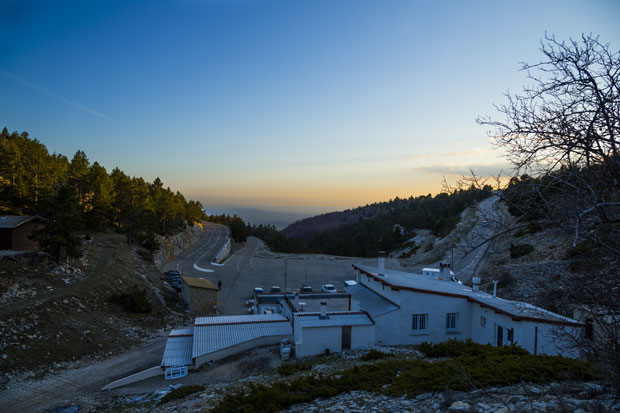 The view from just above the Chalet Reynard before dinner.

I had some memories of the climb having raced it almost 10 years ago so I knew what to expect, but seeing it again in the car that night put some doubts in my head and some butterflies in my stomach. The anxiety left me though a few hours later as our group of journos descended the Ventoux after dinner via the forest trails in the middle of the night on some borrowed MTBs. MTBing in jeans and casual shoes at midnight with just one small headlamp to light the way was certainly an interesting experience. Scarily interesting. 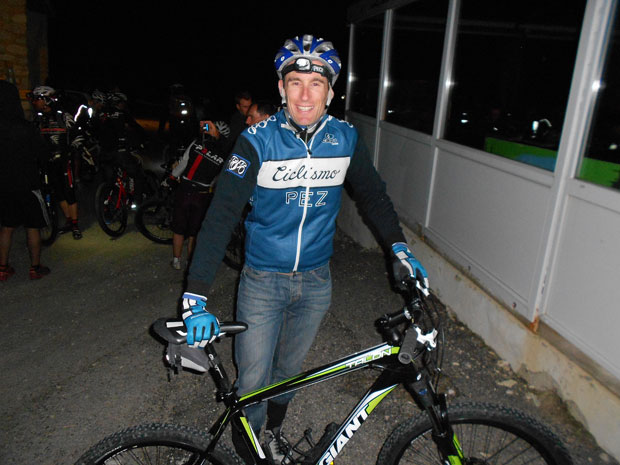 Me getting ready to plunge off the mountain with just a small headlight to light the way. 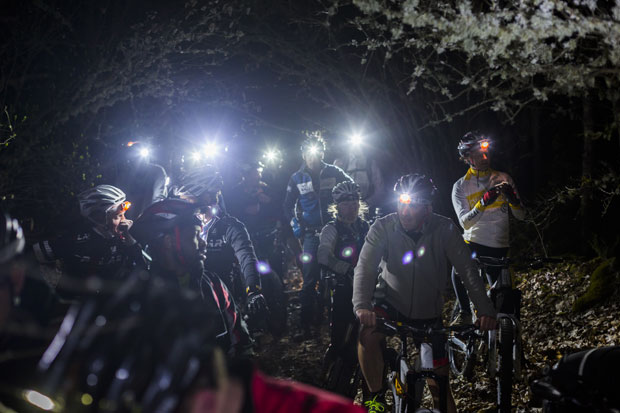 The guides hired for the occasion did a great job of keeping us all together and upright, stopping regularly to check that we hadn’t lost anyone…….like your trusty PEZ journo – I only got lost twice!

With the MTBing out of the way and that pesky thing called sleep almost not needed it was just a few hours later when our crusty band woke up, had some quick breakfast and jumped on the machines to pedal up Ventoux. The Polar guys had commandeered me a bike from the local bike shop and although it was a LOOK it wasn’t quite as classy as the other machines on display, though it did however have a highly practical – if somewhat uncool – triple chainring that I was sure to use.

So 50 meters around the hotel carpark as a warmup to check the seat height and we were away! Yes, my preparation wasn’t exactly top. That didn’t matter though as with some recent racing under my belt I was hopeful that I’d handle myself ok. The PEZ himself had given me the fatherly advice that I’ve come to expect from him two days earlier – ‘Don’t embarrass us and kick some ass.’ 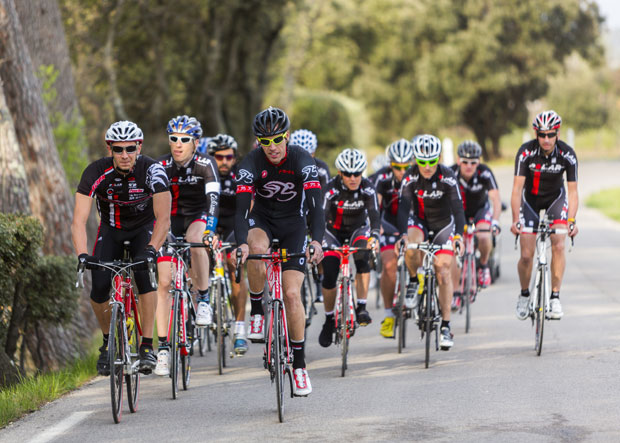 The group stayed mostly together on the lower ‘easy’ slopes. That’s me in 2nd wheel with the PEZ armwarmers on seemingly licking my lips at what lay ahead…

With PEZ’s words ringing in my mind at the bottom of the climb, I didn’t hesitate to jump on the wheel of a rather “Wiggo-esque’ looking Dutch journo who put in an early attack. We were soon clear of the peloton but if my legs and lungs weren’t screaming at me enough I also had the aid of technology on my side with my Polar RC3 GPS telling me that with my heartrate at these levels I would have absolutely NO chance of completing the 22km climb.

With that bizarre inner voice called reason that I normally don’t listen to also screaming at me to slow down, I decided to actually slow down and watched as the Dutchman and then a Spanish Alejandro Valverde look-alike ride clear away. My slowing of the pace let an Englishman from a certain rival website catch back up, along with our guide Matthieu who rides this mountain everyday of his life and a Frenchman to make a nice group of 4.

I settled into a painful but steady enough to maintain rhythm and started to enjoy this climb for what it was. It’s one of the most mythical climbs of the Tour de France, the scenery change from the forest down below to the lunar landscape after the Chalet is like nothing else and you can literally read the history of the Tour as you climb with the names of various past and present champions still painted on the road. 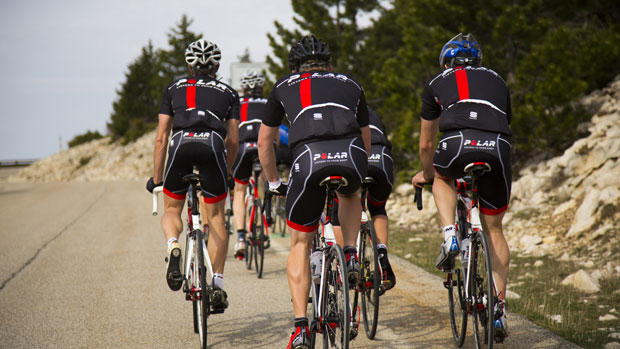 None of this history and scenery could get my body past the fact that I was pushing my limit at altitude though, and everyone else must have been feeling the same as they slowly but surely dropped away from my wheel until it was just myself and our guide Matthieu left. Or so I thought, as with just 3km to the summit a Frenchman from Triathlete France magazine caught up to us and attacked straight through. 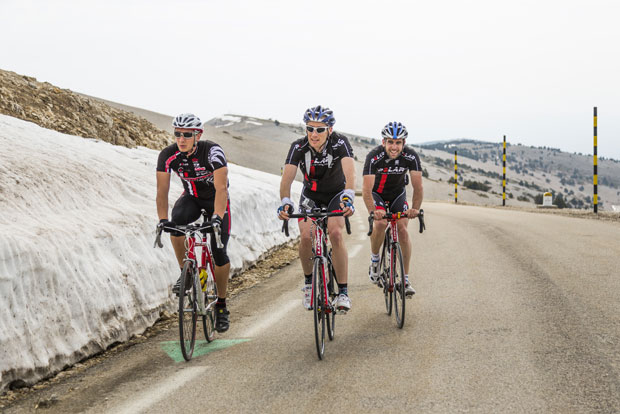 Matthieu (left) and myself were enjoying the views of the still snow touched Ventoux when from seemingly nowhere the French triathlete journo (right) arrived.

It was at this stage that I cracked completely, my head dropped, my shoulders were rocking and I had about as much style as a father who thinks he’s cool at his 13year old daughter’s birthday party. Yep, it wasn’t pretty. Then the advice of the PEZ came floating back to me – ‘Don’t embarrass us.’ Being beaten by a Spanish guy who must have weighed 50kgs and a Dutch guy who still races at a top level today I think the PEZ could live with – but a triathlete? I thought the PEZ would kill me so I put my head down, ignored what the RC3 GPS was telling me and dropped down a gear trying to chase him and the guide Matthieu back.

Slowly, ever so slowly I was bringing them back one meter at a time until finally at 800m before the summit I got on their wheel. Knowing that the final corner kicks up at some ridiculous steepness I decided to wait for that moment to unleash my sprint. Luckily for me after his tough chase back on earlier down the mountain the triathlete was cooked and I cruised straight by him, and despite a sprint from Matthieu I managed to take 3rd place at the top. 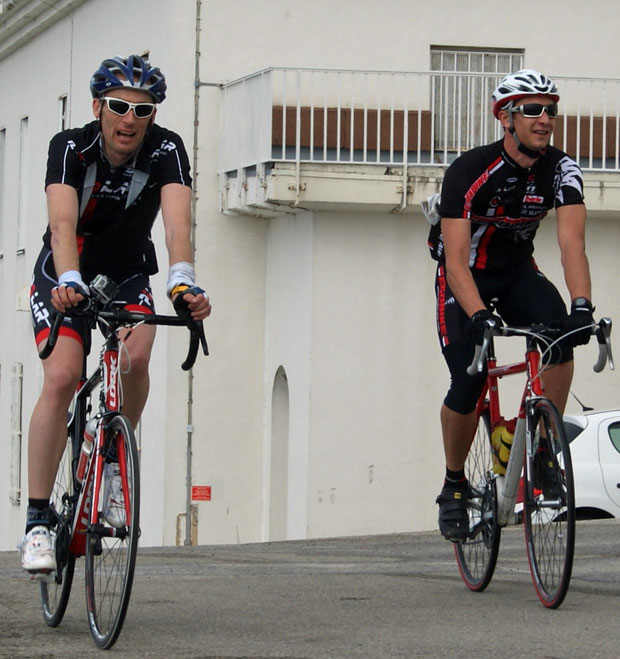 Sprinting in for 3rd ahead of Matthieu and scoring my highest heart rate of the day – 173 just 11 beats short of my maximum and not too bad after more than 1hr30m of climbing.

I’d done it, I’d conquered Ventoux and saved PEZ’s honor and even had a great time doing it. Thanks to Polar for the invite and the crazy idea of letting loose 30 journos on France’s hardest mountain as a product test. Keep it tuned to PEZ for a full review on the RC3GPS Special Tour de France Edition soon, just after I log some real kilometers on it – but first I’ve got to recover from this effort. To have a look at the RC3 GPS before my test you can always check out Polar’s website. 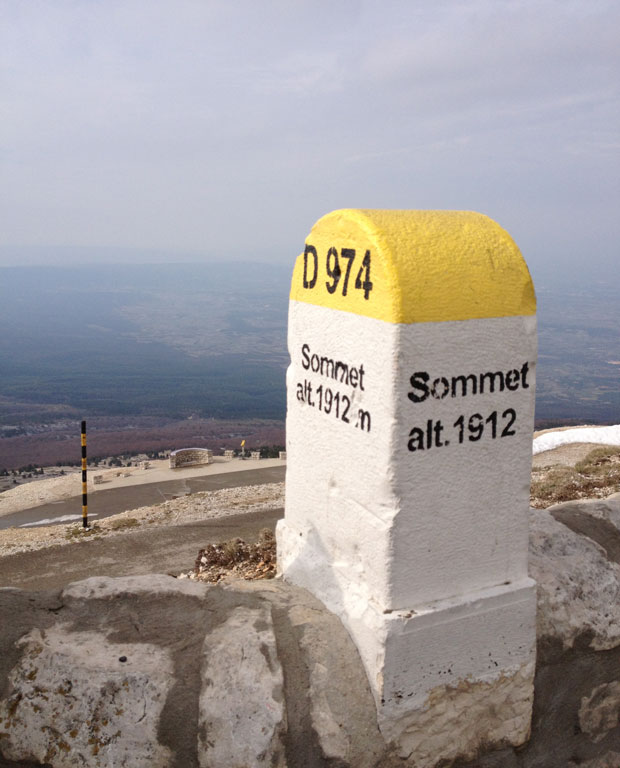