It must be something in the water in New Zealand; the country already boasts one of the world’s best omnium riders in Shane Archbold – a Worlds silver medallist in the discipline in 2011. But then along came 23 year-old compatriot Aaron Gate to take Worlds gold in this most demanding of events in Minsk in February of this year.

Gate first appeared on the radar as part of the winning novices’ team sprint team in the 2006 Track Nationals. By 2008 he was on the world stage with a bronze in the junior team pursuit to show for his efforts.

His talent developed through seasons 2010/11/12 with strong World Cup showings in the team pursuit culminating with Olympic bronze in London. But it was this year when his career really took off – four national titles were followed by the world title.

PEZ recently spoke to Gate about his winter track season so far and his plans for the future.

PEZ: The Amsterdam Six in October was your first six day, how was it, Aaron?
My first six day was definitely a new experience. It also happened to be my first time racing on a shorter 200 metre velodrome – and one with very tight corners at that! This really made the dynamic of racing unlike any other track racing I had done before – be it a carnival or the world championships. 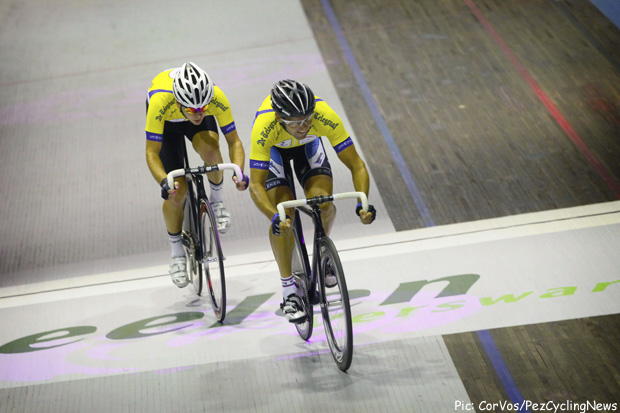 Aaron with super experienced Luke Roberts at the Amsterdam Six

PEZ: Having Luke Roberts as your partner must have been helpful?
It certainly was! Luke has a huge wealth of racing knowledge, with multiple world team pursuit titles and many six days under his belt; and he was more than willing to pass much of this on as a great teacher for the week.

PEZ: Do you think that riding the six days is helpful preparation for the omnium?
Yes and no. My main goal for the Manchester World Cup in November was to improve on my bunch racing events; particularly the points race. I feel I achieved this in Manchester and the six day certainly helped.

The gears used are a lot smaller than you would use at Worlds Cups, though – so this helped develop my feel for high cadence again at the start of the track season having just come off the road season.

PEZ: That Manchester World Cup – bronze; which events were you happy with and which were you unhappy with?
I was actually fourth; third equal on points but count back in the timed events left me having to settle for fourth. I was battling with a knee injury for the three weeks leading into the six day which left me very underdone training-wise, so realistically I knew I was not going to be able to win in Manchester. I just had to shift my goal to making the most of the bunch events.

I was happy with how these turned out, but was very disappointed with all of my timed events. As I said though, this was in line with what I was expecting leading into the racing and being only the start of the track season I know what I have to do to get to the back of the top of my game before the World Championships.

PEZ: How did you get into omnium riding?
Just racing ‘everything’ on the track to start with. In terms of racing it really competently though, that only came about this year. I went to the national championships in January with the aim of being selected to ride the individual pursuit and points race at the World Champs in Minsk.

When I ended up winning the scratch, points, individual pursuit and madison national titles (along with the omnium title I already had) Bike NZ was keen for me to give the Omnium a go, and about two weeks later I was a World Champion! It was a pretty surreal month. 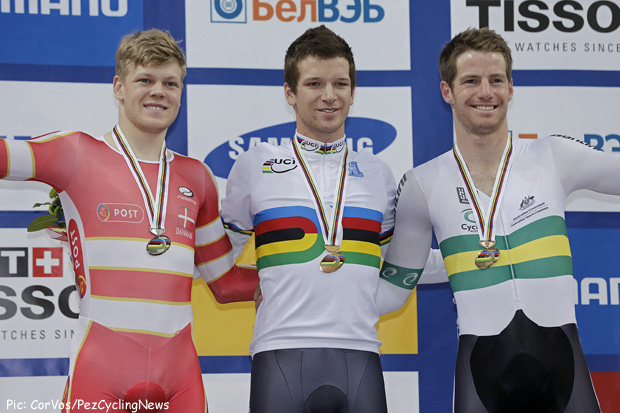 PEZ: Is it good for the motivation to know that Shane Archbold is chasing your omnium place?
Yeah, Shane and I are great mates, and we often joke that I spend more time of the year rooming with him than my girlfriend! But we both enjoy riding both the omnium and the team pursuit, and I’d say we do help keep each other on our toes.

PEZ: The Belgian, Jasper De Buyst won the omnium in Manchester, how much of a surprise was that?
To be honest I wasn’t sure who was going to win in Manchester, but Jasper is a really talented rider (De Buyst would go on to win the recent Gent Six with Leif Lampater. Ed.) and posted some very fast personal best times there so he certainly deserved the win!

PEZ: What’s your opinion on the new UCI qualifying rules for the World Cups and Worlds – if you missed Manchester you’d have to go to Mexico twice for World Cups then Colombia for the Worlds . . .
Well it seems to have its ups and downs. It seems the UCI is essentially trying to create more track racing throughout the season, and enforcing that if a rider wants to ride at the World’s, they have to race their track bike along the way to get there.

PEZ: Sixes, World Cups, Worlds and all the travel – do you take a break before the road season?
Unfortunately it seems this is one of the trade offs of racing both on the road and the track – the lack of down time. The time I ended up having to take off the bike with my injury in early October now pretty much has to be deemed as my off season.

I will at least get to enjoy some time at home in the New Zealand summer through the majority of December and January – but if I said I was going to have my feet up for much of this period, I would be lying!

PEZ: How much time do you get in New Zealand?
Actual time at home probably works out to about three months of the year. At least us southern hemisphere folk are always jumping from summer to summer though – I haven’t really seen a winter since 2008 – excluding the snowy start to the European Spring this year that is…

PEZ: Will you be riding the track Nationals again – four titles last year – impressive!
Yes I will be, but whether it will be as successful as this year I’m not so sure.

PEZ: How did you get the AN Post ride – what’s the team like and are you back there for 2014 ?
I did a bit of racing on the road based in Belgium with the NZ national team from 2009 onwards, and kept progressing each year I was there. The national team then got to know Kurt, the director/manager of An Post (famous for his appearance in the team’s video on YouTube of Sam Bennett’s stage win at the Tour of Britain this year) and having seen us race was happy to take on a couple of Kiwi’s as track specialists for his roster.

And yes, I am looking forward to having an even better season with An Post Chain Reaction again in 2014. The team is made up of a great group of guys, and has a well established set up with a top racing program – so 2014 should be a great year. 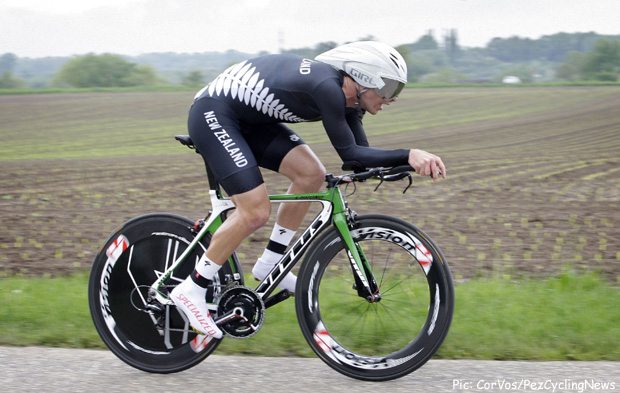 PEZ: Do you enjoy the ‘Belgian experience’?
Yes I sure do, and it certainly is an experience! The love for bike racing in Belgium is simply awesome, and it is fun to be a part of that – even if the weather does enjoy throwing plenty of ‘variety’ at you whilst you battle over some cobble stones.

PEZ: You placed top 10 in Halle-Ingooigem, that’s a big race . .
Well a win would have been even nicer, but yeah I was pretty happy with how that race went for me, and it contained pretty much all of those ‘Belgian Experiences’: Cobbles, Climbs, Mud, Rain, Wind and even finished in a bit of sunshine. 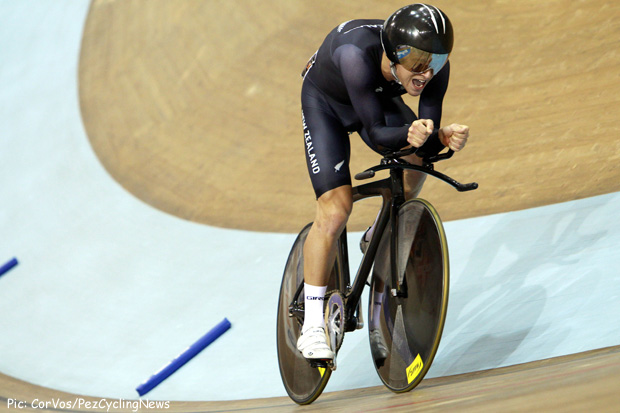 Aaron on his way to gold at the Omnium in Minsk at the Worlds.

PEZ: What do you want from 2014?
It would be great to be able to defend my World Title and also get another Worlds medal with the team pursuit squad – and there are the Commonwealth Games as well, where I would like to tick a Gold medal off the list. A handy win or five with the An Post Chain Reaction squad on the road would be nice, too!

The perfect Christmas present to the dedicated cycling fan