One man who has been in the mix throughout the Classics season has been Argos-Shimano’s Simon Geschke. On the attack in Brabantse & Amstel, PEZ caught up with Simon after his strong performances to talk about his season to date.

If you’ve been around cycling since the 70’s then you’ll be aware of the name “Geschke.” Jurgen Geschke was a multiple German champion in the individual and tandem sprints; going on to win Olympic medals and rainbow jerseys in both disciplines. Any sports physiologist will tell you that the best thing you can do to guarantee success is to, “pick your parents carefully.” Argos Shimano’s 27 year-old Simon Geschke did a good job in that respect – aforementioned Jurgen is his dad.

But you still have to push those pedals and Geschke junior has been working his way up the rankings each year. It was 2007 when he took stages in the Steiermark Rundfahrt in Austria and Ronde de l’Isard in France. The next year saw a spell as stagiaire with German squad Milram but when he signed the pro contract it was with Skil-Shimano in 2009. There were top ten finishes in the Frankfurt City race and overall of the Bayern Rundfahrt (Tour of Bavaria) – and a ride in le Tour. He repeated the German results in 2010, still with Skil, and added third in Korea’s Tour de Seoul. In 2011 the Skil man grabbed his first big win, a stage in the Criterium International, was top ten again in Frankfurt – and also Brabantse Pijl – then rode the Vuelta.

Last season, Skil-Shimano became Argos-Shimano and there was a second spot in the Hel van het Mergelland, top 20 in Milan-Sanremo and another Vuelta. This season the results have stepped up a notch with eighth in Roma Maxima (the old Giro del Lazio), fifth in Brabantse Pijl and 18th in the Amstel Gold Race. We spoke to Simon on the eve of the Fleche Wallonne for an inside look at the Amstel Gold Race. 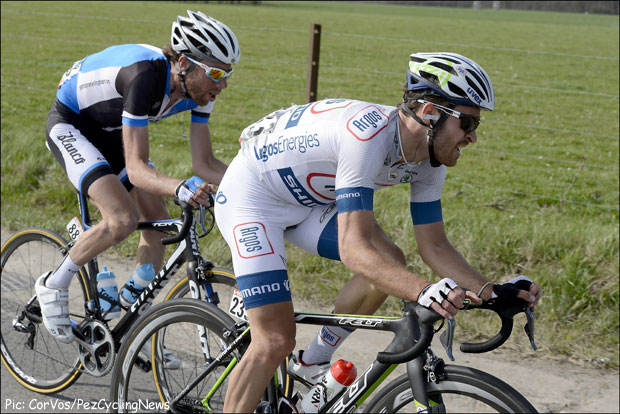 Pushing hard in the break at Amstel

PEZ: The Amstel, 18th – are you happy with that?
You always think that if you’d done this or that things would have been better – but the team did a good race. There are crucial points in the Amstel where you have to be at the front and we were where we had to be. But at the end my legs weren’t good enough on the Cauberg – but I think my performance is good for the future.

PEZ: What was the Argos game plan?
Francois Parisien and I were the protected riders for the final, the rest of the team was there for support, we had no intentions of going in the early break. Their job was to get us to the front coming in to the Cauberg for the last time; in the end it was just me, Francois told me he didn’t have good legs.

PEZ: Were the Ardennes races a big objective?
The Brabantse/Amstel week is one of my big goals for the year – I’m happy that the plan worked and I got good results. The preparation races I rode were perfect for bringing me to form – the Pais Basque was very good. My programme, coming off a good winter of training meant my form was good – I wanted to make the top ten in Brabantse and got fifth. 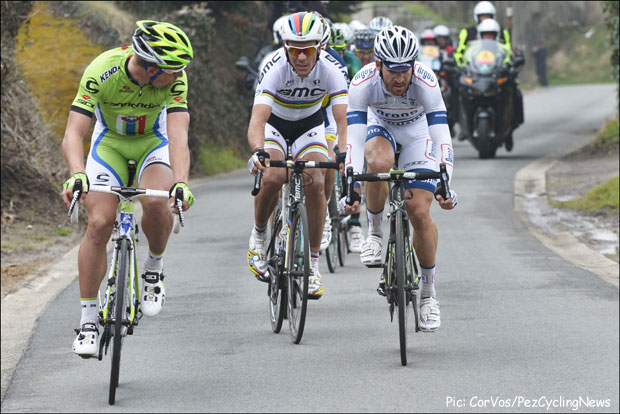 PEZ: The Amstel has a name as a dangerous race.
That’s one of the things about the Amstel, the roads are very small, there’s a big bunch and it’s a very nervous race. It gets more nervous the closer you get to the final and you always have a situation where favourites crash out – like Rodriguez, this year. It’s part of racing; crashes are bound to happen but if you’ve never ridden it before it’s easy to be taken by surprise by the parcours.

PEZ: It has a name for cross winds, too.
It wasn’t too windy; if it had been then it would have been a harder race. But you definitely felt it when you were on the limit coming off the top of climbs – it wasn’t like a storm but you felt it.

PEZ: The heat affected Sagan, badly.
I was happy the sun was shining but I did have problems; I could feel cramp coming on when I was at the limit and out of the saddle. Milan-Sanremo had the snow and the Pais Basque had rain and snow, so your body gets used to those conditions. It’s very difficult for your body to switch; even the day before, when we were out training, it was cold. I didn’t wear an under vest in the race but I think it was worse for Sagan – he definitely cramped.

PEZ: When the break went to 11 minutes, did you think it might stay away?
No, but when it went to 11 minutes I began to wonder when Cannondale and BMC would chase. It wasn’t up to us to chase, you trust that big teams will chase, I thought they’d maybe let it go eight or nine minutes – but not 11. But when the final approaches the peloton will take back a minute from the break on every hill.

PEZ: What did you think about them moving the finish away from the top of the Cauberg?
I didn’t mind it, those extra 1,700 metres can make for a more open race – for me it’s better because you have more time to recover before the sprint.
I don’t like the other climb on the Worlds finishing loop – the Bemelerberg, there’s no downhill off the top and you don’t drop until you get to the descent into Valkenburg. But I think the new parcours makes the race more open and less predictable.

PEZ: Kreuziger – a surprise winner?
I think he was not on many peoples’ lists; but you can’t say it’s a surprise – he’s had good results over the years. He attacked just at the right moment and held off Gilbert, Valverde and Gerrans – that’s not easy. I saw the final on YouTube and he rode a very impressive race.

PEZ: The Fleche and Liege, next . . .
I look forward to Liege, but the Fleche is a nice race, too – but my main goal was the Amstel. (As it transpired Geschke was one of the major animators in the Fleche) I want to do well in both of those races but I have to be realistic. 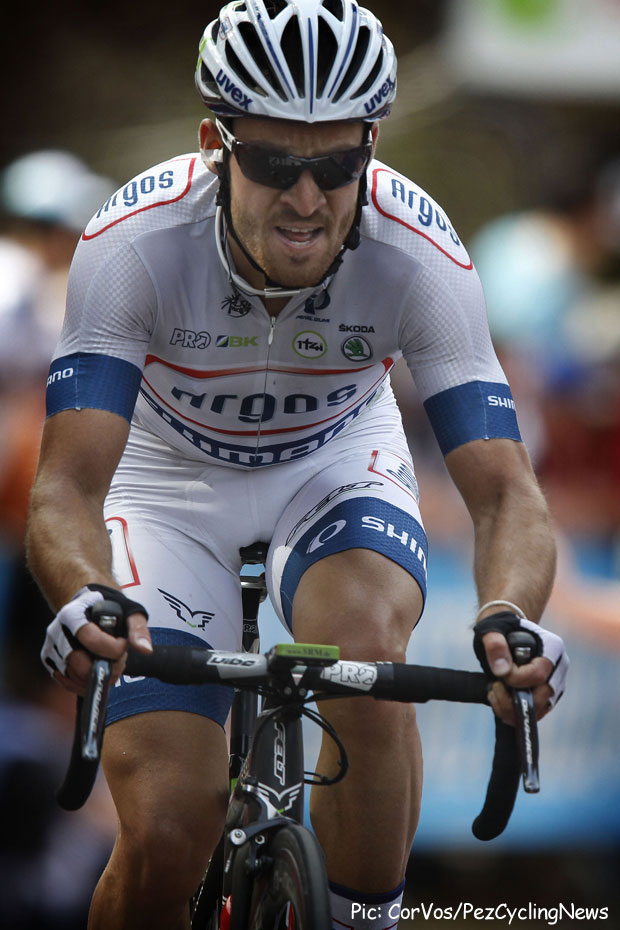 Simon was in amongst the action again at Fleche Wallonne.

PEZ: Do you get a rest, now?
I have one more race before I take a break – Frankfurt on May 1st where I’ve been top ten on three occasions. It’s a goal for me so I’ll train ‘til then and keep in shape. I don’t live in Frankfurt but it’s a home race for me – there are not so many left like that In Germany – and the parcours suits me. 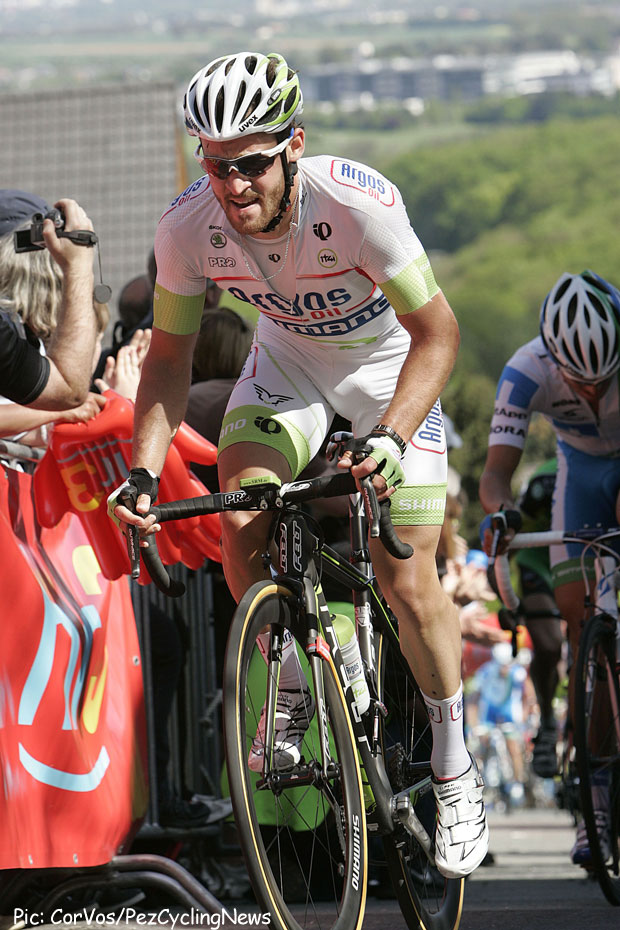 Trying hard for a ‘home’ win at last year’s race in Frankfurt. Maybe this year?