Young, talented and in just his 3rd season as a pro, at 22 years old Arnaud Démare already has a palmares that many older pros envy. With wins at the Vatenfall Classics, Tour de Suisse, Qatar and more he’s a young man on the move. We recently caught up with Arnaud to talk about his career so far and his ambitions for what lays ahead.

The phrase, “the next big French star”, has been said on many occasions as the French have been searching for a rider to capture their hearts and minds since Laurent Fignon and now they might just have found him. He’s not a GC man like Fignon but he is a top sprinter and at just 22 years old has already won some big races riding for FDJ. He is equally adept at winning a flat bunch sprint or on a short, steep climb. 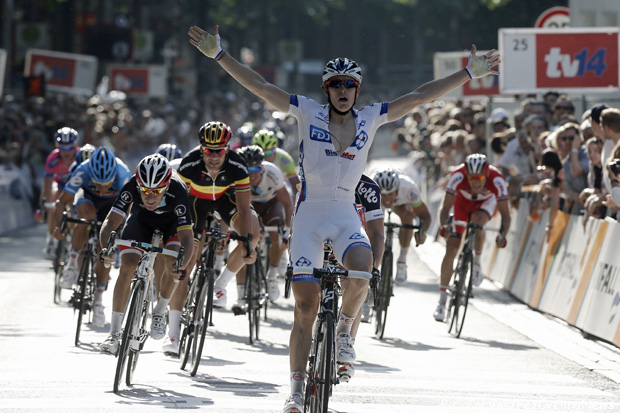 Arnaud taking the win at the Vattenfall Classics in 2012

This year is very important for Arnaud as he continues to develop as a rider and sets his sights on the Classics and Le Tour. He’s had a busy start, racing in Qatar, Algarve and competing in Omloop and KBK. He surprised many in Omloop, by making it into an important break with only a crash by Yoann Offredo, stopping him from remaining at the front of the race with Lars Boom and Niki Terpstra.

2013 was an amazing year for you, winning Dunkirk, GP de Denain Porte du Hainaut, stage 4 of the Tour de Suisse, the Ride London Classic, stage 2 of the Eneco Tour and GP d’Isbergues. You were also 2nd in Paris-Bourges and 3rd in Paris-Tours. What did you think about the season?
It was a great season. I can see that I am making strides from one year to another. It was only my second year as a pro rider so I surprised myself. I hope I will be surprised like this every year from now! 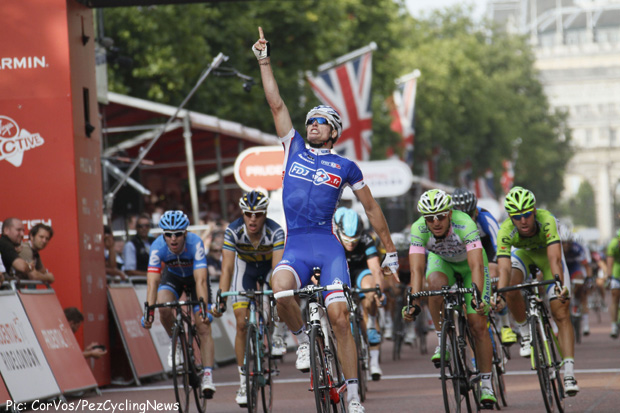 Which race was your favourite?
Each race is special. At the London Ride Classic, raising my arms in front of Buckingham Palace… Winning a World Tour stage in Tour de Suisse… Winning at the Eneco Tour in front of Philippe Gilbert and his rainbow jersey… and also the 4 days of Dunkirk, my first stage race… All are very special memories.

As a fan, your performance in Dunkirk was amazing, winning the opening 3 stages and GC. This was your first ever stage race win, how important was it?
It was a type of pressure I did not know. Usually, I am taking the race one day at a time, trying to win the stages. But in Dunkirk, I really wanted to take the leader’s jersey to the final day. The problem was that there was a very hard stage for me and I had to fight against myself and work hard.

Stage 2 of the Eneco Tour was another great day for you. The stage ended with a steep uphill finish and you passed Gilbert to claim victory. How pleasing was it to pass the World Champion on the way to win the race?
As I said earlier, it is such a memory! The photo finish with me in front of Philippe Gilbert, who is one of the greatest riders I know…When I was still an amateur, I used to watch him on TV and dream I could possibly become a rider too. So yes, it was kind of weird. 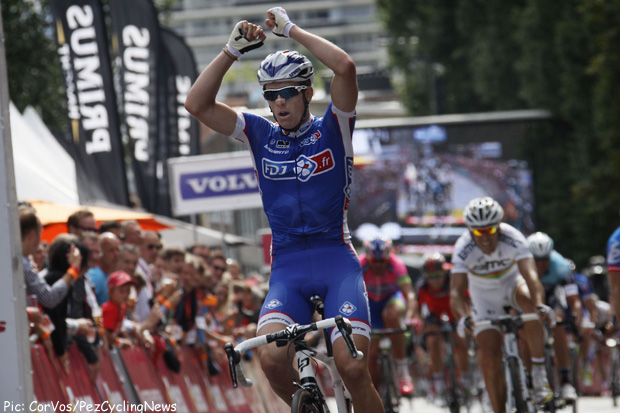 Outgunning a certain Philippe Gilbert in the Eneco Tour

You seem able to cope with all types of sprint finishes: flat and steep, but what type of finish is your favourite?
As a sprinter, I have to be operational on every type of finish and I am working hard on each kind. Personally, I am more into steep finishes. I think it can become added value sometimes.

Riders often say that riding a grand tour is great for fitness and strength. You did the 2012 Giro but did not complete it. Do you plan on trying again this year?
Yes, of course. In 2013, it was a real choice not to participate to any of the Grand Tours because I, and my staff, wanted to focus and discover the Classics. I am only 22, I have a lot of time, there is no need to rush. But this year, I told Marc Madiot that I really want to be on the Tour de France. I feel ready now, both mentally and physically.

Let’s talk Classics. Your first World Tour victory was in the 2012 Vattenfall Classics and you were 4th in Kuurne-Brussels-Kuurne in the same year. In 2013 you were 12th in Gent-Wevelgem and 24th in Flanders. Which of these are best suited to your abilities?
For now, in terms of results, Gent-Wevelgem seems like a reachable objective, and I like this race. To be honest, my long-term objective is having the leading role in Flanders or Roubaix. In those types of races, it is when riding that we learn for the future.

What about the bike you use in the big races – What do you think of it?
Lapierre, our bike partner, really tried their hardest, collaborating with our Research and Development staff, to create a special bike both unbending on the road and relatively flexible on the cobble stones. We went through a series of tests to make it the most efficient possible. The team will use it at Flanders and Roubaix. I think that with this bike, we will be seriously equipped to make a significant result.

You don’t seem to have a problem with long races. Is this a natural ability or something you work at?
I have no special ability; I am working like any other rider. When training, I don’t do a lot of fundamental work. With this basic kind of training, I can find it in the competitions and more especially on stage races. I rather do specific training; this is a personal choice I am following since the junior category. The objective of the specific work is not to lose my explosive power. I made this choice with Hervé Boussard (Démare’s trainer who tragically died last year) and I am keeping on with my new coach Julien Pinot. 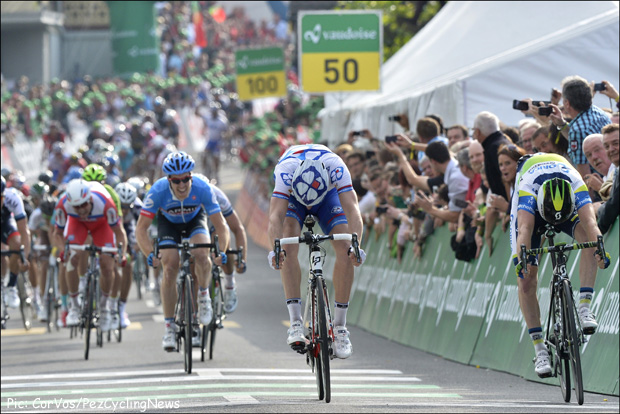 You were 5th in the under 23 Worlds in 2010 and won in 2011, but haven’t raced the senior race yet. Could 2014 be the year for you?
Last year, the circuit was too hard for me. There is absolutely no interest going to the Worlds to come back with a top 100, if there is another French rider more capable of having a good result. For 2014, I am still waiting to see the route but 2016 Qatar is something in my head!

You started the season in a very windy Qatar. What was the race like?
I wanted to be in good shape from the outset, to be sure I am not missing any occasion to win. Plus, Qatar is a rapid race so if you are not well, if you don’t have the good legs, you are quickly dropped or in the last peloton. Qatar is a good race to get used to rub along with the others again. This race is kicking off the season for real.

What are your goals for 2014?
As you understand now, my first objective will be the Spring Classics, from Gent to Roubaix. Then I will be focused on the Tour de France to earn my name on the final team roster.

Top-3 again for Olga Zabelinskaya in Vuelta a El Salvador