Former US Elite Road Race Champion Ben King has decided that after three years with Radio Shack, a change is due. The 24 year-old from Virginia will ride in the service of Jonathan Vaughters’ Garmin squad from January 1st adding to the US team’s already deep pool of young American talent.

King rode for Kelly Benefits in 2008 before moving to Trek-Livestrong for seasons 2009/10 and it was in his second season with the team that he won the US U23 and elite road titles.

He signed for Radio Shack in 2011 and has remained there until now – perhaps not experiencing the progression in terms of palmares which observers expected. But he’ll be hoping that’s set to change as he joins the ‘Argyle Armada,’ 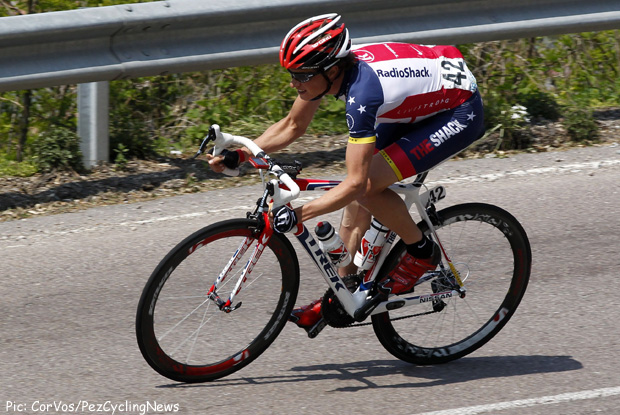 King riding in his Stars and Stripes jersey in 2011.

King recently took time to talk to PEZ about the move.

PEZ: Back on a Cervelo after all those years on a Trek . . .
In high school I used to ride to school and tell people that my girlfriend, Cervelo, was in the trunk of my car. I’ve enjoyed racing on Trek and helping with product development; but it’s nice going back to another bike that I know, intimately.

PEZ: It must have been hard to get an opportunity to ride for yourself at The Shack – will there be more freedom with Garmin?
RadioShack was a team very organized around its leaders and stars and that was often a very successful model. We won a lot of races and it was a full team effort. I grew a lot as a rider during my three years on the team, especially surrounded by so much experience.

I think that my value as a support rider, coupled with the tactical, ethical, and professional knowledge I’ve accumulated is one of the reasons that Garmin sought me out. Of course, I’d never pass up a chance to score a result, but I’m committed to the team’s goals. I’ve never been made disappointed or jealous by having helped a teammate win races. 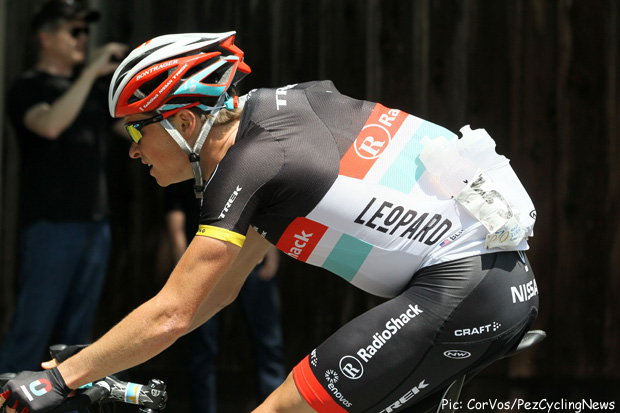 Helping the team at the Tour of California.

There is a lot of youthful enthusiasm on Garmin this year with the average age of the team at 25; so I would expect that to show in the team’s tactics – but I’ll leave that up to the directors.

PEZ: You seemed to ride an awful lot of races with The Shack?
I didn’t ride more races than my teammates. There are a silly number of races on the pro calendar and our season is so long.

PEZ: But no Grand Tour – will that happen with Garmin?
I expect that as long as I’m riding well and healthy, I will get my first Grand Tour start with Garmin.

PEZ: Have Garmin discussed your programme, yet?
I sat down with my new directors at our recent team camp to discuss my program. I’m excited. It’s a great blend of the races that I know and others that I’ve wanted to do, plus a healthy dose of the USA program. I do love racing in my home country.

PEZ: How much of a jump was it from the Trek U23 team to The Shack?
It was exactly the way I had it explained to me by the Pro Tour veterans- harder, faster, and longer. That said, it’s the same sport, driven by the same values and ethics.

You still train and race to get the best out of yourself; it’s just that an effort that might land you on a U23 podium might have you hanging on for dear life to the back of the front group.

PEZ: Do you have a coach – are you ‘hi-tech’ and watts or ‘old school’ and miles?
This year I worked with a RadioShack trainer, but still used Jim Miller of USA Cycling as a mentor. From our years of working together he knows how I respond to certain types of effort. My tendency is to go big, sort of an old school mentality, but that’s all measured by watts.

PEZ: Has training started yet – what will be your first race?
I’m sitting on a spin bike in the basement as we speak. I’m slowly ramping into it, riding and resting, and building motivation. This is the longest “off-season” I’ve had in six years. My first race will be San Luis in Argentina.

PEZ: Which performances were you most pleased with in 2013?
I placed top twenty in almost every TT I raced and top ten in Austria; but I’m hoping to be consistently in the top ten eventually. I’m pleased to have played a part in the team’s success. Liege was the most epic race I’ve done – It was over six thousand kilojoules expended and seven hours duration.

I traded bikes with Max Monfort on La Redoute when he had a mechanical. And I’m pleased to have survived the coldest and wettest winter and spring in Tuscany in seventy years. 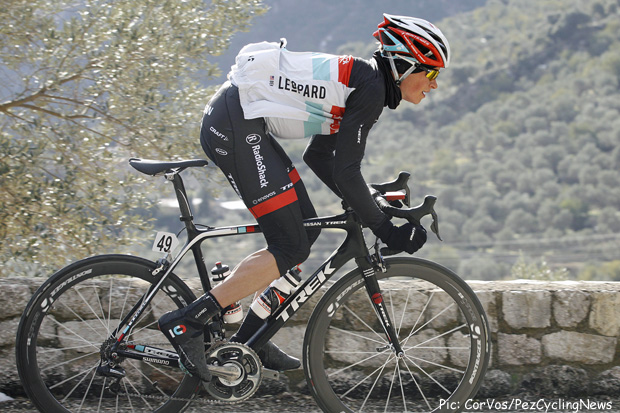 PEZ: The 2010 season was perhaps your best – why?
It was the culmination of years of hard work, a great team atmosphere on Trek-Livestrong, sound advice from Axel Merckx and my other mentors, and a healthy balanced lifestyle. I’ve been getting stronger every year since 2010, trusting in the process, and showing small consistent improvement, although it may not always be apparent in the results.

I haven’t reached my full potential but I’ve caught glimpses of it and I’m confident that with patience, and momentum, I will continue to improve.

PEZ: How would you describe yourself as a rider?
I’m a hammerhead. Almost all of my results have come from breakaways and time trials. It’s been harder to get into breakaways with a RadioShack target on my back and with other team objectives, but I’ve been able to use my strengths as an all-rounder as a domestique.

It’s been great racing with Jens Voigt – I’ve always admired his racing style and enthusiasm. I’ve been surrounded by a lot of great examples. 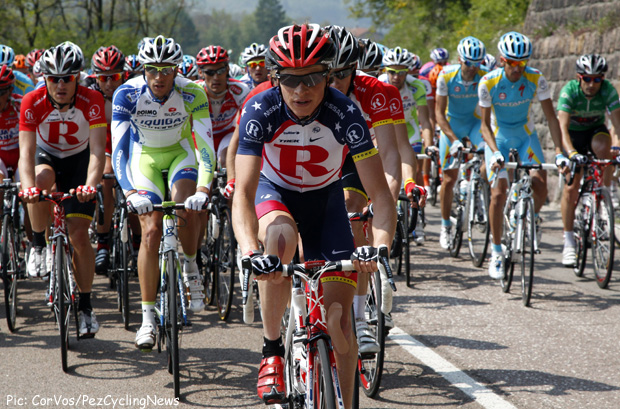 PEZ: What’s your favorite kind of race?
Some of my favorite races are the Tours of California, Utah, Austria, and Dauphine. I like the races with smooth roads, nice scenery, and good hotels. Every pro tour cyclist is a hard man, but we all appreciate certain luxuries as we flog ourselves.

PEZ: Five big teams gone at the end of 2013 – scary – how much do you think is to do with the perpetual drip of doping stories?
I don’t know. There are other variables like the economy. Cycling is such a fantastic sport and on the recreational and amateur level the sport has grown every year.

PEZ: The end of 2013 was very competitive with riders battling to get noticed and sign/retain a contract – do you see that trend running into 2014?
I hope not. There is a lot of squack about new teams planning to enter the scene in 2015. It has been heartbreaking as some of my friends in the sport, great riders scramble for teams. I’m extremely thankful to have landed on my feet but it was and is very stressful.