Some say that last is the worst spot to finish a race; but there’s also a school of thought which says second place is the worst. And some would say that the worst races to finish second in are National or World Championships; the winner gets to wear the champion’s jersey for a whole year – the runner-up gets the silver medal to toss in a drawer, somewhere. BMC’s Brent Bookwalter had to endure that feeling twice in the one week.

He finished second to big chrono specialist Tom Zirbel (Team Optum p/b Kelly Benefit Strategies) in the US Elite Time Trial Championship. And he was second again, to Freddie Rodriguez (Jelly Belly Cycling p/b Kenda) just days later in the US Elite Road Race Championship. Bookwalter has a good record in the Nationals; he was second in the U23 TT and third in the U23 cyclo-cross Championships in 2005 in the colours of Advantage Benefits-Endeavour. And the following year, with Priority Health he won the National U23 Road Race Championship and was silver medallist in the Time Trial Championship.

It was 2008 when he signed for BMC and has been there ever since; that first year saw a mostly US programme but there was a foray to Europe and he rode the Tour of Romandie.

In 2009 he won Tour of Utah prologue and broadened his Euro experience, riding Romandie again and the Dauphine. A year later he rode Tirreno and produced the result which thrust him firmly into the public consciousness, second to Bradley Wiggins (Sky) in the Giro prologue. He also rode the Tour de France that year.

He would ride le Tour the following year as well as the Tour de Suisse – and finish fourth in the US National Elite TT Championship. The programme for 2012 was a full one; Paris-Nice, Romandie, Suisse and the Vuelta – and he moved up to bronze in the time trial Nationals. 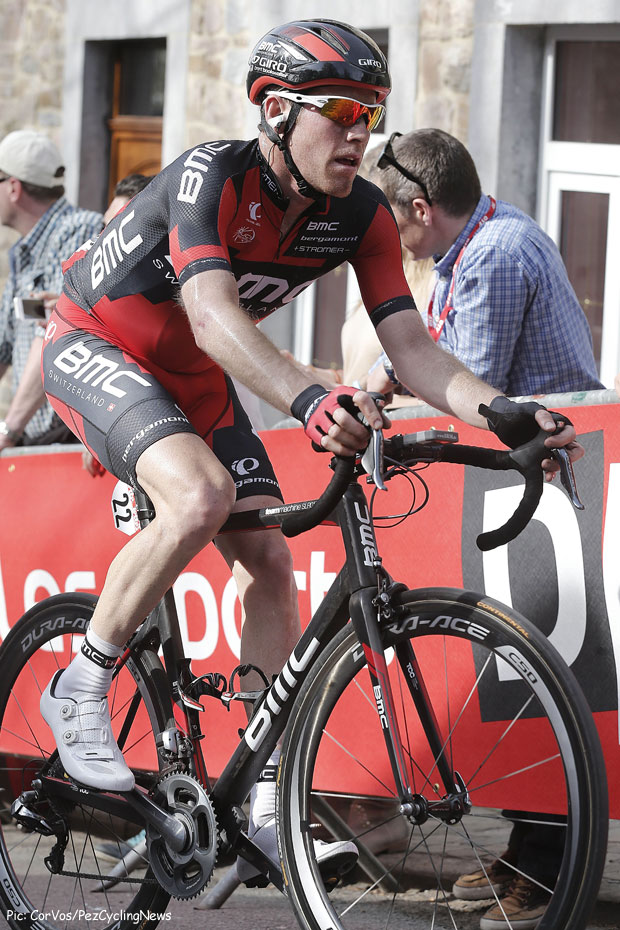 This year saw his best ever start to the season, winning stage one of the Tour of Qatar then defending it in the best possible way with BMC winning the stage two TTT – he’d eventually finish the race in second spot overall. And most recently, he grabbed his brace of silvers in Chattanooga.

We caught him just off the massage table as he prepared for the start of the Dauphine.

PEZ: It was always going to be hard to beat Zirbel on that course.
Yeah, it was a straightforward course, rolling a little – all about power.Zirbel was my minute man so we were keeping tabs on him and he was killing me on the down hills. But he’s a good time trial rider; don’t forget he’s been fourth in the Worlds (to Fabian Cancellara, Gustav Larsson and Tony Martin in Mendrisio 2009, ed.) so he’s no slouch. I did the best ride I could on the day. 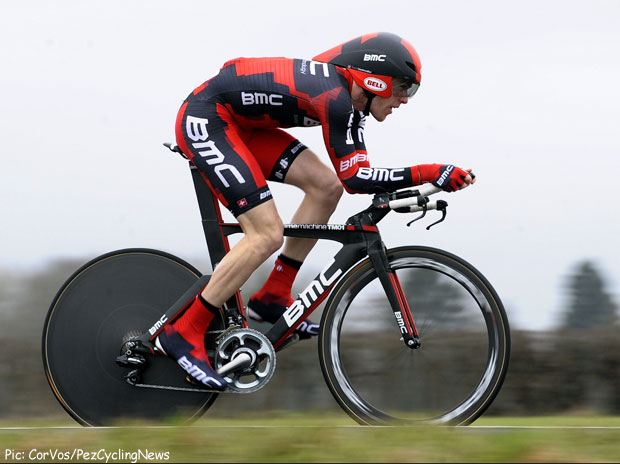 PEZ: Were you happy with your ride in the road race?
Extremely happy, except for the last 10 metres! I felt good all day, I rode smart and was pro-active and didn’t get caught out with splits. I was attentive and focused and was always at the front. When Phil Gaimon (Bissell) got away things got a bit hairy – but approaching the finish I had good position but coming into the last 500 metres Kiel Reijnen (UnitedHealthcare) – who took bronze – had a mechanical issue and that let Freddie get the jump on us and I couldn’t quite get back to him.

It was disappointing to be so close, but there are so many variables in a sprint – my finish was a good one; I checked my power files after the race and it’s the most power I’ve ever produced in a sprint.

PEZ: Freddie, a surprise?
A little, I didn’t know what to expect from him – but I saw him early on the big climb looking comfortable and strong. His team is a good one and when we got onto the finish circuit and he was still there I knew he’d be a factor. He just did what he does best – sprinting from a small group . . .

PEZ: Do you ‘Euro Guys’ ever consider a combine against the ‘Home Guys?’
It’s something I had thought about and I’m good friends with Matt Busche, Ted King and Timmy Duggan; we’ve been on the same career path. There was no agreement, no plan – but if it wasn’t me winning then I’d be happy if it was one of them. And I certainly wouldn’t chase them down to make them lose and end up fifth myself. But we were all there to win and do our best . . .

PEZ: What did you do between the Tour of California and the Nationals?
My home is in Ashville, North Carolina which isn’t that far from Chattanooga, so it’s the only race on my programme which I can drive to. It was nice to be able to spend a bit of time at home and then put the bike in the car and drive to the race.

PEZ: I believe it was ‘damn hot’ in California.
All the Euro Guys had to endure a cold, wintery spring so the heat came as a real shock. It felt brutal, but the BMC staff did a great job of looking after us. And of course we were switched on for the race because we had a big reason to be there in Tejay van Garderen (who eventually won the race. ed.) If you have a focus then the cold and heat don’t seem to affect you so much.

PEZ: How many times have you ridden and how do you think the race is maturing?
I’ve ridden it in 2007/11/12/13 – four times. I feel like in the cycling world it’s getting bigger and bigger in terms of the teams who ride and the infrastructure – that summit finish on Mount Diablo was spectacular.

And whilst my perspective may be skewed – because I first rode the race before I’d been exposed to the biggest European races – I don’t think there as many fans roadside as when I first rode. There were times when I was riding along thinking; “where is everyone?” But we were racing through some dramatic, barren countryside in scorching heat – so you’re not going to get 10,000 folks roadside on a weekday.

PEZ: You hit the ground running in Qatar, this year.
I was definitely motivated to train well over the winter – and there’s also another year of maturing as a rider. My home in North Carolina is an awesome training base, I enjoy riding there and my preparation was good. And missing Tour selection fired me up. We had a really good training camp in Denia in Spain in January – the wind was terrible for the duration. But we couldn’t have had better preparation for Qatar – it was great practice for riding in echelons and getting to know each other under those conditions. It was so exciting to be part of that winning TTT in stage two. 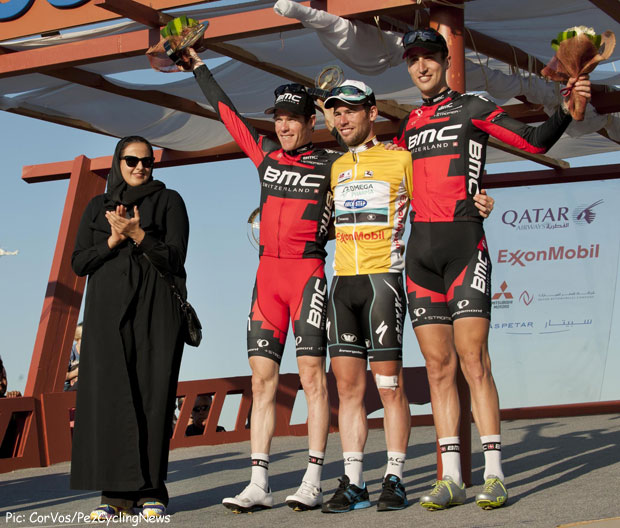 It was only a superb Mark Cavendish who spoiled the BMC party in Qatar with Cav taking the GC just ahead of Brent and Taylor Phinney.

PEZ: Everyone seems to have been sick, this spring – did you manage to avoid it?
I rode Paris-Nice but then I had a tough patch with allergies and had to quit the Pais Vasco. After that I kinda rushed back for the Ardennes Classics; I like those races and was really inspired to ride well in support of Phil Gilbert. I think I paid for rushing back in Romandie where I was DNF – and I’m now sitting looking out my hotel window the day before the Dauphine starts and I can hardly see anything for the rain and fog!

PEZ: It’s been a hectic season for you – when will you take a break?
Good question! I’d like one but if the team needs me, I’m there. The Dauphine is a really important race for me; I’m on the long list for the Tour but how I ride here will have a big influence on the selection. Whether or not I go to the Tour de France will decide how my programme maps out – at the moment it’s uncertain. In the short term I just want to get over the jet lag from flying back from the US and stay healthy and motivated. 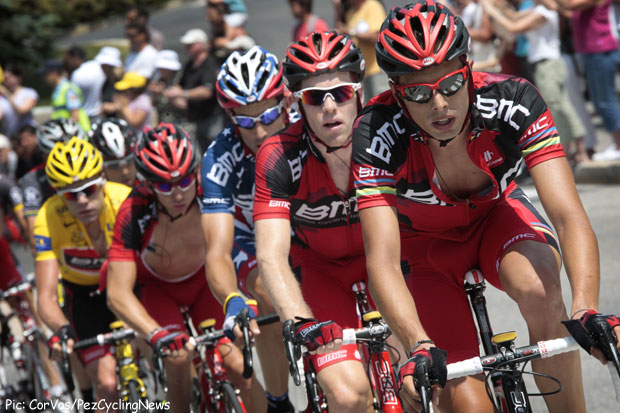 Brent has been there before for Cadel at the Tour and is hoping to be there again this year.

PEZ: That’s six years with BMC, what have been the biggest changes?
When the team started in 2008 it was a much smaller squad and the focus was on the US. Now we’re one of the strongest teams in the world with some of the world’s best riders. It’s a completely different team with a new set of objectives. But that said, Andy Rhys still has the same core values for the team and it feels comfortable and familiar – and we still get to ride the same great bikes!

PEZ: Final question – can Cadel win le Tour?
Most definitely! He’s done it in the past and his Giro performance shows that he’s on track. And he’ll have eight capable and highly motivated riders to back him up!