21st in Milan San Remo, 2nd in Dwars door Vlaanderen and 2nd again in Gent-Wevelgem last weekend behind a seemingly unstoppable Peter Sagan. Astana’s Slovenian strongman Borut Bozic is a man in form. We caught up with Borut this week to check in on his preparations for Sunday’s big Flanders race and to talk about his superb start to the season so far.

We spoke to Borut Bozic back at the Astana training camp in January; the Slovenian Champion sounded to us like he meant business for the ‘Sprinters’ Classic,’ Gent-Wevelgem. And when we saw him finish second in Dwars door Vlaanderen we nodded, sagely.

Peter Sagan was untouchable, but Borut was ‘best of the rest’ in Wevelgem on Sunday.

It was back in 2009 when Borut Bozic really announced his arrival as a fast man, out dragging established ‘finisseurs’ Tyler Farrar and Daniele Bennati to take stage six of the 2009 Vuelta. 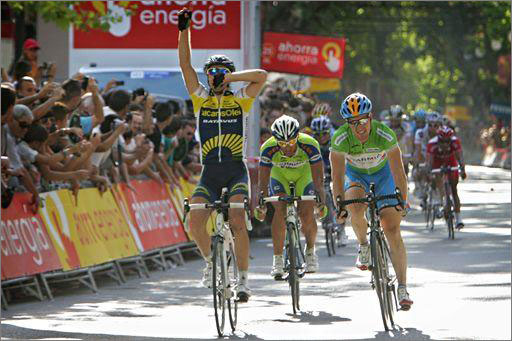 But the man from Ljubjana was winning sprints before that . . .

For 2007 he moved to Swiss pro team LPR taking the overall in the Tour de la Region Wallonne and a stage in the Tour of Ireland. With Collstrop for 2008 there were stages in the Etoile de Besseges and Ruta del Sol and the Slovenian National Championship.

There were two stages in the Etoile des Besseges in 2010 and a Tour of Britain stage; with 2011 yielding a Tour of Switzerland stage and a top ten in the Worlds. 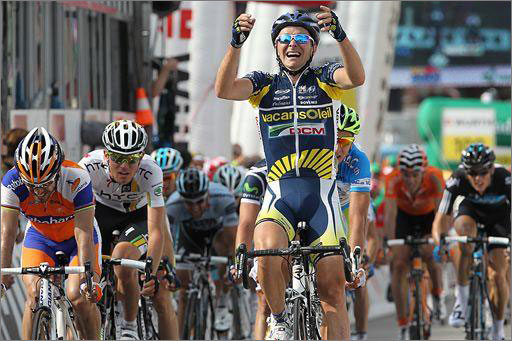 Last season saw a change not just in teams but in cultures, from Vacansoleil’s ‘big family’ to the somewhat sterner ranks of Astana. Although there were top ten finishes in the likes of GP Plouay, Pino Cerami and Hamburg, there was only one win, in the Slovenian National Championships.

But the affable Slovenian has certainly started 2013 in fine style with a brace of second places in two of the spring’s toughest races. PEZ spoke to him on Tuesday as he continued his recuperation after Sunday’s brutal day of sub zero temperatures, cross winds, echelons and – ‘full, full gas!’ racing.

PEZ: Way back in January you said you’d be good on Sunday; why is it such a good race for you, Borut?
As you know, I’m a sprinter and it’s a race which is usually contested by a group of 50 or 60 riders – not a huge bunch. That’s because there’s a selection on the Kemmelberg which makes for a hard sprint – the likes of Cavendish or Greipel suffer on the climbs, so there’s more chance for a rider like me at the finish. I looked for my chance and knew I could do well.

PEZ: What about the conditions?
They were crazy – cold like in Milan-Sanremo but without the snow. It was zero or minus all day except for the run along the North Sea when it went up to two degrees. And the race was full gas all day; I suffered for the whole race – that’s why I’m proud of my result.

PEZ: What did you wear?
Most of the time I had a rain jacket on but not for the last 40/50 K. When I was in the break I saw it was possible for us to stay away and I took it off so as I could ride hard.

But it’s very difficult to know what to do for the best, if you take too much off then you may suffer from the cold. I had a special warming cream on my legs under my leg warmers, that was a good decision; it’s the first time I’ve used it and it worked really well, leg warmers wouldn’t have been enough in those conditions. 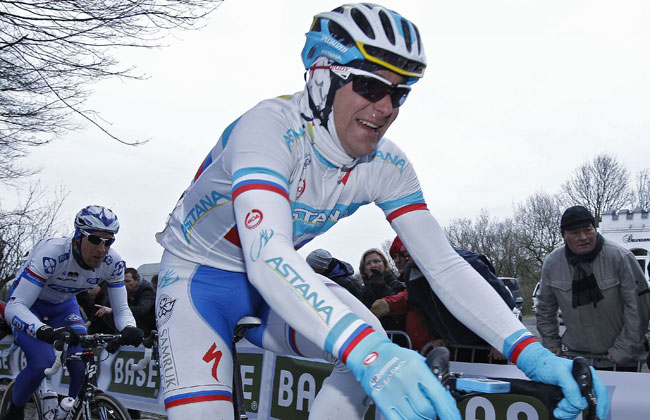 PEZ: It’s difficult to eat and drink when it’s like that.
It’s hard to know what to drink, in Sanremo I had warm tea but maybe there was too much sugar in it perhaps and I was sick. You know that you must eat and drink more than normal due to the conditions; but it’s so difficult to even just reach back to get the food from your pockets.

Then the energy bars are very stiff and hard to chew – everything is just more difficult in those conditions.

PEZ: The race was over for many within one hour.
It started full, full gas! I mean within two or three kilometres it had split into five or six groups; the guys in the last group stopped – there was no point.

I wasn’t in a good group but we managed to get up to the second group and then I had some luck, Radio Shack had missed the first group and they rode to close things up. When we got to the North Sea coast it was very windy and then we turned left and headed south the race just exploded. 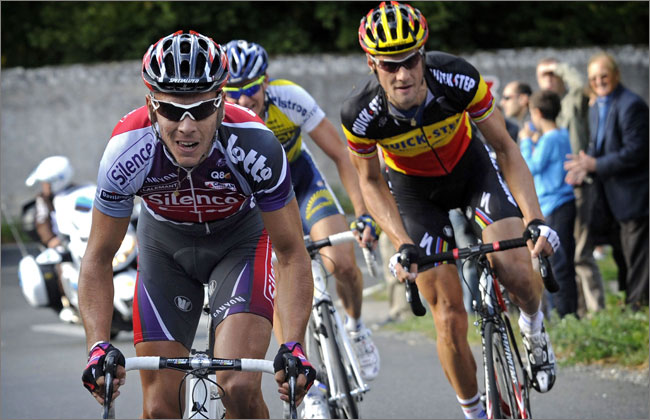 A regular amongst the front runners in the Classics for the last few seasons here’s Borut in the final 3 man break at Paris Tours ’09 with a certain Philippe Gilbert & Tom Boonen.

PEZ: Haussler said that there were guys not pulling in that final selection group of which you were part.
It’s always part of the game; with Peter Sagan there – and especially with his team mate, Bodnar there too – we knew it was ‘Mission Impossible,’ to win. Haussler, Bodnar, Peter and I were all pulling but if you take the other guys; Stijn Vandenbergh couldn’t pull because he had Cavendish behind – he didn’t do a single turn.

And Bernard Eisel was playing the Sky Game; he had team mates behind who were trying to come up. Haussler might not like it but that’s how it is when you’re racing against the big teams and their tactics.

PEZ: I saw you hesitate when Sagan went with four to go . . .
When he went, I wasn’t near his wheel and it took me a little time to react and when I did, it was too late – like I say; ‘Mission Impossible!’ Once he was gone I focused 100% on the sprint for second place.

PEZ: You rode that sprint nicely.
As I said, once Peter was gone my focus was entirely on the finish. To tell the truth, in the last 40 K I didn’t feel so good and I decided to wait and see how the sprint developed.

I came from the back and played it perfectly – it was my best sprint of the season, so far.

PEZ: How do you recover from a day like that?
On Monday I did nothing, today I did a little on the rollers but tomorrow I’ll get back to training. I just want to hold on to the form which I have.

PEZ: Do you take more than normal massage?
For sure and special stretching exercises also, I still feel very stiff from three big races in terrible conditions and the exercises help to ease the stiffness away.

PEZ: Where are you based for the Classics campaign?
We’re in a small hotel near Gent, it’s very good – we have our own chef with us. He doesn’t actually do the cooking but he’s in the kitchen to check that we’re getting the right balance of carbs, protein and vitamins for recovery.

PEZ: What sort of work do you do between races?
If you take this week, like I said, nothing on Monday, rollers today; but tomorrow will be four or five hours and then four hours on Thursday.

Friday will just be two hours and Saturday one hour; nothing special – recovery is the big thing.

PEZ: Will you lead the team for Flanders?
I have good shape and good morale and in Dwars door Maxim Iglinsky was very good there, too. That race takes in the Flanders parcours and is selective so that was positive for us.

We’re maybe not as strong as the biggest teams but I think we’ll be a positive factor in the race.

The weather can be snow/rain/sun but it’ll be the same for everyone – and it’s the racing which counts!

PEZ: This season has started so much more positively for you than last.
I feel like I’m back to the form I had in 2009, I worked well over the winter and I’m in good shape. We’re all human and we all make mistakes but for 2013 I feel that I’m back to my best form . . .

We wish Borut best of luck for Flanders on Sunday. Keep it tuned to PEZ later in the week for a full Flanders preview and on Sunday for a full race report and the best action photos in PeloPics.