Just 22 years old and a second year pro, young Frenchman Clément Koretzky was not afraid to mix it up with the best at this year’s Paris-Roubaix going in the early break and crossing the Arenberg forest ahead of the peloton in the company of three big Classics men in Matthew Hayman, Stuart O’Grady & Gert Steegmans. And all this from a man who had never even raced on cobbles before! PEZ had to find out more…..

I first met Clément in November/December last year when we got together by chance for some winter training. Kitted out in his 2012 team colors of La Pomme Marseille and with a pedalling style that just screamed ‘smooth’ it was obvious he was a pro but I’ll be honest and admit that I had no idea who he was. We trained together that day and had a good chat and what I found was a young man who was courteous, ambitious, focused and obviously full of talent.

After our first ride together I hit the French magazines and internet sites for some research on Clément’s career so far and I quickly realised that I’d just gone riding with a man who was on his way up in the pro peloton. After just one season in the pro ranks with La Pomme Marseille Clément took home numerous high placings and results which saw him labelled as one of the best néo-pros of season 2012 and he was quickly snapped up by Pro-Continental squad Bretagne Séché for 2013 & 2014.

I recently caught up with Clément in his native Lodeve in the South of France to talk about the high of his experience in Roubaix and unfortunately the low of the Tour of Turkey soon after.

PEZ: Most of our readers first heard of you when they saw you in the break at Paris-Roubaix. Can you take us through your day in your first participation in the Hell of the North?
I have no words to describe what I felt about this first ever participation in the race. I consider it to be just a big chance to even take part in it. In my opinion, it is one of the most important one-day races in the world along with the world championships. This race is really unique, and the team presentation the day before puts you in the atmosphere and the pressure starts to increase. The number of kilometers was completely new for me because it is the first time I took part in such a long race (254km long).

There was some pressure inside the team, yet I did not feel stressed about taking part in the race, simply because I consider the fact of taking part in it as being a great opportunity and satisfaction. 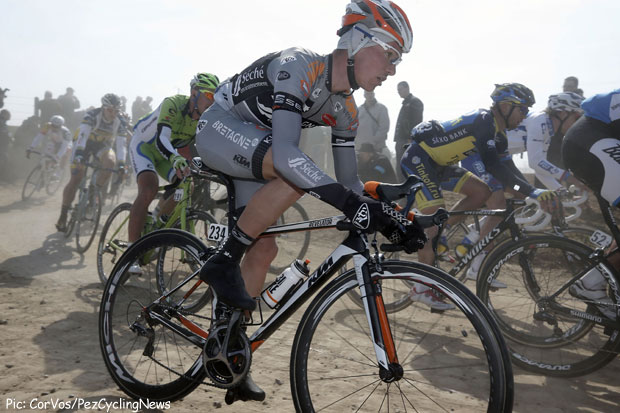 Off the front for numerous kilometers in 2 different breakaways – here’s a shot of Clément actually in the peloton that day. He would go on to finish 75th.

PEZ: And then you made the first breakaway of 13 riders only to get caught and then you went again with three big names in O’Grady, Hayman and Steegmans?
Yes, the breakaway – An intense moment in my career and an unforgettable moment for me, my family & my girlfriend. We went out of the pack after the two first secteurs pavés. Entering the Trouée d’Arenberg was an incredible feeling. I had never felt such an intense moment on the bike up to that day even now talking about it gives me goosebumps! I can still see myself on the bike at that moment again. 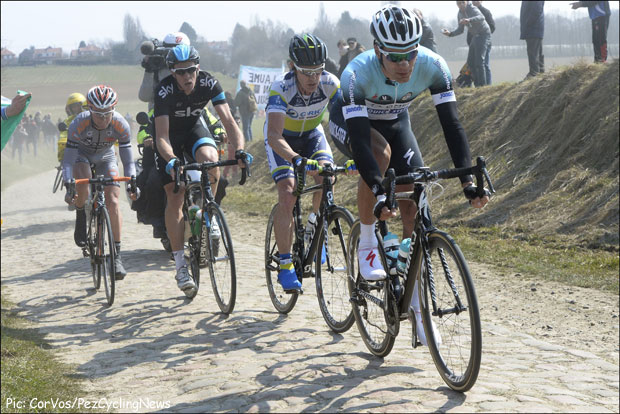 I admit I actually thought about entering the Trouée d’Arenberg first in our group of four but I could not do so out of respect for the riders who were in the breakaway with me as they are champions so I willingly went to the back of the group. 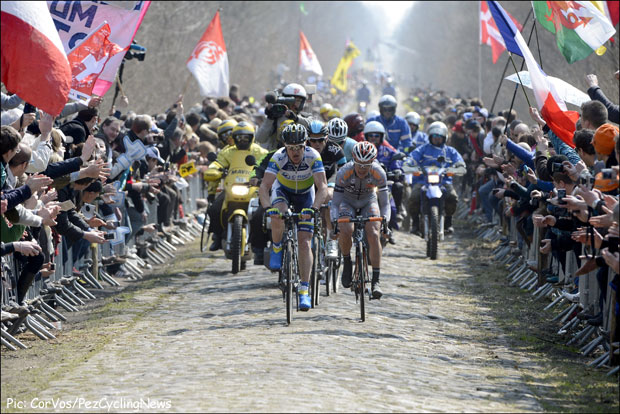 PEZ: So you certainly weren’t the biggest ‘name’ in the break that day but before you signed for Bretagne-Séché for 2013 you’d already made a name for yourself here in France with a big season as a néo pro with La Pomme Marseille. What were the highlights for you from your first experiences with the pros?
Before I signed for Bretagne-Séché Environnement, I could take part in several famous races with the team La Pomme Marseille, my previous team. I finished 3rd in the first stage of the Critérium International; I finished 2nd on the first stage of the Tour du Haut Var, or the Grand Prix de la Somme where I also came 2nd. It was a real pleasure living this first year as a professional cyclist, because I could devote all my time to my career. It was the first year that I could dedicate myself to the sport 100% as until 2011 I had to combine my studies with cycling which was not always easy.

In 2012, I could stand out thanks to the way I race but also my results. Several teams were interested by me but I chose Bretagne-Séché Environnement. This team was the one whose race program fits me the best, and they also want to give me the opportunity to play an important part in the races. 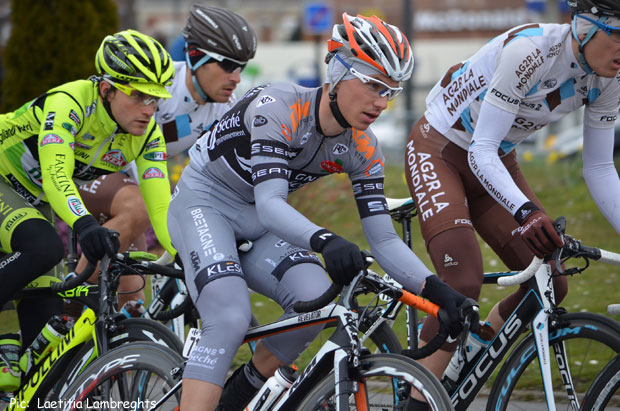 PEZ: Has the step up to Pro-Continental been a big one? Is there really a big difference between the two levels?
The level is higher indeed. I’ve felt a difference – at mental as well as physical levels – joining this team. This team can take part in more important races and offers the opportunity to take part in two races at the same time as they are bigger than the previous one with 17 riders against 10 last year.

My race program is similar to the one I had last year. However, this year, I can aspire to taking part to bigger races such as Paris-Roubaix, the Dauphiné Libéré or even the Tour de France – although we didn’t get invited this year!

PEZ: Unfortunately with your recent accident in Turkey you’ve been ruled out of participating in the Dauphiné which was obviously a big goal for you and your team. When do you think you’ll be back to competition and what races are you looking forward to?
I severely broke my collarbone on the 24th April in the Tour of Turkey and it’s been a very difficult time for me. Fortunately I’ve had my family, girlfriend and my team who have really supported me during this period. 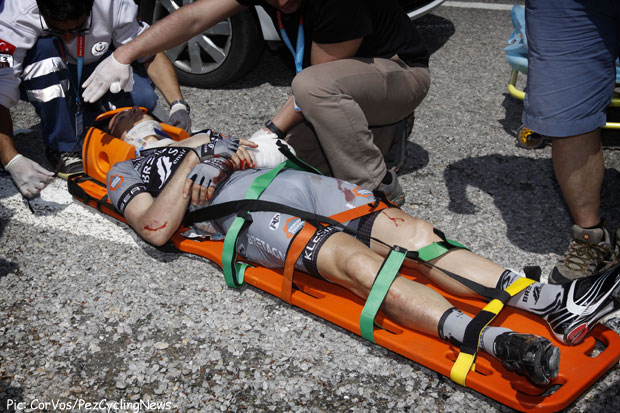 From the highs of Paris-Roubaix to the lowest of lows at the Tour of Turkey.

My director confirmed to me that I would have been going to the Dauphiné except for this terrible crash so it’s very frustrating. I’ve had to get out of my head the dream of particpating there which is very tough and at the moment I’m really missing not racing. I’m following the directions of the surgeon who operated on me though and you can’t rush these things. My collarbone ws actually broken in 4 places and I had to have an operation which was pretty complex where they inserted 7 screws and a plate to strengthen my collarbone so I could get back to my job as soon as possible. I also had to pass a full catscan to check that I didn’t damage any vertebrae as it was a very violent accident.

I’m hoping that I can get back to racing for the French National Titles (23rd June) but I’m waiting on confirmation or not from the doctor. I really can’t wait to race again though!

PEZ: In watching you in Paris-Roubaix this year you looked at ease on the cobbles despite the fact that living in the South of France you don’t have any cobbles to train on. Was this your cross/mtb background that helped you?
Well I started cycling at 10 years old after trying a number of other sports. First I did MTBing, then a little road riding, then a little cyclocross. In the South of France it’s true we don’t have the cobbles but we do have some super circuits for MTBing and cross where I could work on my technique. I think it’s the MTBing plus the cross which gave me my technique today.

So yes, even if it was my very first race on cobbles I thought that I could handle the cobbles ok – which I did!

PEZ: Your brother Victor was World Junior MTB cross country champion in 2011, do you train together?
Yes my brother was twice World Champion and two times silver medallist in the mountain bikes and he helps me a lot to push my limits.

We only train together sometimes because his training is more centered on the dirt and me on the road. When we do train together though we train hard and we share a lot for progressing and improving together. 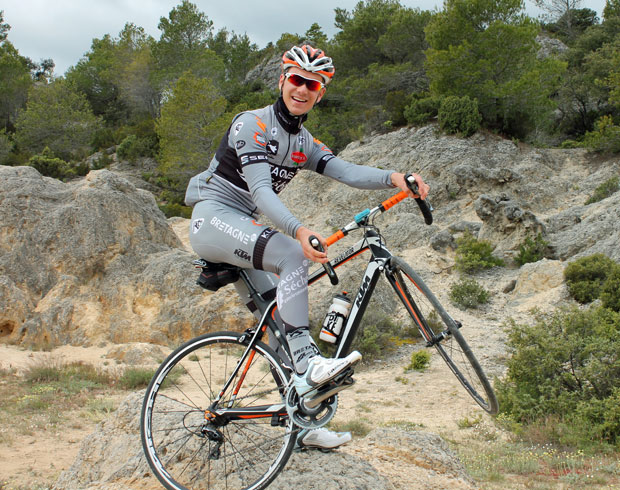 PEZ: Is there any sibling rivalry between you and does he have any plans to follow you into a professional road career?
We’re actually really close but there is a good amount of competition between us to see who has the best results or who can beat the other in training – I love this competetive spirit between us! We help each other and give advice to each other. It wouldn’t surprise me to see him one day have a try on the road but I think for the moment he will stay with mountain biking as he told me that he prefers it and wants to make a career on the dirt first.

PEZ: You live in a pretty amazing area for cycling and this year you’ll have a Cyclosportive in the region named in your honor. How did that come about? And can you tell us a little bit about the course?
Effectively, yes it’s a great region for riding with some really beautiful countryside. It truly is great to go cycling in this region. When I first started cycling when I was just really young I did it most of all just to visit and discover my region before cycling became my job. 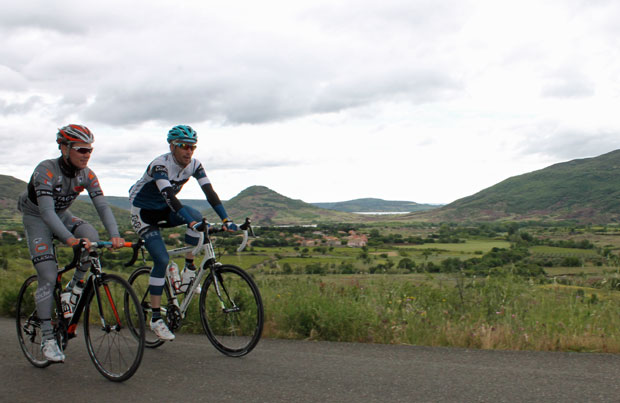 Clément showing your scribe a part of his cyclosportive circuit

This year, yes, the Cols de l’Herault Cyclosportive will be named after me. I’m super honored that they did this for me! I live in Lodeve which is in the region Languedoc Roussillon in the department of the Hérault and this cyclo will go through my training area and take in a number of the local climbs.

The riders will experience the truly magnificent countryside and scenes in the back country behind Lodeve. For me it’s one of the most beautiful cyclosportives in the South of France!

A video flyover of the 139km circuit