The first Belgian races have almost begun, the World Cup starts next month and there are only 8 days, 9 hours and 7 minutes to Cross Vegas (accurate at time of writing). Yes it’s crept up on us – it’s that time for the men who start like kilometre riders then bang out the same watts as a top chrono man but through sand, mud and snow.

Cyclo-cross, love it or hate it; but ‘cross and the six days are all there are for you over those long winter days and evenings. Personally, I love it; one hour ‘a bloc’, no time for finessing, there’s beer tents, frites, mad fans – with the stars having the grace of ballet dancers coupled with bear-like strength.

With Belgians taking the first seven spots in the World Elite Championship in 2013 and the same number of Belgians ranked in the top ten in the world, it’s a tough game to break into. But one man who’s taken the challenge on is reigning British Elite Champion, Ian Field.

Field took time out from the grueling training schedule set for him by new coach – former Pro Tour rider, Dan Fleeman – to talk about his plans for the new season. 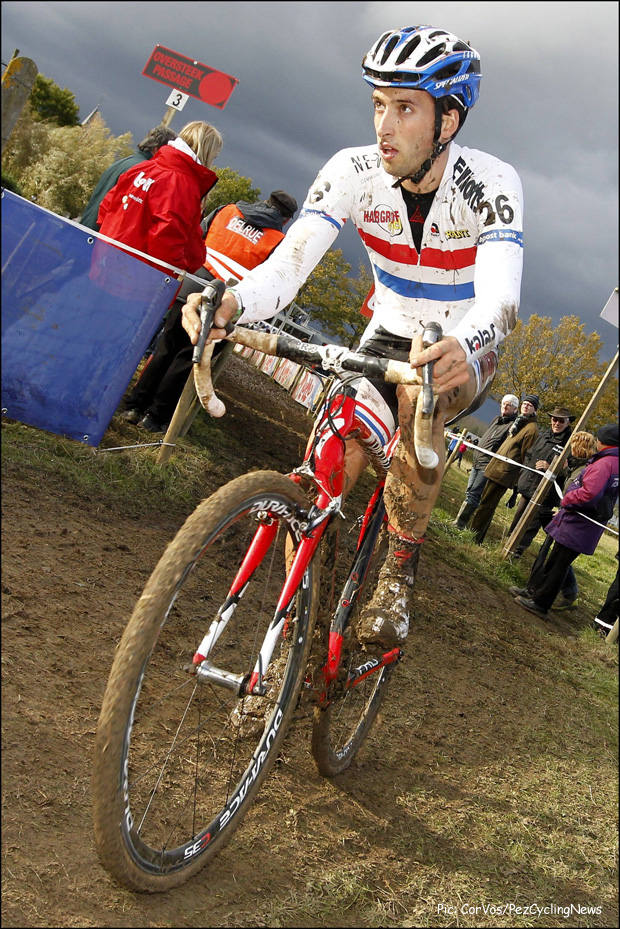 PEZ: You successfully defended your British title Ian; they say it’s harder to defend than to win for the first time . . .
I guess there was a little bit of that but there’s always pressure on me because I’m really the only British full time ‘cross professional. If anything, I was perhaps a little more relaxed – I had the monkey of winning for the first time off my back.

PEZ: You’ve been riding the US ‘crosses to start your season these last two years.
Yes, the Worlds out there were massive; a good course, huge crowd, good TV – it was just a pity the issue of course flooding meant they had to run all the races on the Saturday.

The ‘cross scene there is really big but I’m not sure it’s grown as a result of the Worlds – I think that they were maybe a make or break for the sport out there. You would think that the sport would have exploded after the Worlds but they’ve actually lost the US Grand Prix Series for this winter. But Sven Nys will ride Cross Vegas this month and the rumour is that he’ll be on a Trek from January 1st which will give the sport a boost out there.

PEZ: You’ve picked up some nice UCI points over there.
That was the idea, to pick up UCI points so as I could move up the starting grids at the World Cups and Super Prestige events. I won’t be out there this season, though – I’ll stick to a Euro programme. I feel that all the travel and early start to the season in the States takes a lot out of you.

I’ve proven that I can win in the US and at home in Britain – it’s time to step up and prove myself in Europe.

PEZ: How do you stand in the UCI rankings?
I was top 30 two seasons ago but slid out of the top 30 last year because I lost a lot of time with my dislocated shoulder. I’ve had top 15 and top 20 finishes in World Cups and Super Prestige races and was in the top 30 at the Worlds.

My aim this season is to have regular finishes in the top 20 in World Cups and Super Prestige – what I want this year is consistency.

PEZ: What were the high lights of season 2012/13?
There weren’t too many! I had a good, steady start as I built up for the Nationals and Worlds. I was on course for a top 15 at Koksijde but punctured at a bad time and then at the start of December I dislocated my shoulder. I was training indoors but it’s not the same and I missed the big block of racing at Xmas in Europe.

I guess retaining my British title was the high light; I set out to win it well, to dominate it – and I think I did that, leading from 400 metres out ’til the finish. 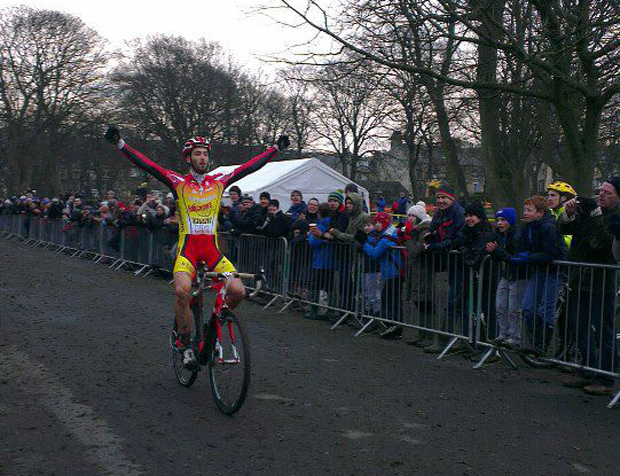 Taking the win at the Nationals after leading the whole race.

At the Worlds I was in the top 25 ’til 20 minutes to go but the loss of December meant I didn’t have the strength and I slipped to 29th place. It’s my best Worlds to date but given my build up to it I was half happy with it.

PEZ: How much support does the British Federation give you?
It’s a little disappointing – I thought it was changing, but only for the Worlds where I got great support. Which makes it all the more disappointing because you think; ‘this is what it could be like!’ There are things that you never think about – like they’ll enter you for the World Cups but then there’s no one to attend the managers meeting. But maybe this will be the season where ‘cross gets recognised? If you look at British Cycling you’ll see that many of the big names like Ian Stannard and Ben Swift started off by riding ‘cross.

PEZ: How did the summer training go?
It was good, I took a relaxed approach, riding some road and MTB – I just tried to build up steadily for the ‘cross season. Signing up to work with Dan and his Dig Deep Coaching has been a nice distraction. 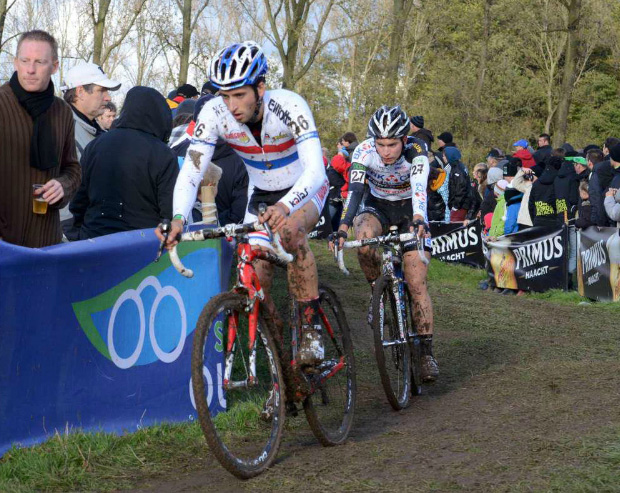 PEZ: What are your strengths and weaknesses?
I need more strength – build my endurance base; I’ve just turned 27 so I think I’m coming to a stage in my career where I’m at my strongest. I’m strong technically and good on the hillier courses where my light weight is an advantage – I race at 64/65 kilos. The Koppenberg Cross is the one which suits me best – I’ll be trying to crack the top 15 in that one.

PEZ: Why go with Dan and Dig Deep?
He’s focused me more on the ‘why’ of training and I now train in a more specific fashion on every ride – there’s a reason for everything I do, now. I’ve refocused on what I want to achieve and what the steps are along the way – I suppose he gave me a kick up the backside! And it’s been fun working on the Sufferfest training videos with Dan – they’re based around how I train and I think they’ll be a big help to anyone getting into the sport.

PEZ: What’s the plan for 2013/14 season?
The first race of my Belgian season is September 15th with the BPost Bank Trophy – the old GVA Trophy – kicking off then four weeks later we’re into the World Cups and Super Prestige. My aim is consistent top 20 finishes – I’ll take a break at the start of December then build for the big Xmas racing block and the Nationals and Worlds.

PEZ: And still with Hargroves Cycles and Specialized?
Yes they’re backing me again; it’s good for me because I have stability in my preparation and it’s also good to see your loyalty to your sponsors is appreciated. The Specialized Crux is a really nice ‘cross machine, full carbon and certainly the best ‘cross bike ever ridden.

It’s based on the SL4 road frame; I have one for the road but train on an SL3 and I’d say the Crux rides better than the SL3. Colnago and Ridley are the big names in European ‘cross but I think that Specialized will make inroads with the Crux. 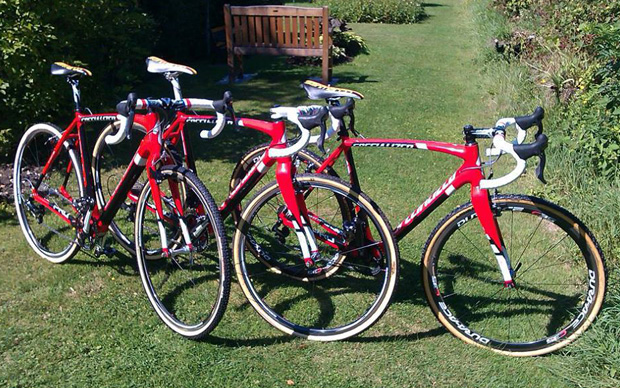 Ian’s stable of machines ready to take on the season.

PEZ: And do you have ‘rubber for every occasion?’
You do need a lot of wheels, that’s for sure. But Hargroves have been very good and I have wheels and tyres for just about every parcours. I’m riding Challenge tubulars which are as good as Dugasts in my book – and they give me as many tyres as I need. I was actually involved in the development of a new tyre – Helen Wyman and I tested it for them; it’s really only in the last few seasons that treads have changed much since the 80’s.

PEZ: The 2014 goals, then?
To ride consistently in Europe; top 20’s in the BPosts, World Cups and Super Prestige. I want to dominate the UK ‘cross series rounds which I ride – I won’t do the full series – and the Nationals and generally show what I’m capable of.

# And if you’d like to know more about Ian and Dan’s Sufferfest training, you can find the Novice CycleCross Plan and the Intermediate CycloCross Plan both at thesufferfest.com