Interview: If the name Calvin Watson doesn’t mean much to you now, it soon will – he’ll be part of pro cycling’s new Trek Factory Racing team lining at the Tour Down Under. The 20 year-old Australian joins Fabian Cancellara and the Schleck boys in one of the highest profile teams on the planet.

It was 2010 when Watson first appeared on the radar with a fifth place in the junior Liege-Bastogne-Liege and sixth in the junior Worlds.

The following year saw a raft of good performances in Europe and a win in the junior Tour du Valromey in France.

Last year (2012) saw him third in the Aussie U23 road champs and riding strongly in Italy.

But the ride which really caught the talent scouts eye came in early 2013 when he joined the likes of Bradley Wiggins, Stuart O’Grady and Simon Gerrans as a winner of the Herald Sun Tour.

He took time out from his preparation for the Southern Hemisphere’s biggest race to talk to PEZ about his career so far and the new challenges he faces: 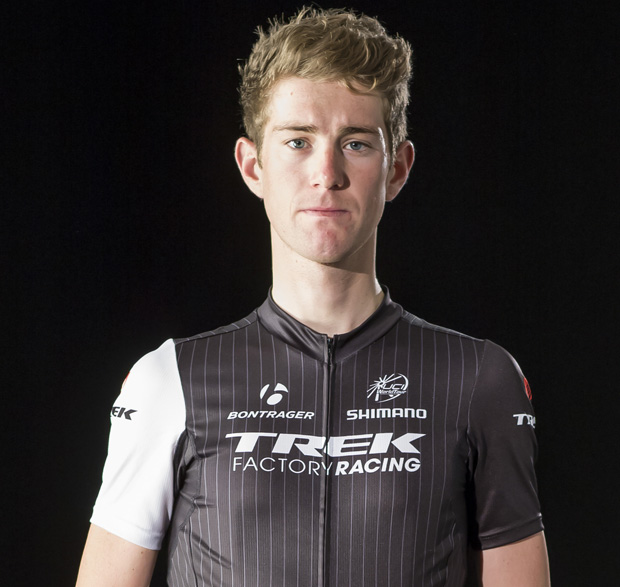 PEZ: How did you get into cycling, Calvin?
From a young age I started riding, just on a BMX around the local streets. I loved all sports but couldn’t decide which one was my favourite. But at the age of 10 I got my first road bike and from then on, there was no looking back! I began racing at the age of 12 and slowly began to progress through the junior ranks.

PEZ: Did you have role models as a youngster?
I think all young riders have role models, for me it was Simon Gerrans. He has been a very influential person in my development. He’s a prime example of a great champion on and off the bike and he’s someone I will continue to admire.

PEZ: I believe ex-Aussie track star Dave Sanders was a big influence?
Dave has had a big influence on me; he was my first coach and someone I will continue to work with. We have a great relationship and he knows me very well. Without his support I wouldn’t be in this situation.

PEZ: How would you describe yourself as a rider?
It’s hard to pin point one area that I’m really strong in. I’m more of an all round rider who can climb well and time trial ok. Being young I don’t think I’ve really found where my true strengths will lie for the future. But these next two years I hope to find where my true qualities lie in the World Tour.

If I can progress and develop into a stage race rider, that would be the ultimate goal and ambition. 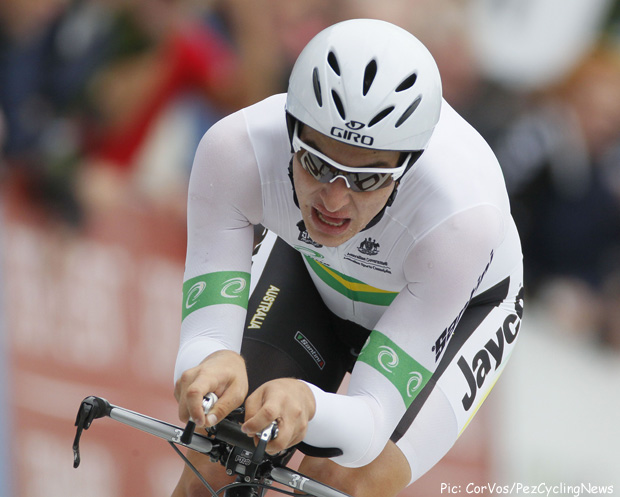 Riding at the Junior Worlds in 2011

Also winning it on my local training roads with my family and friends there to support me was quiet special. 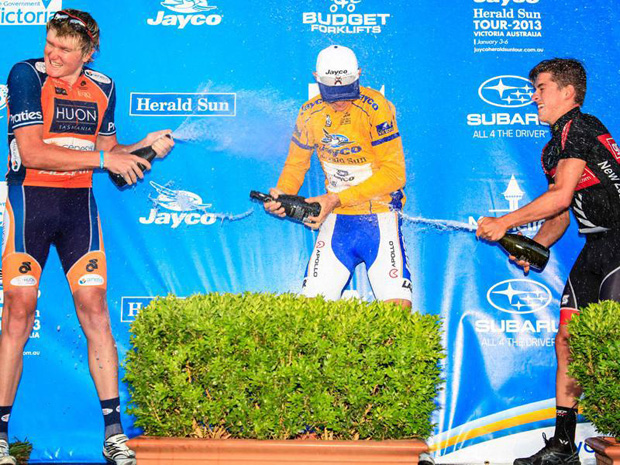 Celebrating the GC win at the SunTour

PEZ: I believe you had a bit of an “experience” on an Italian team?
In 2013 I spent two months riding with an Italian amateur team, it was something I was excited about. Trying to learn a new language and integrate into a new culture. It was an interesting experience and one that was very challenging. But I was very happy to move back across to the Australian National team for the second part of the season.

The U23 program which the AIS provides young Australians with is a great set up and it gives young guys a really strong pathway to learning and developing in European racing.

PEZ: Alex Carera is your manager – no messing there.
I am lucky to have Alex as my manager; I’ve been working with him for two years now and I do believe it’s important for young riders to work with a manager. The cycling industry is fierce and it’s important to have someone guiding you in the right direction.

PEZ: You’re at training camp just now; tell us about that.
At the moment I am away training and preparing for the Tour Down Under. It’s nice to be away and focus only on training and recovering, getting the best out of yourself.

Being my first year in the World Tour it’s important to start the season well, and the idea of this camp is to get a good base of training for the first part of the year.

PEZ: And what about being a ‘rabbit’ at the first camp?
The ‘Rabbit’ outfits at the training camp were quiet funny, being a neo pro I think we all expected something to arise. I think it’s a bit of a tradition for all neo pro’s to have a funny trick played on them a team camp. But we had fun with it! 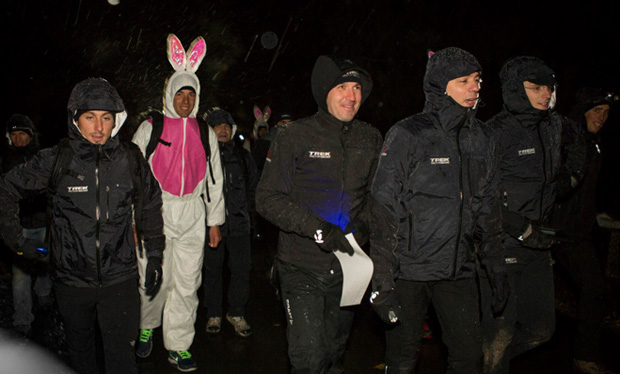 PEZ: It must be good to have a guy like Voigt on the squad, with all that experience.
Having someone like Jens in the team is really great for the young guys; he has a wealth of knowledge and is a real character. In Spain last week I had a chance to hear some of his great stories; he’s someone I look forward to spending time with throughout the year to learn from.

He also keeps the spirit and moral high on the long training rides – and that’s important!

PEZ: I believe Danilo Hondo to be the coolest man alive, have you seen anything that should make me think to the contrary?
Ha! Danilo is a great guy. I got to spend some time out training with him and he’s a class act. He’s another example of someone who can guide the young riders in the right direction.

PEZ: Has your programme been discussed, yet?
As for my racing program I know my first half of the season, though things can always change depending on performance. At this stage I begin at the Tour Down Under then travel back to Europe.

My first European race will be the Ruta del Sol, then Sud Ardeche, la Drome, Volta Catalunya, Tour of Romandie, Tour of California, and Criterium de Dauphine. After that I will take a break and re-charge for the second part of the year.

PEZ: The Tour Down Under as a first race must be a cool way to kick off?
The Tour Down Under will be a nice race to start with; after racing it last year I know what to expect. It will also be the first race for the new team so I’m expecting it to be a big affair. We have a super strong all round team so I’m really exciting to get the ball rolling there. And being in Australian it will be nice to have my family there to see me race in the new colours! 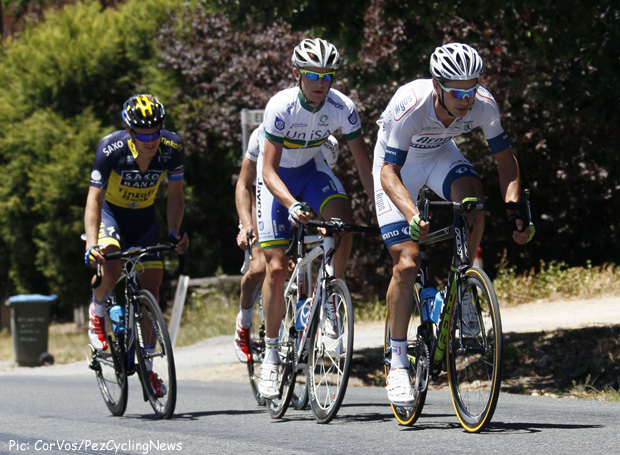 PEZ: Will you be coached by a member of Trek staff, now?
I’m working with the team trainer, a Spanish guy. I’m really excited to be working with someone who has my individual interests in mind. My training has changed a lot already with much more specific work so I’m excited for the change.

PEZ: Where will ‘home’ be in Europe?
Next year I will be based in South of France; it’s a great area for training and the weather is generally nice. There are also a lot of Australian riders based there now and it’s great for me to be around guys who I can learn from and who are good mentors. It’s like a home away from home.

PEZ: How’s the new bike?
The new Trek is a great bike, the new designs are great and Trek is doing a great job in working with everybody’s individual needs and goals.

PEZ: Season 2014 is all about . . . ?
Season 2014 is a year for me to learn and develop making a steady progression into the World Tour. I’m taking a big step up; and the program I am following is calculated for me to be consistent throughout the whole season – exciting times!

LAMPRE-MERIDA flies to Argentina for the debut of its stars