Argos-Shimano isn’t the usual destination for US neo WorldTour pros in these days of BMC, Cannondale, Garmin and Radio Shack. But The Netherlands is where 25 year-old Texan Chad Haga is bound for in 2014. A pro with Optum-Kelly since 2011, his first big results came in his neo pro year with a win in the prologue of the Mount Hood Classic and third on GC in the Tour of Elk Grove. 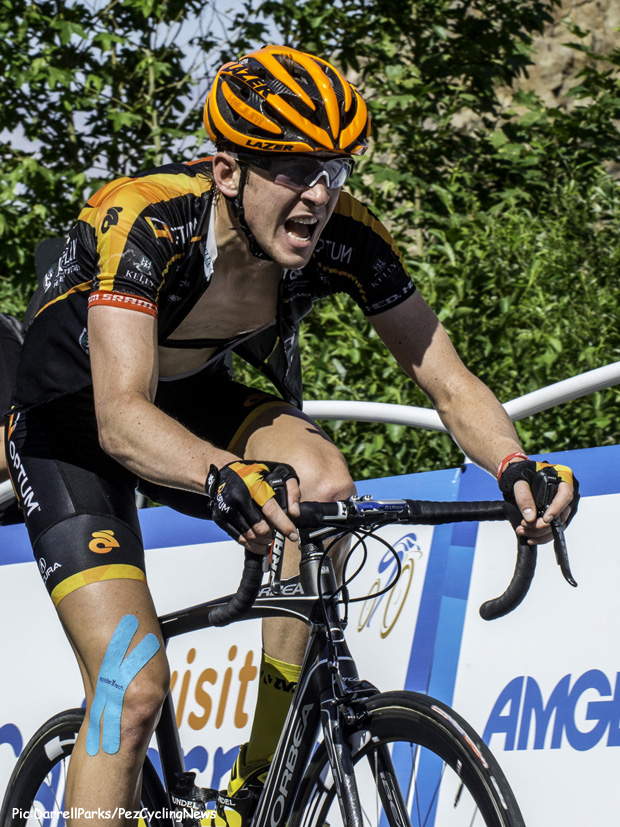 PEZ caught up with him before he rode the Tour of Alberta, where he grabbed sixth in the prologue behind Peter Sagan.

PEZ: I’m intrigued by your nicknames – where do they come from?
Chad Haga: My list of nicknames is long. Several of them are simply mispronunciations of my last name – which is correctly pronounced ‘Hayga,’ my mother would have you know. Sounded out, these include Hagga and Hogga. I picked up ‘Hagasaki’ during my first week on the Texas A&M cycling team – you may have seen one of them on Mt. Diablo dressed as a giant Domo. Lawson Craddock gave me the regrettable ‘Lady Haga’ (again stemming from a mispronunciation) back in 2010. My Optum teammates Alex Candelario and Ken Hanson started ironically calling me ‘Bad Chad’ last year, while our soigneur Amanda affectionately named me ‘Chadley.’ I’ll answer to just about anything these days…

PEZ: Why and how Argos – do you have an agent?
I was attracted to Argos-Shimano primarily because they focus on developing up-and-coming riders. I also appreciate the way they race, which is to race to win or go down swinging. There are few Americans on the squad, but everyone speaks at least some English, another key selling point for me is that my director on Optum, Jonas Carney, is friends with one of the Argos-Shimano directors and was able to put me in touch with them. From there, I just had to continue producing results and things would work themselves out. As such, I signed without using an agent to ensure that I got my foot in the door.

PEZ: Have you met any of the Argos guys or has it been email and Skype?
At the Colorado Pro Challenge, I was able to meet some of the staff in person, but it has primarily been email and phone up to this point. I’ll have more opportunities in the coming weeks as I race against them at the Tour of Alberta.

PEZ: Do you have an idea of your programme yet?
Nothing is set in stone, but it looks like I will start the season with the smaller week-long stage races before returning to the U.S. for the Tour of California. 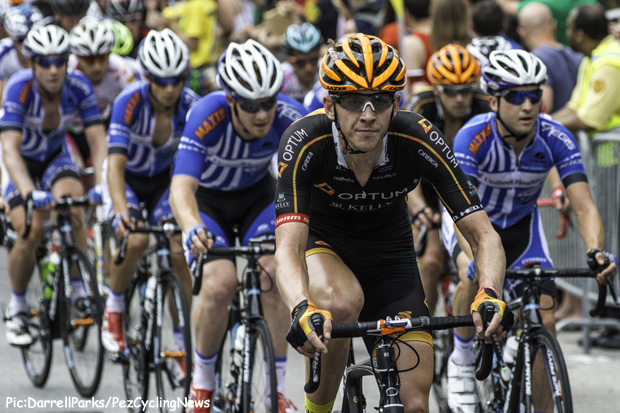 Leading the blue train in Philly this year.

PEZ: What are you looking forward to about the adventure?
I thrive on being challenged, and being the underdog, so I look forward to the chance to prove myself against the best in the world on the largest stage.

PEZ: And what’s scary?
I’m most scared of the lifestyle change that will accompany a move to the World Tour. Living in a new country where I don’t know the language is incredibly exciting, but also the primary source of my anxiety.

PEZ: Your prologue and TT talents must be something the team wants to develop?
Absolutely, and I’m just as excited to work with them to continue improving. So many stage races hinge on the time trial if there are no other selective features, that being able to consistently finish atop the results in time trials is a huge advantage. 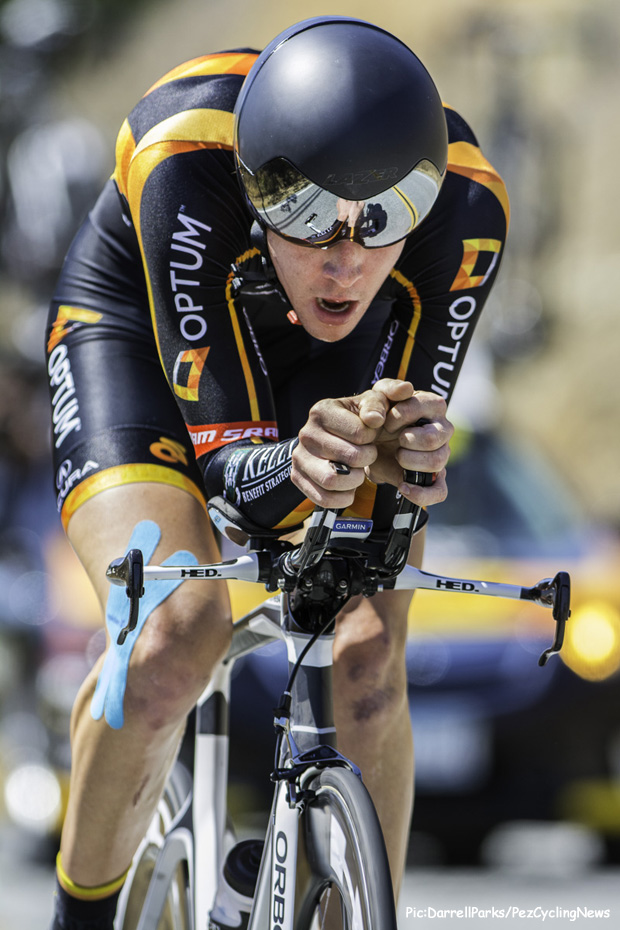 PEZ: Has the team given you any guidance on how they want you to prepare for next season?
I’m not done with this season yet! Once we wrap up this season at the TTT World Championships, I’ll enjoy a relaxing off-season and then we’ll set to work preparing for next year. This late in the season, thinking about the next one too hard might just make my head explode . . .

PEZ: Do you have a coach – will he dovetail with the team on training schedules or is that 100% down to the Argos staff?
I’ve been coached by David Wenger of Durata Training since 2010, and I’d say it’s worked out fairly well. Going forward, I’ll be coached by the Argos staff, but I think a cooperative effort between them and Wenger (who knows me so well by now) could really be beneficial.

PEZ: It must be a wrench to leave Optum-Kelly after three seasons?
That’s what made the decision most difficult, knowing that moving to Argos-Shimano meant leaving Optum-Kelly Benefit Strategies behind. The entire team, staff included, is such a fun and close-knit group that I will be very sad to leave.

PEZ: Where will ‘home’ be in Europe?
For my first year over there, it’s best if I stay close to home base for the team, which means I’ll be calling The Netherlands home during the race season.

PEZ: You were a BMX/MTB kid – how helpful has that been to your career?
BMX and MTB taught me to have fun on a bike. It wasn’t something just for exercise, but a real-life video-game. Practically, they taught me handling skills to avoid crashing – and how to crash in a way that minimizes injury when things do go wrong.

PEZ: In 2013 you definitely moved up a level – why do you think that was?
2013, in my mind, was simply the continuation of a steady progression since I started racing on the road in 2006. Last year, though, we only got a few glimpses of that improvement between all the setbacks that I experienced. This year, however, we saw just how well things can go when it all goes right.
But to someone who wasn’t watching me closely before, it did look like I took a big jump upward this year.

PEZ: How was Utah for you?
Utah was always going to be a tough race, but was made even more difficult by finishing the Tour of Elk Grove just two days prior. I was very comfortable during the first few stages, saving my matches for the later stages. By the time we got there, however, fatigue had set in and I didn’t have the legs we were expecting. Our team goal for the season has been to return to TTT Worlds, so we needed to rake in the points at Elk Grove and hope for the best in Utah. We succeeded, so I can’t be too upset about a disappointing Utah. 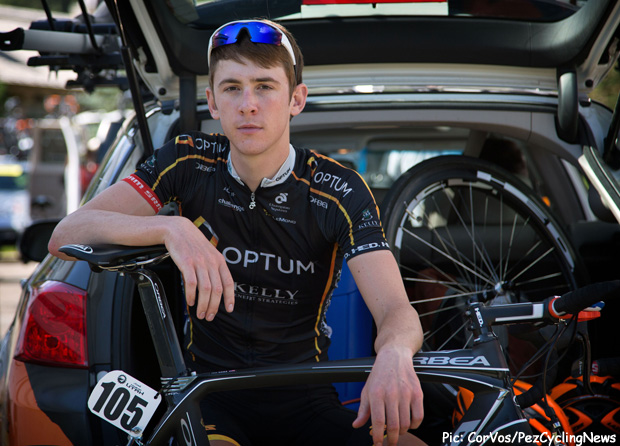 Downtime in the trunk at Utah.

PEZ: Tell us about your piano playing – is that something you could have pursued as a career?
My reputation as a concert pianist has become a bit overblown, in my opinion. I have performed in several small concerts and innumerable times in church during high school, but was never quite good enough to enter competitions. If I were willing to practice for hours and hours every day, I could perhaps get to that level, but my heart isn’t in it. I’m satisfied with being the hotel lobby entertainment at bike races for now.

PEZ: Does that mechanical engineering degree ever come in handy in your cycling career?
It’s not often, but once in a while it comes in handy. When debating whether to make a bike change in the Tour of California TT, I busted out some physics calculations. You also never know when the team van will pass the time with science trivia.

PEZ: Season 2014 will be a success, if . . . .
I always race to win, but if I can finish the year as a stronger and smarter racer and a better teammate than I started, I will consider that a success.

Determined Team Colombia to look for chances at Il Lombardia