One of the disappointments of next season for me will be that there’ll be no orange legions in the Pyrenees screaming on their Euskaltel idols in le Tour or the Vuelta. The Basque team will fold at the end of this season and although it looks like they’ve found a saviour in Formula 1 hero, Fernando Alonso the Orange team as we know it will never be the same.

One of the men who’ll be most affected by the departure of Euskaltel is multiple Greek, Balkans, Mediterranean, European and World Championships medallist, Ioannis (or Yannis) Tamouridis. Euskaltel abandoned their ‘Basque only’ recruitment policy at the end of season 2012 – in search of riders with those vital UCI points. As Elite Road Race and Time Trial Champion of his country, not to mention a whole host of wins and placings in the Balkans and North Africa, Tamouridis fitted the bill perfectly. 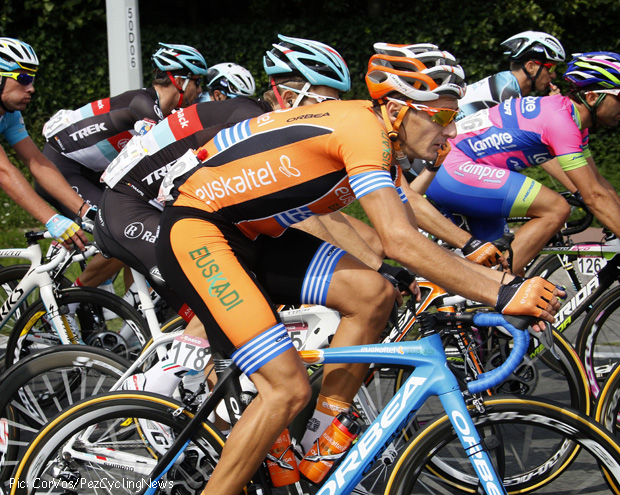 Ioannis showing off his one of a kind Greek Champion’s Euskaltel jersey at the Eneco Tour earlier this year.

He won his first Greek national championship as a junior in 1996 and since then there’s not much on his national calendar he’s not won; MTB, pursuit, points, scratch, time trial and road race. He’s also won medals in the regional Balkans, Mediterranean and European Championships and picked up Worlds silver in the points in 2005 and bronze in the scratch in 2006. But the boys in orange didn’t want him to whizz round velodromes – no sir.

The Ruta del Sol, Tirreno-Adriatico, Milan-Sanremo, the Scheldeprijs, Paris-Roubaix and Giro are all notched on his top tube for season 2013. PEZ caught up with him at home in Thessaloniki as he prepared for his autumn campaign.

PEZ: Tell us about cycling in Greece please, Ioannis.
Ioannis Tamouridis: It has zero recognition and most guys ride the track, there are no endurance athletes. It’s a shame because the weather over the winter is so good for training – but from June to September it’s very hot, more than 33/34 degrees.

PEZ: How did you get into cycling?
My dad was a runner and there was always sport going on in our house – I was into athletics, basketball and football. Then when I was 14 I was introduced to cycling by a friend and I became enamoured of pro cycling and decided that’s what I wanted to do. I started to get good results and went to Italy to race when I was 19 years-old.

PEZ: You’ve been a prolific winner on the track – do you miss it, will you go back to it, eventually?
I have that hope in my mind – what would be ideal for me would be to stop after Rio if they re-introduce endurance events. There are rumours that they may bring back the points and madison for 2016. In my career I’ve won medals in every competition except the Olympics – to win one in Rio would make my career complete.

PEZ: You rode for Greek Continental team SP Tableware for four years before you signed for Euskaltel, tell us about that team.
If you look at my career I started on the track then moved to Italy when I was 19 to race for an U23 team. That was hard work for a young guy on a foreign team in a foreign country. So when I went home I turned to the track but unfortunately missed my home Olympics in Athens because I came down with a virus. But from 2005 to 2010 I rode track, winning medals in the Europeans and Worlds as well as Greek, Balkans and Mediterranean titles. It was a good time because I was winning prize money and the Greek Cycling Federation provided a lot of support. But then came the economic problems in Greece and the Olympic cycling programme was altered to exclude points and madison so the Federation couldn’t continue it’s support for me.

That’s when I turned to the road with SP Tableware – we made a lot of good results. The team’s sponsor was very good, the company president loved cycling – it’s very hard to find people like that in Greece. He put money in and we got strong results for four years riding mainly in the Balkans; I was in the top 25 on the UCI European Tour. 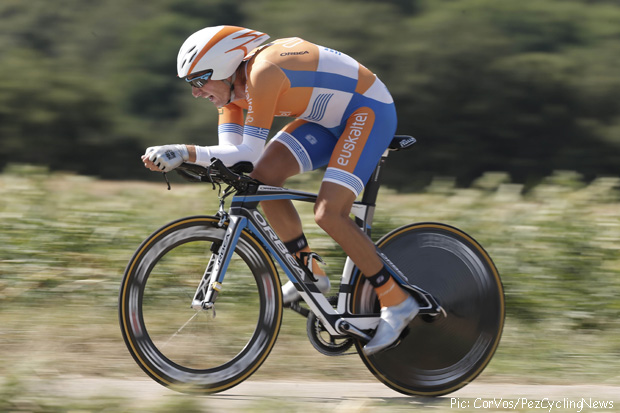 Track, time trial, MTB – Ioannis can do it all.

PEZ: You were on fire in 2012.
The last two years I had a lot of wins, yes. Not in France or Spain but in Romania, Bulgaria and Serbia – countries like that. And I rode the Olympic Road race in 2012; that was something special – I wasn’t going to win a road medal but my dream is to be in the fight for an Olympic medal on the track.

PEZ: How did you get the ride with Euskaltel?
I have a very good relationship with the ex-top road and track professional Giovanni Lombardi – he was manager of the Argentinean team at the time I spoke with him about getting a ride with a World Tour team with my UCI points. The financial situation in Greece had become very bad and there was just no money. Giovanni spoke to a friend of his who manages riders in Spain and he agreed terms with Euskaltel.

PEZ: You turned full pro quite late at 32.
I’d like to have started earlier but in Greece medals are more important to the Federation than saying they have a rider in the Giro. I was actually signed to the Geox team a few years ago but as you know, it folded.

PEZ: You’ve had a top race programme, this year.
Yes, I’ve ridden Milan-Sanremo, Paris-Roubaix and the Giro. The programme was tough but it got me into condition to get through the Giro. I was a little scared thinking about the Giro but Samuel Sanchez spoke to me before Tirreno and said; ‘the Giro is the same level as Tirreno, just longer – so if you get through this then you can handle the Giro.’

Samuel is a really good guy and great captain of the team – he’s always there to help his riders. My job in the Giro was to protect Samuel on the flat, fast stages and I think I did my job for him. 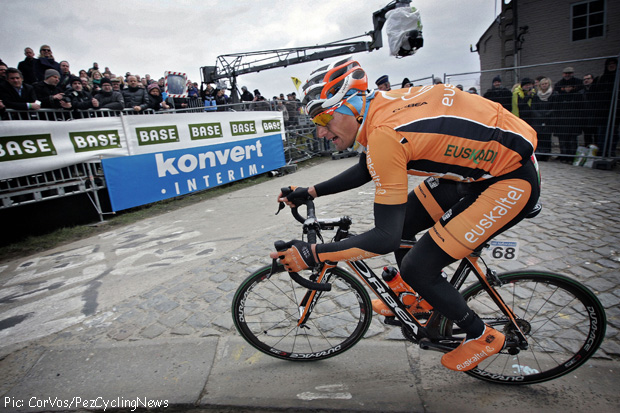 PEZ: I’ve heard they speak Basque most of the time on the team?
No, they usually speak Castellano – ‘Spanish’ you’d say – I can speak Spanish, Italian and English so communication has never been a problem.

PEZ: What was it like stepping up from a Continental team to the World Tour?
The level of organisation is amazing with all of the cars, buses and mechanics trucks. As a rider all you have to worry about is doing your job – training and racing. I’ve ridden the Worlds and Olympics so I was familiar with what it’s like to compete against these riders – but to be racing at that level all of the time is something else. All in all it’s a huge difference.

PEZ: 2014?
Obviously I’m speaking to my manager but it’s going to be difficult to get another World Tour ride – I’m a rookie at this level and there are many experienced riders in the same situation. But we’ll search for a team – and although I’m not young I’m not burned out because I spent a long time on the track, not riding the races which exhaust your body. (Ed’s note: This interview was done just before the Alonso announcement and at the moment Ioannis and the whole team are still in contract limbo.) 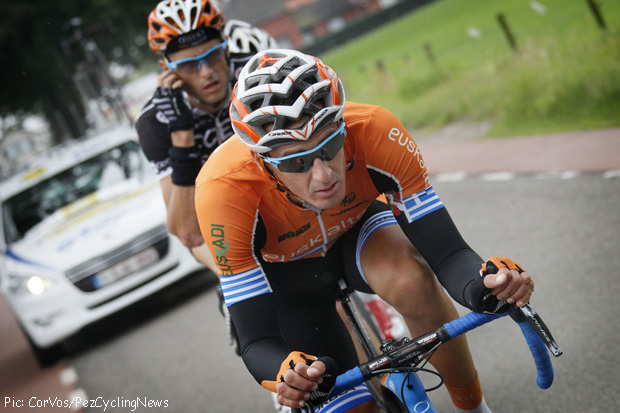 On the attack in the Eneco Tour.

PEZ: What was your best ride ever and what’s still ‘to do’ for you?
My best ride was silver in the Worlds Scratch in Los Angeles in 2005 – that was the first medal Greece had won at the Worlds in 100 years so it was a big deal. My big goal and dream is to win an Olympic medal on the track – so I have to keep going until Rio! It’s not as if I feel tired – I feel better and better as each season goes by.

PEZ: What’s still on the agenda for 2013?
I have maybe 10 to 15 single day races including Paris-Brussels and Paris-Tours still to ride. I don’t think the Federation can afford to send me the Worlds, though – and I think maybe the parcours in Florence may be a little too tough for me anyway!