It’s a measure of how seriously the home teams take the Tour of California that several have made the long trip to Europe to expose themselves to the level of the World Tour outfits they’ll encounter come May. Optum presented by Kelly Benefit Strategies rode an Iberian campaign which saw their big finisher Ken Hanson take two wins in Portugal and two third places against top line opposition in Spain.

Hanson enjoyed his best year last year but has been pro since 2007 when he signed with BMC. That year he was a member of the winning TTT squad in the Giro del Friuli Venezia. Racing as an Elite 2 in 2008 there were wins in the US and a stage in Ireland’s manic Ras. Team Type 1 was the name on the jersey for the next two years with a second in the 2010 US Criterium Championships and a stage win the same year in the Tour do Rio the high lights.

For 2011 he moved to Jelly Belly taking a stage in the Tour of Korea, placing fourth in Philadelphia and landing his usual raft of top US placings. Last season saw him move to Optum presented by Kelly Benefit Strategies; a move which agreed with him – taking stages in the Tours of Uruguay and Korea as well as road and criterium victories in Canada, the USA and Belgium. Despite a varied and heavy programme which didn’t hone in simply on criteriums, he won the National Criterium Championship and was an excellent fourth in the Elite Road race Championship against Pro Tour opposition. 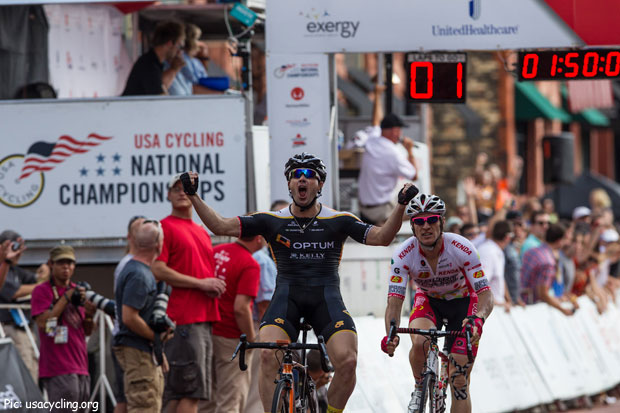 This season started in fine form with a stage win in the McLaine Pacific Classic before the long flight to Portugal. Where he won the GP Medlab and a stage in the Volta ao Alentejo before the team crossed the border to Spain where he took podium finishes in the Vuelta Ciclista a la Rioja and in Stage Three of the Vuelta Castilla y Leon. We spoke to Ken as he prepared to take some down time before the final preparation for California.

PEZ: Tell us about the Euro programme, Ken.
The team is US based but we like to race in Europe – although it can be difficult getting the rides because the team is Continental. But we have to remain at that level in order to ride a full US programme. Sometimes it’s tough to get the rides but you need them to be ready for California and Philly; you can’t be competitive against them if you haven’t raced against them beforehand. Portugal and Spain were our drawing boards for California – I’d have liked to come away with wins from Spain but it was good racing and fills the gap before the US season fully gets under way.

PEZ: Your Portuguese Campaign went well.
As well as my stage win we had Chad Haga in second spot on GC; we tried to isolate the Belgian guy who was leading, Jasper Stuyven but it wasn’t to be. But we raced aggressively – at the level in Portugal the racing isn’t controlled; it’s not like 1.1 and HC races where the Pro Tour teams take control. We were happy with Portugal it was a good introduction to Europe for us – made harder by the fact that we didn’t have any local knowledge. You can read the race bible all you want but it’s not the same as knowing the parcours.

PEZ: And you were good in Spain.
I had a good opportunity for the win in Rioja but didn’t quite have the legs. We started the lead out with three K to go but I had to start the sprint too far out at about 400 metres, I tried to hang on; but two guys got past me. 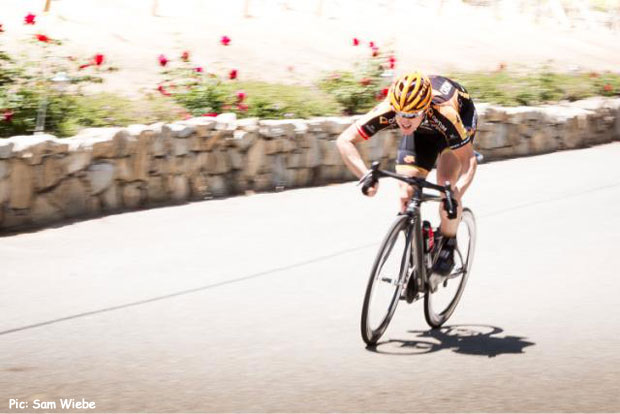 Sprint training with the team before the Tour of California

PEZ: How does racing in Spain compare to the US?
Spain isn’t as nervous, it’s a little more relaxed – until you go up hill, that is. Then it’s definitely not relaxed! The Spaniards excel as climbers and it seems as if you’re going the same speed up the climbs as you were on the flat.

PEZ: Did you ever consider a European career?
It appeals, but as a US sprinter, if you don’t go down the U23 National Team route to Europe then you have to be a criterium rider. Apart from Philly there are no one day races in the US and few what they’d call ‘sprinter stages’ in Europe. The Redlands is maybe the only domestic stage race with a pure sprinters’ criterium – the stage races tend to be three, four, five day with a time trial and rolling parcours. So if you’re a sprinter in the US, it’s the criteriums circuit. It’s a niche career and these last few years I’ve focussed on being competitive in those races. There hasn’t been the opportunity to race in Europe; but with Optum I’ve had that chance. I’d like to ride bigger races, I know at 31 I’m not a young lad, but I’m still improving.

PEZ: Your Belgian campaign went well last season, with a win and podiums.
The pro kermises in Belgium are hard; and at 150 to 180 K they’re over road race distances. There’s no control, it’s like the Wild West in those races – very hard to get results. And there are also the cross winds and cobbles to consider. If you’ve ridden the US crit circuit then you have the bike handling skills – it’s the endurance that you need. I’d love to race a full Euro programme with all the big races, one day.

PEZ: Your 2012 programme was pretty cosmo.
It was really good, I’m a good traveller and we rode a lot of races – I won stages in races on four different continents. And I won a stage in pretty much every UCI stage race I rode. The season was injury free, the team was good, the staff were good – and that’s very important. Optum is a Continental team but we’re I think we’re every bit as well organised as a Division Two team. The Europeans don’t know what to make of us – we’re ‘only’ Continental but there we are getting podium places against the big teams. But the rider and staff personalities are very important – if you’re on the Tour of Korea there aren’t many other folks speaking English; so you all have to get along with each other.

PEZ: Despite not having a crit focus for 2012, you won the US Championship.
Last year I told myself that I wasn’t going to put emphasis on the criteriums. I rode a heavy road programme – and prior to the crit champs the team was concerned I might be over-raced – but I seemed to thrive on it and was good on the day. The team gave me a text book lead out for the last 15 laps and we got the result. However, I have to say that I was lucky in 2012, there are so many things can go wrong in bike racing with crashes and injuries – but I had luck on my side.

PEZ: The 2012 season has to be your best ever?
Yes, I’ve spent the last couple of years working on my condition for winning in tough finishes – last season didn’t ‘just happen.’ It’s a great help that I have such good lead out guys at Optum; they can all change positions and roles depending on how they’re feeling – and that’s a big advantage. In 2012 we had a good spring and that gave me and the team confidence. Prior to me arriving, the team didn’t have a pure sprinter; so when I joined it gave the guys focus, motivation and confidence – we gained momentum after a good start and held on to it. 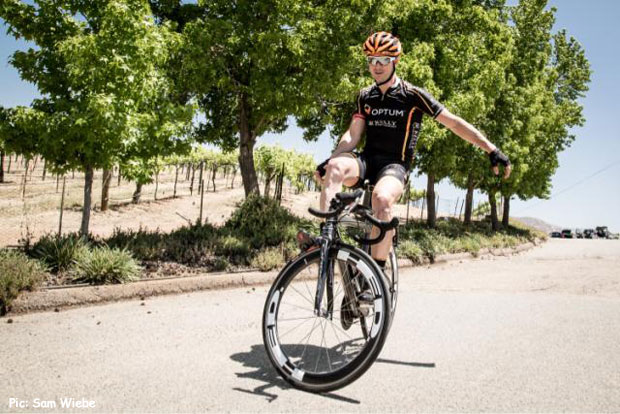 PEZ: Which win in 2012 gave you most satisfaction?
There were a few; but the team work at the Crit Nationals was a hi-lite. You always have a plan in bike racing, though most times you have to change it – but that day was an example of perfect execution of a plan. The National Road race was another great day; it was a hilly parcours but I got fourth behind Timmy Duggan and was sprinting for second spot. And there was a stage in the Tour of Elk Grove – that’s a UCI 2.1 – there was a crash at 4.5 kilometres to go and I was forced to unclip. I was off the back of the field but chased and got back on with 2.5 K to go – I had no team around me and only got back to the front with 500 metres to go.But the adrenalin took me to the win.

PEZ: Goals for 2013?
I’d like to win a stage in the Tour of California; I think I’m capable of that – especially now that there are a few more proper bunch finish stages. After that I’d like to do a good ride in the Road Nationals; I’ve been seventh and fourth the last two years – I think if I can make it to the death then I can win. Then of course Utah and Colorado are a big focus for late season. And there’s the Criterium Championship; I have the jersey to defend – there’s an obligation upon me to perform well and honour the jersey.

Ben King out of Amgen Tour of California