Whilst Dave Zabriskie, Robbie Hunter and Christian Vande Velde are retiring and there’s no room at the inn for Alex Rasmussen, Martijn Maaskant and Sébastien Rosseler; it’s not just the escape chute that’s been in action at Garmin. One of the talents being welcomed up the airstair of the American squad with a name for nurturing youngsters is US U23 TT champion Nathan Brown.

As well as making the top step of that U23 chrono podium his own, he was third in the Elite TT behind big hitters Tom Zirbel and Brent Bookwalter; second in the U23 Liege-Bastogne-Liege and US U23 road race champs as well as beating big names Phil Deignan, Christian Meier and Fran Mancebo to the GC win in the tough Tour de Beauce.

Brown first caught the eye with second in the US junior road race championships in 2006 and won the ‘Junior Tour de France’ – Canada’s Tour d’Abitibi in 2008. Switzerland’s Tour du Pays de Vaud followed in 2009 and in 2011 there was his first National U23 TT title and a win in the Tour of Louisiana. Last season saw him second in the U23 Pan Am TT and third in the National U23 TT and take an eye brow raising top ten in the tough GP Briek Schotte in Belgium.

This season’s results meant that the pro teams would come a knocking and when Brown answered the door to find Jonathan Vaughters there, he was more than happy to talk turkey. 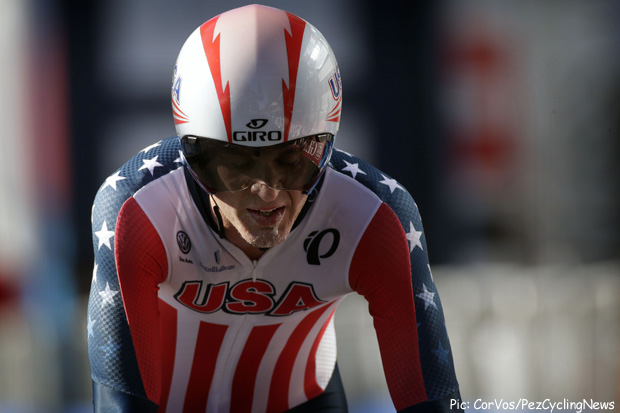 PEZ: Four years with Trek/Bontrager – it must be a wrench to leave, what will you miss most?
Not only is it the best development team in the world, it has become a family to me. I raced with some of these guys longer than the four years we were on Bontrager together. I am really going to miss racing with them. It’s sad to close this chapter of my life, but I am excited for the new one I am about to open. 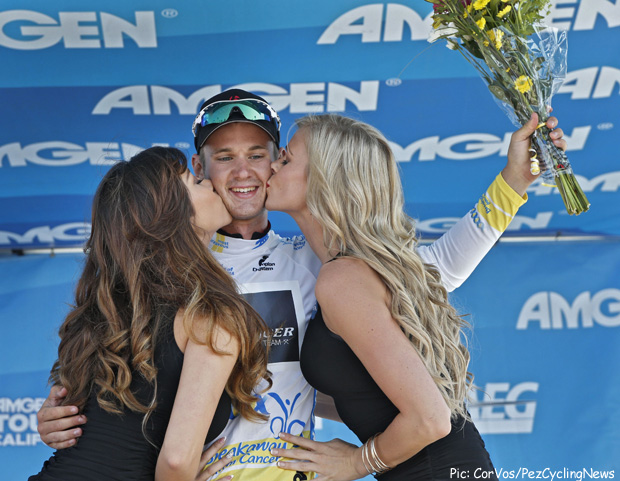 Good times with Bontrager on the podium in California this year.

PEZ: It must have been good to work with Axel Merckx?
Axel is great to work with; he is perfect for this team. When it comes to development teams the key is not to throw the guys right to the wolves and just say good luck. He knows how to develop you and build you into the lean mean fighting machine you need to be to make it to the next level. I have a great deal of respect for Axel.

PEZ: Isn’t a Cervelo going to feel strange after all those years on a Trek?
Yeah, after riding Trek for four years it’s going to feel odd to be on a different bike. It won’t be the first time riding a Cervelo though. I rode Cervelo when I was a junior on Hot Tubes Cycling Team. I really like the bike, and it’s an excellent fit. Both companies make exceptional bikes and it’s an honour to be able to ride them.

PEZ: Why Garmin; Radio Shack seems like a more obvious step?
After talking with JV I knew that Garmin would be the most beneficial for my development. Radio Shack is a great team, but they are starting to focus more on the Cobble Classics and that isn’t the type of rider I see myself becoming. I am super happy to stay with an American team.

PEZ: Have Garmin talked to yet about your role/programme?
I haven’t talked much about the program for next year with the team, but we have a training camp coming up next month, and I am sure I will find out more then.

PEZ: You must be looking forward to joining your ex-team mates like Joe Dombrowski and Ian Boswell on the World Tour?
I am really looking forward to joining all my old friends in the World Tour. Ian and Joe both live in Nice, France and I am considering moving there. I believe living, training, and hanging out with good friends while living in Europe will enhance my performance.

PEZ: Your first major result was Abitibi in 2008, the ‘junior Tour de France’ – tell us about that win, please.
2008 was my first year as a junior. I went into that season not knowing what to expect; but in the end it turned out to be a great year! I went to Abitibi with my trade team, Hot Tubes. I was in top form since it was right after the World Championships, and to my advantage I also had a great team behind me. I got in a break one day, and then won the TT and that was enough to seal the overall. Winning that first big race was a crazy feeling.

PEZ: Last season you were seventh in the GP Brieke Schotte – that’s one tough race . .
Cold, windy, and a little rain sums up this race; it was like a Pro Tour Circuit race. I got in a break with 15 or so guys and slowly but surely it got smaller and smaller due to the wind. By the end I was just cracked and happy to hold on to seventh. Racing in Belgium is some of the hardest racing in the world. Small roads, wind, and just crazy racers trying to prove themselves.

PEZ: Second in the U23 Liege Bastogne Liege – any ‘what ifs’?
I think second in Liege is my biggest and proudest moment in cycling. I owe all the credit to the team though. An early break got up the road and got over five minutes on the group. All the teams where looking at us to bring it back since we had one of the strongest teams. Tanner Putt and James Oram rode the front for over 80km and brought the break back to less than a minute before the main climb of the day.

I was able to jump in the right move and go to the line. I have no ‘what ifs’ what so ever. I put everything I had on the road that day and Anderson was just stronger. 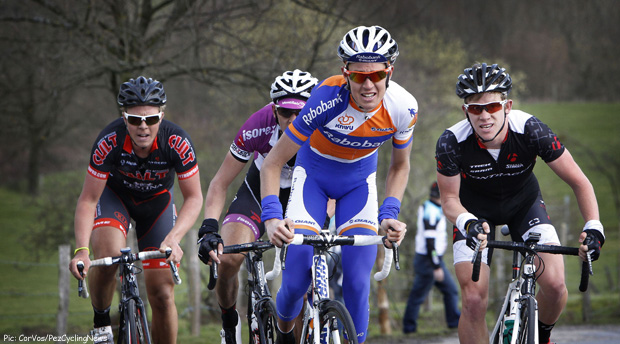 Michael Valgren (far left) answered everything that Nathan and the Bontrager and Rabobank Develoment teams threw at him to take Liege Espoirs for the second year running.

PEZ: You won Beauce from Deignan, Meier and Mancebo – not easy guys to beat . . .
I surprised myself a little at Beauce. I went into it with a three day stage race already under my legs. We went right from the U23 Nations Cup race to Beauce. We had one day off in between, so I really didn’t know how my legs were going to react; but I got stronger and stronger as the race went on, and going into the last day I found myself in second just a few seconds behind Mancebo.

I never thought I would be able to get away from Mancebo, but I wasn’t going to go down without a fight. United Health attacked and attacked Mancebo, weakening his team. After a few laps I took advantage of that and threw in an attack of my own. Right away I created a gap with Deignan and Meier and we just put our heads down and drove it. Mancebo and his team rode amazingly all week and I have to give them respect. With everything everyone threw at them the last two days they rode their hearts out and went all in. 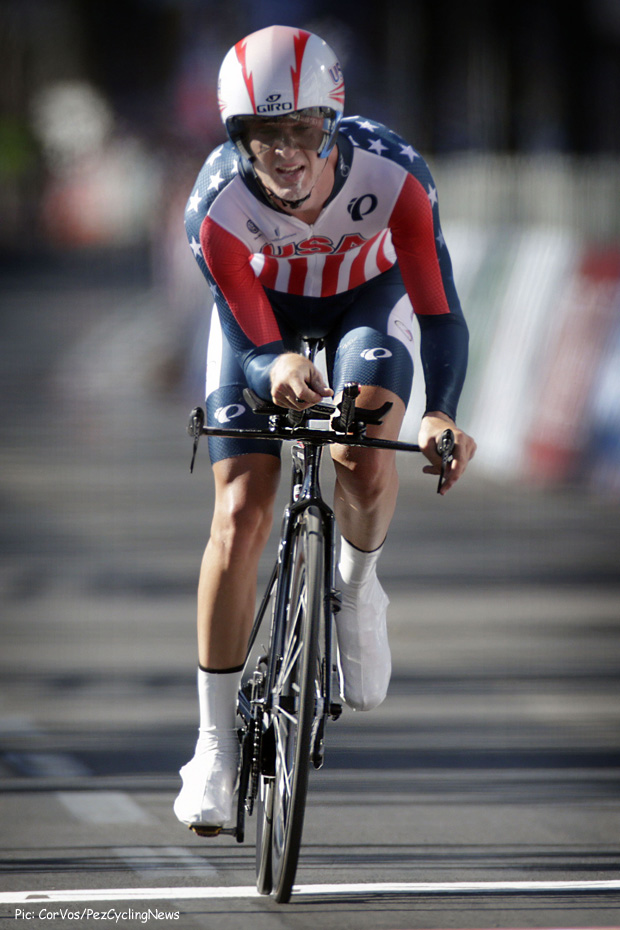 Representing the USA at the Worlds in September this year.

PEZ: You’re obviously very strong in the time trial, what are your other strengths?
I would say shorter stage races and hilly one day races are my strengths. I enjoy one day races, I love to just go out there, slug it out for one day, and be done with it.

PEZ: What do you feel you have to work on to improve?
I need to work on my climbing for sure. I was a great climber as a junior, but as time has progressed my climbing abilities have declined. I believe I could improve my climbing if I shed a few pounds – it’s crazy what a few pounds can do. My sprinting is lacking too – I might need to take some sprinting lessons from my little brother Jonny.

PEZ: What’s your favourite kind of race?
Hilly one day races – I like climbs between 3-10 minutes.

PEZ: Do you have a role model rider(s)?
Edvald Boasson Hagen (Sky & Norway) – I don’t know if I would call him my role model, but I really like him as a rider. I like his style of racing.

PEZ: Do you have a coach and what happens coaching-wise when you join Garmin?
My whole cycling career I have been coached by my dad (Dave Brown), but last year at the Worlds I made the transition and am now coached by Jim Miller. My dad is an amazing coach, and I owe a ton of my success to him; but we both knew it was time to turn our relationship around to just father-son.

Though my dad and Jim have very similar coaching styles it was easy to blow my dad’s workouts off because “ah, it’s just my dad he’ll get over it”, but now with Jim, if I try something like that he lights a fire under my butt and gets me out the door. My dad is relieved he no longer has to be the hard nose, now he can sit back, relax, and enjoy the races. I think when it comes to coaching, I’ve had the best. There are coaches at Garmin, but I can keep my own coach – which I will be doing – Jim knows exactly what I need and has me flying for the races I want to be good at.

PEZ: Has the team advised on what they’d like you to do over the winter and what’s the training camp schedule for you?
No – they will keep up with my training and once I know my race schedule I will know more of what I will be doing this winter. I haven’t heard much from the team yet; but I think there’s a camp in early November and then another one sometime later.

PEZ: What are the goals for 2014?
To learn. The first year I just want to get my feet wet and take in as much as I can. It’s a huge step and I am going to be getting my teeth knocked in a lot. There are a bunch of older guys on the team that I really look up to and can learn from. I will take it one race at a time.

PEZ: You’re from Memphis – have you been to Graceland and do you have Elvis on your iPod?
I lived in Memphis for over 10 years and I never went to Graceland but I do have some Elvis on my IPod though. The King still lives, that’s all I’m saying.

LAMPRE-MERIDA in the land of the rising sun