Orica-GreenEDGE pro Simon Clarke has established himself as a serious World Tour hitter over the last couple of years. A breakout Vuelta King of the Mountains title and stage win in 2012 was followed by a solid 2013 topped with a top ten in the brutal Florence Worlds in September. How has this season been and what’s in store for 2014?

We caught up with Simon in Hualien where he’d been invited to take part in the wild and wonderful Taiwan KOM Challenge, kicking things off with some questions about racing in this neck of the woods. 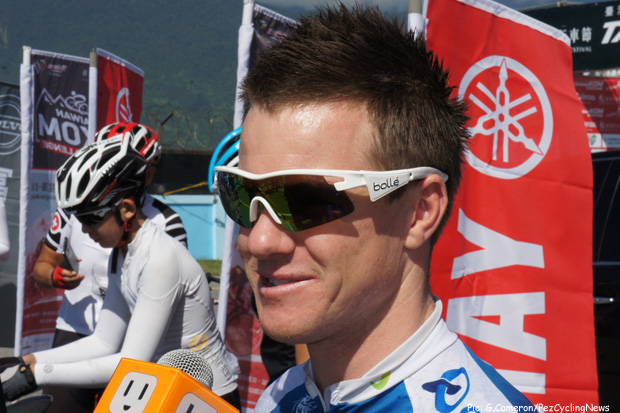 Pez: How have your early experiences of Taiwan been ahead of the race?
It’s been great. I didn’t have many expectations coming here as I didn’t know quite so much about Taiwan as I’ve never been here before. We’ve heard it’s amazingly scenic on the south coast and the drive down from Taipei and the ride today up into the gorge have both been really amazing.

Pez: Racing in Asia clearly suits you – you’ve scored previous wins in Japan and Singapore?
Yeah, I definitely don’t mind racing in Asia, hence why I’m here. Tomorrow is a little bit different to what I’ve won before in Asia so we’ll see what happens! 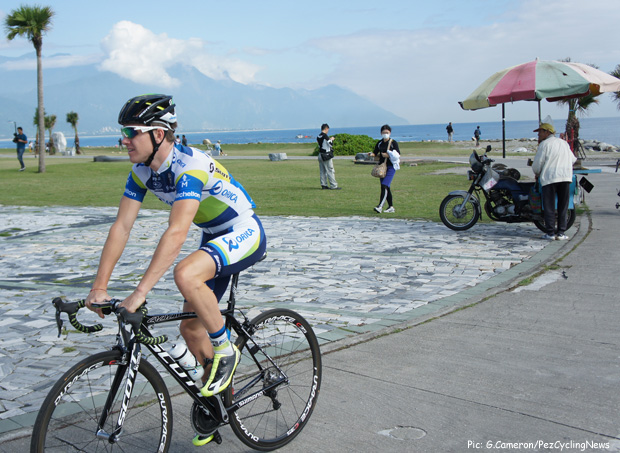 Pez: How tough is an event like this where for you as a European-based pro, you’ve stopped your season and will be starting this race as a one-off event?
That (stopping and starting) would be the biggest challenge for me. Normally I wouldn’t have too much trouble riding up a hill like this, but after a break and then to get going again is always a challenge.

Pez: You took part in a fans’ event this afternoon in Hualien … how are the supporters here compared to Europe?
It was good. I was happy to sign as many things as they want. It’s a pleasure. I think they really love it over here, even though maybe cycling isn’t the biggest sport in Asia. There’s lots of great fans out there. 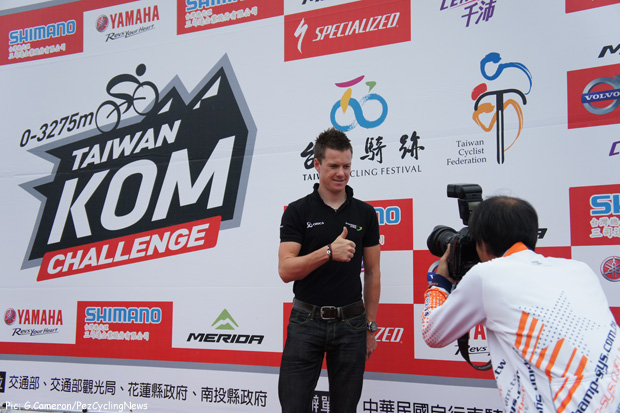 Pez: You’ve had that break-out win at the Vuelta in 2012 and a really solid year in 2013. How do they compare?
Yeah, I think they were two different years. The Vuelta last year was amazing. I think just to be getting results in Grand Tours … that’s not possible if you don’t have some of the best form. Whether I was winning by myself or winning in a team (i.e. as in the Tour’s TTT in 2013 – Ed.), the fact that we won as a team proved that all nine guys were really going strong.

I’m happy with both years, they were both different years. You can never replicate two identical years in a row … they were both successful for different reasons. I think that’s the beauty of the sport. It’s not just one World Cup or a World Championship. You can win various races and still call it a successful season. 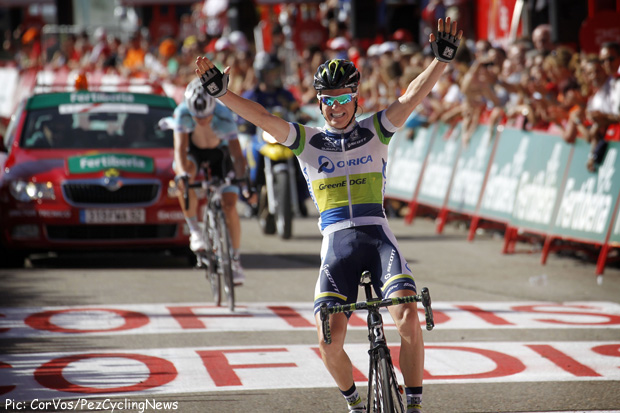 Simon taking his memorable win on Stage 4 of the 2012 Vuelta.

Pez: Do you think the last two years have won you more respect in the bunch?
Respect and space in the peloton isn’t really an issue, I don’t think, at the Pro Tour level. Everyone’s already respectful of each other. Everyone’s entitled to their space on the road and their race.

Pez: What was that Tour success like from the inside – stage wins, yellow jerseys?
It was unreal, it was like we couldn’t do a thing wrong! It was just an awesome experience and, for me, being my first Tour de France, it just set the bar pretty high. I constantly had guys, both my team-mates and other Aussies, reminding me that that first week we had this year in the Tour de France … there are many other guys who’ve done ten Tours de France and never been able to do what I was able to be a part of in the first week of my first Tour de France.

That really put it in perspective and I was able to enjoy it knowing that I hope it happens again but it could potentially not.

Pez: You then backed-up that Tour with the Vuelta – successive Grand Tours is a big step.
Yeah, I was in more of a working mode in the Vuelta, supporting Michael Matthews and we got him up for two stage wins. For me, it was all about building in preparation for the Worlds and fortunately that worked out alright.

Pez: What sort of feedback did you get from your top ten at the Worlds, in such miserable conditions?
I like to think of myself as a really consistent and reliable rider: no matter what the conditions, no matter what the situation, I will always be there and be reliable and that they can always count on me. The Worlds was a perfect example of that. Obviously you needed luck to not crash, but things managed to go my way. I could prove that I am as consistent as normal and that I can also be relied on to do a good result when there are other misfortunes on the team like what happened that day. 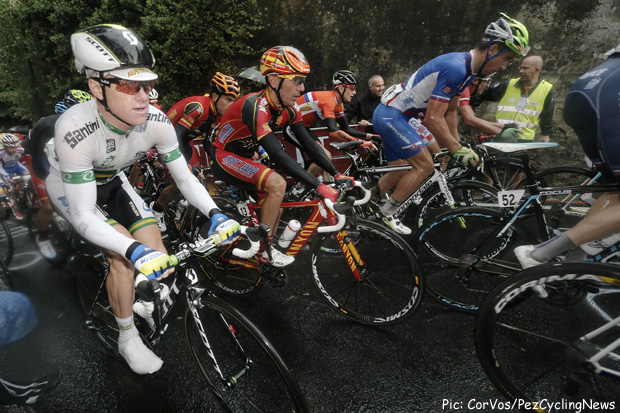 Simon in the ever dwindling front group at the Worlds where he would go on to finish 7th.

Pez: What’s next in your build-up for the 2014 season?
I have a training camp in Australia with Orica-GreenEDGE in two weeks. That’s when the real building phase starts, so a lot of December will be training up in the mountains in Melbourne.

Pez: What will your race programme for 2014 look like and what particular targets do you have in mind?
I think I will have a similar programme to this year. I don’t think that many things will change. I’m still learning to ride the Classics, it was only my second time doing them this year. I went much better in them than I did last year, and I hope to improve on that again next year. Hopefully, if not next year, in the next couple of years I can really be up there and try and get a few top tens.

Pez: Which Classics suit you best?
I don’t really have a preference, I like all of them. They’re all very different, they all have their own characteristics, but I like them all. At this stage in my career and in my position in the team, for my personal aspirations I just need to see where guys like Gerro (Simon Gerrans) are focussing and choose the opposite races for myself to try and perform.

I don’t have an issue with that. Gerro tends to like to pinpoint Amstel and Liege so, if that means I can be free to do what I want in Fleche, then I’m happy with that. He crashed this year in the Vuelta so I had a free run for the rest of the Vuelta and then the opportunity at the Worlds as well. Anything can happen. I’m pretty laid back, I just take it as it comes.

Pez: Stuart O’Grady has retired, in difficult circumstances. How do changes like that affect the team?
I think it’s a big loss for us as a team. He’s so knowledgable and inspirational. Not many people realise until you’re a team-mate with him … so many examples of insight that he’s given us. Even in the Tour de France this year, when we were riding in the yellow jersey – it was the first time for everyone except for him. He knows what to do, he’s been there. That counts for a lot.

You know, everything that happened with him earlier in his career … there’s not much we can do about that. In terms of his support for us, actually he’s much more valuable to us than maybe a rider with a cleaner history. I know that’s hard to get your head around, but he’s just got an incredible amount of experience that is a huge factor in helping you win bike races.

Thanks to Simon for his time during a very busy few days in Taiwan. You can follow him on Twitter @SimoClarke

Toolbox: The Long Look Back

Lotto Belisol: IJsboerke back in the peloton!