One of the most interesting projects to see the light of day in 2013 was the Synergy Baku Continental team from Azerbaijan. An International team in every sense of the word their main man behind the scenes is Irishman David McQuaid who took some time out to talk with Pez about his project, their impressive debut season and their goals of reaching Pro Continental status in 2015 and getting the maximum number of Azeri riders qualified for the 2016 Olympics. 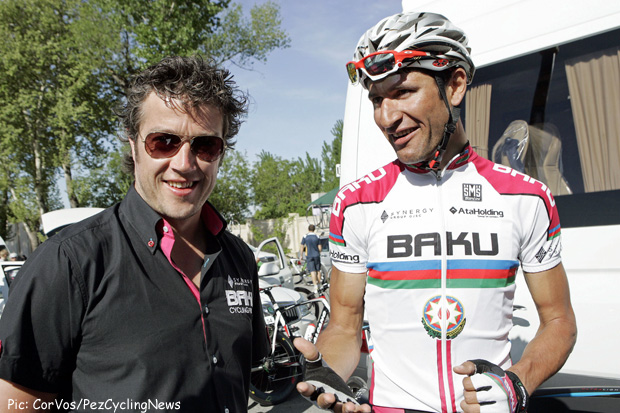 PEZ: You used to race and then were involved in race promotion, can you tell us a little about your background, please ?
Yes true, I raced all the way up through the ranks and hung up my wheels post Espoir level. I had some success, enjoyed it, thats the main thing. After I stopped, I also finished a University degree in Law, so I was faced with get a job or go travelling. I chose the latter. I spent almost 3 years in Oceania and Asia. During my time in New Zealand, I got the bug for organising and I organised a Criterium. Pretty soon after that, coinciding with my arrival back to Ireland, I started working with Brian Venner, at VTV as it was then, helping them as a cycling consultant so to speak. Through VTV, I got introduced to events like Langkawi. At Langkawi I’ve worked on 12 editions, first with TV and in the later years as Finish Manager. That is a role that I ended up doing on other Tours like Tour of Ireland. Finally, with Brian Venner and crew, I worked on 4 editions of the Tour de France, from the media side. During those years I made a lot of media contacts that in a situation like now, as General Manager of a team, can be quite useful.

PEZ: Ireland and Azerbaijan – unusual bed fellows, how did the connection come about ?
A chance meeting on the side of the road in Valkenberg during the World Championships. We started talking alongside the barriers waiting for various groups to go by and when I discovered they were from Azerbaijan, I started talking about the Tour there and asking questions. In the end we exchanged business cards, but my business card was from Ireland where I have a cycling import/wholesale business. The Azerbaijan Federation guys immediately recognised the brands listed on my card and asked would I help them. I still didn’t know they were planning a UCI team, this only became apparent in the following weeks over email exchange.

PEZ: Baku is the capital city, what’s it like ?
Baku really is a great City. And to boot Azerbaijan really is a beautiful lush Country. My first impressions of Baku were that it is a mix of Dubai and Istanbul. The people, the food, the street games and the culture would remind me a bit of Istanbul but the new super huge buildings and the infrastructure would remind me a bit of Dubai etc. 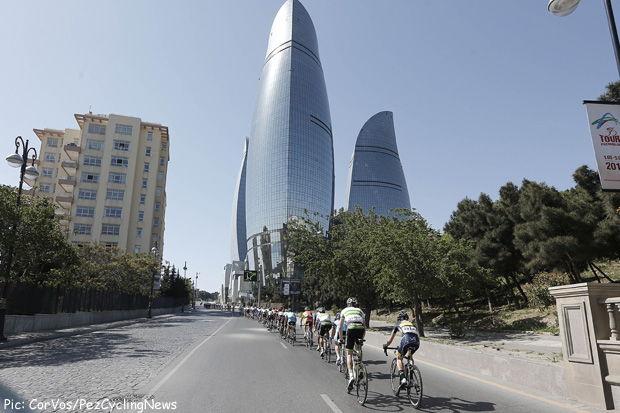 The peloton races through the streets of Baku during the 5th stage of the Tour of Azerbaijan.

Pez: ‘Synergy’ is ?
Synergy is a private commercial group, very aligned to the Azerbaijan Cycling Federation. Synergy Group is quite large, they are involved in business through many sectors, whether it be banking, hotels or construction.

Pez: Azerbaijan is oil rich, I believe – similar to Kazakhstan ? is there an echo of Astana to the team ?
A short distance out of Baku City and you will see the oil rigs and the oil pumps. Yes true, Azerbaijan is quite prosperous with oil and gas. Like Kazakhstan, it too borders the Caspian sea. On some days you can even smell the oil in the air. During a training Camp some of our riders complained that they were coming home with a thin layer of oil on their faces..

As regards similarities between Astana and BCP, there are none if you exclude region. Astana very much created everything they have done from the top down, we are starting from the bottom up. We are creating foundations, a good structure for Azeri development. I’m assisting the Federation very much, with equipment and technology. Furthermore next week I will be in Baku introducing a new National Coach for the Federation from France. We are aspiring to be a very good, World renowned Professional Continental team. Perhaps in the future once we achieve that status we will begin another Continental team. It has to always remain a core structure where Azeri cyclists can prosper and flourish. Shooting straight to World Tour application would go against that strategy.

Pez: How much interest is there in Cycling in the country ?
The big sports in Azerbaijan are wrestling, judo and boxing. For Cycling it is growing. Tour d’Azerbaijan is probably assisting that as much as Baku Cycling project. The race is largely advertised in the Country in the months running up to it. It is 2.1 next time around. Our BCP team probably helped the promotion of Azeri cycling by putting in such a strong performance all round at last year’s Tour.

Pez: Does the fact that it’s a Muslim country affect your modus operandi in running the team at all ?
No, not at all.

Pez: Your squad is very cosmopolitan – is that deliberate or chance ?
It is nice to mix things up, cultures, languages and personalities. It creates some difficulties sure, but the positives far outweigh the negatives. We have a great team spirit in our team and it is something I will always strive to maintain down the line.

Pez:I believe that the team’s goal is to have Azeri riders ready for Rio in 2016, how is that progressing ?
You are correct. The expectations on us are one rider, but we are aiming for three. In terms of progress, we have set the structure, the foundations and worked with the Azeri riders over the past year. We are in an advantageous position, as we have had this luxury, because the Olympic qualification period has not started yet. I’m regularly in touch with the road department of the UCI, asking questions about it. It’s a bit of a grey area as to how it will work, but once the qualification window opens, we will be ready.

Pez: What were the team race stats for 2013 ?
I don’t know how many race days we did, its something like 88 on the Asia Tour and 55 on the Europe Tour. No rider did more than 75 race days, most averaging about 50. What I do know accurately is that we won 14 UCI races, and visited the podium 39 times. Rico Rogers was very unlucky in 2013, whilst he bagged a few wins, he was Mr second place.

Pez: What was your hi-lite ?
It’s hard to say really. Pozdnyakov’s victory on Stage One of Tour of Taiwan was nice, as it was our first victory as a team. Schweizer’s impressive victory at Tour d’Azerbaijan, winning the first stage was quite an emotional relief as it was right under the eyes of all the people I’m working for. Then we have to look at Samir’s wins in both the National’s and Jelajah Malaysia, because he is Azeri and winning. Finally on a personal level, just seeing the guys on the start line of Langkawi, after 8-10 weeks of hard work setting up the team in that time frame was a nice feeling for me. 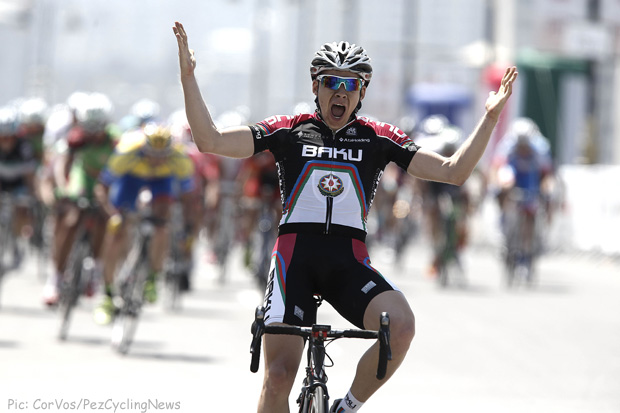 Christophe Schweizer taking his impressive victory in Stage 1 at the Tour d’Azerbaijan.

Pez: You’ve signed Matt Brammeier for 2014 – that’s a good signing.
Yes, I had been speaking to Matt for a while, when the demise of Champion Systems became apparent. Matt’s a friend, as well as a fellow countryman, so I offered to hold a spot for him up until a certain date to allow him to chase one or two leads he had to get back into a World Tour team, one of which was Saxo. As a fellow countryman I wanted to see him in a World Tour team again, and with the amount of riders on the market looking for positions, I wasn’t afraid that I couldn’t get a high quality rider to fill that last spot on the team if Matt did sign for Saxo.

But now he is with us, and will be a terrific rider for the team. Remember, we wish to be Professional Continental in a years time so we are building for that now. Riders like Brammeier, Walker and Eibegger are part of that strategy. 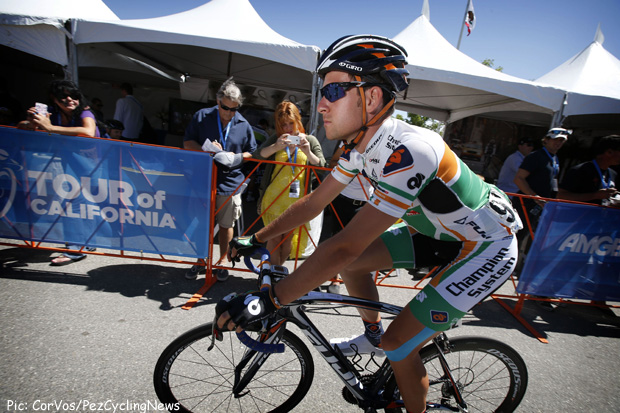 Pez: What are the plans for 2014 ?
We are starting our season a month earlier and will finish our season a month later, so there are many races. I would like to see from the guys a consistent year, as we had last year, punching out a couple of wins a month. However that said, I want the team to bag a few yellow jerseys. In 2013, finally we got that monkey off our back in September when Kirill won Tour of China. In 2014 we have much the same race programme, but we have added a lot more races in Europe, hard races. I would like the team to be able to raise their game and perform in this arena. This is why we have strengthened our squad in the fashion that we have. We have good consistent stage racers, good diesel engine workers like Brammeier and we have worked on developing a sprint train.

Pez: Do you still have Pro Continental ambitions ?
Yes this is still very much our target. I will get the guys on the way with the season and then from mid Summer start focusing in on this more seriously. We want to apply for this ranking for 2015.

Pez: Are you going to win the Tour of Azerbaijan in 2014 ?
That is something I would like to see happen yes! But it is a question I can’t answer. It is definitely a target for sure and our March/April race programme is dedicated to having our strongest team of 6 on the start line there. It’s 2.1 now. I haven’t heard what teams will attend just yet, perhaps some World Tour now but one thing I can tell you is that we will give it our best shot.