Rider Interview: The Tour de France build-up is well underway and Ed Hood managed to grab American rider Matthew Busche of Trek Factory Racing for some words before his first ‘Grand Boucle’. Busche has been on a Vuelta winning team in the past, will that be enough preparation for the Tour?

He has two Vueltas under his belt; one as a member of the winner’s team – Chris Horner in 2013.

But 2014 will be his first Tour de France; and despite the 1,001 things he has to do before the Yorkshire départ this coming Saturday, Trek’s 29 year-old Matthew Busche found time to talk to PEZ about what is the pinnacle of any professional rider’s season.

Winning the US Pro Championship title in 2011 is just one testimony to the rapid progress Busche has made since taking up the sport of cycling.

A former college runner, he cycled as cross training but it was only in 2008 when he started to concentrate on two wheel competitions.

At the beginning of the 2009 season, he was riding as an amateur in the US when the Kelly Benefits pro team snapped him up.

He rode a mere four races for Kelly before Johan Bruyneel signed him for Team RadioShack on the strength of a fifth place finish in the US PRO champs.

Busche’s first year in the Euro pro ranks was a whirlwind tour capped by a podium finish at the 2010 Tour of Denmark. 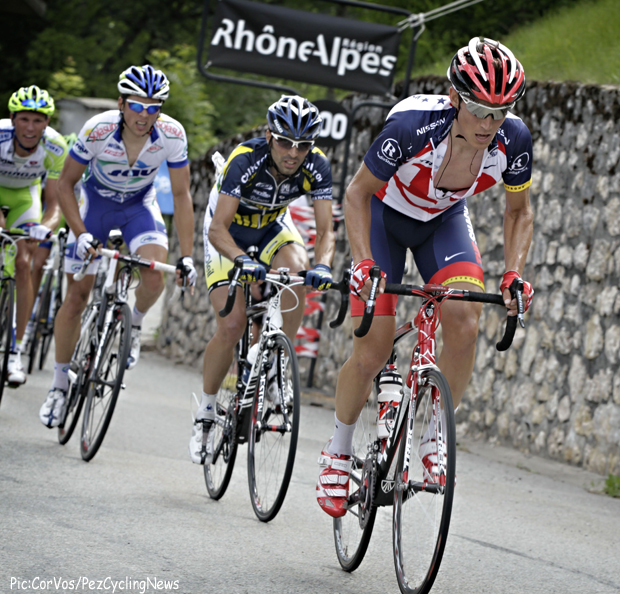 On the attack: Dauphiné ’11

In his second year with The Shack he produced strong results; but the strongest by far was the one he achieved in Greenville, South Carolina in the US PRO championships.

That 2011 season finished with a ride in the Vuelta.

Season 2012 saw him 14th on GC in the Tour of California, second in Utah and eighth in Colorado.

Last season his progression continued, taking fourth in the hard fought early season one day GP Citta di Camaiore in Italy, moving up to sixth in California, crack the top 20 in the Dauphine, take a fine seventh in the Tour of Austria and then finish fifth in Utah before a ride in the Vuelta in support of Horner’s famous victory.

This season has started a little more quietly for Busche; he rode the Tour of the Mediterranean and Paris-Nice before cracking the top 20 in the Criterium International. 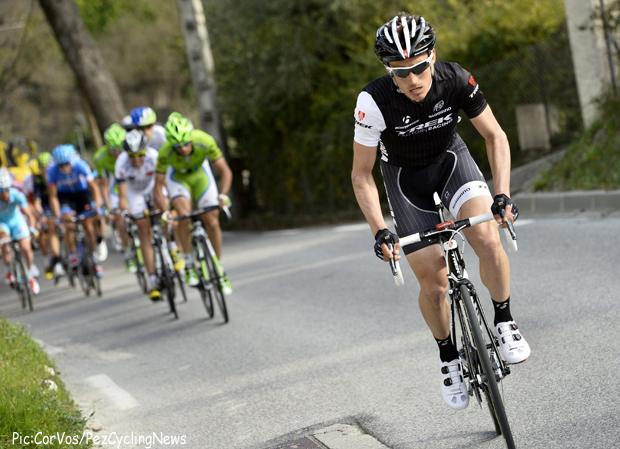 On the attack again in Paris-Nice’14 Stage 8

Pais Vasco was the prelude to the Tour of California where he finished 13th before taking 10th in the US Elite Road race Championship behind the surprising Eric Marcotte.

The Tour de Suisse then ended in a DNS in the time trial as a result of suffering from tendonitis – so that was our first question:

PEZ: You had to quit the Tour de Suisse with tendonitis Matthew; are you over that?
Matthew Busche: I’m good; I went straight from the race to one of the team doctor’s clinic in Basel.

He figured out what was going on and despite the setback it hasn’t derailed my plans.

We don’t really know what caused it but the treatment was designed to prevent any repetition.

PEZ: How long have you known that you would be riding the Tour?
Matthew: I knew I was on the list but nothing was certain ’til I saw what everyone else did on Twitter.

I’m a little nervous about my fitness given how I exited the Tour de Suisse but I think I’m where I’d like to be.

PEZ: Have you had a chance to do any recce work?
Matthew: No, were going to go see the Pyrenean stages because they’re not so far from where I live in Girona but the tendonitis put paid to that.

I’ll just have to fly by the seat of my pants but I’ll be talking to team mates who know the roads about what’s coming up.

PEZ: What’s your role?
Matthew: To look after Frank Schleck and Haimar Zubeldia, our GC guys.

There’ll be opportunities for me too; as long as the GC guys are taken care of – but the team always comes first. 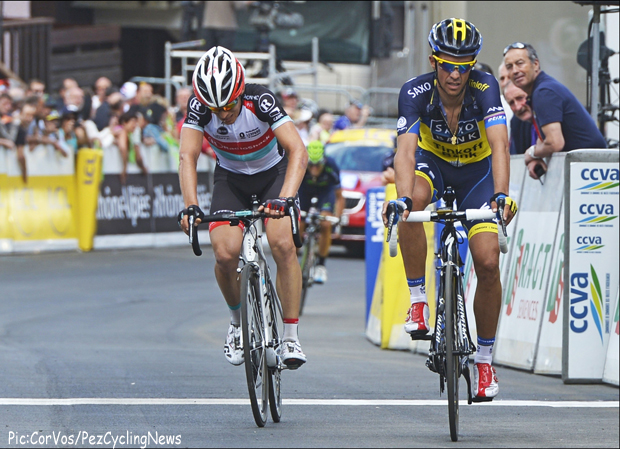 Mixing it with Alberto Contador in the Dauphiné ’13

PEZ: Some riders have expressed concern about the early English stages.
Matthew: I’ve not heard or seen much information but I know they’re up and down roads – tough parcours.

And the mere fact that it’s the Tour amplifies everything – the stress, the speed, the risks . . .

PEZ: Trek hasn’t had the best of luck, this season.
Matthew: No but we’re all in good health and good spirits, now.

We had crashes with Frank and Fabian and other bad luck; but on the flip side it allowed the young guys on the team to come forward and show what they could do – and that’s been very encouraging. 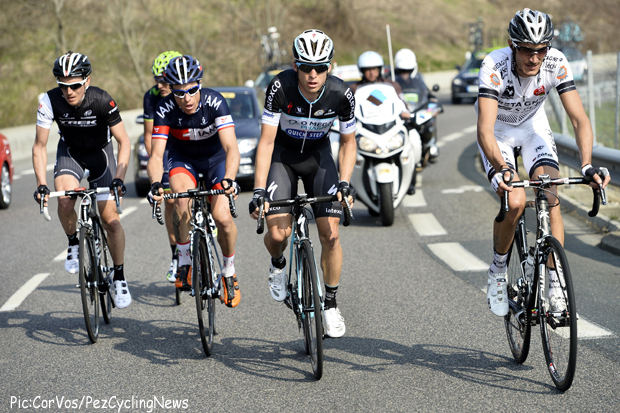 PEZ: And Girona is still home?
Matthew: Yeah, it’s my fifth year here and it definitely feels like home, now.

PEZ: Your start to the season has maybe been a bit slower, this year?
Matthew: A little bit but I’ve taken a different route to get where I am – having started slow.

California where I placed 13th was a bit of a disappointment, I had a bad day on the wrong day and shot myself in the foot.

The heat was a factor but really I’m not sure what happened – just ‘one of those days.’

However, I’m happy where I am at this point – all cyclists are excited about the opportunity to ride the Tour de France and I’m no exception.

Eric Marcotte, who won, positioned himself in the early break and made it to the finish circuits with the leaders – he put himself in a good position.

Once you’re on the finish circuits it’s hard to get rid of guys.

I rode the best race I could – but his was better. 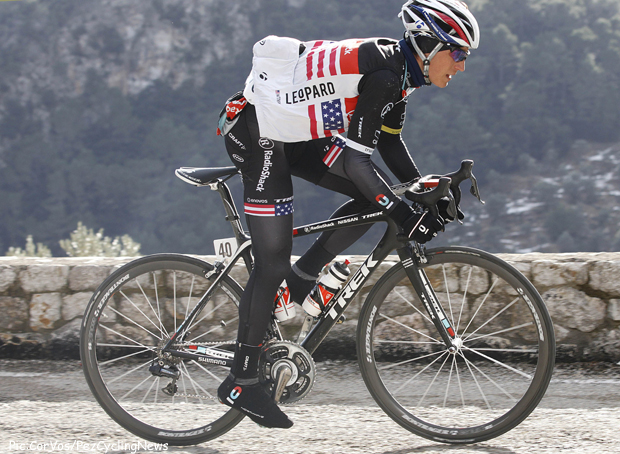 PEZ: You’re now the only US guy left at Trek . . . .
Matthew: To tell you the truth, it doesn’t seem significant, I’m a member of the team and the team language is English so it’s not something I think about.

PEZ: It must have been special to win the Vuelta with Chris Horner, last year?
Matthew: Being part of that is one of the hi-lites of my career – it was a tumultuous race for me.

I crashed, then I was sick before I barely survived the time trial – but then I came back from those setbacks to help Chris and the team to win.

When all’s said and done it was so much fun to see Chris in the red leader’s jersey at the end of that race.

PEZ: What are your expectations of the Tour?
Matthew: I have no idea what to expect.

I’ve ridden two Vueltas but everyone says that the Tour is a level above every other race.

Not just in athletic terms but in terms of grandeur, surroundings and the fervour of the fans.

If I can survive the overwhelming atmosphere and contribute to the team’s GC riding – as well as try and take up any opportunities for myself then I’ll be happy. 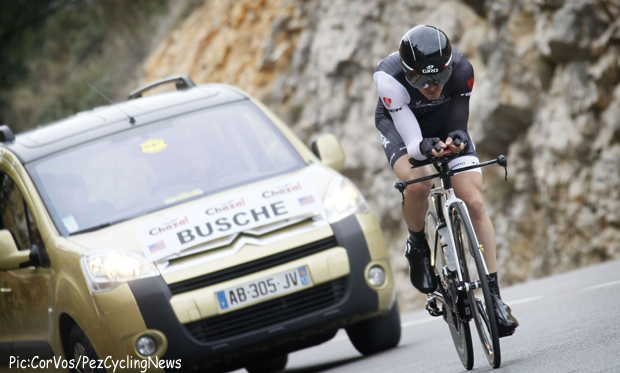 A first Tour de France can be a make or break for any rider, but Matthew Busche has come through the ranks steadily growing in stature and experience. Good luck Matthew.

Lotto Belisol: The route of the Tour de France 2014