The biggest race on the US calendar at the weekend was the Air Force Association Cycling Classic, Clarendon Cup in Arlington, Virginia. The race is this longest criterium on the US calendar at 100 kilometres and Saturday was the 16th edition of an event which has seen the likes of Gent-Wevelgem winner, Lars Michaelsen and ‘crit kings’ Rahsaan Bahati and Ivan Dominguez stand atop the podium. The UnitedHealthcare ‘Blue Train’ took their fourth straight win in the event, with 28 year-old Slovenian strong man Aldo Ino Ilesic lapping the field as part of an eight man break to take his first win of the year.

Aldo has been a regular on PEZ through the years and we caught up with him at home in Slovenia as he took a little well earned down time before flying off to China to ride the Qinghai Lakes.

The tall man from Ptuj first caught the eye in 2003 with a stage win in the Tour de Slovenia. In 2004 he turned pro with well respected Slovenian team Perutnina Ptuj and took a stage in the super fast Olympia Tour of Holland. The following season, a stage win in the Paths of King Nikola stage race in Croatia was the high light. The Giro delle Regione gave him a stage win in 2006; but it was 2008 when he really found his feet – with eight wins, from Croatia to Charlotte, North Carolina in the colours of Slovenian squad, Slava. 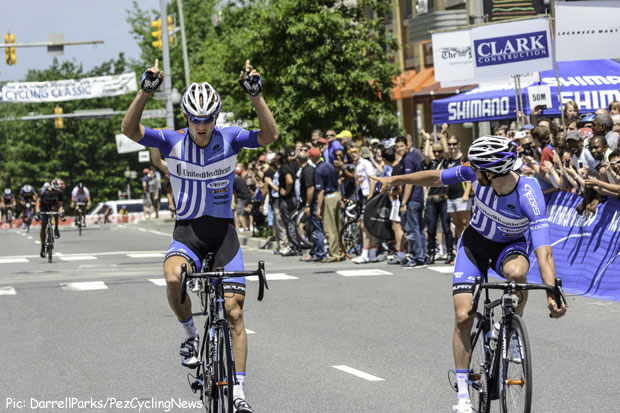 For 2009 he signed with Team Type 1 – where he stayed until the team changed direction at the end of 2012 – taking two big criterium wins in the US as well as a host of podium places. The following year, slimmed down to get over the hills, he was a real force on the UCI Tours with three stage wins in the Tour du Maroc, one in the Tour of Mexico and two in the Tour do Rio.

In 2011 TT1 went Pro Continental and the level of races was higher – despite this, Ilesic had a solid season, kicked off with two top ten placings in the early season Etoile des Beseges in France. Last year saw him drop into the role he was perhaps designed for all along – lead out man. Along the way he took three major wins for himself, was second in ‘Philly’ and was instrumental in many of TT1’s wins on the UCI circuit all over the world.

PEZ: Congratulations on Clarendon, Aldo – what was the UHC game plan for the day?
I didn’t plan to go for the win but when the chance came, I took it! The plan was for us to keep it together for a mass sprint but as the race went on it was obvious a break was going to go. We agreed that if a break did go then we had to have two in it; one to drive and one to sprint. I got away in a break of eight in a break with Danny Summerhill and that proved to be the winning move.

PEZ: And you lapped the field?
Yeah, with about 20 laps to go. Once the junction was made that meant I could get full support from the team; Jake Keough was actually first across the line at the end with me just behind but because I was a lap up and best of the break, I was the winner. 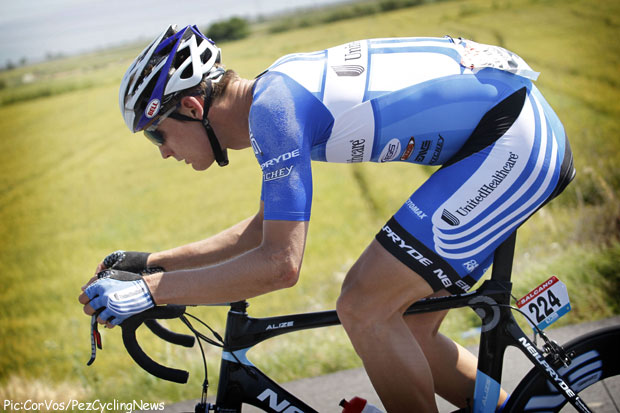 PEZ: Your team mate Danny Summerhill was good for you in the break, I believe.
He was amazing, really strong; he did the job for me; we didn’t know if we’d manage to get the lap – but if we did I’d have to save my legs for the sprint. It wasn’t actually planned for me to be riding US crits but because we didn’t ride in Austria or Slovenia, I was there. I’m part of the UnitedHealthcare road squad but have ridden crits for years, so it was a good experience. 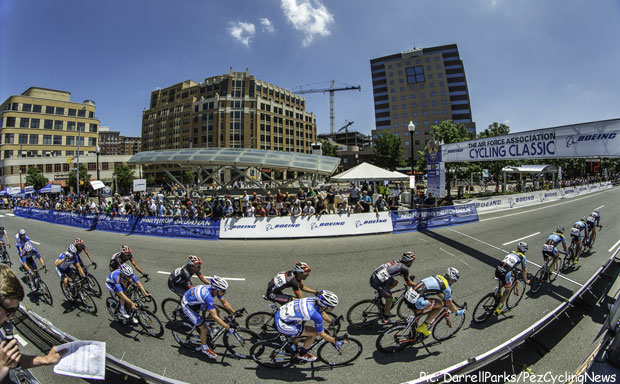 PEZ: At 100 K it’s a long criterium.
It’s the longest on the circuit, 100 laps of a one kilometre circuit with five turns on each lap – so that’s 500 corners! It’s not a circuit you can just go out and ride, I’ve ridden it three times – the first time I was DNF because I didn’t understand that you have to go through the corners at full speed, if you don’t, you burn up so much energy accelerating out of the turns that you’re soon wasted. The second time I finished but was empty in the final – this time I got it just right!

But I have to tell you that my equipment made a big difference this time round; I’m a big guy and need a strong, reliable bike and tyres underneath me – the NeilPryde gives me confidence in the turns and the Maxxis rubber is fantastic on a circuit like that, you know you can trust it.

PEZ: What’s the UHC ‘crit secret?’
It looks easy right now, but it’s the result of four or five years work – it didn’t just come about first time round. Everyone knows their job, there are no questions about; ‘maybe I could do this or do that,’ we all have a role to perform and that’s what we do. That crit squad is just crazy good – and they’re fun to be around. The team’s goal is to get the road squad working as well as the crit team – transfer those team skills across.

PEZ: And Robert Forster is back.
Yeah, he’s back from injury; he was out all spring and we missed him – he’s so experienced, we missed him. With the riders we have we have great hardware – but he provides the software to drive it.

PEZ: This is your sixth season on the US crit scene; what’s changed?
That’s a difficult question; but when you’re riding on the best team it seems easier, now! The maximum six man team restriction was a big change; but I think there’s still a lot of potential for criterium racing to grow – United States Cycling and the organisers could work more closely, I think. Young US guys tend to ‘pass through’ crits on the way to be roadmen – it would be good if they remained within the scene.

PEZ: You had three top 20’s in the Etoile de Besseges but your palmares have been quiet ‘til Clarendon.
This season isn’t about results for me, it’s about being part of the lead out train and getting that just right for Jake Keough – he’s our main sprinter. And Robert Forster was to have been a key part of that – but he was out for the spring. At Besseges I was just doing what I could, our sprinters were at San Luis and Langkawi. 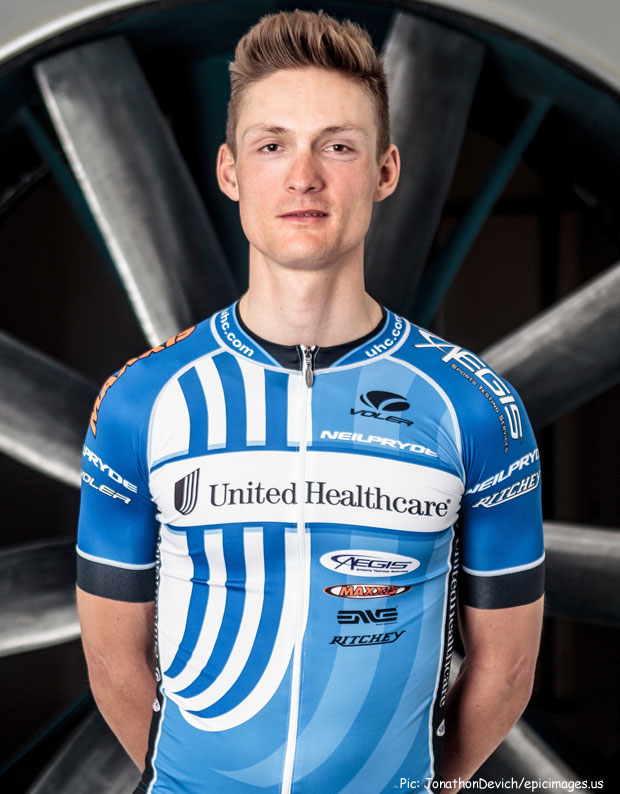 PEZ: You’re looking awful skinny.
A lot of people have been saying that to me – I think you’re right but it just comes with the job. I’m three or four kilos lighter and that means I can get over the climbs better and be there at the end.

Long two man breakaways like here in the Tour of Turkey this year are certainly one way to lose weight…..

PEZ: Are there races for you to ride at home?
There are only a few races at our level in Slovenia – the Tour of Slovenia is coming up but we’re not riding it. We have a team in Beauce and with injuries we can’t field a squad for Slovenia. My next start is the Qinghai Lakes in China; it’ll be a hard race – I’ve heard that Lampre and NetApp will be there. The focus of that race is changing from climbers to sprinters; when I first rode it four or five years ago, the climbing was crazy. But last year 11 of the 13 stages ended in a sprint; there’s always a group of at least 50 or 60 guys contests the finish.

PEZ: What are the goals for the rest of 2013?
The main thing is to get our sprint train dialled in and get stage wins. We’ve been trying hard but it’s time for us all to get on the same page and for me to do what I get paid for.

PEZ: Will you cut yourself any slack on your R & R time?
This week I want to do stuff totally unrelated to bikes! I have no specific plans – but see friends, have some barbecues, do some sight seeing . . . Then it’ll be back on the bike and solid training for Qinghai.