Apart from the fresh mussels, lovely wines and good company, the other nice thing about the Vacansoleil Mussel Party is that you get informal access to the riders.

There’s an easy, laid back vibe around the team, albeit I remember ex-British champion, Hamish Haynes telling me once; ‘if that Vacansoleil bus rolls up at the start of race, you know it’s going to be one hard day!’

The team is the mixture of youth and experience. A cliché – but with 19 year-old Danny Van Poppel and 35 year-old Juan Antonio Flecha, it’s no exaggeration. 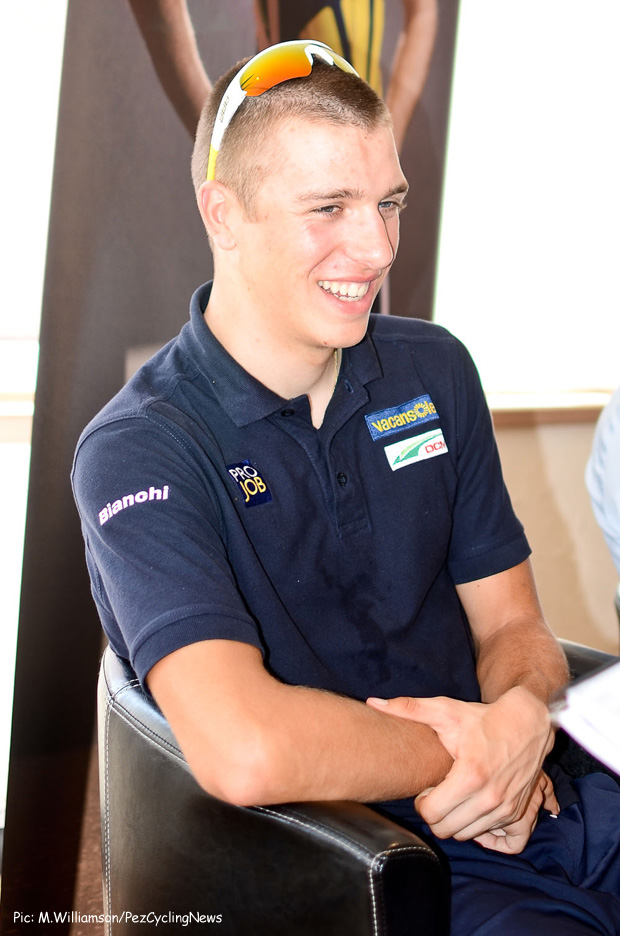 Van Poppel is the youngest rider to start the Tour since the Second World War.

He’s been racing since he was eight years-old and has a raft of excellent junior performances all over Europe behind him as a road and cyclo-cross rider.

Last year he rode for Rabobank Continental with stage wins in the Thuringen Rundfahrt and Vuelta Ciclista Leon on the board.

This year he joined his dad – who’s DS at Vacansoleil – and has made a highly promising start to his pro career with fifth in the Ronde van Drenthe, third in the Handzame Classic, second in the Tour of Luxembourg prologue and third on Stage One of Le Tour. 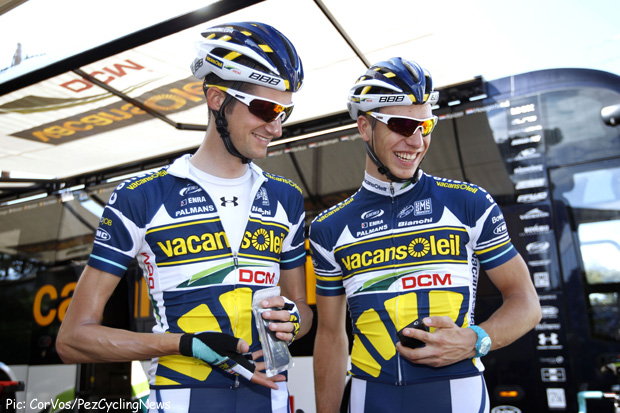 We started off by asking what the biggest race he’d ridden prior to the Le Tour was:

Danny van Poppel: I rode the U23 Worlds but as far as stage races, probably the Tour de l’Avenir.

PEZ: What are your first impressions of the Tour?

Crazy! Crazy fast, crazy people beside the road and a crazy amount of media – there are cameras everywhere. I’ve been getting good attention from the media back home, there are two shows each day on TV about the Tour and I’ve featured in those quite a bit.

Stage one where I was third and took the white jersey – that was a big deal and grabbed me a lot of attention back home. But the thing is that on the Tour you’re in a bubble so you don’t know really what’s happening in the ‘real world.’ 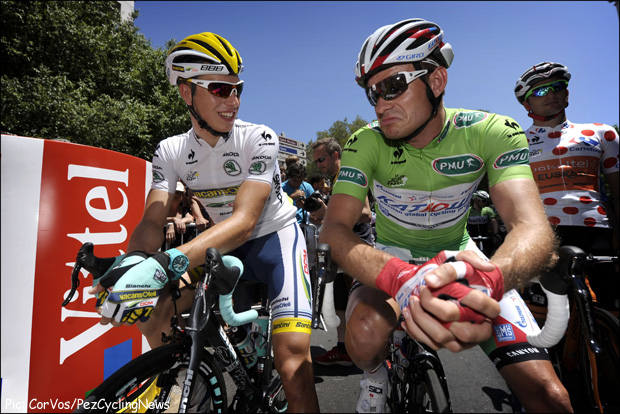 The Ventoux stage was very hard, at 240 K it’s the longest race I’ve ever ridden. And it was full gas from the gun and kept like that for the whole stage – very hard. But I didn’t ride the climb in the autobus – I rode up before that.

PEZ: What’s the toughest thing for you ?

The mountain climbs; I’m a sprinter so it’s not so easy for me in the hills.

PEZ: What has surprised you?

The number of people at the roadside, especially on the Ventoux, it’s unbelievable.

PEZ: How has the heat affected you?

It was really hot in Corsica and I found that difficult for those first three days – but since we reached the mainland, it’s not been so bad, although some days the humidity has been very high.

PEZ: Is it difficult working with your dad?

Sometimes, but he’s not first DS so usually we get on OK.

PEZ: What are you most looking forward to after the race?

Riding the post-Tour criteriums back in The Netherlands – and a big plate of frites!

Van Poppel didn’t start the stage after the rest day, the team happy that two weeks was enough of an introduction to the savage world of the Grand Tours for a 19 year-old.

Now, let’s go to the other end of the spectrum, the man who’s been pro since 2000 with Spanish minnows, Relax. 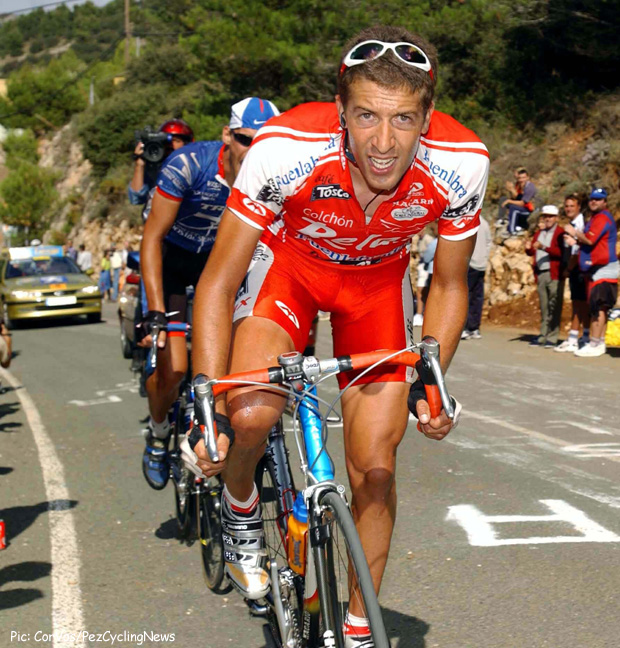 A young Juan Antonia Flecha back in 2001 with Relax.

In the two years he was with the team, he scored victories in lower level Spanish and Portuguese races – those got the attention of Banesto where he spent two years. He rode the Vuelta in 2002 and won a stage in the 2003 Tour – his first ride in the race.

The team for 2004 was Fassa Bortolo with wins that year in the Zurich Classic and Lazio. The following year saw the first of a long list of top placings in the Northern Classics, second in Gent-Wevelgem and third in Paris-Roubaix.

For 2006, he joined Rabobank and in 2007 was second in both Het Nieuwsblad and Paris-Roubaix. He was third in Flanders in 2008 and won the Franco Belge, with another podium in Het Nieuwsblad in 2009 – third, this time.

He joined a fledgling Sky for 2010 and gave them their best result of the year with a win in Het Nieuwsblad, not to mention third in Paris-Roubaix. In 2011 he was second in Het Nieuwsblad and third again, last year.

This year he joined Vacansoleil and took fifth in Gent-Wevelgem and eighth in Paris-Roubaix. We opened by asking him for memories of that first Tour ride in 2003.

Juan Antonio Flecha: Perhaps most of all riding on to the Champs Elysees in Paris at the finish having realised that le Tour is what cycling is really all about. I mean, you can ride the Classics but until you ride le Tour you haven’t experienced bike racing at the very highest level.

I’ve ridden ten and enjoyed them all, more or less. I don’t think it would be fair to rate them one against the other. 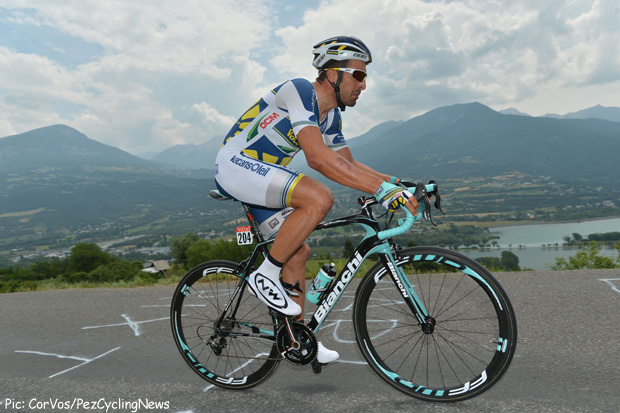 PEZ: What’s the biggest change you’ve seen in the race ?

I don’t think it’s changed that much – but what I do remember is Jean Marie Leblanc saying; ‘the rider doesn’t make the Tour; the Tour makes the rider.’ I didn’t like to admit it at the time but now I realise that he was right. 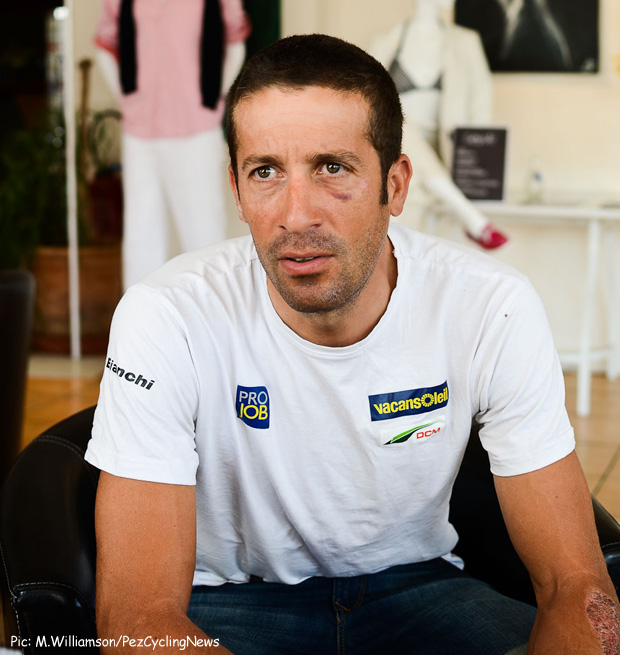 PEZ: How does the Tour compare to the Giro and Vuelta ?

There’s a big, big difference. The climbs in the Giro may be harder but in the Tour you’re at an altogether higher level.

The Tour is the highest level you can reach in cycling. If a team is selecting riders for the Giro perhaps, then they’ll have maybe five guys on good form and they’ll say; ‘well, the other four will be OK.’ But in the Tour, every team has all nine riders at the peak off their form – it’s just the biggest race there is. 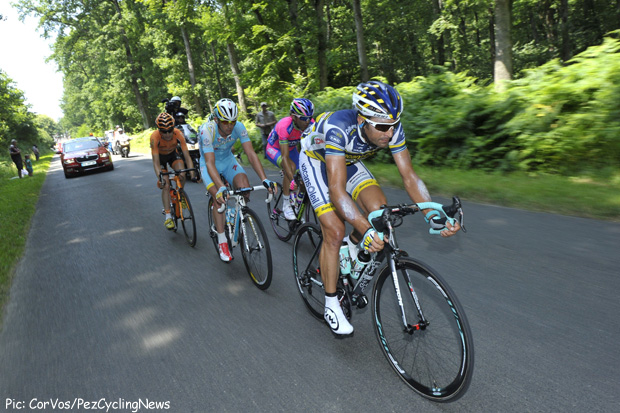 Flecha has often been on the attack so far this Tour, winning the most combatative prize here on Stage 12

PEZ: What do you like and dislike about the Tour ?

I love that the level is so high and the Media attention around the race. As for dislikes, I just accept it for what it is.

PEZ: Advice for a young pro in his first Tour ?

My time at Sky was perfect. Froome is out performing everyone but it’s not a surprise to me, or anyone who was on Sky, we all knew he had a big, big motor. He just needed a team which was going to get the best out of him – and in Sky he’s found that support.

PEZ: The last week of the Tour ?

For sure, it’s a hard week, so far the race hasn’t gone for us as we’d like but we’ll keep trying for a victory. Grand Tours don’t always go the way you’d like but we’ve raced hard and shown ourselves.

PEZ: What do you look forward to most after the Tour ?

Going home, chilling with the people who are close to me. I’ll be happy that I’ve ridden the best race in the world again – like everything in life, you have to be happy if you performed at the highest possible level.