Our talent spotter Ed Hood has been at it again scouring the globe for the next big rider. This time he’s found a young Englishman making his way through the ranks in Nantes, France with the prestigious amateur team Union Cycliste Nantes Atlantique – the home to many riders in the past who have gone on to pro careers. Could Douglas Dewey be another name on that list in the future?

We spotted Jack Bauer before anyone else and we spotted Joe Dombrowski before most; time will tell if Englishman Douglas Dewey will join Bauer and Dombrowski in the World Tour but he’s certainly a man on the up.

His first big result was third in the British U23 TT championship in 2010; he made the title his own in 2011 as well as taking a win in Belgium at Langemark. The start of 2012 saw him take a huge win in Gent-Staden, the first major amateur race of the season in Belgium as well as finishing runner-up to Giro stage winner Alex Dowsett in the British Elite TT championship.

He moved to France last season, taking six wins including the GC in the Fleche d’Armore stage race. And for this year he’s with French Division One team, Union Cycliste Nantes Atlantique. 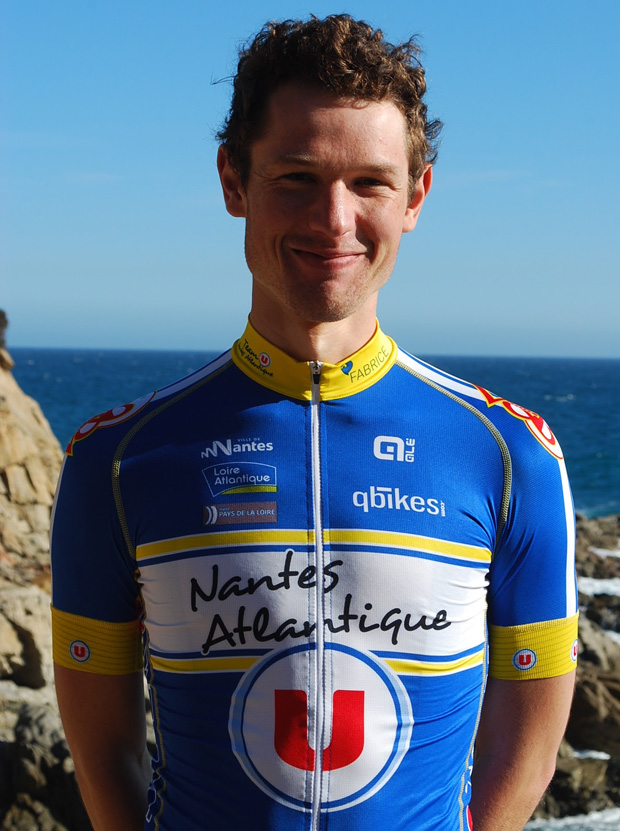 Derame is now DS with the team after spells with Credit Agricole, US Postal and Bonjour; he rode four Tours and a Giro during his career and among his palmares is the tough Tour de Finisterre. And our boy Douglas is winning already – in Bretignolles-sur-Mer as part of the Circuit des Plages Vendeennes series. 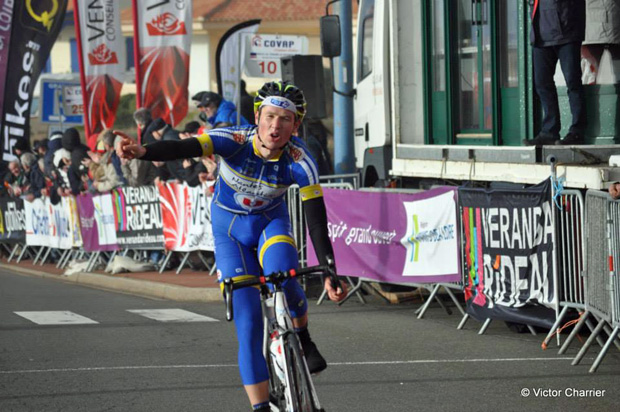 We caught up with him as he prepared for his team’s onslaught on the prestigious Coupe de France series. The races are a shop window for the pro teams and one of Nantes – and Dewey’s – major objectives for the season.

PEZ: Tell us about your win, Douglas.
It was the first of six races in the Vendee; on the coast, flat with lots of wind at Bretignolles-sur-Mer as part of the Circuit des Plages Vendeennes series. The race split and reformed all day but came together at the end.

I escaped with a Vendee U rider with about 10 K to go then attacked him at around 1,200 metres to go to win on my own; he held on for second and one of my team mates won the sprint for third – so it was a good day for us. 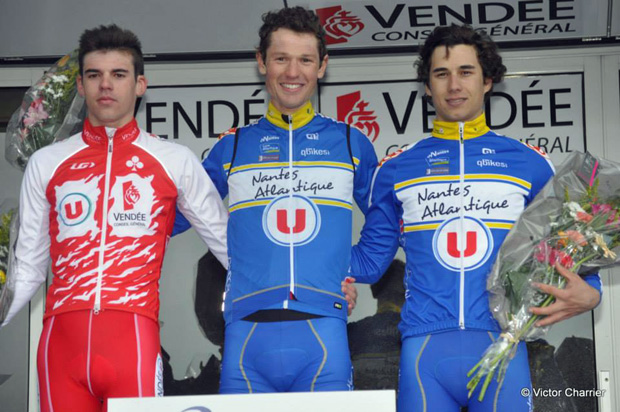 PEZ: You’ll be a marked man after that one?
Yeah, I think they took note of me and the next day I was definitely being watched – I tried a flyer at the end but they weren’t letting me go. We did five races in nine days, I did three of the six race series then the team flew us down to Marseille for a couple of races – that was pretty cool.

I took second in a bunch sprint in one for 15th place but unfortunately there was a break up the road. All the races have been different so I haven’t really found a rhythm yet. Next week we have the Manche-Atlantique race at Plumelec which is billed as the ‘Breton World Championship’ – all the guys in this area want to win that one and the new World Omnium Champion, Thomas Boudat is riding. 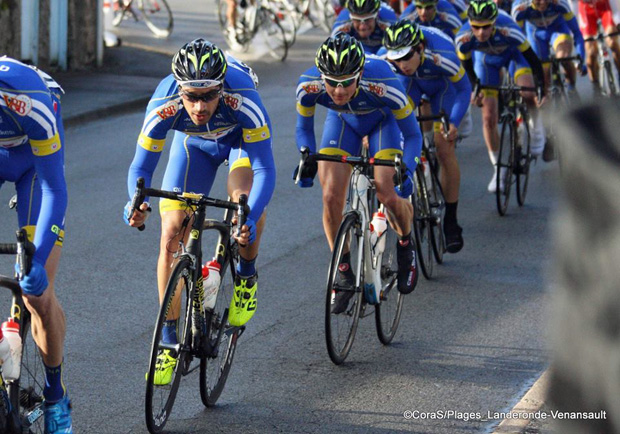 PEZ: You’re in Nantes.
It’s in the Pays de Loire region but it’s roots are Breton; Brittany is too the north and the Vendee to the south. It’s a big city, the sixth largest in France. The terrain is pretty flat and there’s a lot of wind coming off the ocean but you can train along the river valleys or ride down to sea for a longer run.

PEZ: What’s the team house like?
It’s good, there’s a Greek rider on the team, Polychronis Tzortzakis and we have a room each in a lady’s house – the room is huge, much larger than I’m use to back in Britain. And we have our own kitchen.

PEZ: Is the team looking after you well?
We had a meeting just yesterday where they were asking how everything was for me, was I happy with things – it’s very professional.

PEZ: Do they supply coaching?
Yes but I’ve been with Jon Sharples at TrainSharp back in England for three years now, so he knows me really well and I have 100% confidence in him. The team coach thinks I train too hard and don’t concentrate enough on recovery but Jon’s methods have served me well, so far.

PEZ: How was your winter?
It was the best winter I’ve ever put in – I hardly missed a session. I was in the gym twice each week and doing runs of up to six hours. I was strong in 2013 but maybe a bit feeble at the end of longer races – this year I want to be able to smash it after five hours, not three. I had a good week of training in Tenerife putting in 25 hard hours – the French guys think that I do too much . . .

PEZ: You had a team training camp in Spain.
Yes, it was good but more of a bonding exercise than hard training; we did ride the bike but it wasn’t full on – a normal week of training would have been harder for me. But it was good getting to know the guys and it was 10 days of solid French speaking – so my grasp of the language came on a lot.

PEZ: So the lingo is coming good?
Oh yes – I can converse with people now, I’m not fluent but I can chat to folks which is really nice.

PEZ: What are your team mates like?
Mostly French but there’s the Greek chap and in the reserve team there’s another English rider and a Ukrainian; he didn’t get too much training done back home – it was too cold. The French guys are all pretty strong; Fabien Scmidt is just 24 years-old but was with the Sojasun pro team in 2013 so his engine is big after all that professional racing – he’s had a win for us already in the Circuit de la Vallee de la Loire. And some of the 19/20 year olds have been at F des J training camps, so they’re on their way . . . 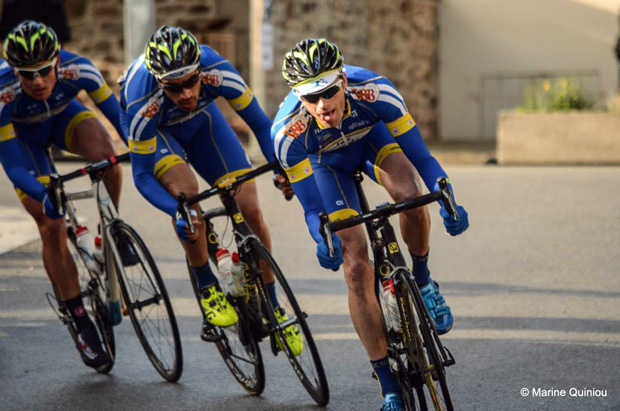 PEZ: And you’ll be competing against the obligatory ‘former professionals?’
Yeah, there are a couple of riders around who are barely 30 but ex-pros and still very handy – they’re winning at the top amateur level in France and very wily guys!

PEZ: Is there plenty of racing?
There’s a lull for a week or two but next month it all kicks off in earnest – potentially, I can race 95 days this year. That’s a lot for an amateur and I probably won’t – but yes, there’s plenty of racing. We’ll have the Tour of Brittany and all of the Coupes de France to ride – they’re a really big deal for the team.

PEZ: Goals for 2014?
The team has made it clear to us that the Coupe de France is priority; you have to do well in that to stay in the French Division One of amateur teams. They come along every five-ish weeks or so – they’ll be important to me. And in the second half of April we have three stage races on the trot – I’ll be looking to come out of those in good shape.

# We’ll be keeping in touch with Douglas as the season progresses. And if you’re wondering how big a deal the French Cups are – even at pro level team mates will happily stab each other in the back to win one. #

Alberto has his sights on tomorrow’s stage