Riding With Bonaparte In Corsica

With this weekend’s Criterium International racing around the beautiful island of Corsica and the Tour de France to do the same come July we thought now’s a good time to take a closer look at this spectacular place. Our Literary Editor Leslie was the lucky man who went there with bike in tow and although he didn’t race around Corsica like the pros, after a week of riding on this far from flat island it felt like he did.

2013 will mark the 110th anniversary of the Tour de France and its 100th edition. France is a pretty big country but even still you would think that in more than a century the race would have covered all of the Hexagon but in fact there are corners where no Maillot Jaune has never been officially present. And one of those is Corsica, which will see the Grand Départ and two more stages as the Tour goes there for the first time in 2013. Pezcyclingnews travelled to the fabled Île de la Beauté, the Island of Beauty, to see what the pros will be facing on June 29.

Corsica is quite different from other régions (administrative districts) of Metropolitan France. Geographically it is closer to Italy than to France and situated just north of Sardinia. After a long history (the ancient Greeks, Carthaginians and Romans were there at various points) it came under the rule of the Republic of Genoa from 1282 until 1755. For a brief time it was independent until the French took it over in 1769. It retains its own distinctive language, closer to Italian than French, and enjoying official recognition. Napoleon Bonaparte was born in Ajaccio, the largest city, in 1769 but outside of his birthplace nobody seems to care much. 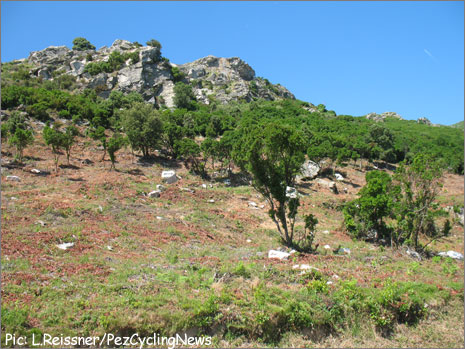 The island is 183 kms in length and a maximum of 83 kms in width. The least economically-developed area of France, it lives from tourism and has 200 beaches; nearly half of the place is reserved as park. What should really get the attention of Pez readers is the fact that 2/3 of the island is mountain. There are only 300,000 residents as well so unless you are hanging around those beaches a lot of the roads will be empty.

During World War 2, Corsica was the first French territory to be liberated and it served as a gigantic staging area for the Allies with 14 airfields but most of them are gone and commercial air traffic goes to facilities in Calvi, Bastia and Ajaccio. However, connections are really not that great and the vast majority of visitors come via ferry from France or Italy. We took the overnight ferry from Savona to Bastia and found it smooth and comfortable. 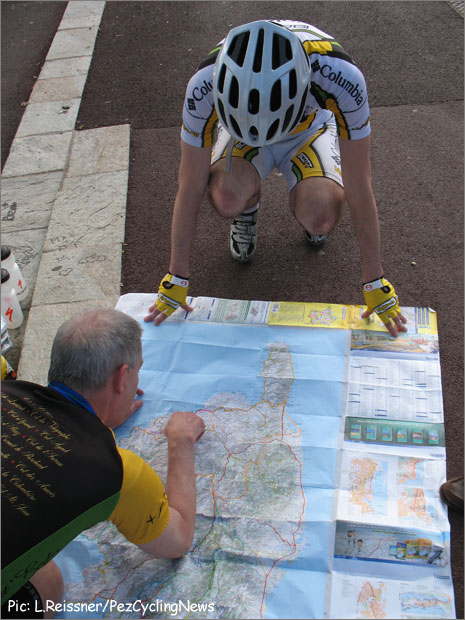 Modern GPS devices be damned – a parking lot and a big map is all we need! It’s an island, how lost could we really get….

Our group assembled itself at the main square in Bastia near the harbour and set out on the first leg of a week-long trip. With palm trees and Italian flair, Corsica looks exotic and as we left the busy town we found that exotic also means blazing hot. Although we had picked a starting date in late June that should not have been too bad the perspiration ran freely. That may have also been due to the impressive climbing that began even before we left Bastia towards the interior. Our first major climb, the Col de Teghime, was 10 kms and at the top we had a superb view of both coasts of Corsica. There was a memorial to the fighting in World War Two and soon we enjoyed a fast descent on excellent roads down to the western coast, past vineyards and into the village of St-Florent before heading south along the coast towards Calvi. This would be a typical day for us during the week: anywhere from 85-135 kms for riding but generally never less than 2000 m of climbing. 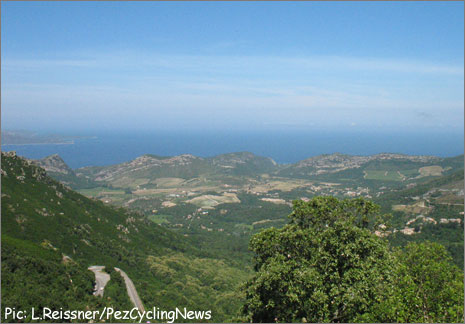 Calvi is a charming town with an old citadel where local legend has it that Christopher Columbus was actually born (remember the Genoa connection!). The Old Town features interesting restaurants featuring the local cuisine. Food in Corsica offers a lot of game, particularly wild boar, ham, goat and sheep cheeses (notably brocciu), fish and chestnuts used in a lot of interesting ways. Like most of France, it is not particularly vegetarian-friendly if you’re that way persuaded and breakfasts tend to be insufficient for cyclists. As an island economy, you can expect things to cost more than on the mainland as so much needs to be imported. 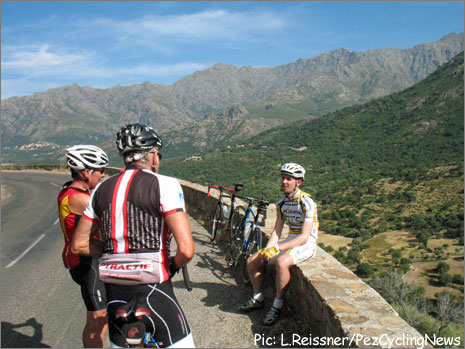 From Calvia we headed further south towards the small harbour city of Porto. Many in our group agreed this had to be one of the most spectacular cycling stretches we had ever done, with the bright blue sea below us to the right and the parched, desert landscape to the left. Soon after Calvi traffic disappeared and we had the road to ourselves. We discovered why after around 12 kms as we discovered that Corsican roads are either very good or incredibly bad, with no happy medium.

We found ourselves on some of the worst potholed roads we had ever travelled. We were to come across many segments like this on our trip and could never understand the inconsistent nature of road building on the island. 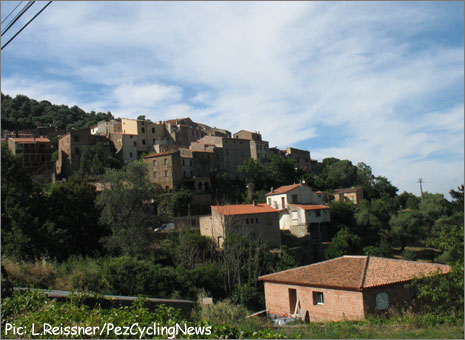 After Porto we turned inland for our next day of riding, with 95 kms of riding taking us up a massive climb immediately after our departure as we rode to the northeast up the mountain range in the middle of the island. This was followed by an equally massive descent and then a small climb that brought us to the university town of Corte. It was a lively place but we only stopped briefly as one final climb on a distressingly busy road took us to our overnight stay in San-Pietro-de-Venaco in a funky old hotel with great atmosphere.

The next day saw us do the majority of our riding in the interior before coming back to the coast south of Ajaccio and then turning inland yet again toward Burgo. The scenery is truly breathtaking (and not just because of the heat and the climbing!) and there are fabulous vistas over the rugged landscape, with its stumpy pine brush and aching dryness. Villages are few and traffic light, although the drivers in Corsica tend not to be as careful as those on the mainland.

We passed occasional reservoirs in this parched country and were often confronted with big black pigs wandering along the road, as well as dogs that were far too lazy to chase anything, given the heat. Our route after Burgo took us north through the interior up two major climbs but the day ended with a phenomenal descent on superb pavement to Zivaco, interrupted by a break to cool off at a local waterfall.

From Zivaco our next trip to us further north back to Corte, where we enjoyed excellent ice cream and wandering around the shops on the interesting main street. Corsica has had an impressive history of violence and one of the souvenirs being hawked in the little shops was a mean-looking piece of hardware described as “a vendetta knife.” Our final day on the road brought us from Corte back to Bastia and our ferry.

As mentioned, most of the roads that we travelled had no traffic to speak of. However, Corsica does not have a lot of limited-access highways (none, actually) so sometimes we found ourselves on a Route National mixing it up with trucks and heavy car traffic. This was primarily on stretches between two of the larger towns and there were often wide shoulders to ride on. Although Corsica is a noted cycling destination, we saw only a handful of other riders during our week there. 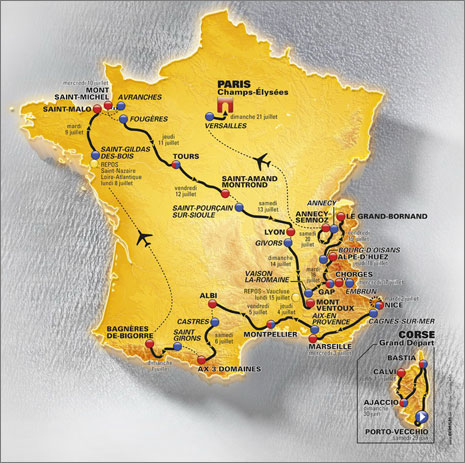 The 2013 Tour, starting in Corsica and staying 100% French for the entire parcours.

The Tour de France will begin in Porto-Vecchio, farther south than we reached, and go up the coast in a 212 km flat stage to Bastia. The next two days of medium mountain stages will see the riders going from Bastia to Ajaccio and then from Ajaccio to Calvi, where they will depart for Nice. This will be the first Tour in a decade that will be held on French soil only.

Beautiful, wild, challenging: Corsica has much to offer and the Tour de France provides yet another reason to go there in 2013!

Useful contacts:
The official tourism website for Corsica is at www.visit-corsica.com/en.

For ferries to Corsica check out www.corsica-ferries.co.uk

When not reflecting on the experience of going over his handlebars on Stage 3 of his Corsican adventure, Leslie Reissner may be found considering vendettas at tindonkey.com.