This year the Philadelphia International Cycling Championship ended its 28 year run to be reborn as the Parx Casino Philly Cycling Classic. The new race is run on the same course as previous years but leaves out the old start and finish area on the Ben Franklin Parkway resulting in a shorter 12 mile lap. The race now starts and finishes atop the infamous climb up the Manayunk wall where the grade peaks at a steep 17%! 5 trips up the wall gets the women a 60 mile race while it’s 10 trips and 120 miles for the men. 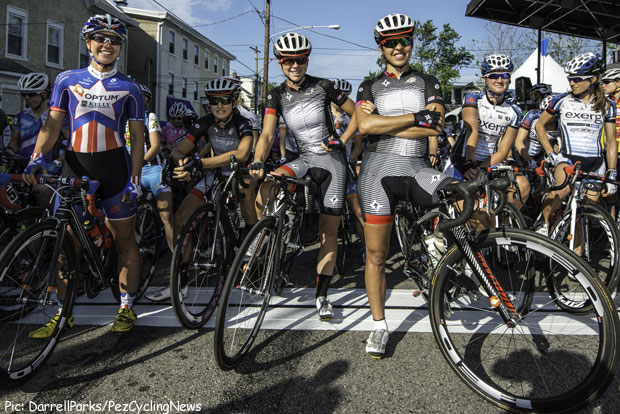 Women relaxing at the start before their 8:30 AM wake up call.

Also new to this year’s race were the start times for the men and women races. In years past the women would start about 10 minutes after the beginning of the mens race. This had them riding on the same lap as the men except 10 minutes behind. Of course a few years ago the women actually caught up to the men causing much confusion and chaos on the course. The new race format eliminates that possibility by totally separating the men’s race from the women’s. The women now start bright and early at 8:30 with the men going off at noon. While this is great for the racers it makes for an extremely long day of shooting! 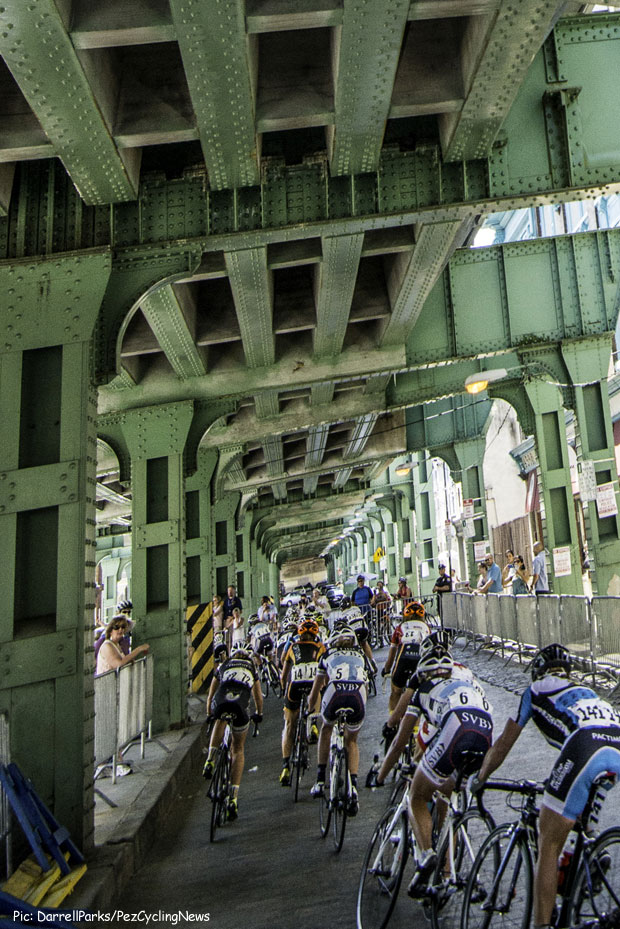 Women hit the cobbles of Cresson Street before making the left turn onto the wall.

After the start of the women’s race I made my way down to the bottom of the hill and arrived on Main street. Lap times were estimated to be around 30 minutes so I had plenty of time. I was quite surprised to see people along the course at this hour of the morning though there weren’t quite enough fans to make for an interesting shot. I backtracked to the bottom of the hill and shot my old standby under the elevated train tracks. Though this time I shot them from behind just to get something a little different. I really like the tunnel effect of this shot as it seems to go on forever though the race is only under the tracks for about 50 yards. 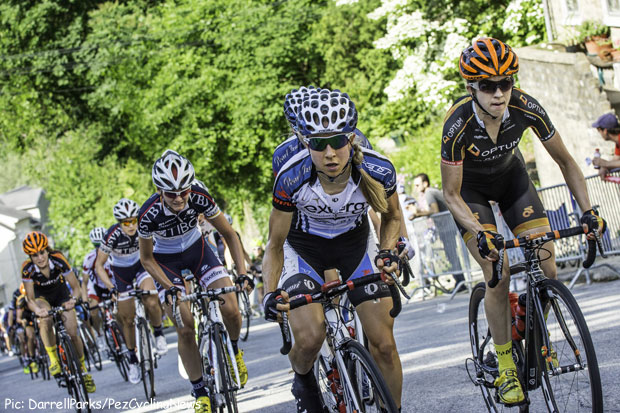 Working the 17% grade of Lyceum Avenue.

I ventured back up to the steepest part of the wall to try and catch the girls struggling with the steep slope. If I were only half as fit as these girls I would be happy. The front group had no problems climbing the wall and actually provided a cool breeze as they passed! They were flying! 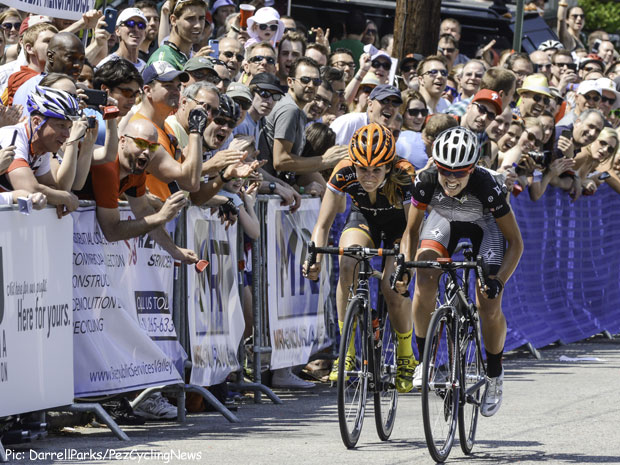 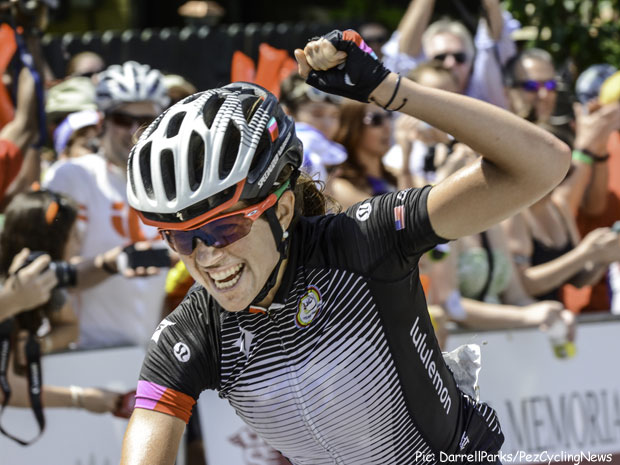 After 5 laps the race would come down to a 2 woman sprint on top of the wall. In the end winner Evelyn Stevens (Specialized-Lululemon) was able to come around Canadian Joelle Numainville (Optum-Kelly Benefit Strategies) for the win. Congratulations to Evelyn Stevens and the Specialized-Lululemon team for the win! And to the same amount of prize money as the men for the first time in the history of the race. 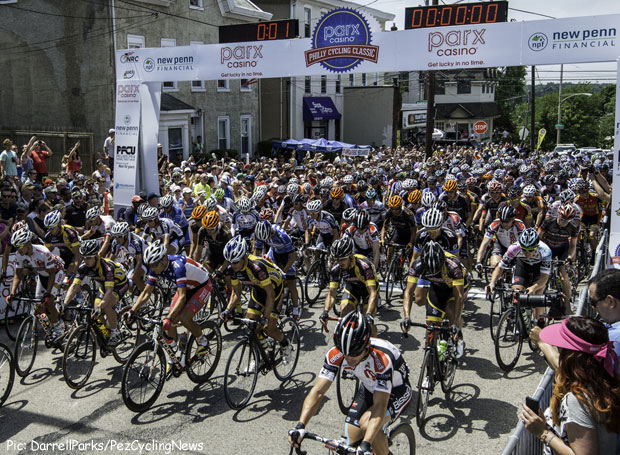 The mens race rolled out at noon with the temperatures starting to climb into the upper 80’s. It was going to be a scorcher for sure. The crowds had slowly been building and the party on the wall was starting to take shape. Beer was flowing and the fans were displaying their signs of encouragement to the riders. A dad was running his son through the sprinkler at Obriens watering Hole. A couple of hours from now the sprinkler would be packed with fans. 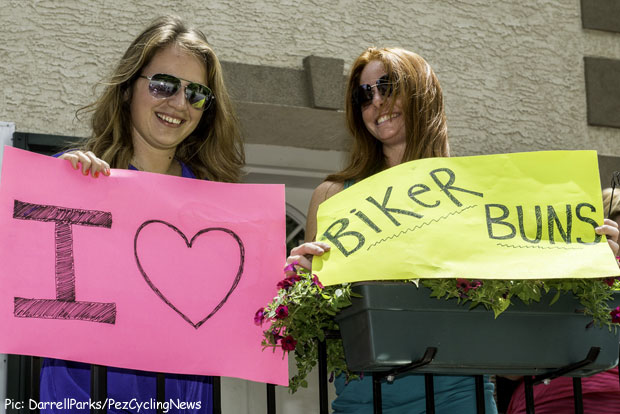 These girls had several signs waiting to help the riders up the hill.

I had my first shot up the hill planned out for some time. I wanted to get the classic shot of the riders from the back as they ascended the wall. All 180 riders stacked up across the entire width of the road from top to bottom of the 17% grade. With the old course I wouldn’t even get to the wall until after the second or third time up since I was shooting the start way back on the Ben Franklin Parkway. By the time the race shuttle got me to the wall the peloton had typically dwindled in size due to attrition or breaks. Now that the race was starting on the wall it was just a 5 minute trek to my vantage point! 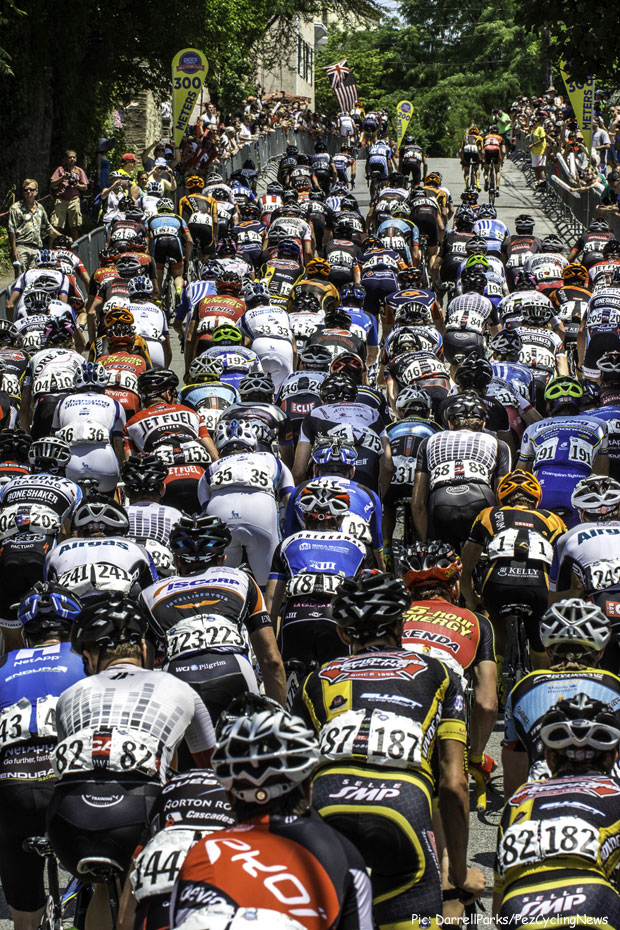 The entire Peloton ascends the Manayunk Wall on the first lap

I then moved back up the wall a ways and caught a shot of the first breakaway of the day. This one consisted of Dion Smith (Predator Carbon Repair), Tom Zirbel (Optum), David Williams (5-Hour Energy) and Logan Hutchings (Elbowz Racing-Boneshaker). They would manage to dangle off the front with a 30 second gap for 4 laps. 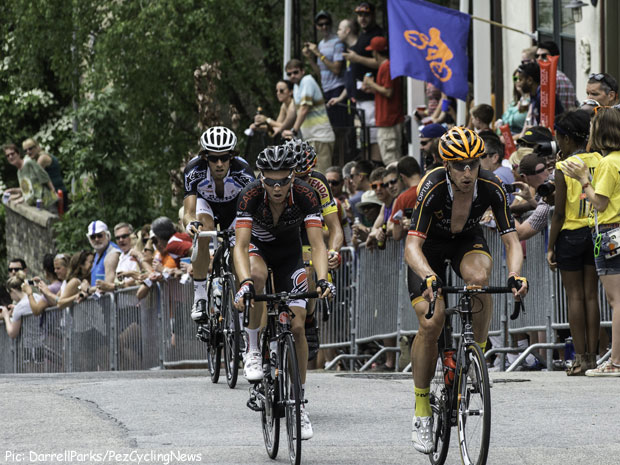 I then made my way back up to the top to grab the media shuttle over to Lemon Hill for a couple of laps. Lemon hill is a good spot for getting a little variety instead of just shooting the wall all day long. I had probably hiked up and down the wall about 4 times to this point. The temperatures were now pushing 90 degrees and rain sprinkles were starting to pop up around the course. I was really looking forward to sitting down in the air conditioned media shuttle for a few minutes! The other reason to make the trip to Lemon Hill is to listen to announcer Richard Friese pumping up the crowds! 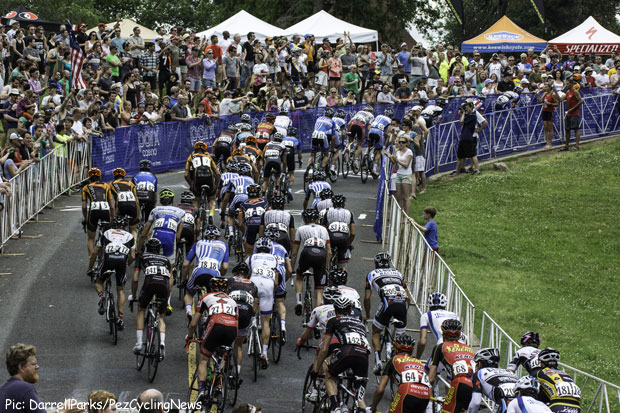 After shooting and trying to avoid the rain for 2 laps at Lemon Hill I shuttled my way back to the start/finish line on top of the hill. We were dropped off right in front of the race so I was able to position myself to shoot the riders as they made the turn off of the hill. These types of turns provide a great way to get an individual shot of most all of the riders. This ensures you have a shot of any of the riders that might end up doing well in the race to use for later. 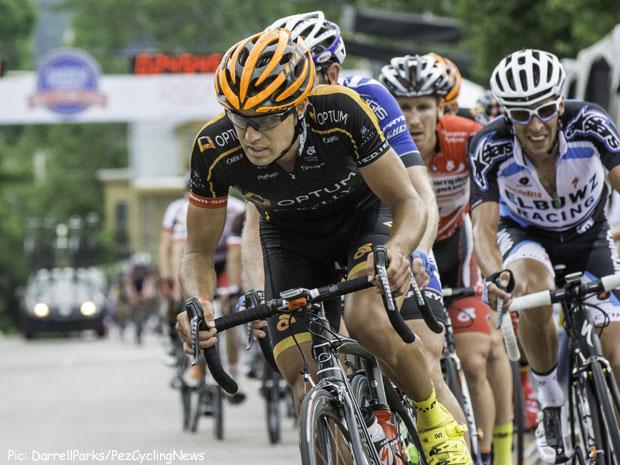 Jesse Anthony begins his recovery from the climb as he makes the turn off the wall.

There’s now just a few laps left in the race and it’s getting quite warm. It’s a great time to head back down the hill to O’briens Watering hole. Here I’m able to catch the riders as they try to cool themselves off in the mist of the sprinkler. I can also shoot down the hill before the riders get to the water. It’s also a popular place for the fans to high 5 the riders. 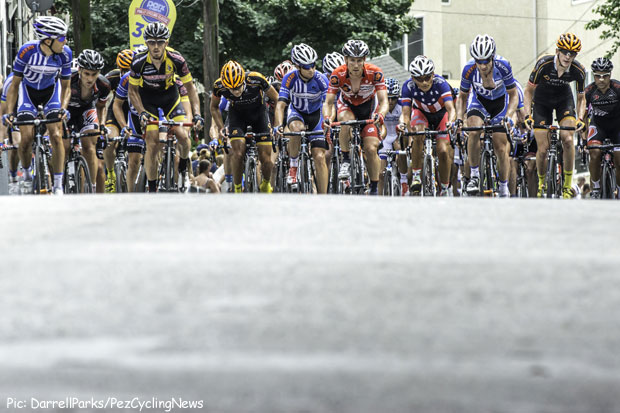 The heads of state crest the hill on the penultimate lap 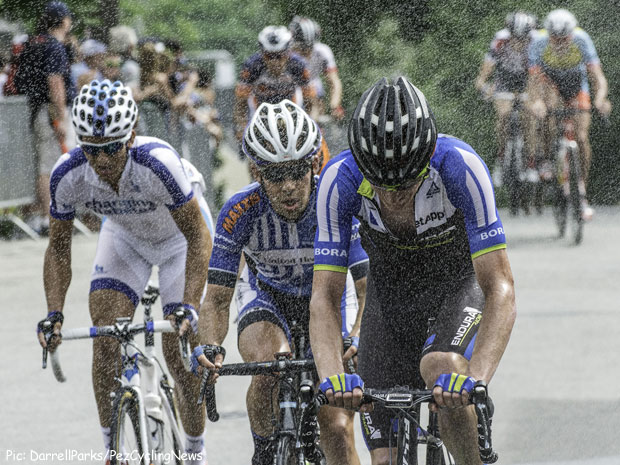 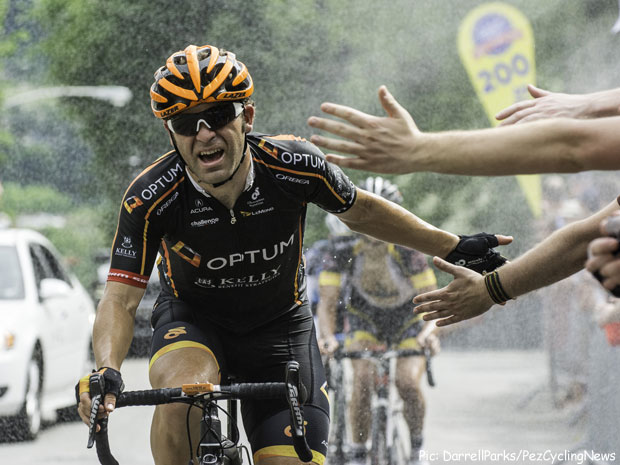 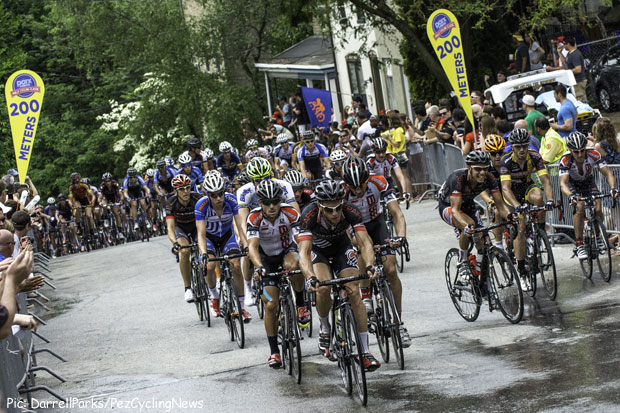 It’s all starting to come back together on the wall

Nine laps down and one to go. Time to head to the finish and fight for a spot to shoot from. The arrival of the motorcycle police let you know the race is coming to a close. You can hear the fans screaming down the hill as the riders approach though they are still not in sight. Then there it is! The top of a helmet slowly emerges from the crest of the asphalt. It’s a lone rider in a blue and white kit. You can tell it’s a United Healthcare rider from the uniform but you can’t quite make out which one. Now locked on target you keep pressing the shutter button in short bursts to ensure your camera’s buffer doesn’t fill up. The announcer is blaring out rider’s names but you can’t quite understand him over the roar of the crowds. Another rider starts to appear cresting the hill. You remain focused on the first rider and continue shooting as he makes his way across the line. 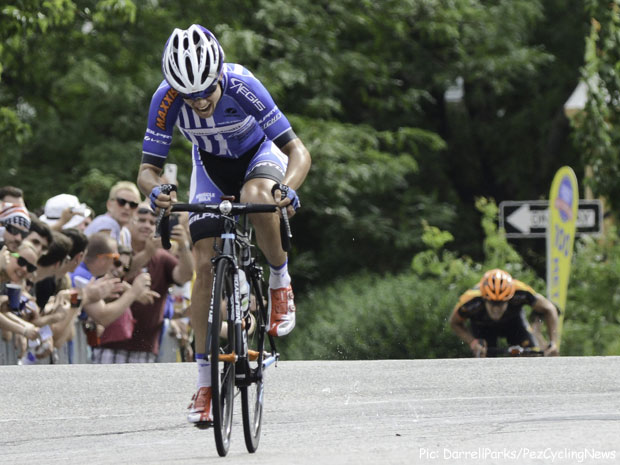 Kiel Reijnen has Jesse Anthony hot on his tail as he sprints toward the finish. 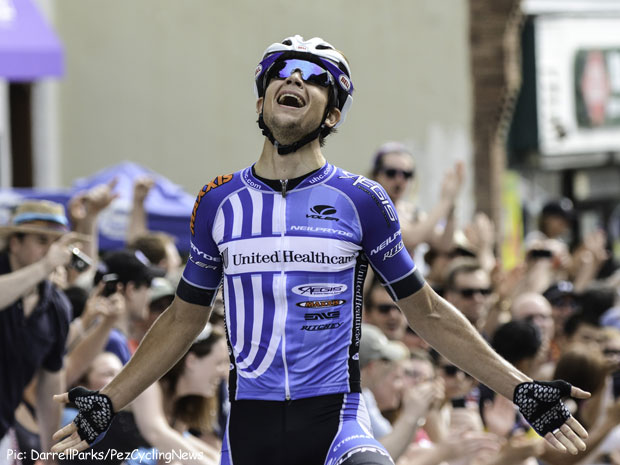 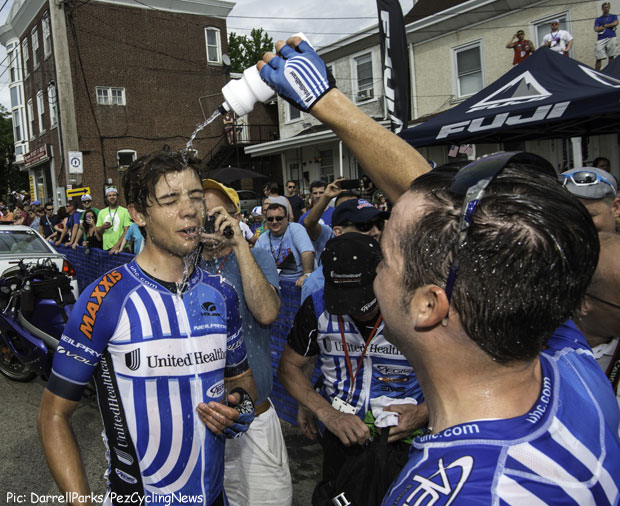 Teamate Lucas Euser provides some cooling relief to Kiel after his victory. 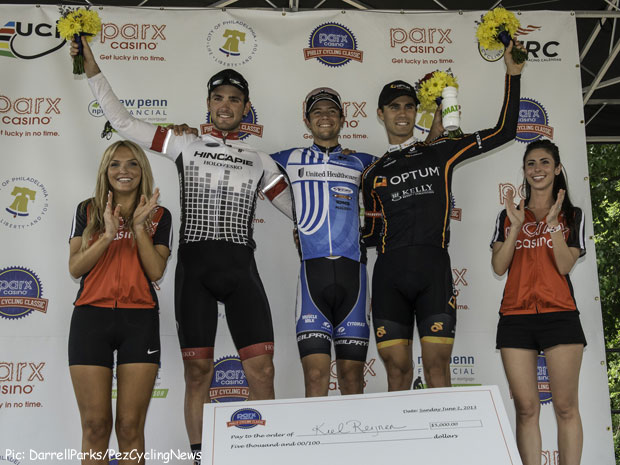 Jesse Anthony and Joey Rosskopf round out the podium.

Keep it tuned to PEZ tomorrow for a full interview with the men’s winner Kiel Reijnen as he takes us through his day. And for more photo goodness check out www.darrellparks.com