The Air Force Cycling Classic’s Clarendon Cup is part of USA Cycling’s National Criterium Circuit and has been one of the Washington DC region’s premier Pro/Am races since 1998. It’s known as one of the most difficult criterium races in the U.S. due to the technical course and big fields and always provides a great show for spectators. Ace photographer Darrell Parks was there for PEZ to take it all in. 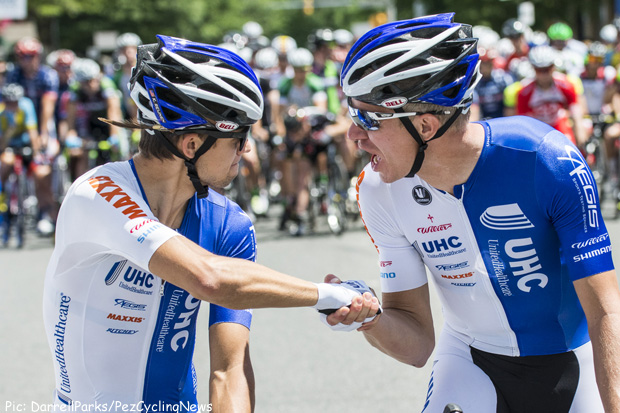 Kiel Reijnen and Jeff Louder of United Healthcare get pumped at call ups. It takes great teamwork to dominate US criterium racing like these guys. 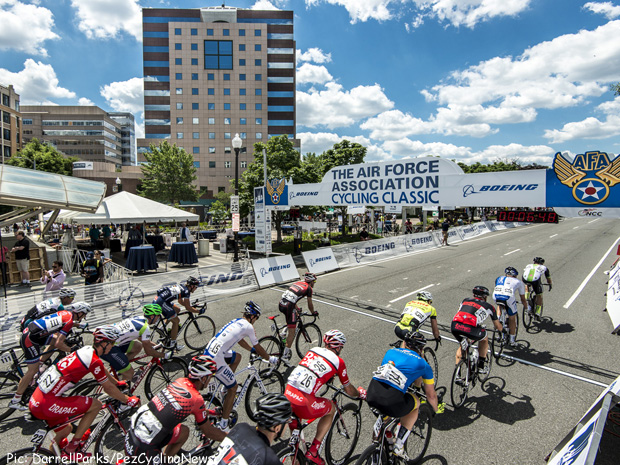 Shooting from the awards stage gets me the elevation I need to shoot down on the peloton giving depth to the image. The weather was nothing short of awesome with giant puffy clouds littering the sky making it a wonderful day for scenics. 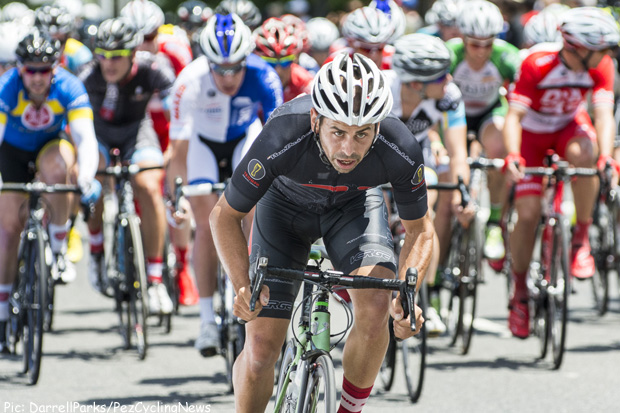 Local cycling hero Jared Nieters took on the pros with full force and attacked off the front early in the race. This attack was a futile attempt but he followed every move throughout the day and eventually made it into the break that lapped the field! Talk about bragging rights. 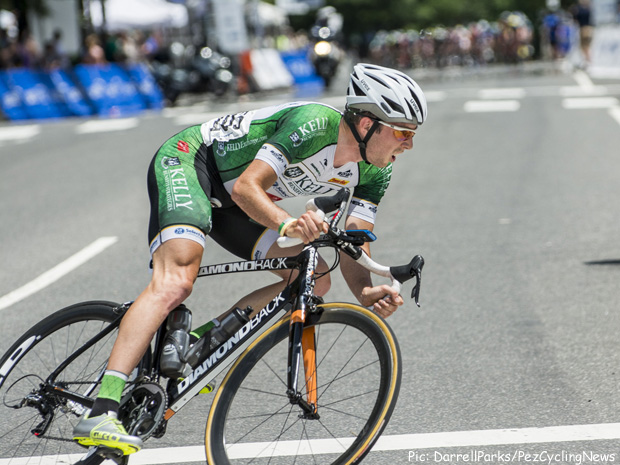 Another elite level racer familiar to the northeast racing scene, Ben Frederick of Kelly Benefits, went out hard early in the race. Ben managed to get quite a gap on the field and stayed away for a considerable time. 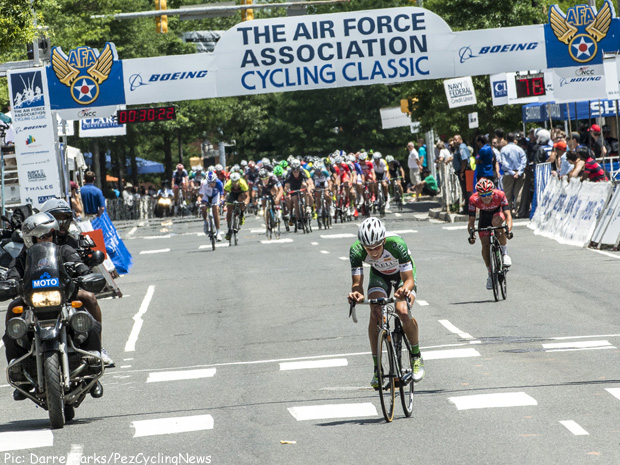 But one man is no match for a hungry peloton and he was slowly reeled back into the fray. 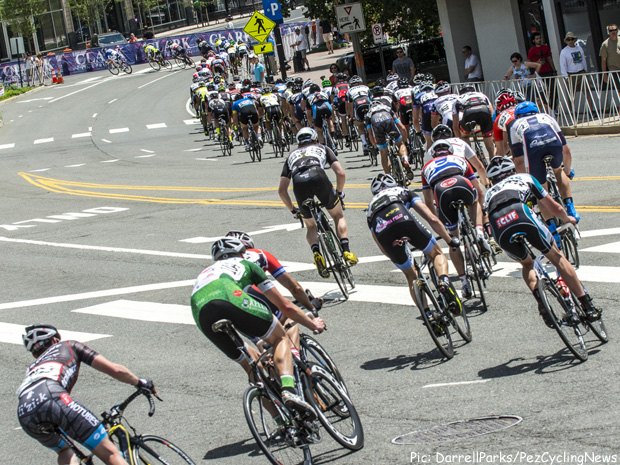 The peloton screams out of turn one and gains speed on the downhill into turn two. Turn two can be taken at high speed as it’s a nice wide sweeper into a slightly uphill straight. 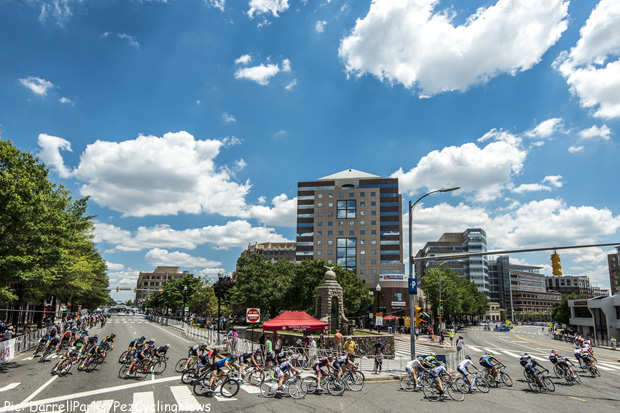 A few quick words with the TV cameraman in turn one and I was able to climb up onto the TV camera scaffolding to gain some elevation. Shooting from this higher angle accentuates the curve of the turn. To demonstrate this effect at home, hold your beer glass with the top at eye level so you’re looking straight across the rim. Now slowly lower the glass an inch or two. By lowering the glass (elevating your view) you can now see the curvature of the rim. Now you understand the basic principal behind the need for all cycling photographers to scrambe for higher ground!

This shot reveals just how big the pro men’s field is as it stretches from the first turn straight all the way to the beginning of turn two. The clouds are once again prominently featured from this unique vantage point and make this one pop. 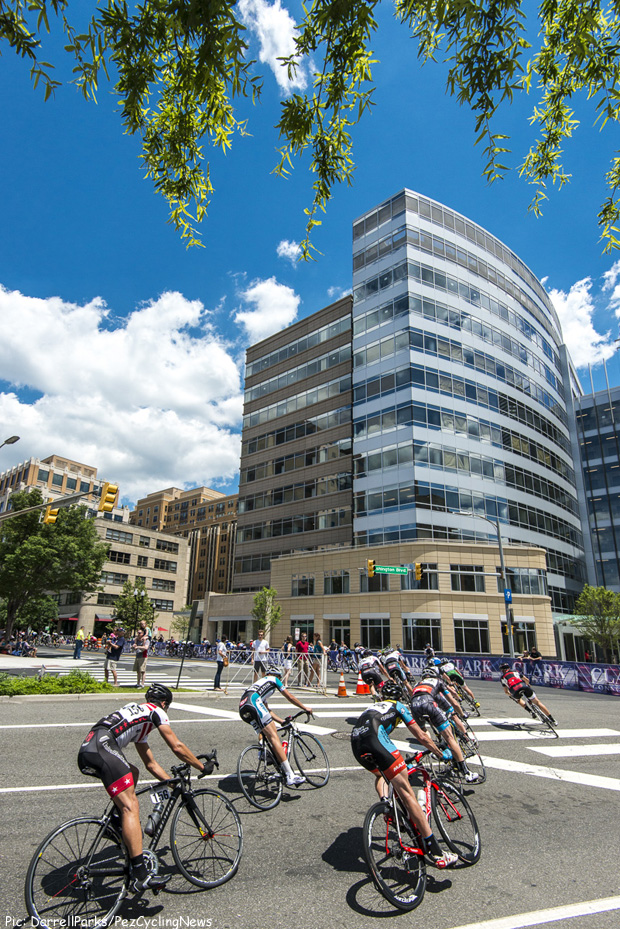 This year I wanted to feature this new building that was still under construction during last years edition of the race. I really liked the way the curved glass face reflected the clouds in the sky. Placing the overhanging tree branches in the frame added depth to the image as well as a nice frame to the top. 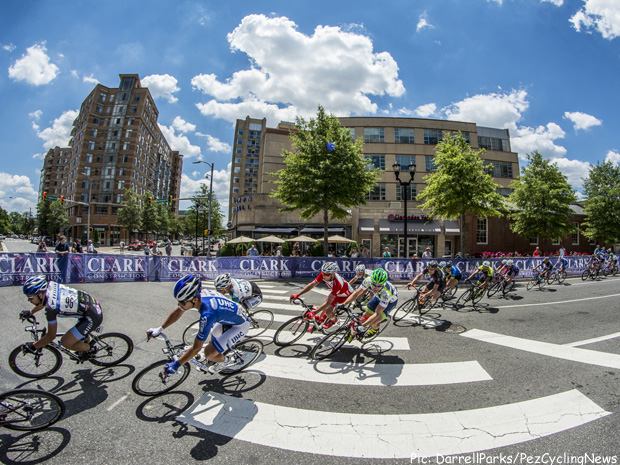 Here I incorporated the super wide angel perspective of my fish eye lens as the riders take the sweeping line of turn two at speed with the concrete jungle looming in the background. Eventual winner, UHC rider Kiel Reijnen, can be seen back in the peloton after the break he was in had lapped the field. And then there’s those clouds again. 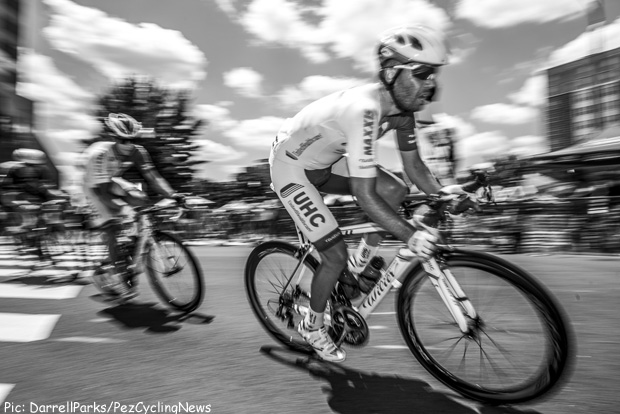 A new opening in the fence at turn 3 allowed for a different perspective from the inside of this tight turn. I always enjoy a nice low angle, slow shutter speed, motion blur shot when given the chance. A high contrast monochrome processing completes the effect. Here UHC rider Jonathan Clarke pulls teammate Kiel Reijnen though the turn. 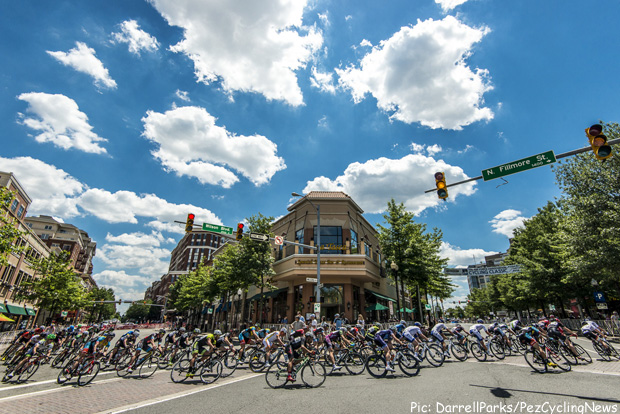 Remember the beer glass analogy? Here the opposite effect is in place. Even though the peloton is well distributed through this tight final turn the riders are rendered as a straight line in this image. I’m shooting this shot from the low point in the outside curve which puts me at eye level with the “rim” of the turn. Oh yeah, there’s those pesky clouds again! 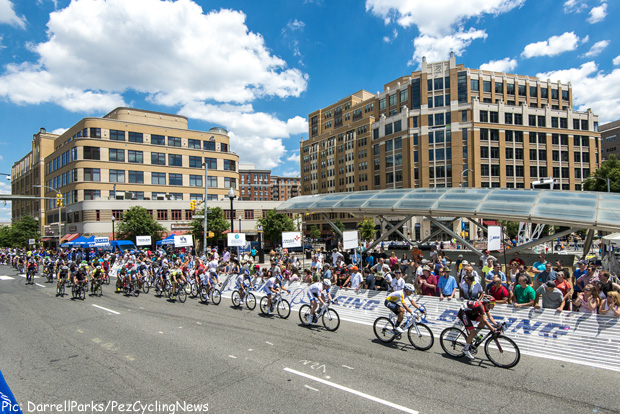 Here the UHC boys start positioning at the front of the field as the race heats up with about 10 to go. The Clarendon skyline is constantly changing as most of the taller buildings in the background were erected in the last few years. 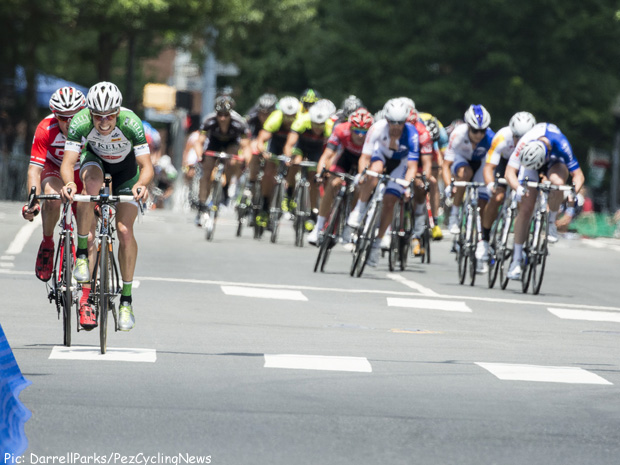 Ben Frederick tries his luck again and the peloton scrambles in the background to hunt him down. And though he’s caught with less than two to go his efforts don’t go unnoticed. The race jury grants him the most courageous rider jersey for his ferocious attacking style. 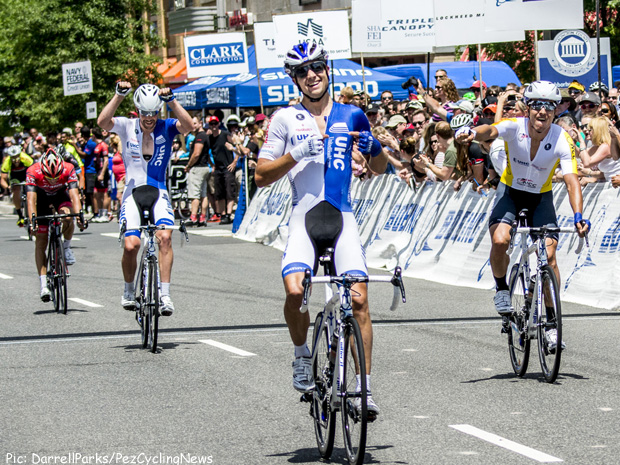 But in the end it’s the powerhouse United Healthcare team taking the honors with Kiel Reijnen, who’s obviously still on great form after winning last week in Philly, taking the win. His UHC teammates join him in celebration as it was truly a team effort. 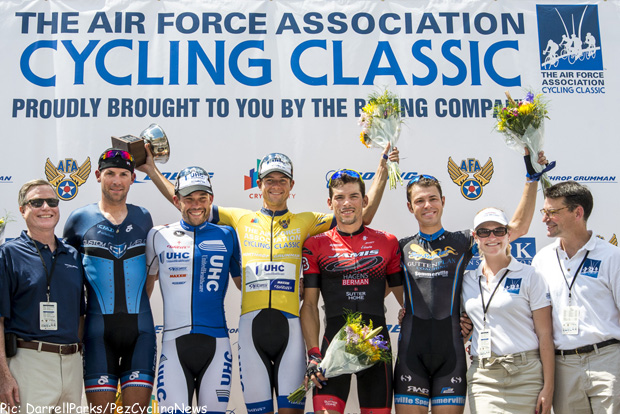 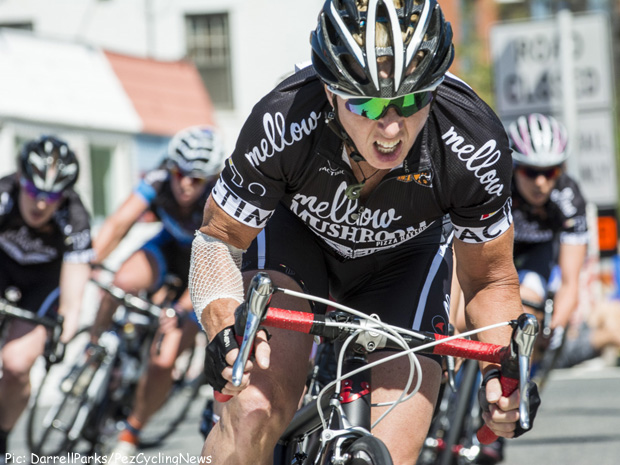 Laura Van Gilder still attacks hard in the Pro races even though she’s been competing at this long enough to be racing Masters class. Here she goes to the front early and flies out of the first turn of the circuit. 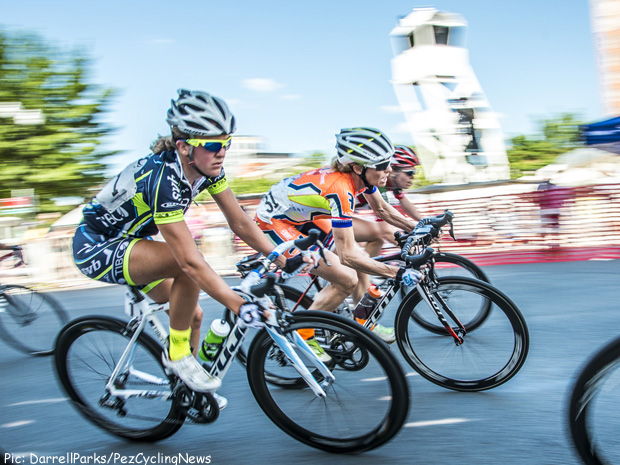 Tina Pic has also been racing at the pro level, and winning, for quite some time. After a year hiatus she’s back racing bikes at the elite level. 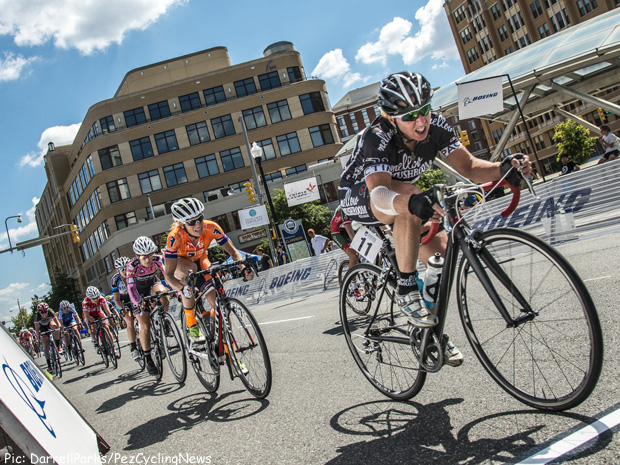 Here Tina sits on Laura’s wheel as they come through the finish in the final laps of the race. Laura may be one of the only other riders in the field with more professional wins then Tina. 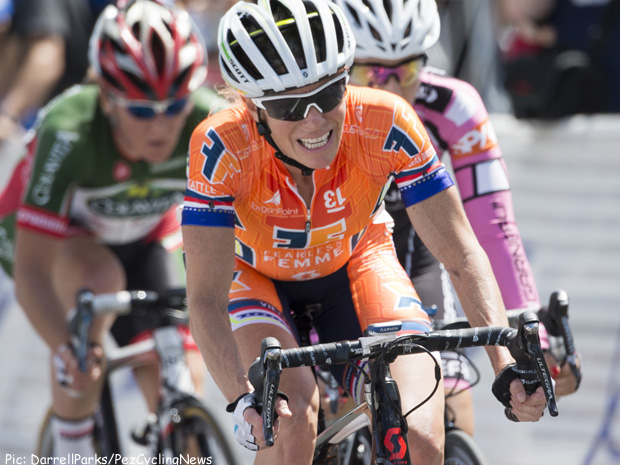 A tight shot of Tina reveals the effort required to get to the finish line after the climb out of the final turn. It’s not very steep but it’s enough to get the heart rate up when taken at race pace. 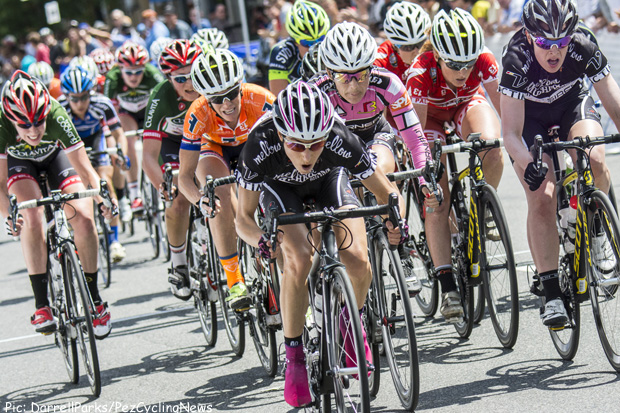 The remnants of the peloton struggle to stay together on the bell lap. These girls are flying off the finish stretch. 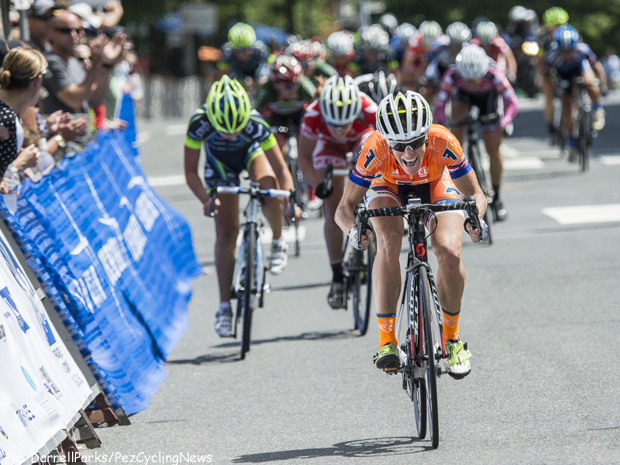 Tina chooses the inside line for her sprint and rides away from the field. 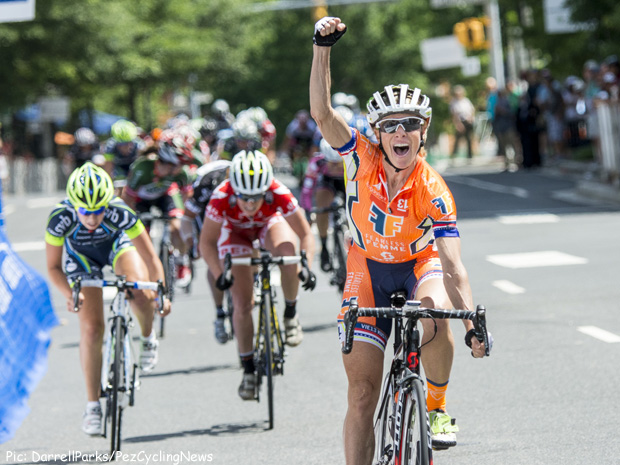 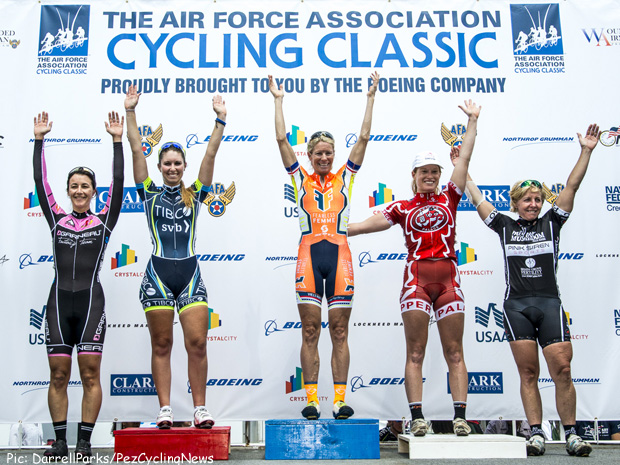