What more can be said about Sunday’s incredible race that hasn’t already been said? Let’s instead turn the spotlight over to Italian photographer Angelo Giangregorio whose spectacular images speak for themselves.

Chasing the races is always an unpredictable activity but nothing could have prepared me for what happened during the 104th edition of the Milano Sanremo. 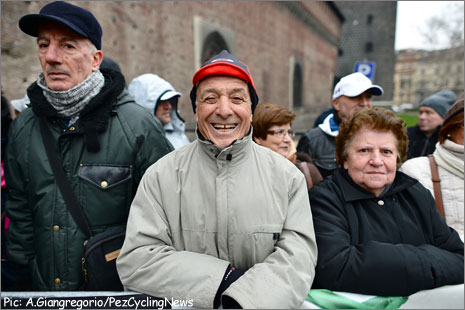 When I met Ale in Piazza Castello, the starting point of the race, we chatted about a million things: the riders in good shape, a new South African team (!), the last winners of the race and so on, we didn’t spend a word about the weather forecast, we were aware that rain and snow were expected, but simply we couldn’t believe that in the middle of March the Winter could hit so hard. 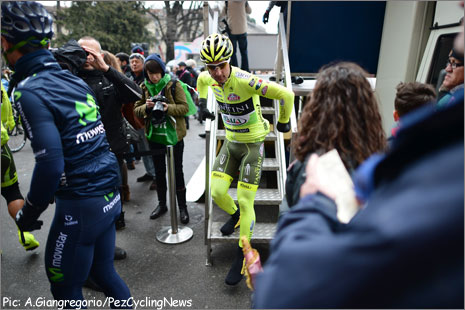 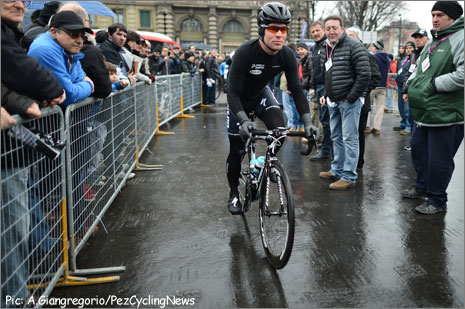 While wandering among the team buses I met a lot of friends, amateur cyclists like me that love to see in person their favorite champions and to live the frenzy moments before the start of the Primavera. I can say that virtually all the Milanese cycling community was there. 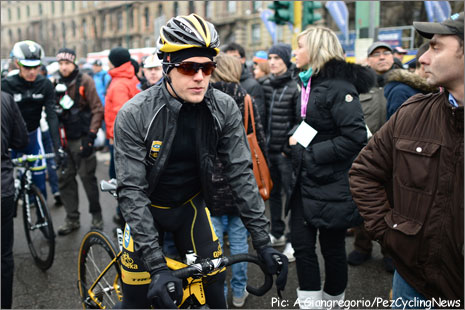 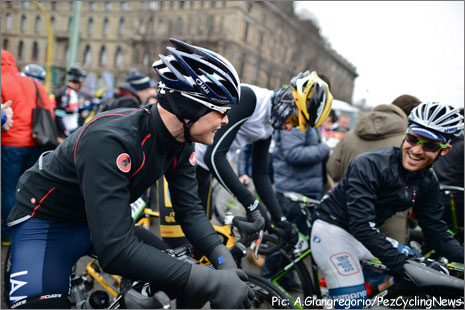 I was lucky enough to meet one of the best cycling photographers in the business: Taz Darling. Since I’ve never seen her, I wasn’t sure that it was actually her, but the presence of Guy Andrews, the editor of the famous British cycling magazine (Rouleur) was the proof. I then overcame my usual shyness and introduced myself, what lovely people!

I had just the time to make some more photos, say ciao to Ale and the race was already started under a light rain. I ran to my car praying that the engine will start immediately and not like the last Giro di Lombardia but ok, this is another story…

I headed to Masone and the Passo del Turchino where I had planned to wait for the race, but well before Ovada at the foot of the Ligurian Apennines the rain was already transformed into snow. Now… I’m not a very good driver. I’m a cyclist. Just saying that I cycle every year five times the amount of kilometers that I drive by my car, and the roads started to be covered by the dreaded white veil. 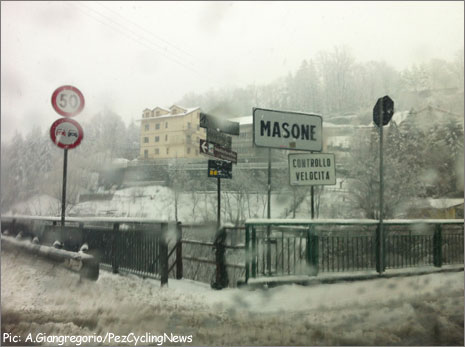 As soon I reached Masone I understood that the race could not maintain the intended route. As soon as I left the motorway, roads were completely covered by a deep layer of snow. I stopped immediately and, luckily, just in that moment Ale called me telling me to come back to Ovada where the riders would get on their team bus and restart the race in Arenzano skipping the Turchino… what a relief!

While driving back to the gathering point my head was full of emotions, excitement, sadness, concerns. Looking at the roads I couldn’t imagine the conditions of the riders and in fact as soon I saw the first, Matteo Montaguti, the excitement left the place to the empathy for the difficult situation. 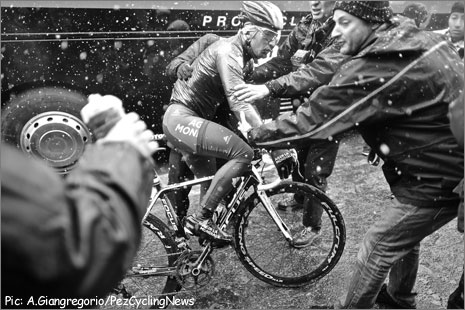 Taking photographs of that moment was a privilege for me and I tried to be ethic and fair taking just one photo of Manuel Belletti, the AG2R rider arriving at the point shaking and nearly-frozen. 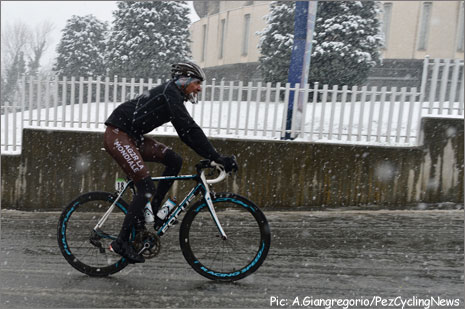 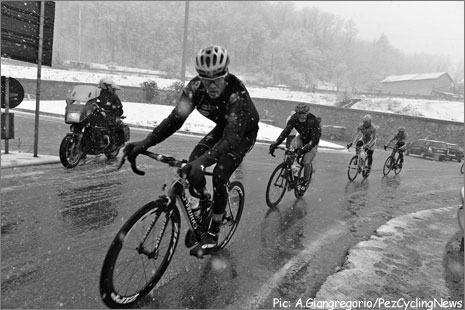 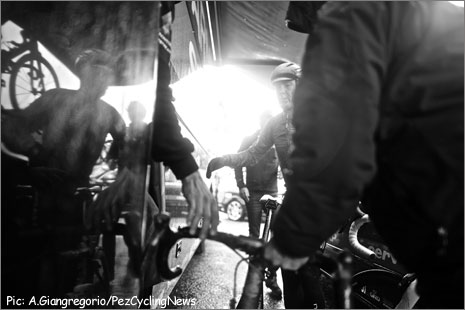 When finally in Arenzano, I decided to wait for the re-start shooting between the team buses of the BMC and Garmin, actually my favorite teams along with Androni Venezuela. At that point I was really really hungry, when Charlie Wegelius, the Garmin DS, loaded my hand with a huge amount of M&M’s, thank you Director! 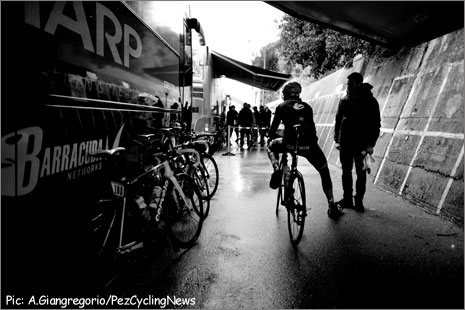 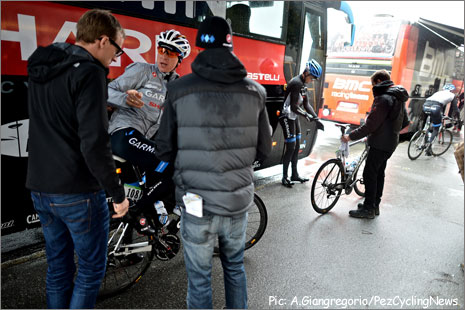 Time to go to Sanremo! It’s a great thing to drive your car into the route of the race. Very exciting, too. The rest is already history: Ciolek won, Sagan lost and Cancellara is still on top of the best riders. What a day. 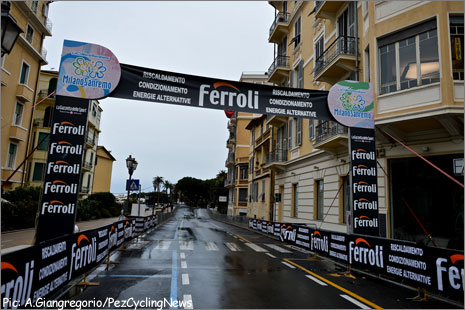 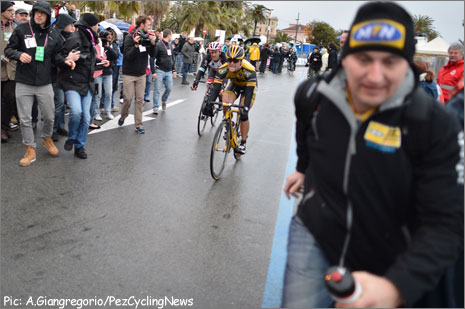 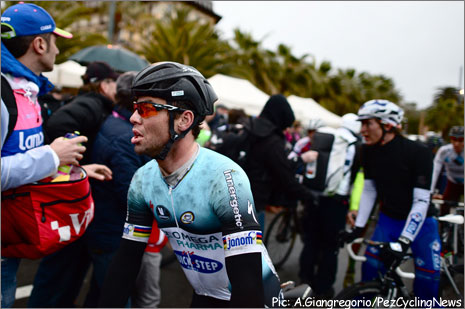 Inside The Peloton With Martin Hacecky