Photo Report: The Philadelphia Cycling Classic is always one of the best races of the year on the North American Cycling Calendar. The sights, sounds and party atmosphere of the famous Manayunk wall have given the race legendary status amongst riders and fans alike and once again ace photographer Darrell Parks was in the middle of it all taking the best pics for PEZ. 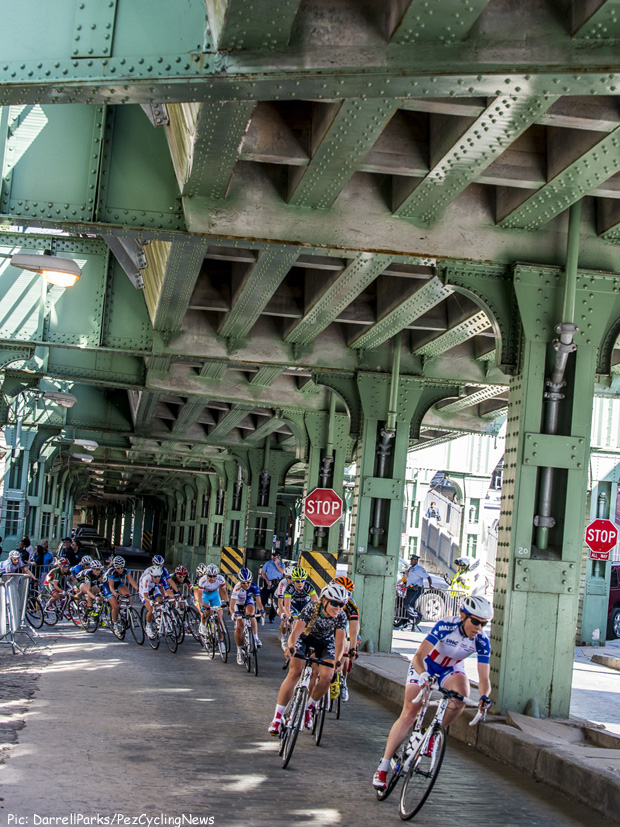 The race runs on the same course every year, and after shooting Philly for the past 9 years, it’s gotten a bit harder to get a unique image. Shooting under the elevated train tracks at the bottom of the hill is one of my favorite locations as the tracks have that grungy old city look and some very interesting lines. For this one I chose to shoot them straight on just before making the turn onto the climb. This is their first time up the wall and Allison Powers is on the front ready to make here attack that resulted in a solo break away lasting for most of the race! 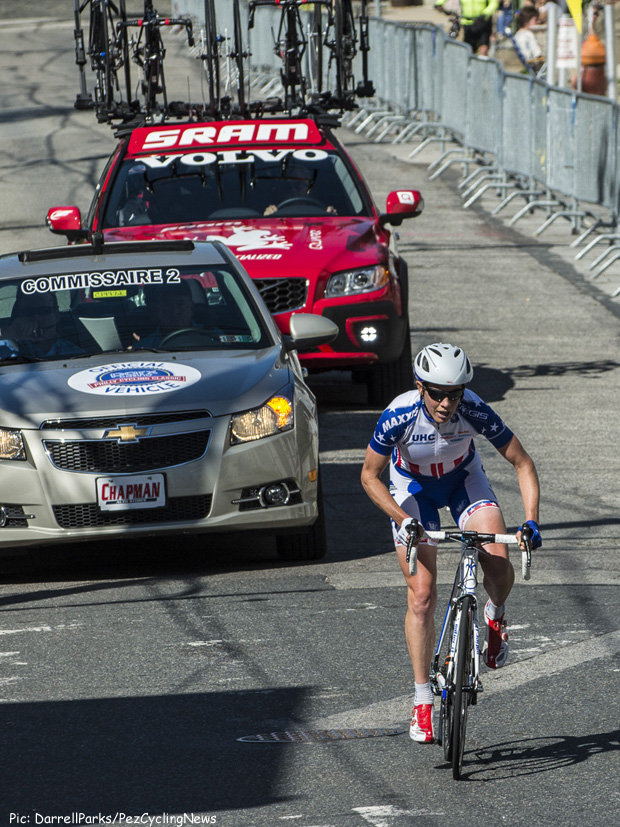 Here I’ve perched myself at the top of the lower slope of the wall. On the second lap through, newly crowned national champ Alison Powers was now a good minute ahead of the chasing field. 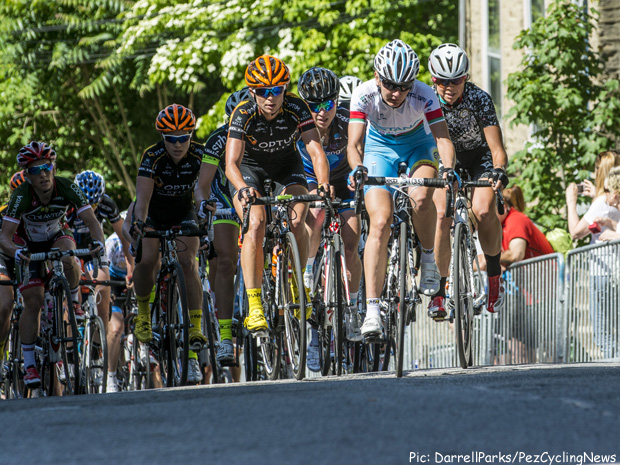 Here the women are cresting the steepest part of the wall. It’s still early enough in the morning that the sun leaves most of the road in shadow. However the strong riders on the front, including eventual race winner Evie Stevens, are highlighted in the image as they are awash in the sunlight. 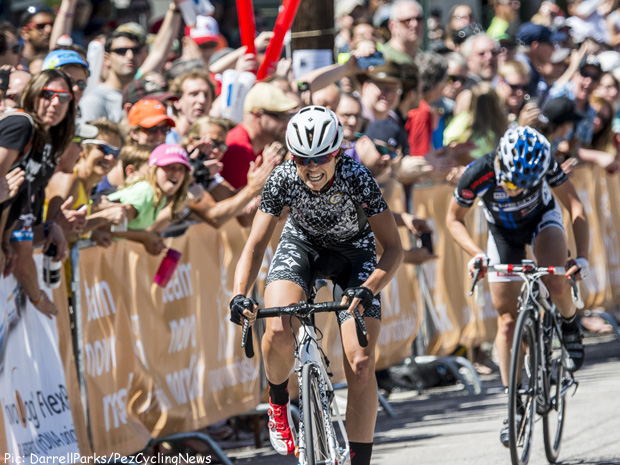 You can shoot the finish from 2 designated spots on the road about 20 meters from the line. The race organizers leave an opening in the center of the road to allow the riders passage when they cross the line. On the left side of the road you have an open backdrop that leaves a docile atmosphere to the image. I chose the right side as you really get a sense of the intensity of the crowds with them cheering wildly in the background. 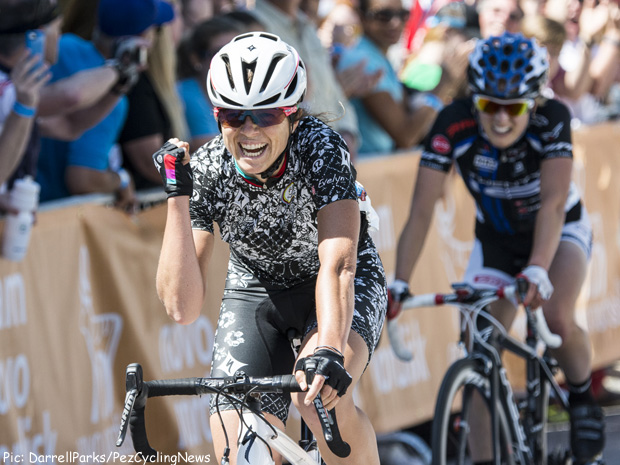 It’s great when you can capture an image of the winner celebrating with the runner up with the look of “disappointment” on their face. The opportunity does not always present itself, so when it does you need to be ready. The lighting in this shot adds a bit to the story as winner Evelyn Stevens is basking in the sunlight while runner up Lex Albrecht is cast in shadow. 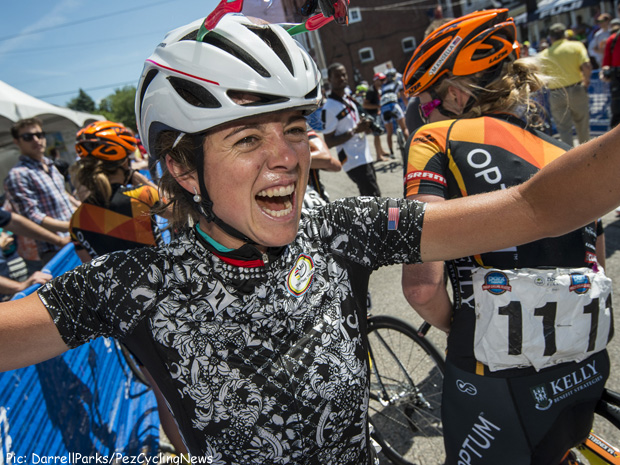 The real celebrations happen after the finish so I always try to get to the winner as quickly as possible. The challenge is getting a clean shot as it’s always a media photographer scrum as all the photographers are circling the winner for the shot. I think this shot shows just how happy Evelyn is with her second consecutive win in Philly! 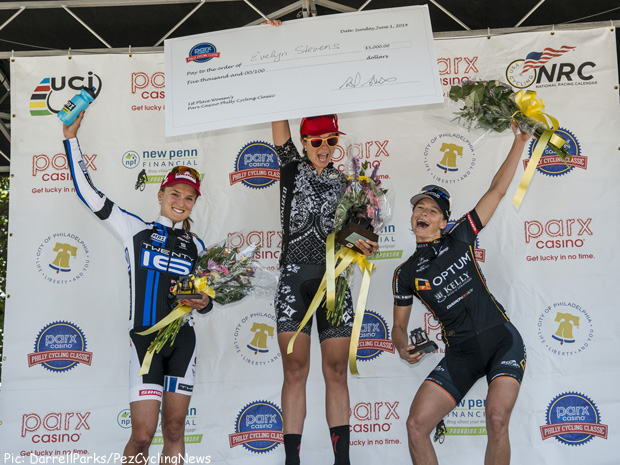 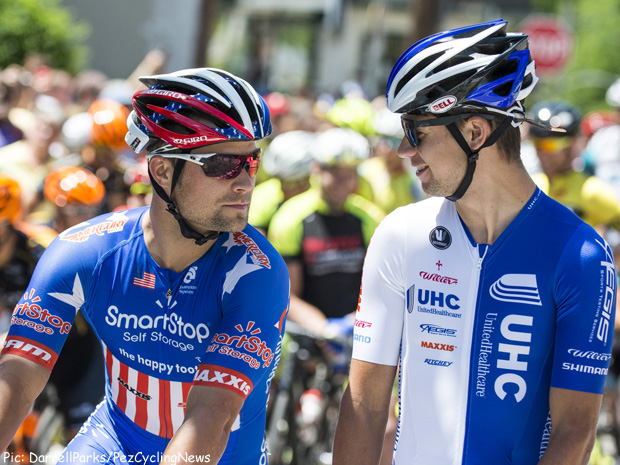 Pre race call ups allow you to get intimate shots of some of the distinctive riders in the race. Here we have the newly crowned men’s National Champion Eric Marcotte and now 2 time Philly Champion Kiel Reijnen enjoying time in the limelight. A telephoto lens and large aperture blurs the busy background and makes the riders pop out of the image in an almost 3 dimensional way. 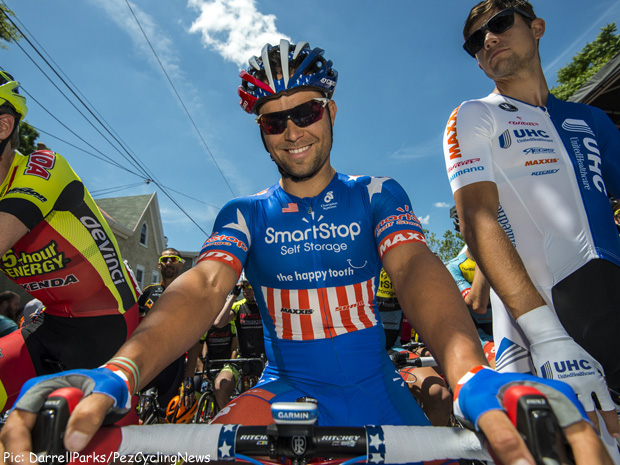 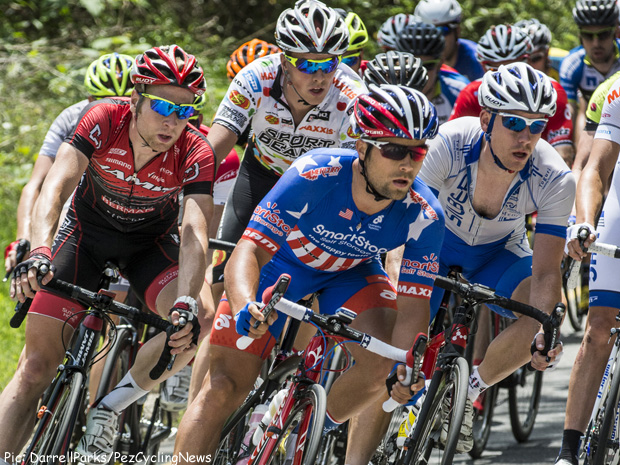 Here’s Eric showing off his Championship Jersey while in the race. When trying to get a shot of a specific rider, I like to park myself on the opposite side of a tight turn. This tends to thin out the pack and increases the chance of seeing the rider you’re trying to capture. 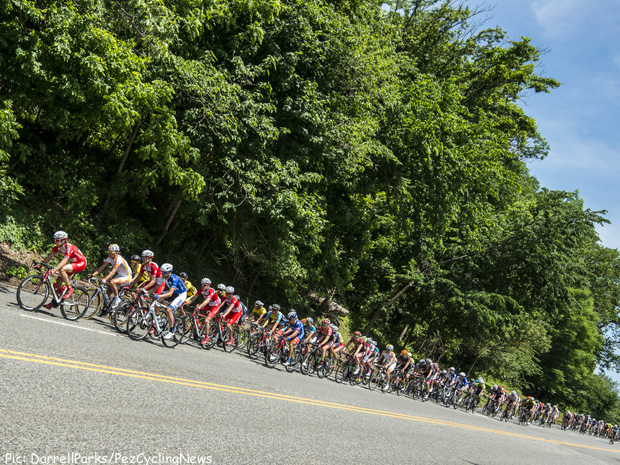 I then took a few of the early laps on a photo motorcycle. This allows me to get out on the other parts of the course for some variety. Though Philly is all about the Manayunk Wall, the rest of the race course can be interesting as well. Here the peloton is strung out as they hammer along Kelly drive early in the race. I liked the clean lines and background of this shot and the slight angle adds a bit of tension and interest to the image. 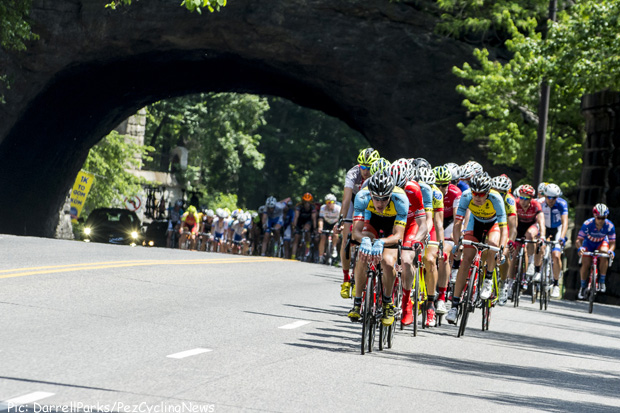 The tunnel on Kelly Drive is also one of the more interesting features of the race. This shot from on the motorcycle captures the front of the group as they emerge from the darkens with the end of the peloton still in the shadows of the tube. 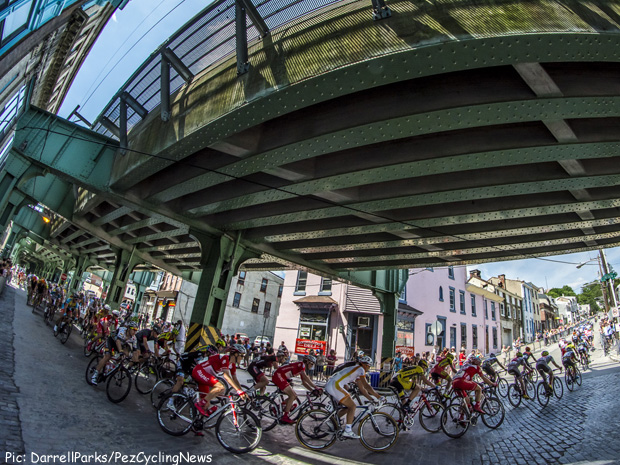 Having had enough time on the moto I ventured back to the bottom of the wall and the elevated tracks. I wanted to capture the experience of the peloton turning onto the street below the tracks as well as the turn onto the lower slopes of the infamous climb. To do this required use of my “fisheye” lens. This lens has a 180 degree super wide field of view. It also tends to distort the image on the top and bottom which can add to or take away from the aesthetics of an image. In this instance iI believe it adds to the dynamic of the race and turned out to be my favorite image of the race! 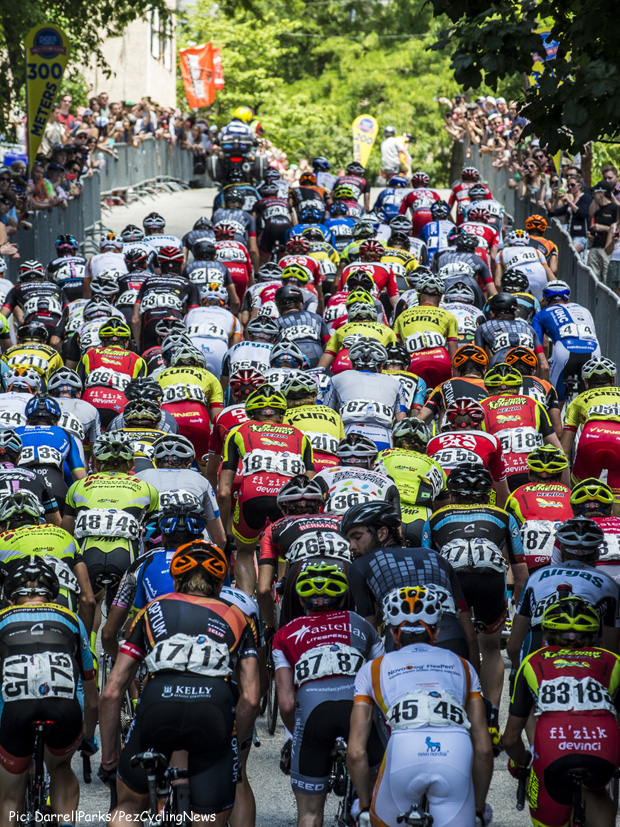 This is one of my prerequisite images to capture at Philly. It’s been shot every year but I don’t seem to get tired of it. The sun fell behind a cloud just as they filled the hill so the lighting is soft and muted as opposed to prior years of bright sunny exposure. 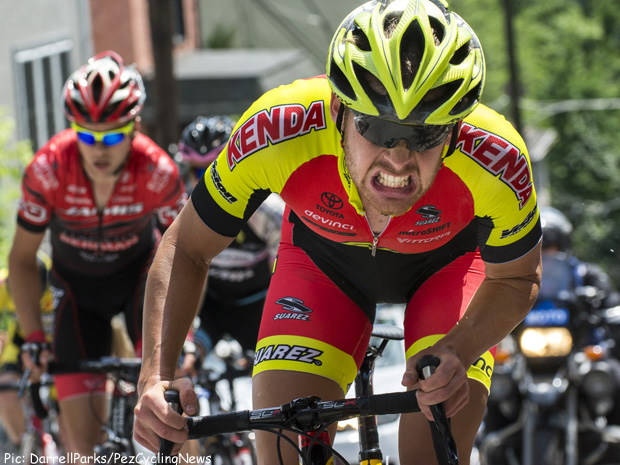 I always shoot the final laps of the race from the steep parts of the Wall. 7 or 8 trips up the 17% grade asphalt will tire even the strongest of professional cyclists. In this image I’ve jammed myself up against the barriers in an attempt to get as close as possible to the struggling riders without impeding their ever so labored forward progress. Here Team Kenda rider Christian Parret grimaces in pain as he grinds out a snails cadence to get over the climb. 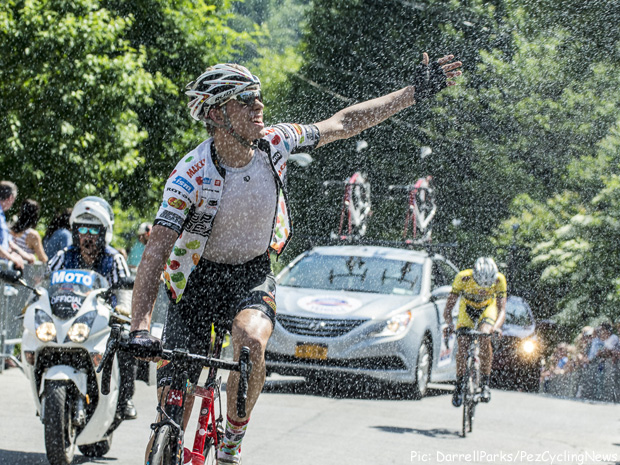 Another famous landmark at Philly is “O’Briens watering hole”. This rider cooling station consisted of a contraption perched out over the edge of the road that would dispense cold dripping water onto the riders if they so desired to ride underneath it. This year the sprinkler was not in place. How could this be? this was a Manayunk wall tradition! No worries, as the temperature started to climb, a hose with a gentle spray was substituted and the tradition was in place. Here a Jelly Belly rider takes advantage of the cool liquid goodness. 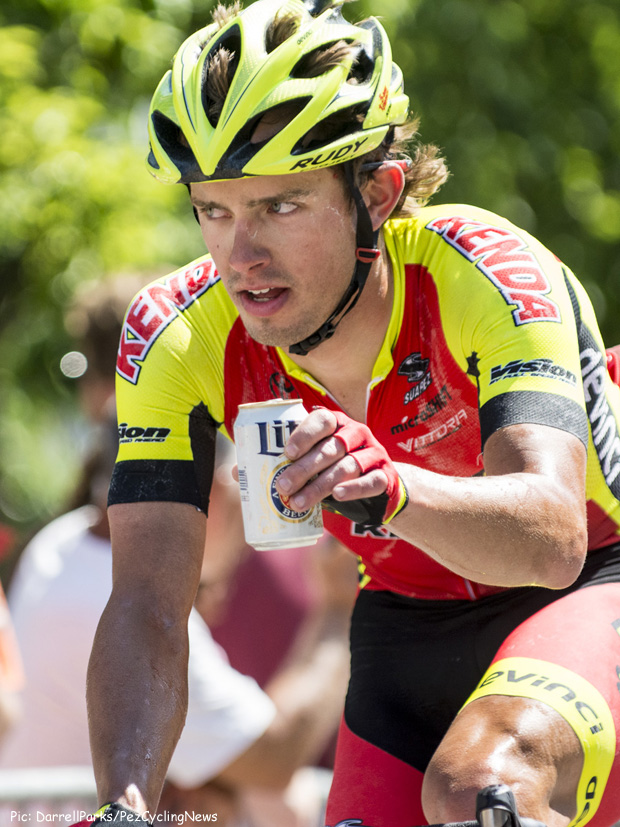 And then on the penultimate lap we have the tired domestics who have done their job hammering away at the front of the race. They are done for the day as it’s now up to their teammates to take over. Now it’s Miller time! 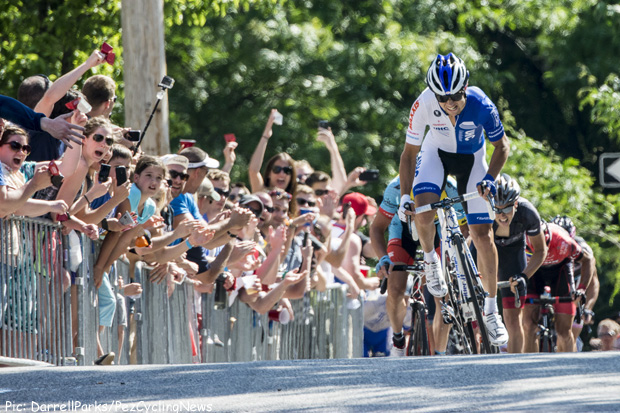 This shot of the “Sprint” finish is about 75 meters down the hill from the finish line. I remembered this from my previous years so I decided to bring my longer telephoto lens to better capture the action as they crested the hill onto the finish straight. The crowd reactions really make this one work . 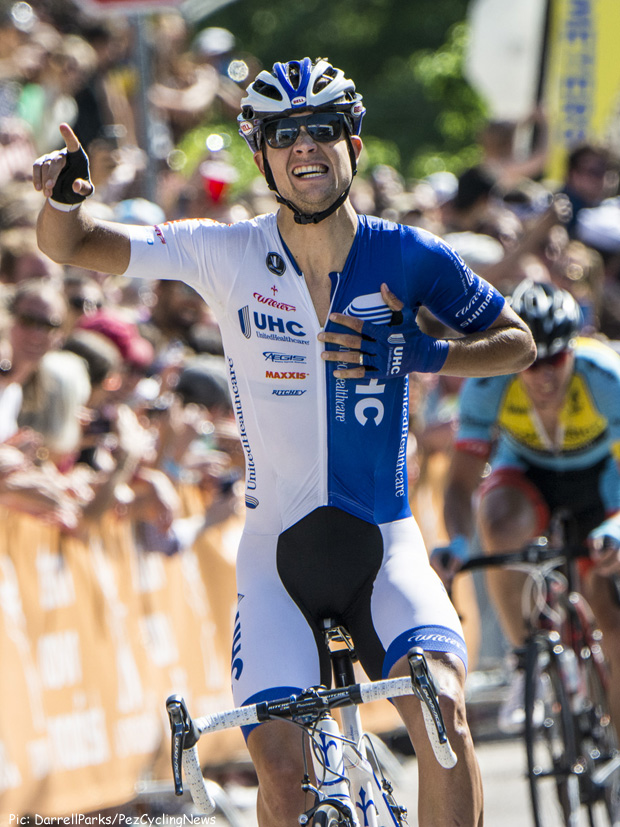 The long telephoto worked well for the finish shot shown here. Just after this Kiel continued raising his hand above his head and extending 2 fingers towards the sky for his second victory at Philly. I missed getting that “better” finish shot since my extra long telephoto lens ended up cutting off those fingers! You can’t make the right decision all the time but I guess that’s racing… Congratulations to Kiel for doubling up in Philly!

One for All and All for One