The queen stage of the 2013 Tour of Azerbaijan lived up to its billing providing the most dramatic moments of the race. With a 22km, 1200m climb to the finish, this was a day for the overall contenders and the mountain men to shine.

The 115km route featured three KOMs, the first two while only 4-5km long averaged 12%. A break of eight riders escaped the field at the 25km mark with their lead was hovering around the 1-2 minute mark. On the second KOM, Leopard-Trek rider Jan Hirt made an impressive solo bridge to the breakaway. Hirt’s Leopard-Trek teammate Sean De Bie then drove the breakaway opening a further gap on the peloton and setting the stage for the events that would transpire on the final climb. 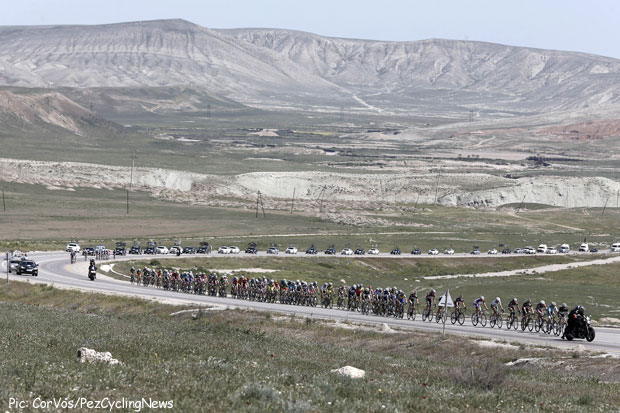 With 10km to go it was down to three riders when Hirt exploded off the front. “We had three guys on the climb, but I felt we were going too slow to stay away so I had to attack. Also, I wanted to go alone because in the finish, in the sprint, I think I don’t have to much possibility to win the sprint,” said Hirt. 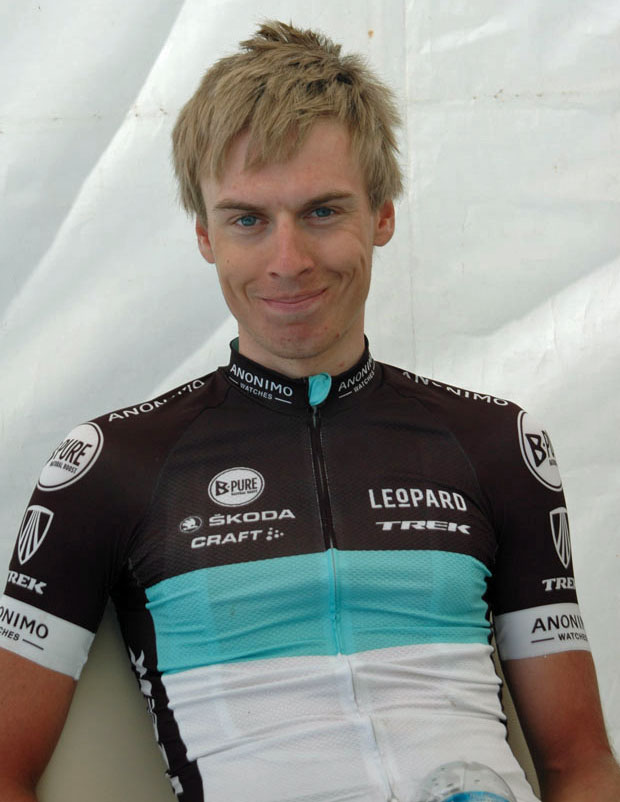 Jan Hirt, a rider to watch for the future.

At the finish, he had opened a four minute gap. It was an impressive win to say the least. “I felt really good. I made one mistake on the second day when I stayed in the peloton and didn’t go in the breakaway and I lost 10 minutes. So, for me the overall classification was finished after the second stage. So I needed to win one stage,” added Hirt. 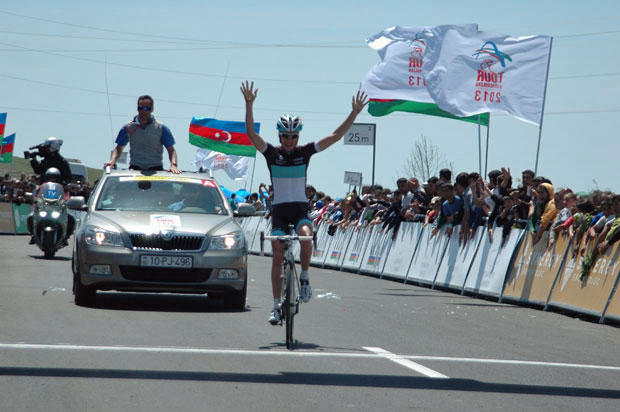 Second across the line was Synergy Baku Cycling Project rider Conner McConvey. He kept the teams amazing streak of podium finishes, now four in four days, alive. McConvey describes the events on the final climb. “It was a war of attrition at the end. He[Hirt] was really strong because he came across [to the breakaway] alone. Normally when you are second you have a hint of disappointment, but this guy was so f*cking strong it was impossible to get near him. I feel good. I couldn’t get anywhere near him. I turned myself inside out and got second.”

There is a single American rider participating in the 2013 Tour de Azerbaijan. 27-year old Calixto Bello is a member of the Start-Trigon Cycling Team. The squad is registered in Paraguay as UCI Pro Continental just one level below the top teams in the sport. 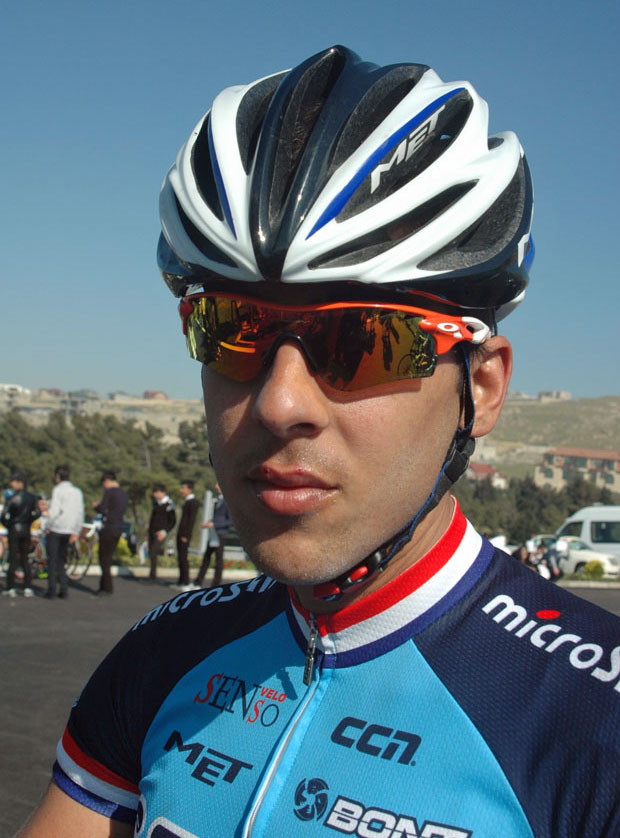 Not the only American on the Tour, but certainly the only one actually riding – Calixto Bello.

Bello’s path to a place on the team is a familiar one. “I raced with this team a few years ago and then they became a [Pro] Continental team. I know them from Argentina because I have also raced in Argentina, Brazil, South America. I met them down there and the next thing you know they gave me the opportunity to come to Europe. Two years later I am here with them again.”

Pro Continental teams need to work hard to get invites to the bigger and better races. That means a lot of road miles both on and off the bike. “We have been doing a lot of races this year and traveling a lot. Getting to Azerbaijan has been tiring, but we are managing it. In a matter of three weeks we have done a lot of racing and traveling.”

Bello grew up in Miami which is not necessarily known as a cycling mecca. “It’s tough. We only have one place to train. That’s Key Biscane. But, there are a lot of good people coming out of there like Andrew Talansky and Thomas Gibbons who is racing in Belgium and U23 National Champion Miguel Byron, Jr. It’s tough, but when you want to do it. You do It.” 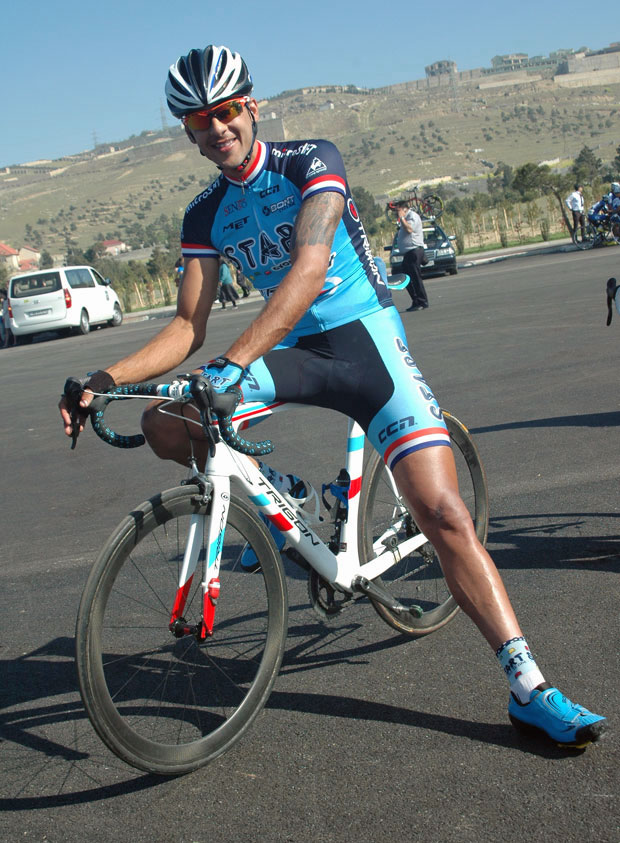 What is Bello’s impression of Azerbaijan? “I was very impressed when I saw the city (Baku). It is one of the most impressive cities I have seen. The architecture competes with some of the oldest cities in Eurasia and they have only done it in the last 10 years.”

The life of a journeyman pro has its ups and downs. “I love racing bikes. When things start flowing a bit better for me I look to get on a bigger team with a better budget. It’s been kind of tough. The last couple of days I have been working on my bike gluing on tubulars, putting my wheel together because it is not working properly.”

“It is tough to compete with riders who are traveling by airplane and on top of that get everything done for them. All they have to do is eat and ride But, it is worth it. When opportunity comes we are there,” adds Bello.