Giro’14 St.21 Race Report: With all eyes on Nacer Bouhanni (FDJ.fr) to take the stage win, it was yet another fast man from Giant-Shimano, Luka Mezgec who showed them all how to do it, while Columbia’s Nairo Quintana won his first Grand Tour.

The undoubted champion of this race though was the main man from Colombia, Nairo Quintana (Movistar) who has shown great composure and grit to take one of the hardest editions of the Giro d’Italia in recent years. His family was there in Trieste to see him crowned the victor in a city that seemed to be full of Colombians, so dominant have they been in this race. His compatriot Rigoberto Uran took second overall with the young Fabio Aru (Astana) taking third.

And so the first Grand Tour of 2014 draws to a close, and it hasn’t disappointed! We’ve had rain, snow, sun, crashes, attacks, confusion, recriminations and a winner leading from the front. We started in a country that often struggles between green and red, white and blue but, for the best part of a week, turned completely pink. And not even the rain could dampen the enthusiasm of the Irish crowds.

We’ve seen leaders like Joaquim Rodríguez (Katusha) crash out, a rider return from the wilderness in the form of Michael Rogers (Tinkoff-Saxo) and a new name come to the world stage in Fabio Aru (Astana). But the man that had the measure of them all has been Nairo Alexander Quintana Rojas (Movistar) and despite controversy and confusion at the summit of the Stelvio he has gone on to show them all how to act like a true Maglia Rosa. And the best young rider in to the bargain! 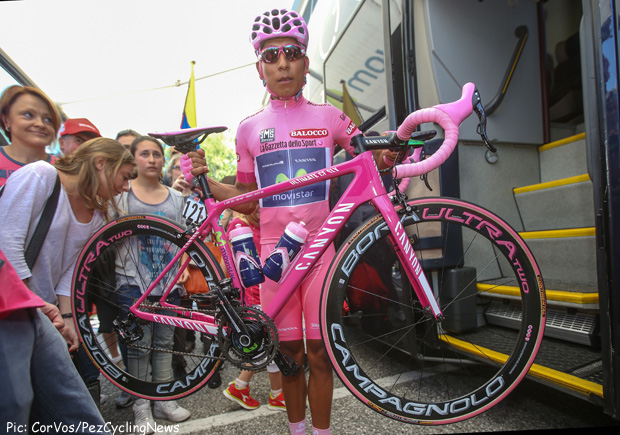 Nairo Quintana really went all out with the pink theme today…

Today’s stage into Trieste was the icing on the cake and one to be savored by the Giro winner but the racing wasn’t finished yet. Colombia may have wrapped up three of the four jersey competitions, Arredondo (Trek Factory Racing) having secured the KOM prize, but it was all to play for in the sprint contest with Nacer Bouhanni (FDJ.fr) being the big favorite for today. Here’s how it played out.

An easy profile for the last day

Easy Riding in the Sun
Understandably, it was a very relaxed start to the day with riders enjoying the sunshine and posing for cameras. It took about 30 km of easy riding before we saw our first attack of the day with one half of the entire surviving Orica GreenEdge team going up the road. Svein Tuft is only one of two riders from the Australian team to go the distance in this Giro and he quickly gained over a minute in the company of Martin Tjallingii (Belkin) but 30 km later it was all back together as the race headed for the finishing circuit in Trieste.

Movistar was keeping everything together to make sure that their leader received his due praise as the race headed into Trieste. With the intermediate sprint, and its very important points, not coming until the 5th passage of the finishing circuit, the riders were biding their time, allowing the photo motos to get lots of pictures.

Honor Given, then Racing Starts
As the peloton came onto the finishing circuit Movistar took the lead and was allowed to head the race for a complete lap, showing off their new champion-to-be. Up the small climb and then down the steep descent, around the double left-hander 800 meters from the line and through again. With the sprint coming in a couple of laps time though, eventually something had to give and once again the attack came from Svein Tuft, this time joined by Lars Bak (Lotto-Belisol).

The duo began to eek out a gap of 45 seconds but the overall pace of the race had increased dramatically as the fast men were paying attention to the upcoming intermediate sprint.

One lap before the sprint, each of the sprint teams moved to the front to get a look at how they might manage it. Sky was there with Philip Deignan looking after Ben Swift but all eyes were still on Bouhanni. The Movistar controlled peloton was holding the breakaways to around 40 seconds.

Clever Sprinter
With Lars Bak riding through the sprint line ahead of his breakaway companion Svein Tuft, all of the attention was on who would take third spot, and the valuable points that went with it. Would Bouhanni sit back and conserve his energy for the finish or would he contest the intermediate with Nizzolo (Trek Factory Racing) looking to pick up points?

In the end he did neither with the Frenchman jumping out of the peloton before the final corner and mopping up the remaining intermediate points in the red jersey competition. Now it would come down to the finish but even if Nizzolo won the stage, Bouhanni would need to finish well down the field to lose the jersey. Now it would be all about who wanted the win, and the glory that goes with it.

With the injection in pace, the leading pair was now only just off the front of the flying bunch.

Ramp Attack
With just over 17 km to the finish, Cannondale and Sky were on the front of the bunch and an attack came on the uphill from Bardiani-CSF. Two became five as the leading pair was caught by Stefano Pirazzi (Bardiani-CSF), Mikel Landa Meana (Astana) and Carlos Quintero for Colombia.

Basso (Cannondale) was working on the front of the bunch for Viviani (Cannondale) as was the whole of Team Sky for their man, Swift. Paolini (Katusha) was also thinking about a late attack, possibly on the final ascent but they were going to have to pull back the escapees who had a gap of 40 seconds. This came in no time at all as the bunch ramped up the pace and the leaders were caught. Tuft had been in the lead but was now at the back of the main peloton having used up everything he had.

With 10 km to go, and just over one full lap left, the bunch was flying with Bardiani animating the very front but covered by Cataldo of Sky.

Bell Lap
Bongiorno (Bardiani-CSF) attacked just before the line but the speed of the bunch was so high, there was no way he could get away. As they came over the line it was all together and everything to play for as the riders could smell the finish of the first Grand Tour of the year.

Riders were trying to fire off the front but the speed was so high that nobody could get more than a few seconds. Sky, Trek and Cannondale were pushing the race to the finish and with the bunch hitting the ramp for the last time the sprinters were trying to hold their position.

Flying down the hill, Daniel Oss (BMC) was hanging off the front and may have timed it perfectly as the teams began to look at each other. Oss had a slim lead but with 1500 meters to go it would be a big ask.

Final KM
It was too much for Oss and he was caught and the bunch was strung out as it surged towards the finish. It looked as if FDJ.fr had timed it perfectly as they led Bouhanni towards the line but in the final dash it was Luka Mezgec (Giant-Shimano) who gave it everything and took a fabulous win in front of the crowd in Trieste. 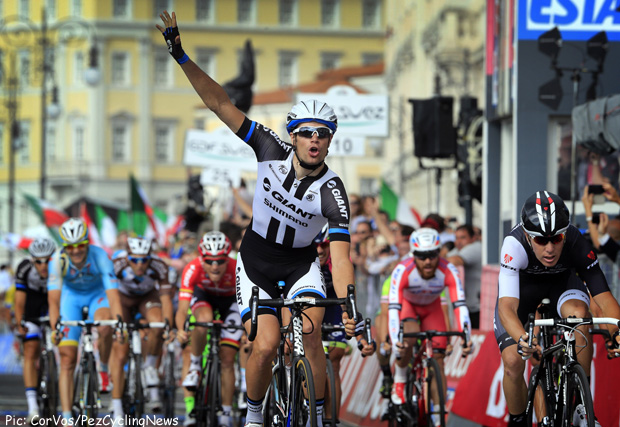 The sprinters were spread across the road and second spot went to Nizzolo just ahead of Tyler Farrar (Garmin-Sharp) and Bouhanni but the happiest man was Nairo Quintana as he thumped the air coming across the line.

The rain had held off just long enough to see the race finish but the heavens then opened as Quintana waited to be crowned King of the Giro 2014.

Astana BePink race in Northern Europe and the USA