In the realm of high-end bicycles, the name Colnago rings to the ear a lot like Maserati, or Armani, or Fabriano. Try reading those aloud. Fabriano. What is it about so many Italian brand names that they manage to conjure respect and admiration, if not outright lust, especially from non-Italians? Maybe it’s the natural musicality of the language itself that conveys a sense of romance. Maybe it’s the Italians’ reputation for doing everything with passione. That last one, Fabriano, is actually a paper manufacturer, but I’d bet money that it’s some damn sexy paper. 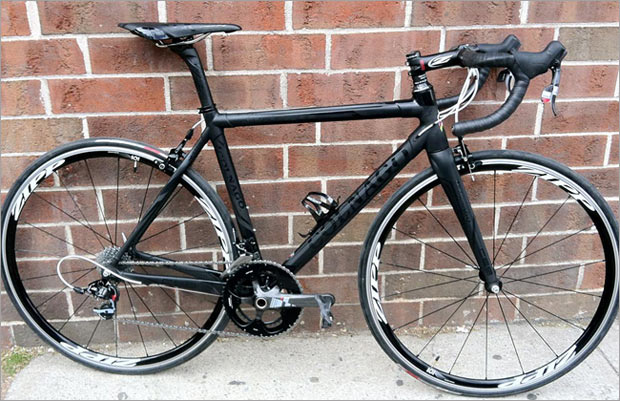 That reputation is often well-deserved, however, and Colnago’s is no exception. Ernesto Colnago started tooling around on bikes when he was thirteen years old, and today, his company – which he still runs and is still entirely family-owned – is Italy’s largest frame producer, which is saying a lot for a country with over 50 registered bicycle brands and a ferocious dedication to the sport.

The History
Arcing back to 1954, the firm’s always maintained Ernesto’s incredibly high standards in every aspect of frame production, from materials, to engineering, to aesthetics, to that particularly satisfying Colnago ride quality that so many seasoned riders can tell you about. The C59 Italia I rode for this review is the latest and greatest demonstration of what happens when Colnago’s traditions meet today’s technology, and the results are, in a word, straordinario.

This C59 Italia (yes, “Italia” is part of the model’s name, but from here on I’ll just call it the C59) was made in Ernesto’s basement. They all are. This is because the Colnagos built their family compound above company’s manufacturing facility at their headquarters in Cambiago, near Milan. The factory is walking distance from the small shop where Ernesto brazed his first steel frames as a teenager, and yes, the company’s original steel Master frameset is still handmade here, too. The frames are shipped to Tuscany for painting, however. Why? “Because that’s where the artists are”, says Colnago. 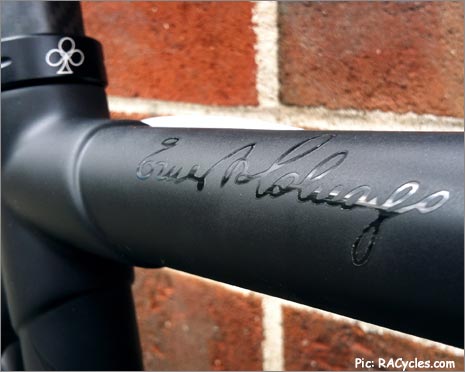 In addition to enough stock sizes so suit almost anyone, the bike is also offered in seven stock color combos, including matte black.

The quality, the name, and the birthplace are about all the C59 shares with its spiritual predecessors of the 50s and 60s, however. Today, Colnago utilizes very advanced construction techniques, and is relatively tight-lipped about doing so, for fear that they may alienate some of their customers who still romantically view it as an old-world brand employing old-world manufacturing methods. For those who believe ignorance is bliss, read no further.

The Build
Colnago sources its raw carbon from Japanese manufacturer Toray, claiming it is the world’s best for bicycle production. After preparation, the carbon is laid into stainless steel molds – not typical alloy ones, says Colnago, because the pressures required by their proprietary molding process are so high that they were deforming the alloy molds they tried initially. Once the tubes are formed, the C59 utilizes carbon lugs to bind them together, making Colnago one of the few major manufacturers still using lugged construction. This is because lugs provide not only exceptional strength and stiffness, but at up to 4.8mm thick in some sections, they also have tremendous vibration-dampening qualities, creating a smoother ride. The use of lugs also simplifies the factory’s process of creating custom frame geometry alongside the 22 stock sizes in which you can purchase a C59. 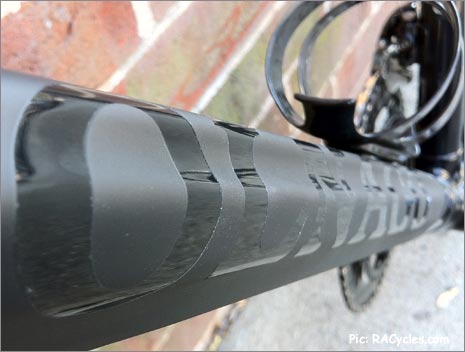 The beefy downtube is the Colnago’s classic clover-leaf shape, which does more than just look good – it adds to the bottom end stiffness.

Colnago created and tested over 40 prototypes of the C59 before finally pinning down the production version you see here, but their innovation wasn’t exhausted in sheer refinement. The headset, for example, is seated into aluminum cups that are pressed into the head tube, the idea that they can be replaced should they ovalize, without compromising the frame. There’s also a 6mm gap between the outermost edges of the cups and the frame itself, which acts as a sort of “bumper”, should you take a severe frontal impact – the steerer tube may shift the cups, but it won’t break the fork or the head tube. Either way, the C59’s fork is double-walled, to reinforce stiffness and also act as a failsafe against crashes or impacts, so you can hopefully still ride home even if you tango with the tarmac or if your C59 gets in a fight with another bike.

None of these details means much if the frame doesn’t deliver that famous Colnago riding experience, and of the C59, even Ernesto himself calls it perhaps the purest manifestation of the way he believes a bicycle should ride. 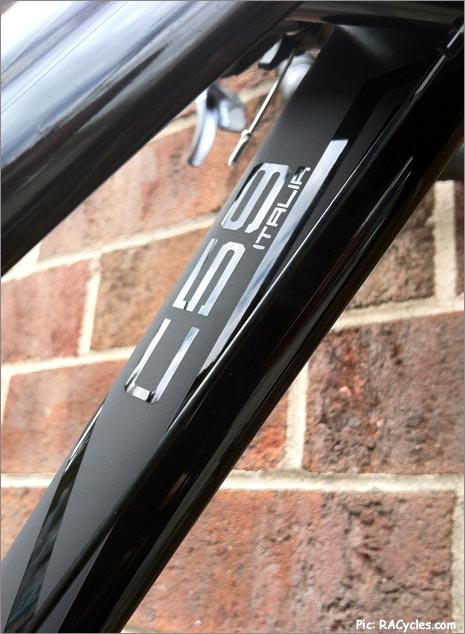 You can see the fork’s double-walls at the trailing edge of the fork blades.

Hopping on the C59, before I was even rolling, it did indeed feel unique. There’s a feeling of being high off the ground, but not in a precarious way. It’s a commanding position that breeds a sense of control and awareness of your surroundings. Chart checkers will notice that top tube and head tube lengths, at 535mm and 133mm, respectively, are proportionally average for this size range, but let me save you some time: you will not find head tube angles or bottom bracket heights for the C59, because Colnago doesn’t publish these figures for any of their bikes. Ernesto claims them as ‘proprietary’, and so adds to the cache of the ride quality the brand is often noted for. 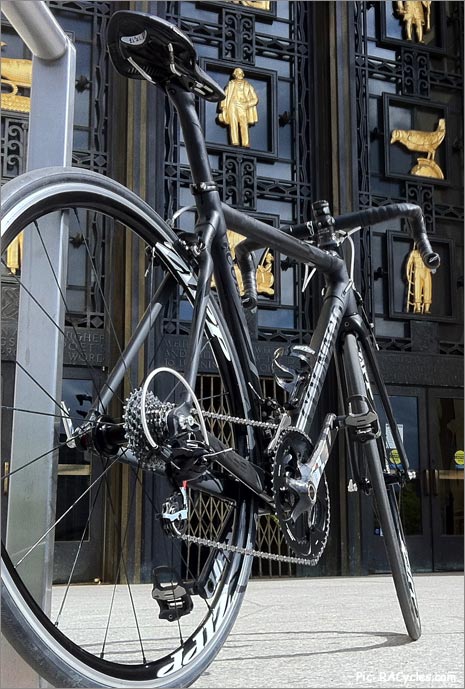 The Ride
My first ride on the C59 gave me an early sample of one of the C59’s stronger flavors: this is not a bike that wants to charge all day on the flats. Indeed, it could, but it’s clear that that’s not what Ernesto had in mind, and the lack of clear aerodynamic concessions on the C59 supports this. Whereas some bikes encourage you to hunker down and chug along like a train, I quickly grew tired of this type of riding on the C59. It’s when the road turns, however – whether up or down, left or right – that she really starts to dance. 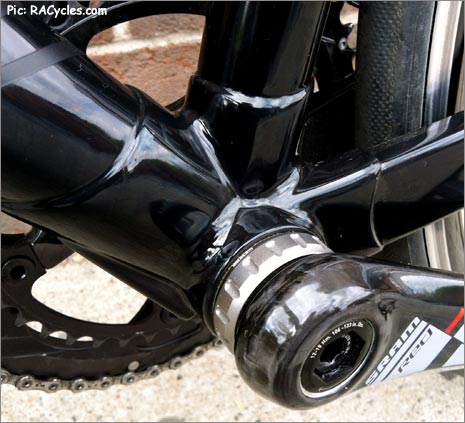 The C59 is very reactive to input from the crank, felt especially when popping off a sprint or charging uphill. This is one of those bikes that loves to crank hard and will make you love to, too. The extra rigid bottom bracket and front end work in concert to create a frame that throws itself in any direction you point it. Colnago calls their monocoque M10 the brand’s lateral stiffness champ, but the C59 is certainly among the stiffer bikes on the market, with just a touch of spring that makes climbing or sprinting aboard one a blast that doesn’t get old.

If there’s one particular aspect of the C59’s performance on which Ernesto can hang his storied hat, however, it’s this bike’s remarkable handling. Diving into a turn, settling into a lean, popping back out and into the next – the C59 begs for it, all day. The bike feels light on its feet in a sense that epitomizes the way one expects an Italian bike to handle. Some bikes make their home at a certain apex or a certain lean – but the C59 is dial-o-matic, never feeling as though it has a sweet spot, instead treating any curve itself like the sweet spot. It’s an amazing experience. 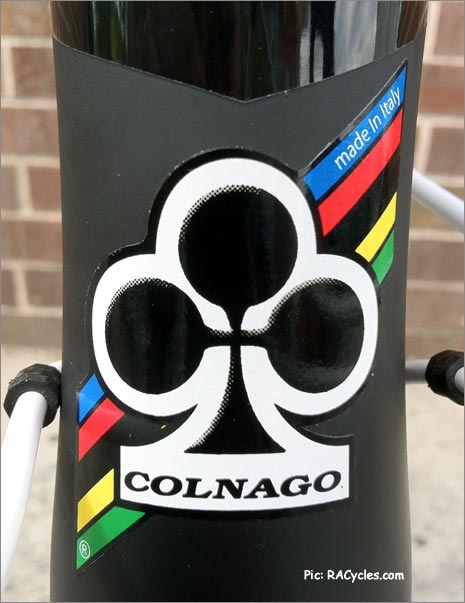 So yes, the C59 will dissect the pack on the Tuesday night crit, and still have the muscle for the finish line sprint, but lest you think this is a machine only for such purposes, the C59 still surprised me: the bike’s ride quality was supreme. There may be smoother bikes out there, but very few. The package is balanced out by astoundingly good high-speed stability for such an agile machine. The C59 could get you on a podium Tuesday and glide you through that century on Sunday. Its flexibility is a luxury in itself.

Dropping in at $5,899 for the frame, fork, headset, and seatpost, the C59 is subject to scrutiny that it can handle. Its performance is supplemented by gorgeous, flawless construction and paint work that should stand for years, as evidenced by the number of pristine high-mileage examples you can still find rolling the roads. 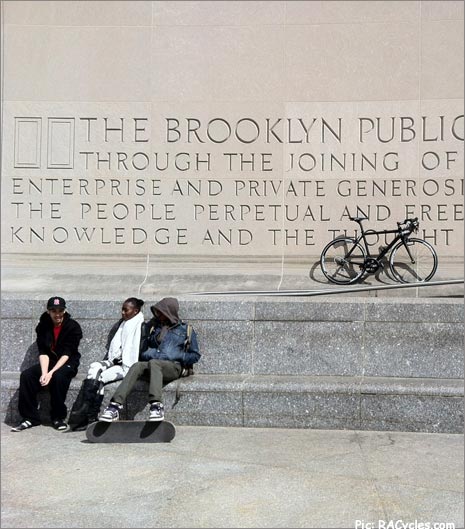 For pounding over the flats all day, I’d recommend looking elsewhere, but for those seeking truly beautiful handling, the 2012 Colnago C59 Italia would be either at or towards the top of my list. The smooth ride quality and excellent stability at higher speeds don’t hurt its case, either. Magnifico.

– Words and Pictures for this review by Caffery Garff –

ABOUT R&A’s FRAME TESTING
Some folks might raise an eyebrow at the idea of a bike shop writing reviews on its own bikes. Of course, we would love to sell you a bike, but we also want to sell you the right one. At R&A, we have an enormous number of models from which to choose – in fact, with 26 brands represented, it’s the largest selection in the world. We decided to start reviewing our own bikes and other products with the hope of pointing readers in the right direction and helping them make more informed decisions, because we love the bikes we sell, and we want everyone to love the bikes they buy – even if it’s not from us.

To ensure consistency and fairness, each frame R&A tests is built and run with the exact same parts kit and setup, top to bottom, from the bar tape to the tire pressure, unless otherwise noted. Full specs of the R&A test build are provided below. Cockpit dimensions are replicated as closely as possible from bike to bike. Some manufacturers offer fully integrated frame systems, in which case we use the frames’ included parts where possible. All test riding is done in and around the New York City metropolitan area.

Generally, our bike reviews will not discuss weight figures. Frame weights are published on our website and others, however, different measuring standards make these numbers an area of ambiguity. Further, the framesets we test here are more than likely to be custom built when purchased, so frame and bike weight will vary from build to build. We can promise that all of the frames we test are very light!

R&A approached SRAM and affiliate ZIPP to provide parts for frame testing. Their exceptionally high quality, performance, and durability means we can focus entirely on the frames and their ride characteristics without worrying about the performance ceiling or reliability of any components. Visit www.sram.com and www.zipp.com to learn more about why we chose to work with them.

R&A Cycles is based in Brooklyn, New York, and ships products around the globe every day. Please visit www.RACYCLES.com or e-mail [email protected] for general inquiries.