Flanders-iteamNova.com and PCN have teamed up to provide an official “insider’s” view the Tour de Langkaw! Since I’m the rider personally selected to do the diary, so I thought it best to introduce myself first.

I’m Allan Iacuone an Australian professional cyclist with years of expierence. My biggest claim to fame is being Australian Champion in 1994 and coming 3th on GC in The Tour de Langkawi in 1999, After a good year 2000 with the Linda McCartney team I was getting ready for another big year in 2001, but you all know what happened. I was disappointed with the professional cycling world and decided to end my career. 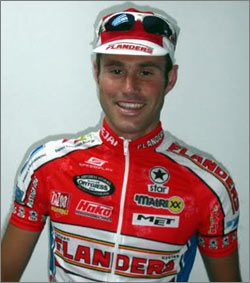 Al Iacuone reacts to the news that he’ll be the PEZ-man inside Langkawi. I’d say “stunned disbelief” about sums it up… ed.

Then late 2001 my friend and LMC teammate David McKenzie came to talk with me and told about the big plans his wife had. So in traditional Aussie spirit we all went for it and the first publicly funded pro-team was born. IteamNova.com was great idea but didn’t live up to it’s full potential in the first year. We had a lot of members that gave us enormous support but we would have liked to have more members to secure a better future.

This year we have combined with the Belgian Flanders team to become a Div. 2 team. Which means we’ll be able to start in bigger races, get more publicity and thus more members. And that’s what it’s all about. The members finance the team so more members will let the team grow again next year. And not least they will send us even more encouragement via the team website.

I’ll turn 30 this year and so do a lot of teammates from last year’s iteamNova team. We all know this will be our year of the truth. Can we make it big time in Europe and gain the support we need or are we among the riders that keep knocking on the door? This year we will prove we’ve got the talent, will and ability to make it.

But let’s get back to the Tour de Langkawi. I arrived in Langkawi yesterday and I think I’m in good condition after a six week build up towards to Australian National Championships and a week of rest before coming out here. I’ve done this race three times and I go well in it. I like racing in the heat because my body copes with it very well and I like the course, not too much time trailing and some good climbs.

With the experience and the previous good results combined with my good form I think I should be in with a chance on GC. Provided we don’t make the same mistake we made last year when our 2 GC riders were caught in the back of the bunch when it split up in the crosswinds.

I hope you’ve got a good idea of who I am and will enjoy my dairy in the days to follow. I hope you will all support me like our members do, so that I can get some good reports from the front end of the bunch to you.

Team Press Release:
Flanders-iteamNova.com will be well prepared to go into action at the Tour de Langkawi. A well-balanced team will be ready for every challenge. With David McKenzie and Ronny Assez, Making his return after a lengthy injury, there are a couple of fast guys who can go for stage honours.
Allan Iacuone will be going for GC; he is a good climber that came 3rd in this race back in 1999. Trent Wilson, the winner of the KOM at last years Herald Sun Tour, will flank him.
The full line-up for Flanders-iteamNova.com will be:
Ronny Assez, Belgium
Jamie Drew, Australia
Scott Guyton, New Zealand
Allan Iacuone, Australia
Jurgen Landrie, Belgium
David McKenzie, Australia
Trent Wilson, Australia