A Readers’ Rig could be anything from a modern classic to a vintage steely, a lightweight carbon or more – but why not all of the above? Canadian PEZ fan, Jim has 4 bikes that easily qualify as Readers’ Rigs so we decided to feature all four – a Trek 5200, a Colnago C50, a 1988 Marinoni Special and a Guru Photon.

What made you choose these bikes?
1. Trek 5200 I bought the Trek in 2001. It was my first new road bike since I had a Marinoni built for me in 1977. I hadn’t done much road riding since the 80s. My first venture out on the old machine on the hills of the North Shore in Vancouver made me acutely aware that I didn’t have the legs to push the massive gears up the hills. I decided I better look for something new. I tested several bikes and ended up buying the Trek from a shop in Whistler, BC. They were clearing out their cycling stock to make room for ski equipment and made me an offer I couldn’t refuse. Quite a change from the old Marinoni! 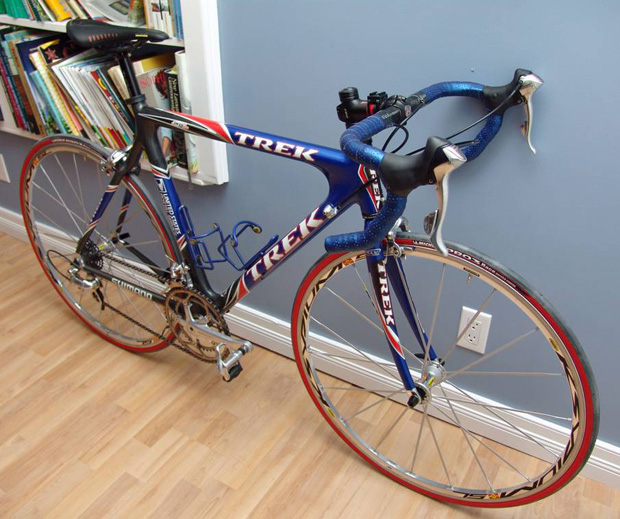 2. Colnago C50 I’d read many articles about the Colnago (including a comparison test between a C40 and C50 on Pez Cycling). I first saw one in the flesh in a bike shop in Bergerac, France in 2004. When I was there it was called Cycles Seurin. The owner, Marcel Seurin, was a professional rider in the sixties and later a team mechanic before he set up shop in Bergerac. The C50 was built with Dura Ace components which I thought strange in Europe. I asked why he hadn’t used Campy and his response was “Superieur, monsieur!” When I asked the price, he said “Trop cher!” I left with the image of that bike burned on my brain.

I turned 50 in 2005. I started thinking about a new bike. I always thought that the Trek was a bit big for me. What better choice than a C50 for when I could “see 50”! I went to a bike shop in Vancouver that I knew carried Italian brands and asked if they could get me a C50 . They told me they had one in their basement that was ordered for a customer. I asked if I could have a look at it . The response: “No”. Hmmmm……. I asked if they could order one and build it with Dura Ace. The response : “It would be sacrilege to put Shimano on an Italian bike.” I departed the scene.

At the time there was only one bike dealer in Vancouver that stocked Campy components . I had just left it. All the others carried Shimano. My opinion on selecting Shimano and not Campy was cast in stone from that point onward. After much searching I ended up buying the bike from Wrench Science in California . They gave me great service. We had multiple calls about fit and components before I finalized the order. My wife thoroughly enjoyed taking all the necessary measurements – particularly measuring from crotch to floor with a spirit level and plumb bob. I remember when I unboxed the bike and went for a test spin. She felt good. She looked even better! I named her Sophia… 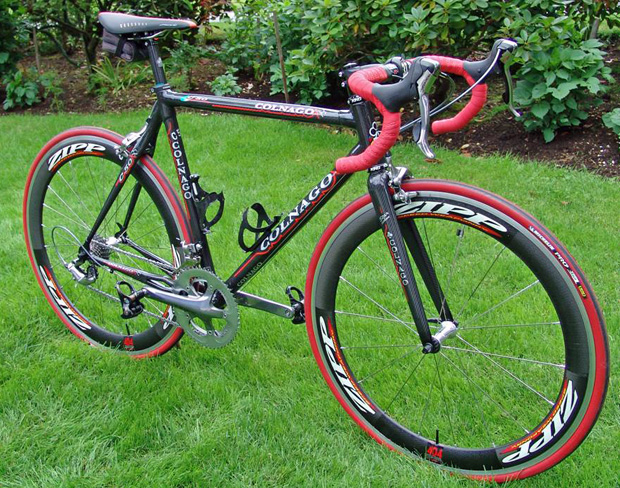 Sophia in her original clothing… 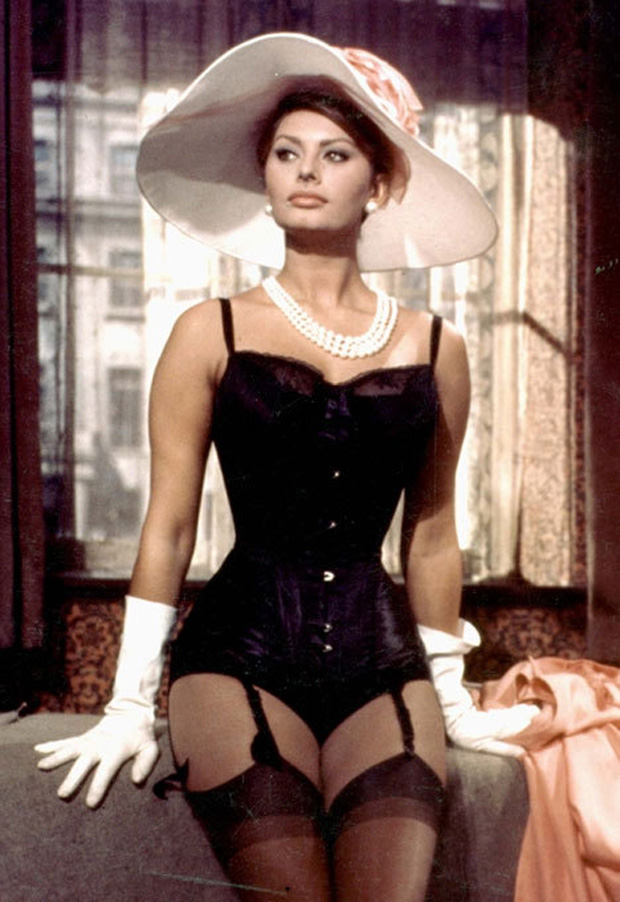 and the original Sophia!

The first ride was in Washington state from Fairhaven down the Chuckanut Drive to LaConner and back. It was about 120k and she was perfection! Fast, responsive and comfortable. The old gal gives me the same sensations almost 10 years later.

3. 1988 Marinoni Special In the past few years my interest in vintage bikes has piqued. I am intrigued by L’Eroica. I started regretting selling my old Marinoni and went on a hunt for one. I found one that had the right geometry owned by a guy in Ottawa. I bought it, stripped it, sent it to Marinoni for fresh paint and restored it to comply with the rules for L’Eroica.

The before and after shots of Jim’s ‘new’ Marinoni 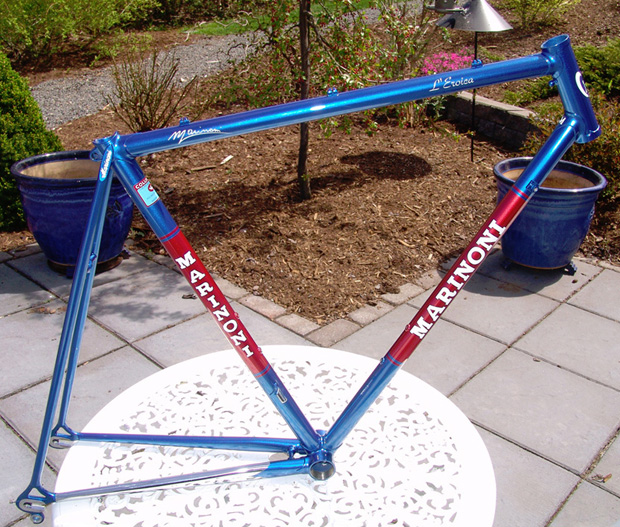 Here’s the frame the day it arrived back from Marinoni complete with ” L’Eroica” on the top tube as Jim requested.

The paint job exceeded my expectations. One of the great finds for the project was made in the basement of the local bike shop where I live. In a dust covered box were a pair of unused Diamant shoes that fit like a glove! The plan is to take the bike to Italy for L’Eroica in 2015 when I “C 60” and don’t have to enter the lottery for an entry. 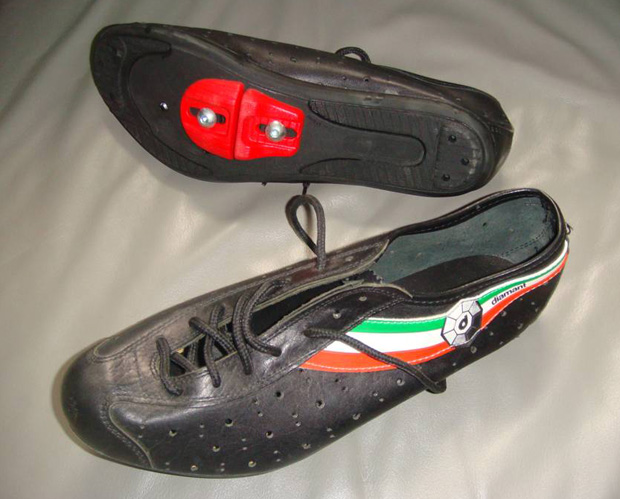 The bike is fun to ride. It’s heavy but is smooth as butter on the rough stuff. It sure gets attention from other riders when they see me reaching for the shifters. They do double-takes when they see me reach down to unstrap the shoes. Thankfully I hadn’t completely forgotten the skills needed to pilot the bike. I did catch myself pushing on the sides of the brake levers a few times in search of gears though…

4. Guru Photon This was a bit of an impulse purchase. A very good friend of mine bought a Guru last year. I remembered their bikes as being big with the triathletes. I was curious so checked out the Guru scene online. Lots of rave reviews about the Photon. When I went to their website the first thing I saw was a factory sale! To make a longish story short I bought a frame, fork and 2013 SRAM Red 10 “demo” groupset . The price for all was almost 2 grand less than the price of the current frame.

I added a set of HED Ardennes wheels which were reduced by 50%. The Thompson Masterpiece post and Arione carbon saddle were on the Trek. I added a Thompson X2 stem and KFC carbon cross bar. The bar choice is indicative of the fact that I spend most of the time on the hoods and wanted a shallow drop. Comfort over speed. The pedals are Dura Ace 9000. Weight of the bike as built with pedals and cages is 14 lbs 10 ounces (6.64kgs). 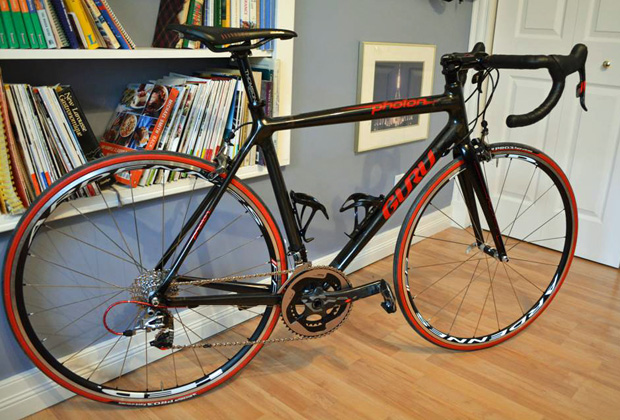 I have only ridden the bike once as a result of the coldest winter in Eastern Canada in 25 years but the initial impressions are good. It is very light compared with the rest of the fleet. It climbs easily and seems stable in the turns and on the two descents I did on the ride. Both were cautious given my age and the presence of cracks and potholes on our roads. The idea of falling is not attractive as I near 60. As a friend of mine said, we no longer “bounce”!

What modifications/additions have you done to them?
Trek: I swapped the original Ultegra triple groupset for a pristine used Dura Ace 9 speed groupset. It transformed the bike from a pig to a very nice ride. I couldn’t believe the difference. The original saddle and post were replaced with Fizik Arione and Thomson Elite. The Bontrager wheels were replaced with Mavic Ksyrium SSC SLs which are still bombproof after more than a decade of riding. They have never even had to be trued.

Colnago C50: Two years ago I changed from original DA 7800 crankset to FSA Compact . The hills seem to get steeper every year! Last year I bought the FSA compact bars, stem and post. The back seems to get stiffer every year too…

I still use the Zipp 404s which I had at the time I bought it. They only get occasional use. The Mavics that I bought for the Trek did double duty until I purchased a used set of Mavic Ksyrium R-SYS wheels about 5 years ago. They are still the workhorse wheels and the only issue I’ve had is 2 spokes crack. One was in travel and the other was when I hit one of the moon sized craters that people around here refer to as potholes. 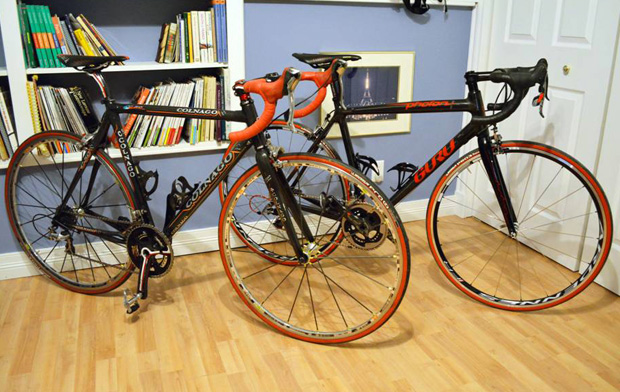 The Colnago with its Ksyriums on board sharing space with its new roomate, the Guru

What components are you running? Do you have a favorite?
From original Chorus / C Record on the Marinoni, Dura Ace 9 and 10 on the Trek and Colnago to 2013 SRAM Red on the Guru. My initial impression of the SRAM Red gruppo is that is seems good. The jury is out until I get some miles on it. I still like the shifting on the Dura Ace 9 and 10 speed series. Maybe because they are old reliable friends. 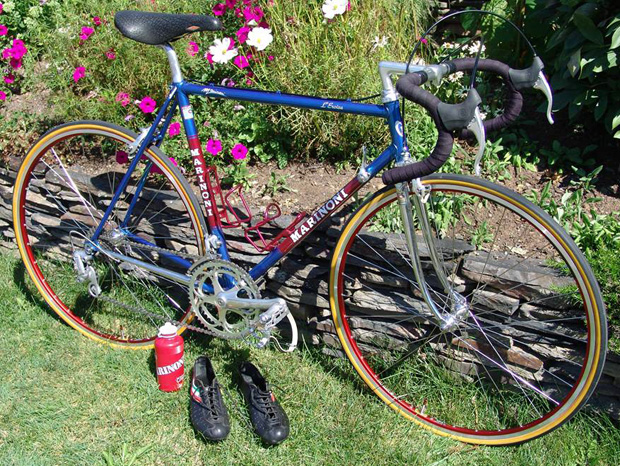 Chorus and C Record on the Marinoni – classic

How many miles/kilometers do you do a year?
Last year I did just over 6,000km on the road from the end of March until November on the Trek and Colnago. I don’t have any stats on the Marinoni as it would be sacrilege to use a Garmin on that machine!

Vancouver area – North Shore roads and mountains. Gran Fondo Whistler – a chance to ride without cars! Dawn patrol with my friends for loops of Stanley Park before work. Washington State – Chuckanut Drive and Skagit Valley; Mount Baker from Sumas and back is epic.

Nova Scotia – Annapolis Valley and Cabot Trail. France – Dordogne, Provence and Mt Ventoux. I even had my picture at the Tom Simpson memorial make it on Pelopics one time. I’ve never ridden in Italy or Spain so they are still on the must do list. 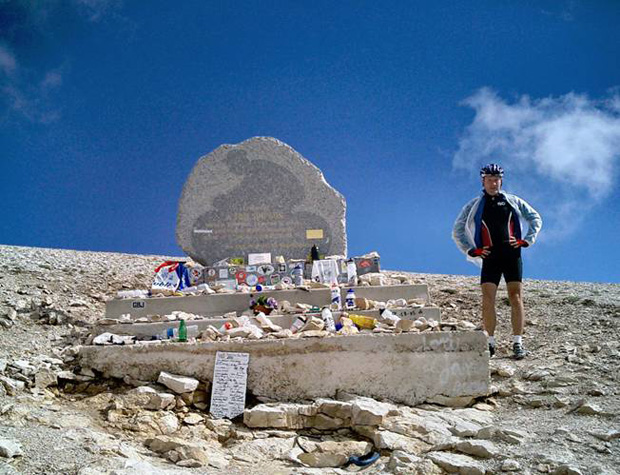 Future upgrades or purchases? I’d be killed if I even thought of it! 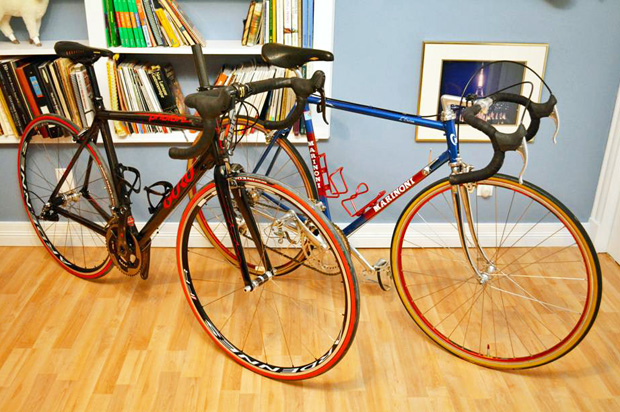 Come on Jim – there’s always space for another bike in the fleet!