Readers’ Rigs: Double Trouble Down Under!

We’ve featured some pretty special machines in Readers Rigs over the last year but today’s machine is something completely different again. It’s a custom built racing tandem owned by Peter Spencer a Cat 1 racer in Australia and his blind stoker Zachariah Clarkson.

Zac’s vision started to deteriorate at about age 6 and he lost most sight by age 8. He has an inherited disorder known as X-Linked Retinoschisis and and also experienced further complications including retinal detachment but this hasn’t stopped him from aiming high in a cycling career where he hopes to go to the next Paralympics in Rio in 2016. 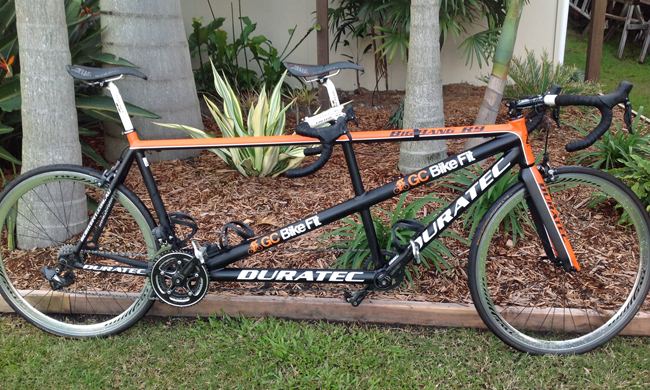 When did you buy it and what made you choose this bike? Peter: We bought it in April 2013. One of the bigger challenges on a tandem is the range of gears, Climbing you need as small as you can, but as soon as you are on a flat section or descending, you are looking for the 55×11. The Di2 allows you to run an unusual combo of rear, and front, (11/25 and 39×53) and have it shift seamlessly. Mechanical always struggles, especially under the pedaling load of the stoker, if he doesn’t pre-empt the shift.

As a long time fan of Aluminum bikes, and oversized tubing, the Duratec offered everything we wanted in a bike. In Tandem terms that doesn’t mean ‘as light as possible’, it means as strong & durable as possible. As a bike fitter, the custom geometry and sizing of the frame was paramount, because its not common to get a 185cm pilot AND stoker, it needed to be a very big bike, but still handle like a ‘single’ bike.

Wheels are their own topic, when it comes to tandems. I could go on and on, but the simple thing, is that we trust our specialist wheel builder, Greg @ TWE, and on a tandem, you need the absolute strongest wheels you can find. Double laminate rims, custom hole drilling, upgraded cassette body, high flange hub made from all 100% tough materials! And even then, you only just have a chance! 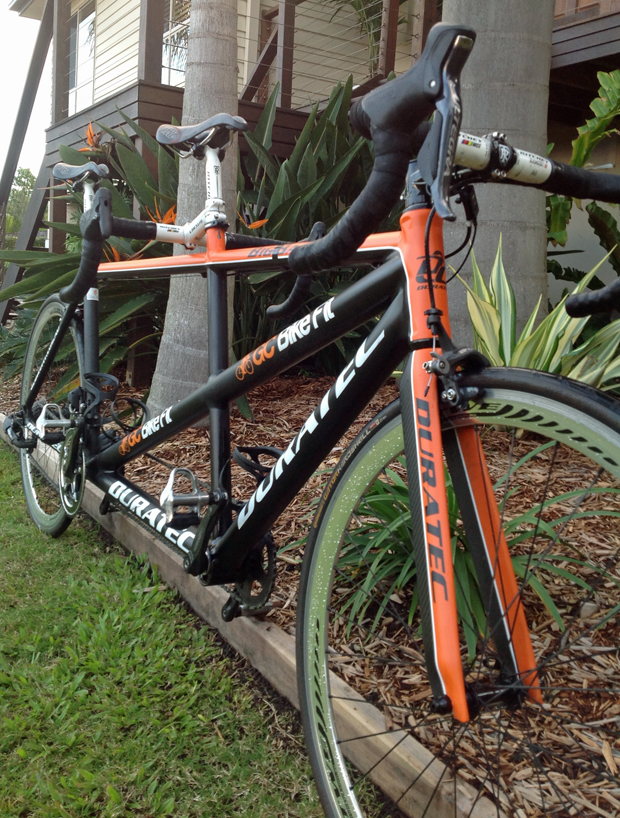 What modifications/ custom touches have you made? Zac: It is a completely custom build from the factory, every piece has been hand picked by Pete, for some reason or another.

How many kilometers do each of you do per year & how does it work for training? Always together or set tandem days and individual training in between? Zac: We do 400-600km per week on the tandem and I do 5 hours per week on the home trainer.

Pete, what are the challenges of riding a tandem in relation to a standard road bike? Logistics of training together is the greatest challenge. It is also harder on the body, especially in the hills. Imagine doing Strength Endurance training (big gears while climbing), and that is our EVERY kilometer. Climbing is twice as hard, and the strength component is something that takes some getting used to. You rarely push your Heart rate too high, instead driving higher torque. You also spend much more time ‘in the saddle’ because you lose the ability to get out as often as you do on a single bike. 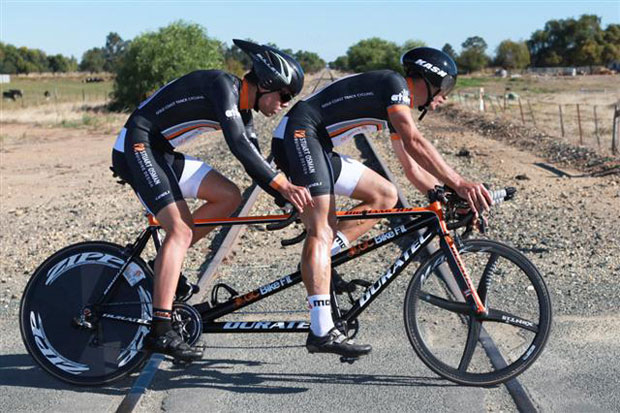 To get out of the saddle requires a little bit of communication to time it right, and when out of the saddle, you have to be completely still with your body and bike, or the stokers weight moves around like a keel. It is quite a knack, but when you get it right, you can really put some scary amounts of power out!

You also have to re-learn what your capacity is with cornering. Though you have twice the weight for traction, if you push the bike too hard in to the corner, the bike will keep ‘falling over’ in to it, and to bring it back upright can be really hard! A challenge for both of us, but more so Zac, is that when he moves, as he is the center of the bike, he moves the entire bike. If he moves on his saddle mid corner, the whole bike moves where it wants to go! In a controlled but out of control manner.

Kilometers on a tandem are worth 50% more than on your single bike, by feel. So a 100km ride on a tandem has you exhausted like a 150km ride on your own bike. It takes a bit of getting used to, that your normal rides, need to get adjusted for that.

Zac, what’s Pete like as a pilot? Any scary moments? We had a soft fall, thanks to a paint line/water combo. Pete fell really hard, and didn’t talk for a few seconds. It’s really scary when you can’t assess the damage, or surroundings (being blind) and the pilot isn’t talking either. Another time we also came so close to getting car doored that Pete had to stop to have a nervous spew! Going 110kph+ down off a local mountain in the Gold Coast Hinterland (pine creek road – springbrook goat track) is also pretty nervewracking!

How did the two of you get together? Zac: I met Pete while training with my previous pilot who, due to study commitments, was no longer able to invest enough time to ride. Pete had ridden a tandem before (Australian tandem pursuit champion) It was at this time that I asked Pete to pilot. He said yes, as long as it didn’t affect his family time, and that I was flexible and independent when necessary.

Zac, why did you decide to get into cycling? I was inspired to take up a sport after the Beijing Paralympics and chose cycling due to my parents past cycling experiences.

I know that the Rio Paralympics are a goal for you, what events are you hoping to compete in there? Pursuit (4km Time Trial) The current world record is 4.17 set by fellow Australian and friend Kieran Modra. It would be a lie if we didn’t say that we aspire to break a world record. It is common for the track endurance riders to also do the TT, and that would be great for us too. 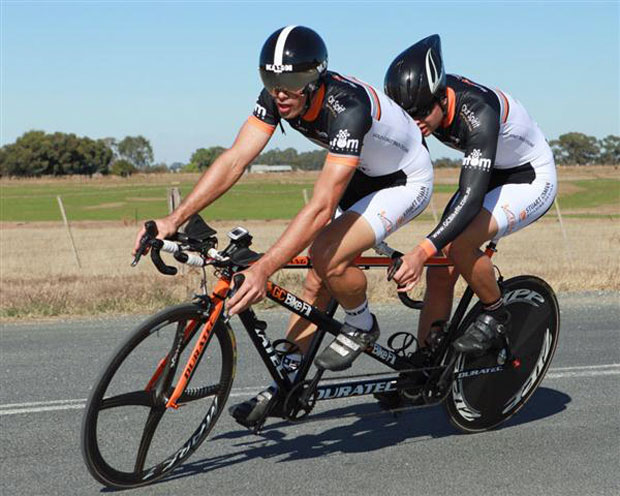 Competing in the time trial at the recent Australian Titles

I imagine that it’s very difficult trying to get sponsorship for your endeavors and yet recently you raised money not for yourselves but for another charity by completing a 250km ride. Can you tell us about that? Zac: Raising money for worthwhile causes like CareFlight (Emergency Services Helicopter) is a pleasure. We all have our ways giving back and if getting on my bike is how I can do it, it’s a bonus. It did come with the bonus of riding with absolute legends, like Troy Bayliss, Bryce Lindores (current tandem pursuit world champion) & Robbie McEwen 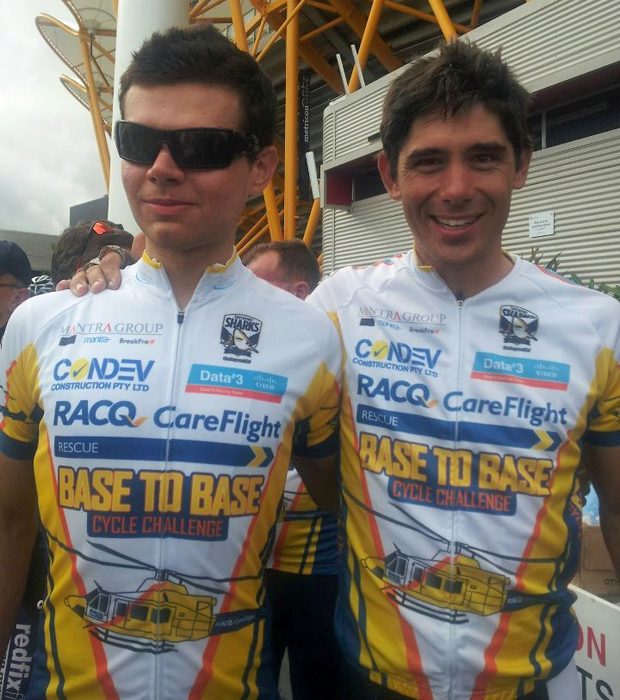 Favorite riding experience together? The ride we just mentioned, the CareFlight Base to Base Challenge. To start a 250km day, is always interesting, you just don’t know how well you are going to handle it! 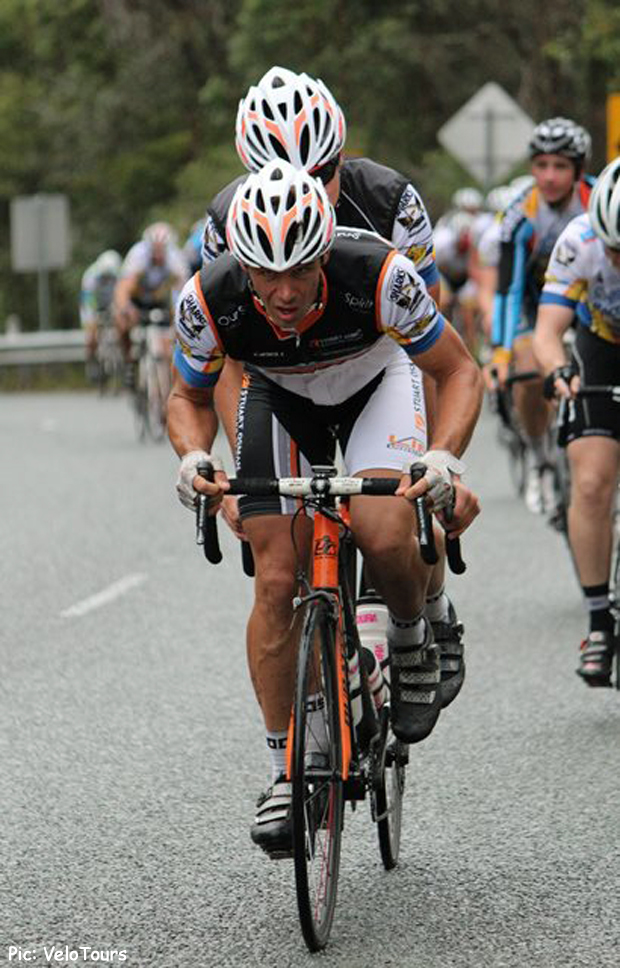 Halfway through the 250km charity ride, it’s pretty clear that Pete is having a good time here…..

Future upgrades or changes? A completely new bike is on the agenda! A DURATEC Experimental Tandem, frame designed without lateral tube, internal Di2 battery, Gates belt drive transfer system. Wheels will be TWE Custom with modified Chris King hubs. FSA Carbon Cranks, Ritchey carbon posts and stems. Thanks to my relationship with Duratec, they have allowed us to make some very particular requests for our next frame. Mainly thanks to the removal of the center tube (lateral tube) and the entire construction out of 70mm oversized tubing. We hope to create a frame that is as stiff as before, but lighter, and with more bidon cages!

The Frame needs to be a very special distance between bottom brackets to comply with the Gates Belt drive, and that is another very important inclusion on the new frame we have coming. FSA also make a designated tandem crank-set, that make it possible to run both the gates Belt drive, and use external bottom brackets. This will help stiffen up the bottom end, as opposed to a square taper we currently have with the Gebhardt cranks. Though there is nothing wrong with that, you can’t get many ‘high end’ square taper BB’s and it makes the servicing that bit more difficult. Another tool you have to bring with you away. We will retain the Duratec Bladed Carbon fork, and rim brakes, as necessary on a racing bike.

It is required to run rim brakes, but with the introduction of the SRAM22 Hydraulic set ups, we will look into the future to have a training bike with a steel front fork, and a disc brake set up. Build heavy and strong! With wheels: we have discovered a very short list of hubs that can take 3000w, and believe that Chris King hubs (with an upgraded stainless steel body) are the only reliable way we can continue. Greg at TWE knows just how strong we need wheels, and his build around that will be first class as always. For race wheels, again with the Chris king hubs, but with a very special rim, custom made with extra laminate, and reinforcement at the nipple insertion. 28hole and bladed spokes and finally we will run with an internal battery instead of external battery.

For the bars, stems and seat posts, I swear by Ritchey products, because they are engineered, not designed. I ride the WCS alloy Logic2, and Zac rides the WCS alloy Evocurve. We also run with wcs alloy seat posts.

What’s the best thing about riding a tandem? Never have to ride alone. You also get a great deal more respect and space on the road from motorists, as a novelty. It is always funny to have groups of people looking at you in admiration, because they don’t see a tandem rolling through very often! 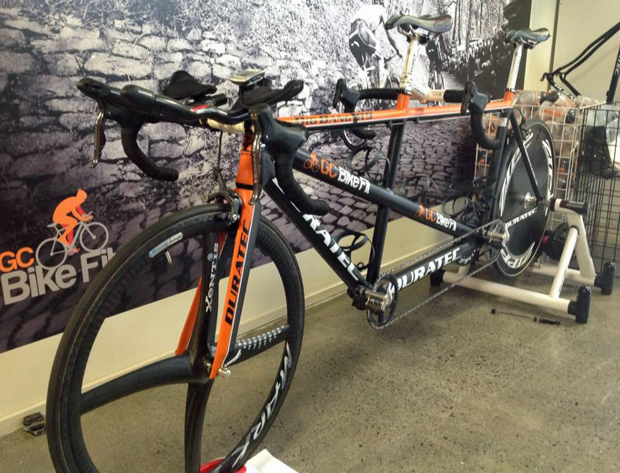 One advantage of a tandem? You only have to buy one trainer!

And the worst? Flying with the tandem. When your bike is 2m long without wheels, and the maximum length to travel on a plane as oversized is 1.9m….. Youre gonna have a bad day! If we need to go to an event within 1000km, we drive. Its easier! 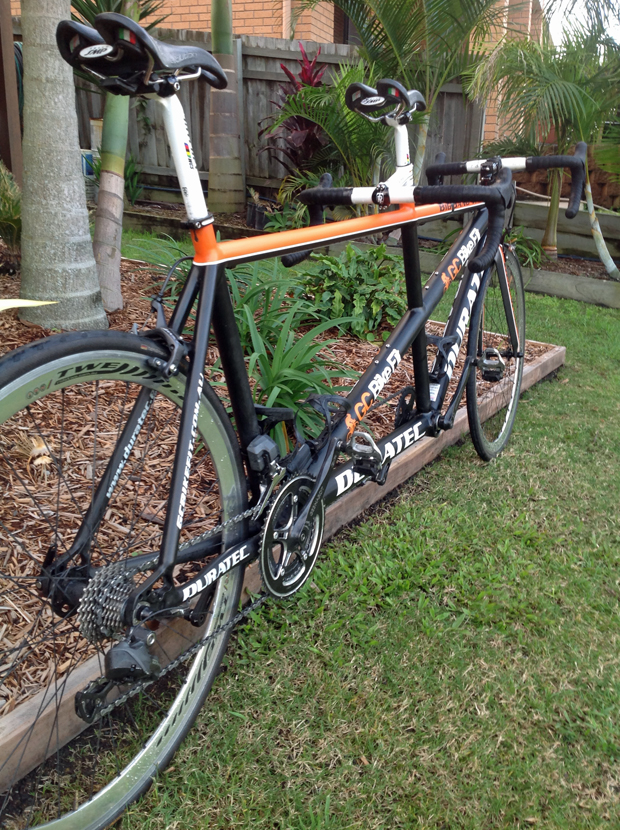 Yep, that is a lot of bike to get on a plane.

What is racing like on a tandem? We mostly race our local club races, 60km road races, or 1 hour criteriums, with our Local A grade. It is a high standard of rider, and is a challenge to see if we can break away and hold it until the finish. I think they are on to our tactics now though. The riders have to be a bit respectful of our size, but other than that we are treated as equal.

Last words? PEZ readers can follow our journey to Rio 2016 Paralympics on our Facebook page The Orange Tandem

Lotto Belisol: Dauphiné is final test for Van den Broeck in run-up to the Tour