The day before Paris-Roubaix amateurs had an opportunity to ride the storied cobbles themselves during the Paris-Roubaix Challenge Sportive. For those not willing to publicly display their pavé riding ineptitude, on the same day to the east another sportive mirroring a pro course provided an opportunity to publicly display one’s climbing ineptitude instead. We sent our Literary Editor to Belgium to experience the 2014 Brabanste Pijl Wielertoeristen.

“The lead riders swore audibly in Flemish, apparently from an inexhaustible source of curse words that seems to be their linguistic heritage.” 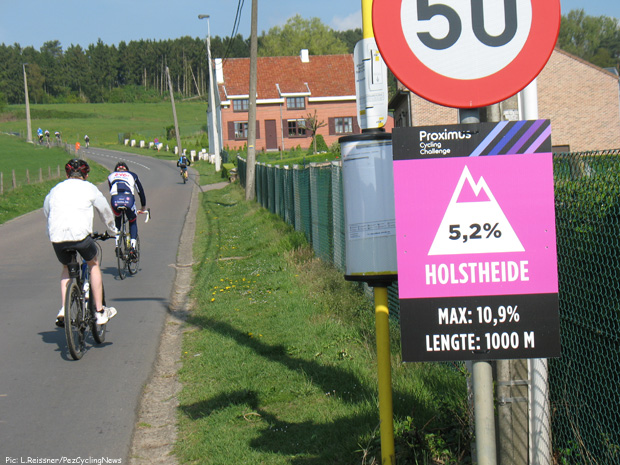 While not nearly as old as Paris-Roubaix, which dates back to 1896, de Brabantse Pijl (the Brabant Arrow), also known by its French name of La Flèche Brabançonne, has had many famous winners since its inaugural edition in 1961. In fact the first winner, Belgian Pino Cerami (who is still with us at 91) won the 1960 edition of Paris-Roubaix and eventually went on to become the oldest winner of a Tour de France stage at 41 in 1963. There is even a GP Pino Cerami held every year since 1964 in Belgium; it was won by Alessandro Petacchi this year (also on April 12).

But the rolls of the Brabant Arrow offer many famous victors: Tour de France winners Jan Janssen and Eddy Merckx; Mr. Roubaix Roger de Vlaeminck; sprint legend Freddy Maertens; double Flanders winner Edwig Van Hooydonck (who won the Arrow four times); triple Flanders and triple Roubaix victor Johan Museeuw; triple World Road Champion Oscar Freire (three Arrow wins too), along with some guys named Boogerd, Chavanel, Bartoli and Sagan. In 2011 Philippe Gilbert became the only rider to win all the Hilly Classics (Amstel Gold, the Fleche Wallone, Liege-Bastogne-Liege) plus the Arrow in one year. Categorized as a UCI 1.0 race since 2011, it is pretty important and Philippe Gilbert made a welcome return to the winner’s circle this past week in winning the 2014 edition. I of course wasn’t riding that race but instead an event five days prior.

Proximus Cycling Challenges manages a series of 12 Belgian events for amateurs spread over eight months. These “Wielerstochten” include versions of the Scheldeprijs, the Omloop Het Nieuwsblad and Gent-Wevelgem, among others. Entry is a reasonable 10 Euros, with feed stations included, route signage and, well, not much else. There is the promise that some retired or current pros will show up and apparently on Saturday these included Johan Museeuw, Nick Nuyens, Ludo Dierckxsens and cyclo-cross racer Niels Albert but they weren’t there when I arrived at 7:15 to sign in at the start in the old university town of Leuven, 25 kms east of Brussels. In fact, most of the organizers had not shown up either as the ride was scheduled to start at 7:30 and there were no signs anywhere. But cleverly obeying the Follow-Someone-Else-With-Bikes-on-the-Car-Roof Rule I soon enough found my way to the impressive Ladeuzeplein , Leuven’s major square which is overlooked by the huge old university library. 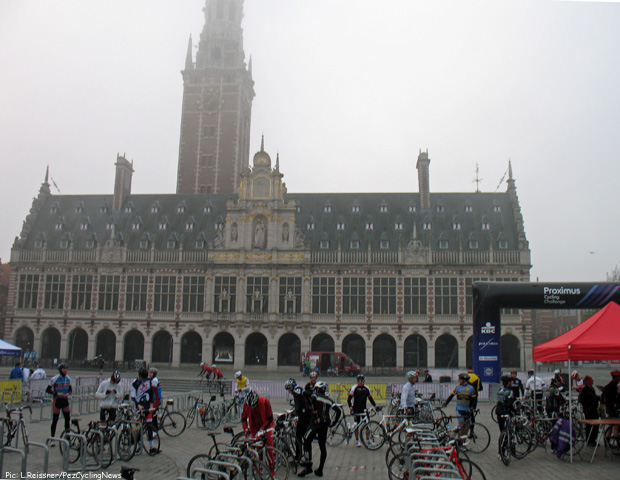 A moment to check in and given a wristband for the feed stations (no numbers or pins to mess with) and I was on my way through the streets of the city, founded in the 9th Century and featuring many beautiful 15th Century buildings typical of Flanders. In fact, the city is the capital of Flemish Brabant, a region that came about in 1995 when the province of Brabant (which has a long and headache-inducingly complex history) split into three parts: the Flemish one, the Walloon (French-speaking one) and the Brussels autonomous region. The Arrow goes into both Flemish and Francophone areas.

There were not many riders at this time of morning as the start was open until 10 am and the majority of cyclists were probably doing the shorter 72 km route rather than the 131 kms I was aiming at. It was easy to get out of Leuven, which only has a population of 100,000, and follow the purple arrow signs showing the way west towards Bertem. The loop heads south and then east of Leuven before working its way back and while it covers sections the pro race will take the fast guys will head more southwest in a straight line—hence the “Arrow” name. 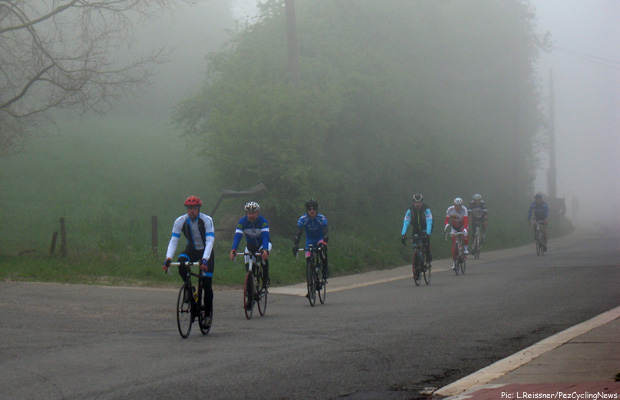 The organizers thoughtfully provide a list of the hills and feed stations that you can stick on your toptube, giving you a distance countdown from 131 kms. The first few of the 16 indicated hills are not really noticeable until you get to Langestraat at 113 kms, which is still an easy 6% average for 600 m. The weather was not very good as riding in dense fog I had to stop to wipe the condensation off of my glasses and there was a steady dripping of water from my helmet. But traffic was light although I was passed from time to time by big groups of fast Belgian club riders who were clearly not planning to stop to take photos. 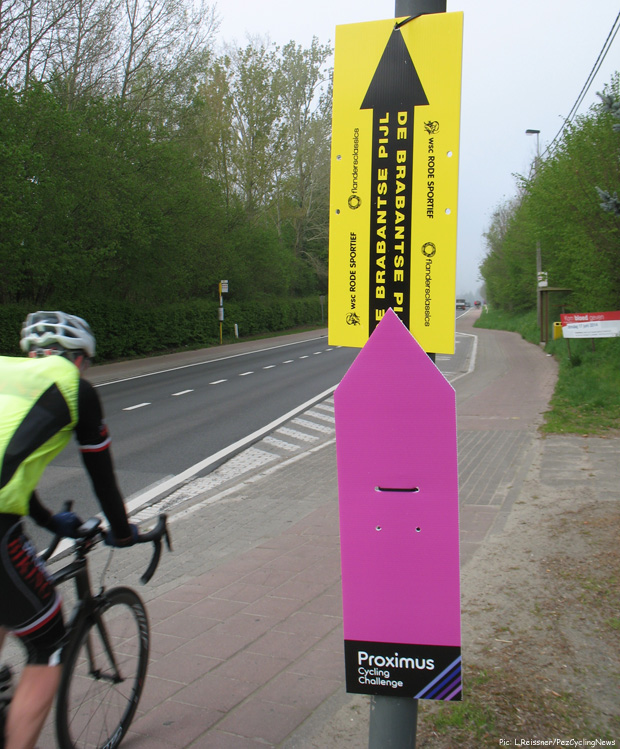 At Km 99 there was an interesting change in the fairly flat landscape as we turned a corner near Huldenberg and were suddenly confronted with Smeysberg, a startling climb that maxed out at 17 percent but luckily only went on for 600 m. Looking around, I discovered that Belgians are not afraid of using enormous pie-plate-sized cassettes to deal with the poisonous little climbs of the region. Soon after this we had the Ijskelderlaan, a more reasonable 12 percent maximum grade and the first Hellingen that we would see that would actually be on the pro course, marked with black and yellow arrows. A few more turns through a residential area brought us to Overijse and the first feed station. 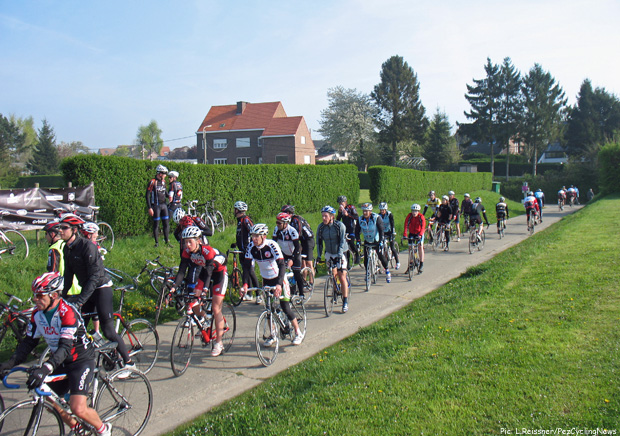 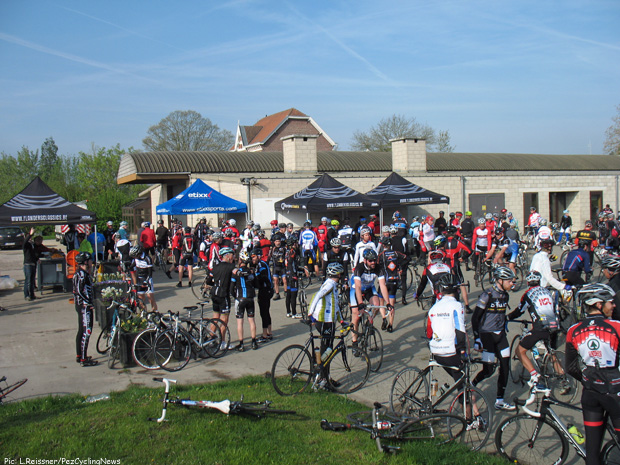 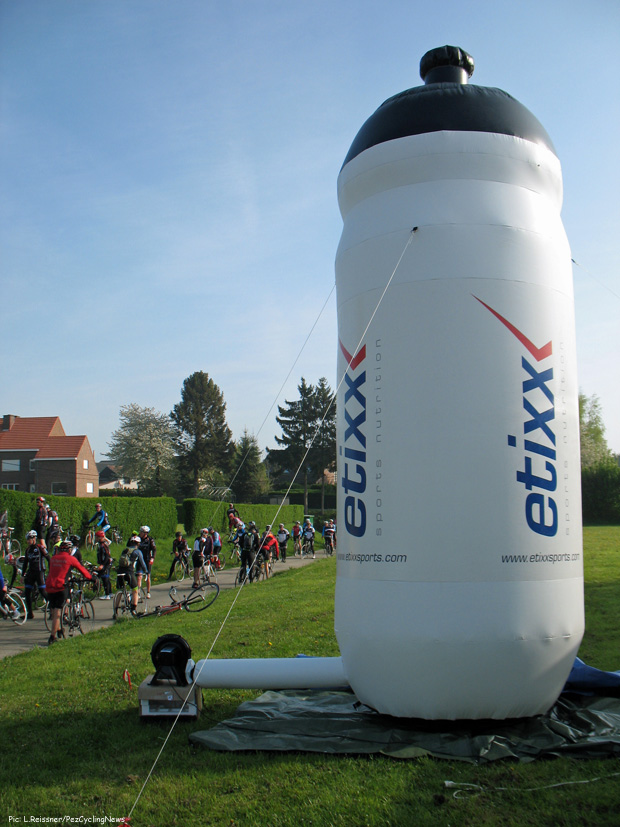 For your 10 Euros you have a pretty good selection of eats, including bananas, oranges, chocolate-coated cookies and, everyone’s favourite, waffles. There was energy drink as well as a station with hoses and faucets where everyone could easily refill their bottles. A mechanic was on duty and keeping busy and overall one could not help but be impressed by the organization of the whole thing. 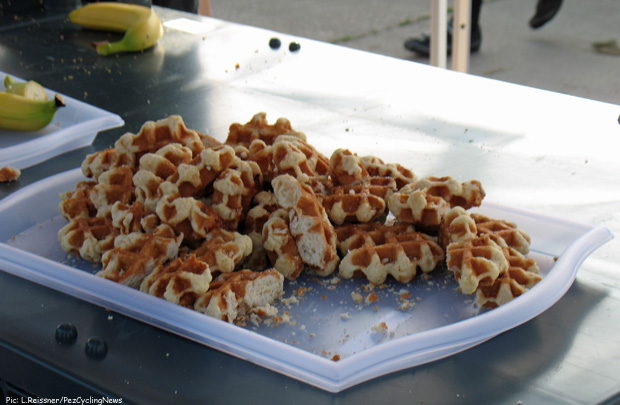 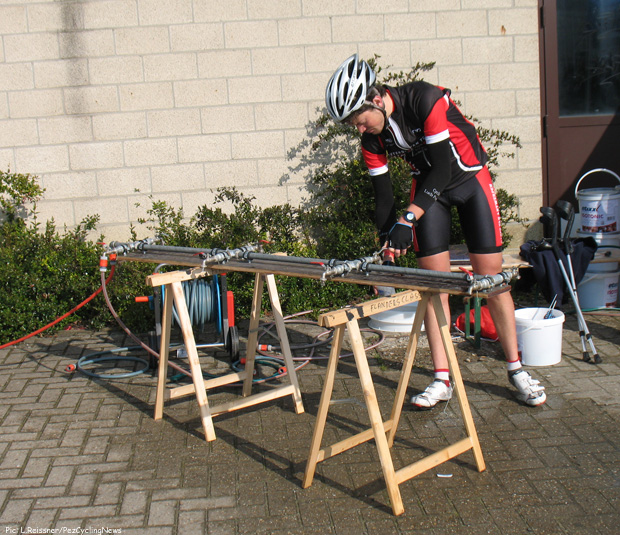 The sun had burned off the fog an hour before and we headed off for the next segment, which seemd to be doing a lot of looping around Overijse to include climbs (Schavei, Hagaard, Heerstraat) on the pro route. In spite of the dizzying parcours (Wait: is that Huldenberg yet again?) by the time we descended Heerstraat we were turned east towards Walloon Brabant, crossing into the French-speaking region at Km 65 and leaving the pro route behind for the remainder of the day. 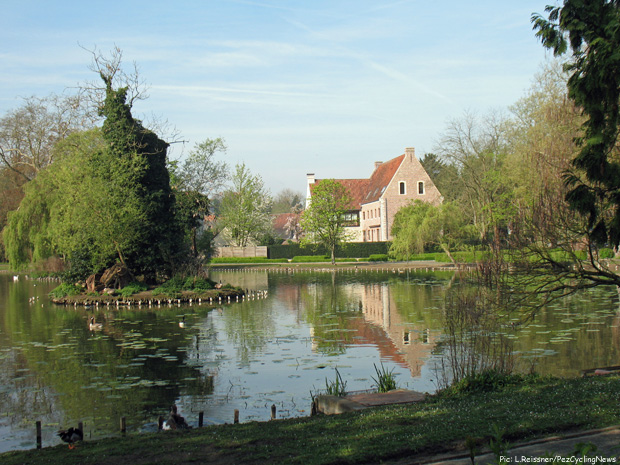 The course was definitely flatter now as we headed through the open fields or past orchards of apple trees in full blossom around Beauvechain, passing near a military airport. There was only one climb on the list worthy of mention, the Rue de Pecrot which hit nearly 14 percent. It averaged 6 percent but went on for a long time. It was quite warm now and I took off my armwarmers and was comfortable riding in shorts and short sleeves. Many of the locals were fully outfitted with tights and jackets but they also looked like their body fat percentage was modest compared to mine!

There was a wonderful moment when I turned a corner and stopped to take a photograph of the cobbled climb that had suddenly appeared. I moved over to the wide and smooth sidewalk/bikepath and as I took out my camera large groups of riders also appeared. Everyone’s response to the unexpected challenge of the cobbled climb was the same and as each group came by the lead riders swore audibly in Flemish, apparently from an inexhaustible source of curse words that seems to be their linguistic heritage. 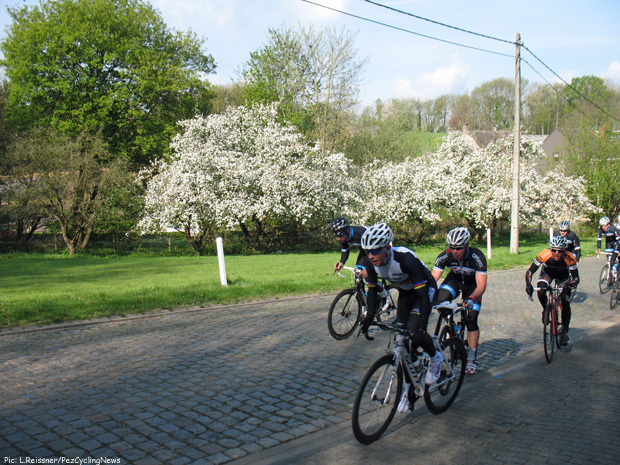 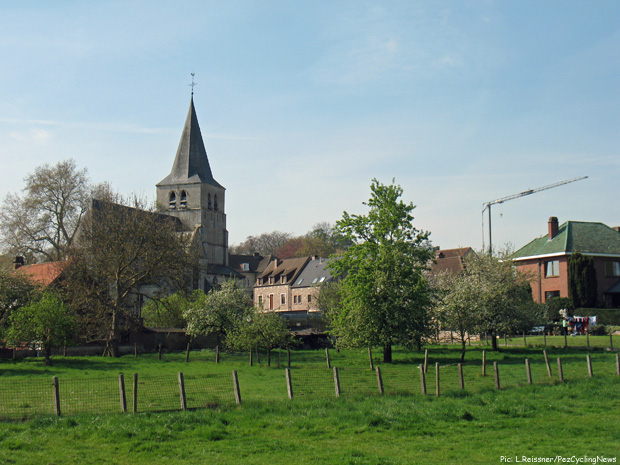 I was starting to get a bit tired now from the climbing (to say nothing of my laughably insufficient training) and was relieved when the second feed station appeared at Willebringen. Some more waffles and the home stretch began. I mentally braced myself for the hill at Neeverlpsestraat at Km 29 but it was pretty easy. What was tougher was the final climb at Km 8 on Korbeekdamstraat, another 500 m with a maximum of 11 percent, and where I was not the only cyclist to suffer from leg cramps. But soon enough the road dropped and we found ourselves on a fast run-in to Leuven and the Ladeuzeplein. 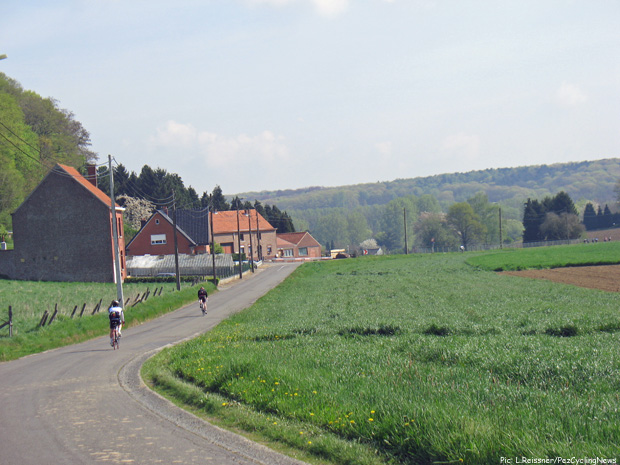 Crossing the finish line resulted in nothing more than a good feeling. Unlike the Paris-Roubaix Challenge there are no medals or, well, anything except marquees where plenty of club riders were already putting down plenty of beer. Leuven, in addition to its ancient Catholic university, is also the home of Anheuser-Busch InBev, the world’s largest producer of beer. Unlike German rides which often begin at sports grounds there were also no showers but it was a short drive for me to Kortrijk and my hotel. The next day I would watch the Paris-Roubaix pro race with my own beer in hand from the comfort of a luxury tour bus but my experience at Brabantse Pijl, riding with 2400 others in the phantom wheeltracks of Eddy Merckx and the rest, just confirmed that Belgium remains one of cycling’s Promised Lands. 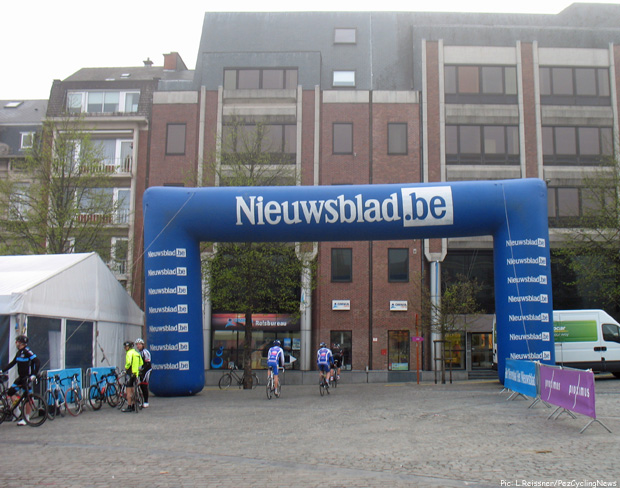 For more information about other amateur events organized by Proximus Cycling Challenges, go to the not entirely comprehensible sort-of trilingual website at: https://www.proximuscyclingchallenge.be/nl/cycling-challenges

When not sweating under the tropical Belgian sun, Leslie Reissner may be found practicing Flemish curses at www.tindonkey.com

McCabe Solos To Victory In Winston-Salem