Course Preview: The 2014 Strade Bianche race on the famous gravel roads of Tuscany features some new sectors of Chianti’s answer to the Belgian cobbles. PEZ joined ex-pro Diego Caccia to ride the new gravel sections, take in the Tuscan countryside, and log a perfect day away from work.

After a long winter the will to go out into the sun and spend a great day talking about cycling was too strong – so I decided to turn a standard Friday into a day I will remember for a long time. Together with Diego Caccia (ex pro cyclist whom we first met here) and his friend Davide, I went to Tuscany to inspect the new Strade Bianche route just a week before the race. 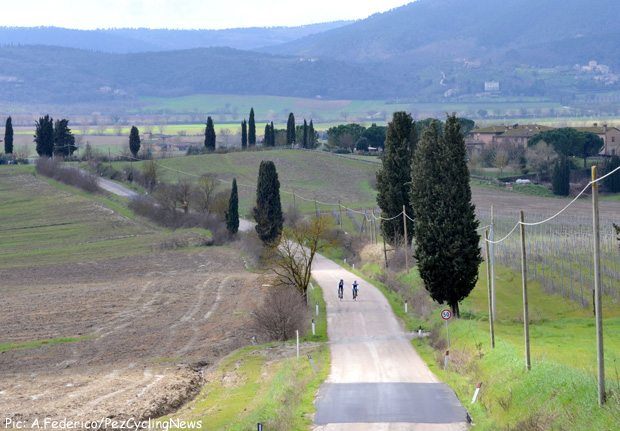 A day at work or a day exploring the beauty of Tuscany? Easy choice Ale.

Despite the fact that Strade Bianche is a relatively new race (first edition in 2007) it’s already climbed to the top of my favorite one day races, competing now with my first love: the Milano Sanremo. The beauty of the Tuscan landscape, the gravel roads and the food are three strong arguments on the side of the Strade Bianche, so now, when the winter started to show the first weaknesses the draw of the white gravel roads in good company was too much – I had to go.

When RCS revealed the new route with some important changes in the first part I wasn’t happy; I loved the previous route and I was worried the new white roads sectors couldn’t compete with the previous ones. But now, after being there, I’m much more relaxed and I look forward to this Saturday to live another great cycling moment. 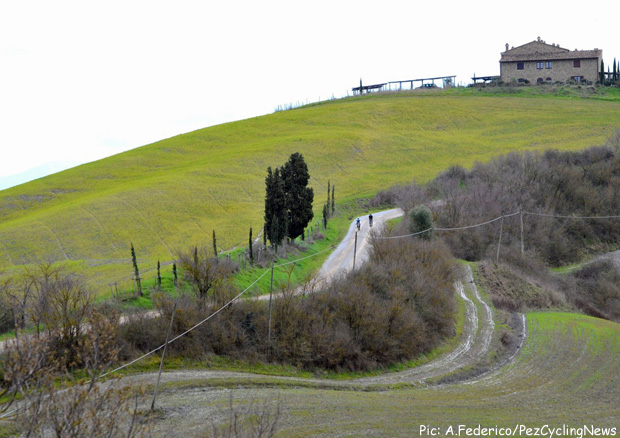 Last winter I had some email exchanges with Diego Caccia, an ex pro rider who was a teammate of Chris Froome at Barloworld in 2009 and later on of Visconti at ISD. Diego gave up at the end of 2012 when he couldn’t find a contract; he wasn’t a winner but was that kind of rider able to make you win, working for several kilometers in the shadows against the wind. He was also one of those riders very generous at races and he was protagonist of long breaks out in some very important races. In 2010 he was in the break at Sanremo and at Lombardia and the previous year he was caught just a few hundred meters from the finish at Strade Bianche. So, who better than him to evaluate the new roads? 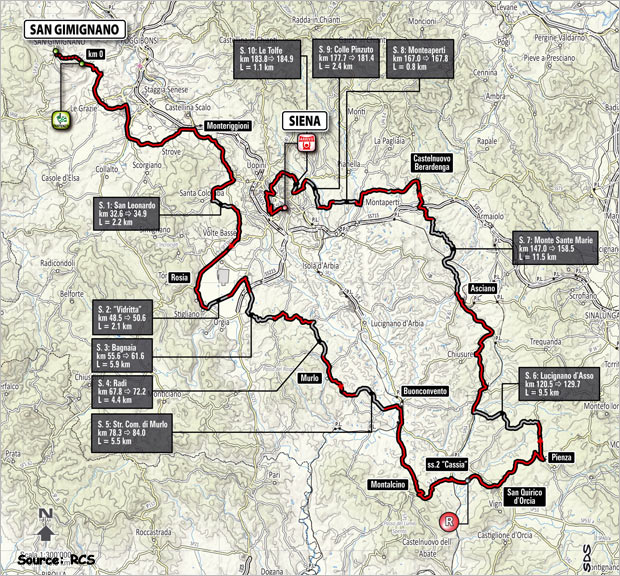 After close inspection, Ale’s convinced the new sections of gravel roads will honor the race perfectly.

The plan was to meet in Siena at 10:30 and together with Diego is coming also Davide, teammate of Diego when they were juniors. The day wasn’t perfect but considering that in the Appennines it was snowing we couldn’t complaint. We put the bikes into my car, Diego is riding a Passoni, full titanium, simply perfect. Equipped with high quality fittings this bike is a jewel and what makes it unique is the fact they prepare it for your own – custom built. I love the fact the metal is natural looking. Sandblasted and with absolutely no paint – a naked beauty. 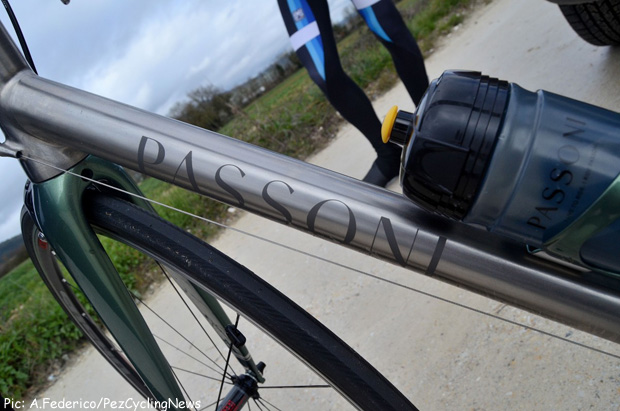 We decided to avoid sector number one, too short to say something about and we concentrated on number 2 and 3. These are two new pieces of gravel roads which weren’t in last year. The first one is straight and flat. My car runs very fast on these roads, the dirt is perfect considering that the fields around are total mud. The fact the gravel is wet helps to avoid the white dust that is typical for this race. 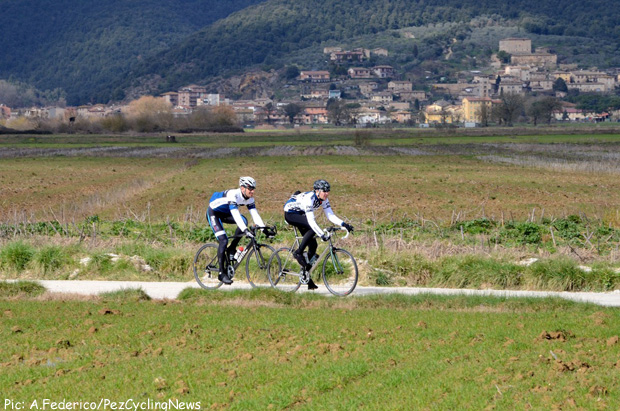 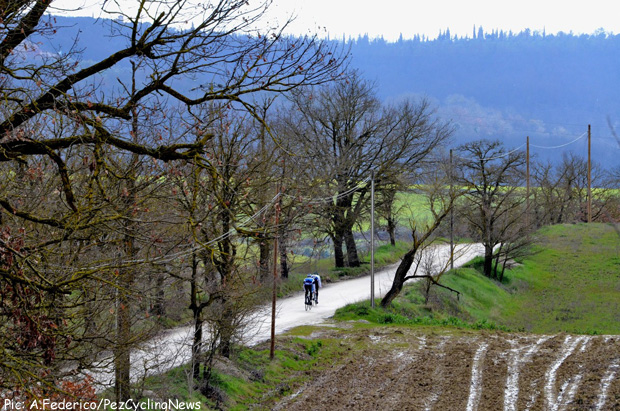 So Diego and Davide ride quite fast on this part of road and they continue towards the third sector which is a bad one. The first part is flat and nice but then suddenly turns to a 3-4 km climb inside the forest. The gradient is 7-8% and the gravel isn’t perfect like it was on the flat. But the two guys have good legs today and they overcome the hill with ease. The sun also comes out and we have the opportunity to change some clothes and to talk about the road done to that point. “The first sector we did (sector number 2 in the race)” – starts Diego – “is a dangerous one”. “It’s all straight ahead, if the wind blows lateral and some teams want make some casino (Italian way to say mess), that part is perfect for an unexpected selection”. However the race is just at the beginning and it’s difficult to think something serious can happen there, but never underestimate a pro rider’s advice. They know what can happen. 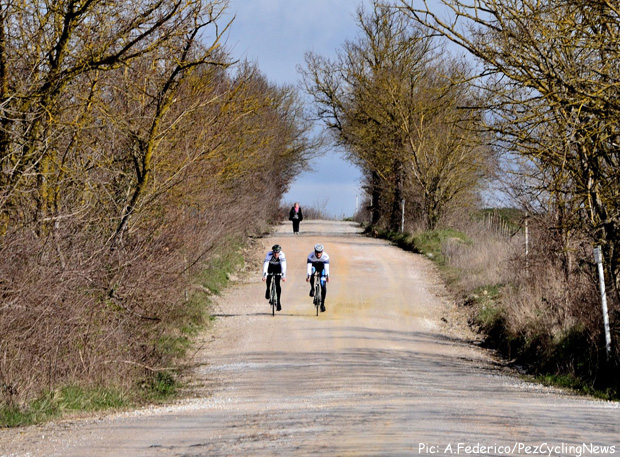 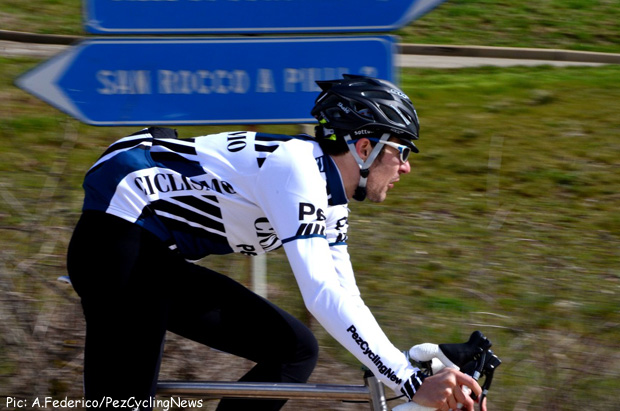 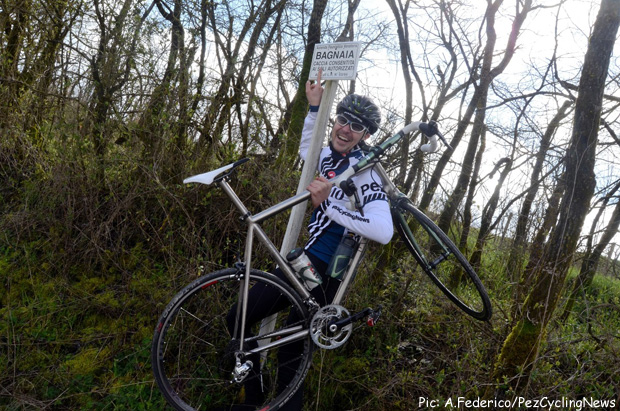 These white roads are secondary in the local viability and are passing through ancient lonely places. We have the opportunity to admire the local pigs (cinta senese) with a typical white collars around the neck. The prosciutto that comes from here is unique. 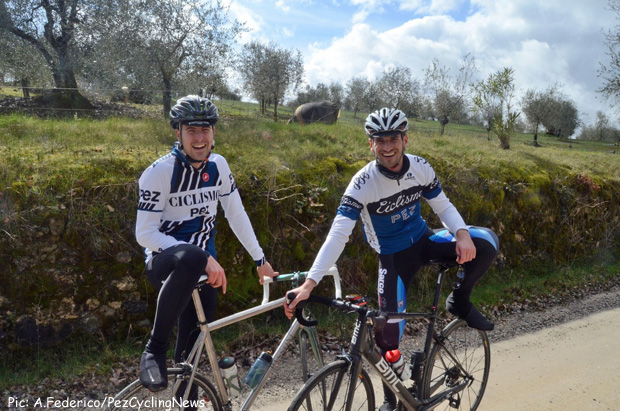 This view and thoughts makes us hungry, but it’s too early to think about lunch. Also, our plan wants us to transfer to the bottom of the most difficult part of the race: Monte Sante Marie. This was sector number 5 till last edition but this year will be renumbered to number 7.

It’s a hilly, twisty road inside the crete, this very special landscape typical to Tuscany with few trees growing in the land. The two guys come up fast, but the gradient is sometimes very high. It’s not a regular climb, you have also flat parts and very scary descents. In one of them Diego crashed in 2011 edition; not a good memory. “But the worse memories I have from my career are linked to the cold. I hated the rain and the cold especially, this is one of the reasons I didn’t enjoy the Belgian races.” Diego is very tall, 1,90 meters and looking at him you immediately think to a pave rider. “But I was also a good climber, I won the best climber standing at Settimana Bergamasca and I was second in the same classification also at Tirreno Adriatico.” 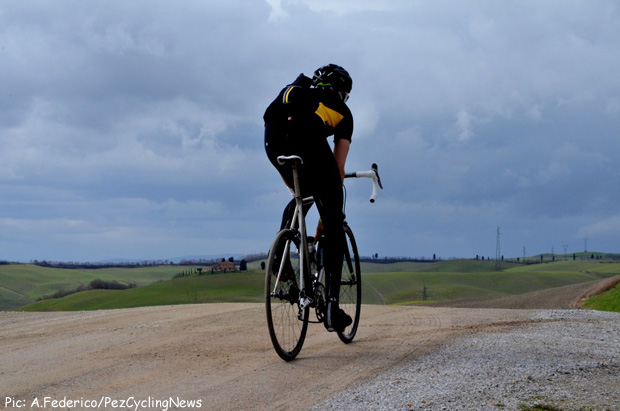 Now, the storm from the north is bounding south exactly against us! So I decided to stop the car, wait for the two riders and to invite them to a restaurant. Diego and Davide do not make any resistance, despite the fact that they didn’t complete the sector; it’s two o’clock in the afternoon and they have ridden almost two hours. A fast change of dress and we come back down to Asciano, the town at Monte Sante Marie feet; remember this name, here begins the real race! 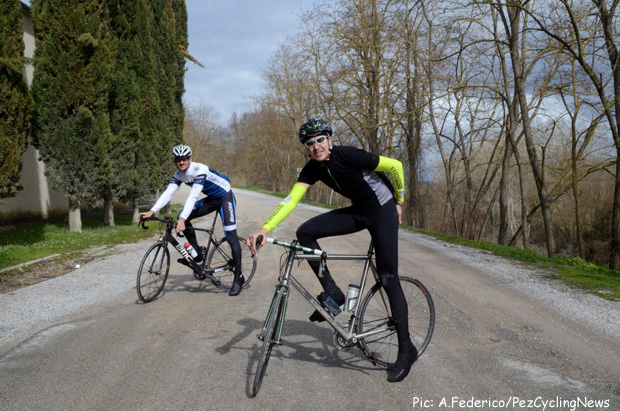 Here starts the real race. Straight ahead is the Monte Sante Marie with climbs and descents up to 20% 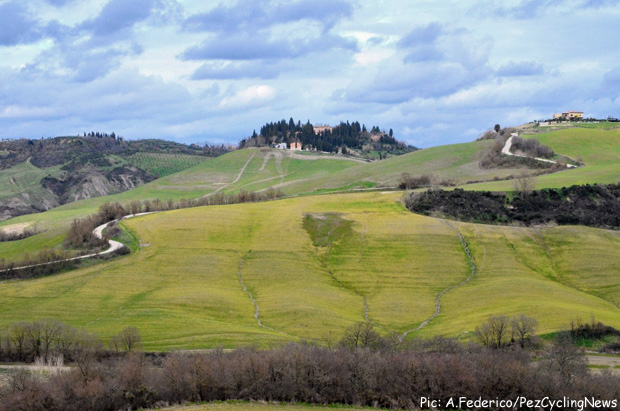 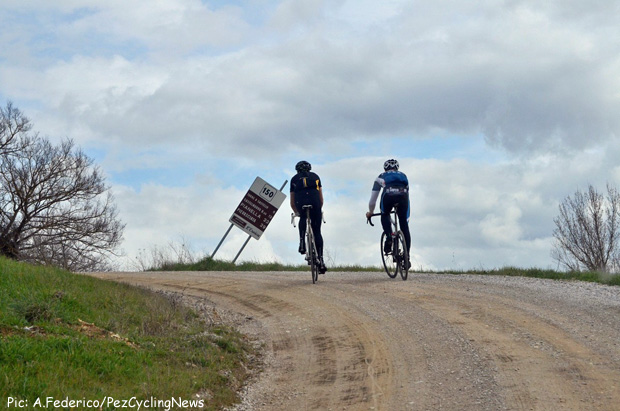 The restaurant is almost closed, but they are very kind and they accept us despite the late hour. A selection of best local prosciutti and cheese is the best way to recover the strengths – for me too – Well, driving these roads is also energy consuming! 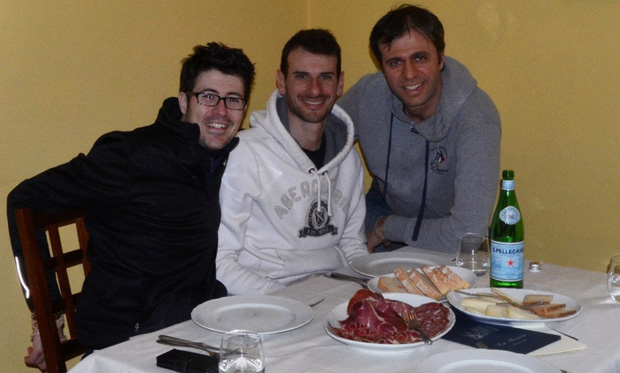 Now it’s just a matter of time. The lonely white roads crossing the green hills of the Tuscany will sleep until Sunday and will be then invaded for a day by the greatest names in cycling and thousands of fans. Fast professional wheels will cross those eternal fields and the tifosi will wait for hours for their passage. So now go on the dream. The great cycling can start again. 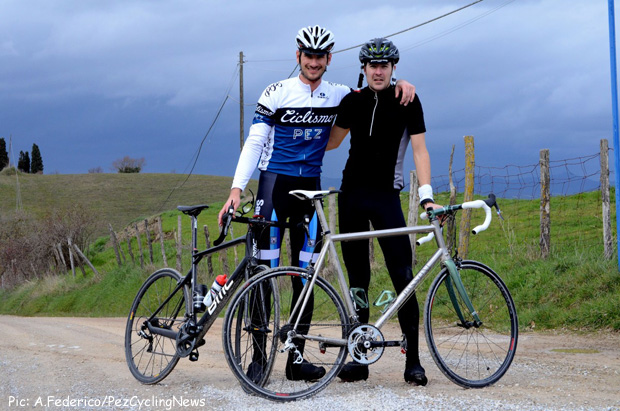 Stay tuned for the full Pez coverage of the 2014 Strade Bianche.