After the cold and rain of Saturday’s ‘Flanders Classics’ Het Nieuwsblad, Sunday dawned clear and sunny for a perfect day of racing action roadside in Belgium at the Kuurne-Brussels-Kuurne.

If we got Saturday wrong when we said QuickStep would win, we got it right when we stated if they didn’t win on Saturday then they’d win on Sunday.

Another day of beautiful bike racing in the Flatlands . . . .

After forcing Kuurne’s abandonment last year and testing us on Saturday, the Weather Gods smiled upon us on Sunday and Kuurne was bathed in warm, spring sunshine. 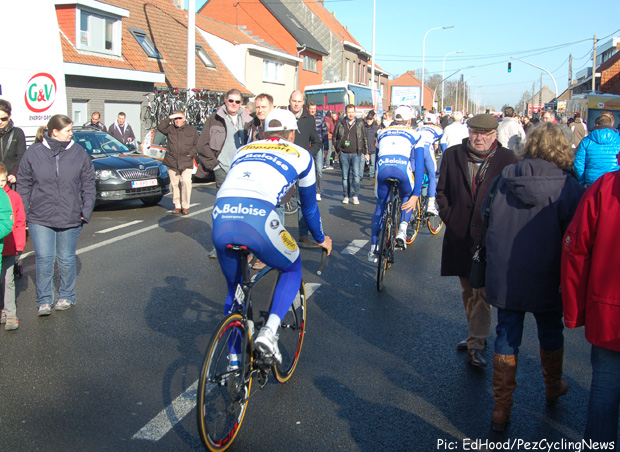 Not being part of the ‘Flanders Classics’ marketing package the vibe at the start is much more relaxed, we love the sight of the riders zigzagging through the throng to the sign on, it’s how it should be. But bike racing in Flanders is a serious business and the press need answers if things don’t go right for the two home ‘Super Teams,’ QuickStep and Lotto. 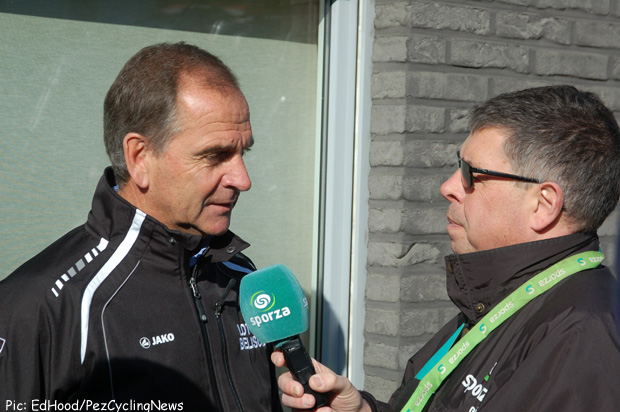 The ever polite, patient and eloquent Marc Sergeant – head honcho at Lotto – was explaining to a poker faced Sporza (the premier spots news agency and TV programme in Belgium) reporter why the best his boys could do in Gent was Jurgen Roelandts 13th spot. 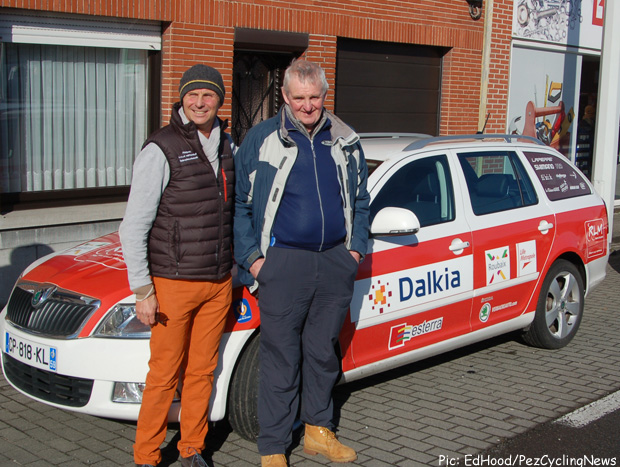 And it’s always a venue for meeting old friends; Dave met up with team mate from the 80’s – when Dave was a VC Roubaix man – Daniel Verbrackel. Daniel is still involved with the club and it’s pro team, Roubaix Lille Metropol. 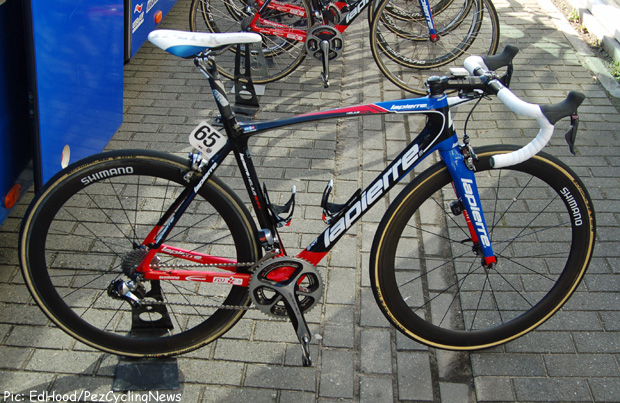 Then of course, there are the bikes – we were drooling over Androni’s Bianchis at Gent and today it was the turn of the F des J Lapierres to get ogled. They’re colourful whilst not wandering in to Liberace territory but have that purposeful look to them – nice. 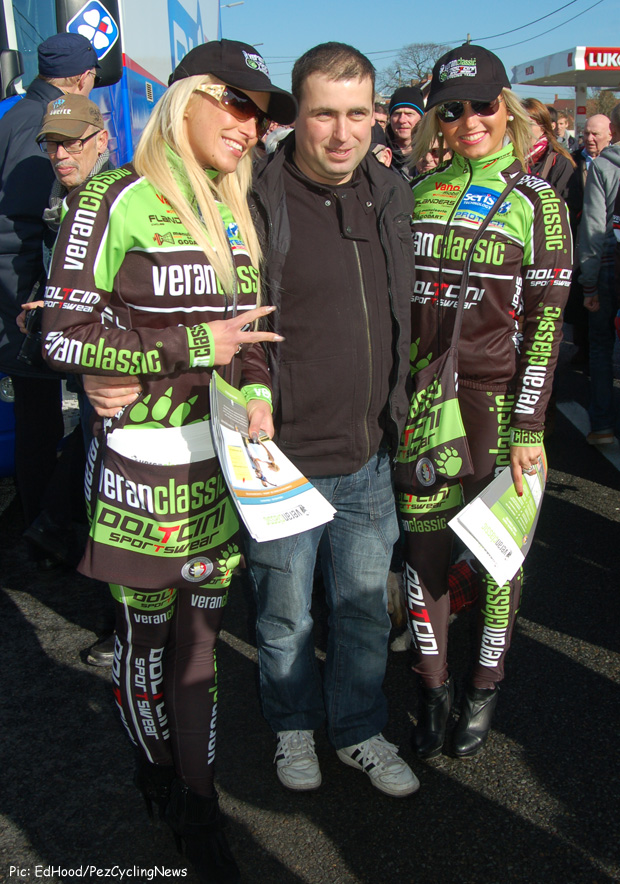 And the sun always brings out the pretty girls – we weren’t complaining . . . 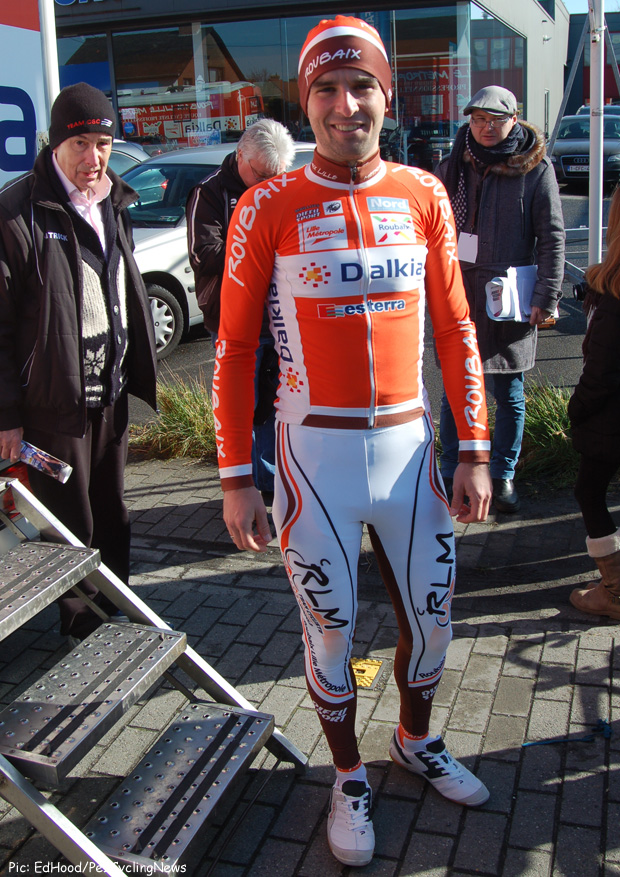 A man who caught our eye was Baptiste Planckaert, the latest member of the famous extended cycling dynasty – he won the novices Het Volk back in 2004 and is a solid professional, witnessed by his runner-up spot to Kenneth Vanbilsen in the Marseillaise last month, ahead of the likes of John Degenkolb. 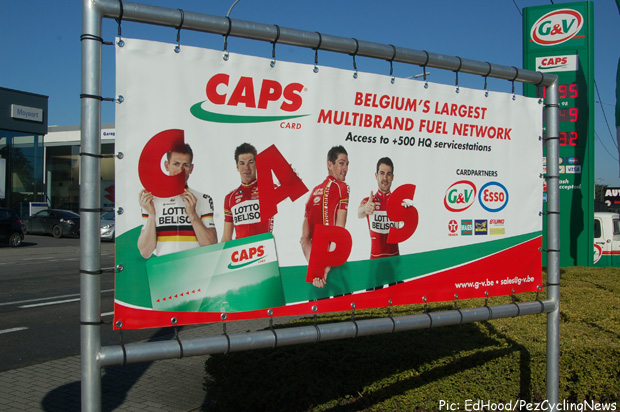 There are reminders all around you in Flanders that all the team sponsorship is far from there for fun; those names on jerseys are there to sell product. And if big Andre says you should buy a fuel card then you better listen. 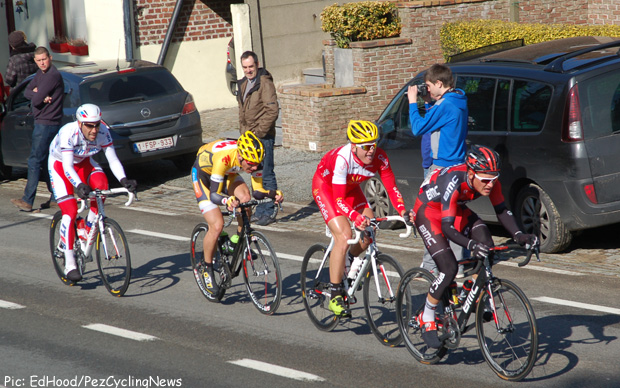 The first stop was the Edelare, really just the long drag up out of Oudenaarde on the road to Brakel. No cobbles but it’s long and no one was smiling in the break led by Six Day Nights of Zurich, Tour of Normandie GC winner and Tour of Alberta stage winner, Sylvan Dillier (BMC & Switzerland). Sylvan has featured on PEZ before and if we’re any judge is headed for the top; his appearance in the break was the hi-lite of BMC’s day. 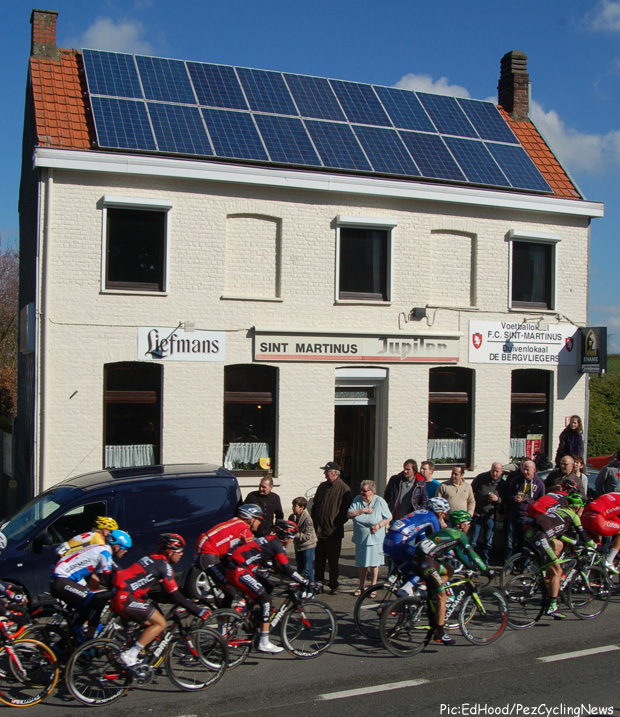 There’s also a rather nice bar on the Edelare where a wee Cognac has become a PEZ tradition. It’s difficult to ‘race hop’ after this point, the race heads east in a flattened loop and past experience has taught us that it’s not worth the crazy driving to try and catch it out there. 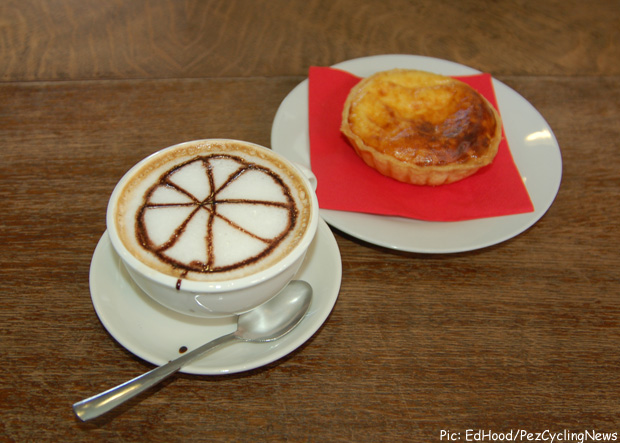 Instead we headed for Oudenaarde and the Ronde Van Vlaanderen museum where the coffee isn’t bad but looks better than it tastes – the rice tart was excellent, though. 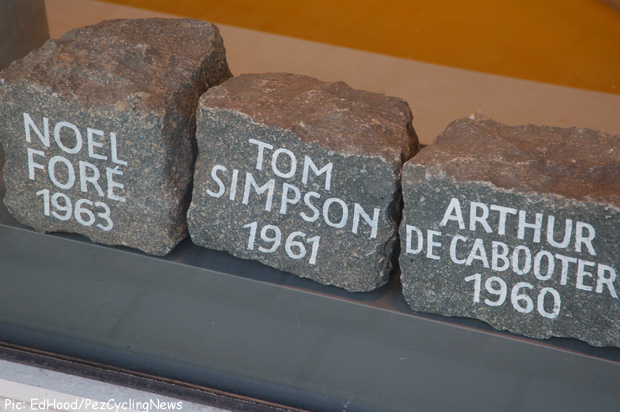 And we paused for a moment to remember Tom Simpson, who won this race in 1961; still the only English speaking rider ever to have pulled off this momentous feat – respect. 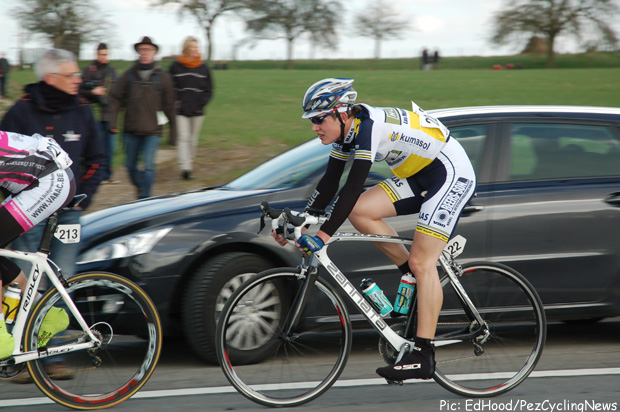 The junior race found us as we headed for the top of the Oude Kwaremont – those boys were revving out on their restricted gears as they flew back down the main road. The young man in the picture is Julian Spierings – a future winner of the elite event? Time will tell; this edition of the race fell to young Englishman James Shaw. 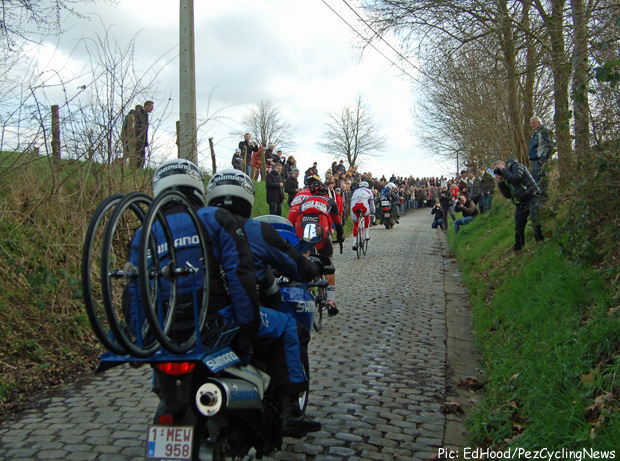 The Oude Kwaremont is the real thing, long, cobbled, muddy and with a false flat in the middle where the crosswind tears at you. Russian champion Vladimir Isaychev led the grind to the gallery at the top for Katusha with Dillier and Cofidis’ Estonian Gert Joeear lagging off his wheel – Dutchman Michael Vingerling was gone, but a job well done for his Belgian Continental outfit, 3M. 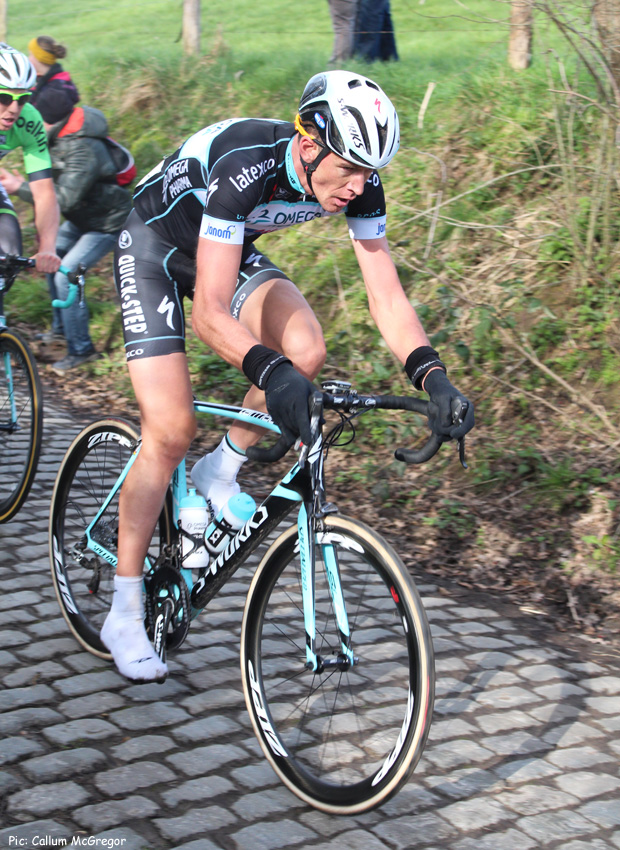 But the overture was rapidly heading towards curtain down as the real stars of the show began to move towards centre stage for the finale. And although we didn’t know it, the decisive choreography was occurring at that very moment as BiG Stijn Vandenbergh drove the strung out peloton.

Spending watts like a drunken sailor spends Euros on a night on the town he dragged clear the other nine ‘Bigs’ who would dominate the race – including team mate Boonen and three other QuickSteps. 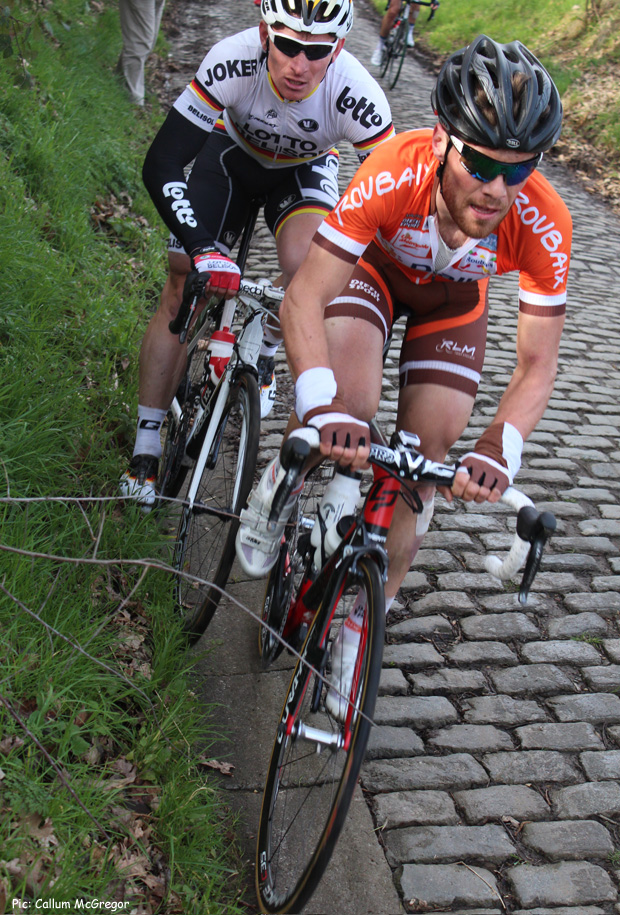 PEZ’s race favourite German Champion, Andre Greipel (Lotto) was desperately trying to keep in touch, not helped by Roubaix’s Jean-Lou Paini almost riding him off the road and onto the grass bank. Callum took the best picture you can when you think a ‘Gorille’ is going to land on you. 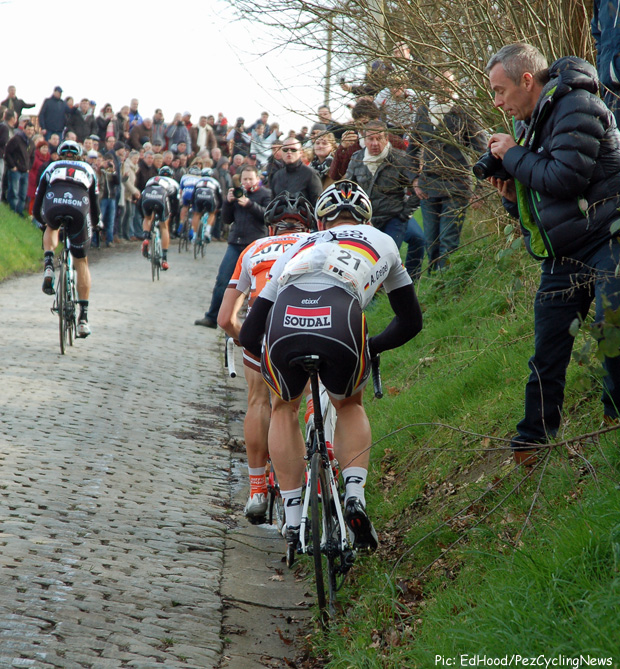 I snapped it from behind; and if I was Jean-Lou I’d avoid the Lotto bus for a week or two. 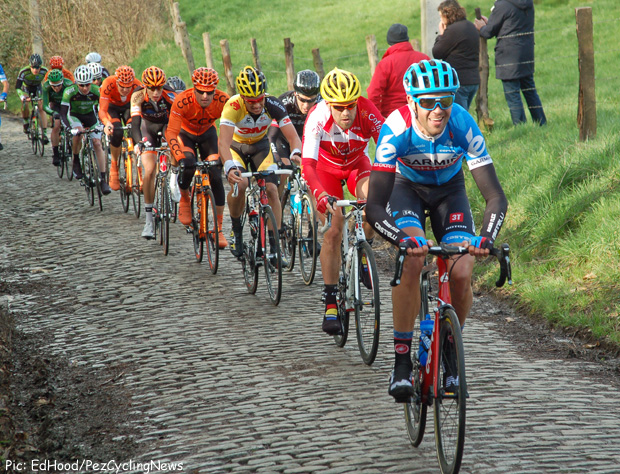 It was the usual carnage behind with little groups of desperate men fighting for survival behind the QuickStep Blitzkrieg. Former Kiwi champion Jack Bauer leads this group. 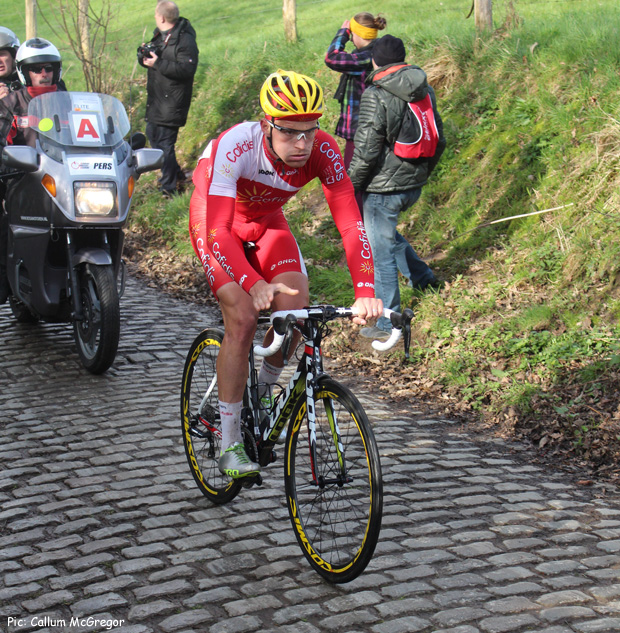 Last man on the road was Cofidis Frenchman, Adrien Petit hoping that the boss would be happy enough that they’d had a man in the break of the day. At this point you can head for Kuurne and the finish, see nothing and forget where the car is – OR

You can head for Bar L’Escale in Ronse where the patron has a TV set up for us in the back room, drink pils and watch the last hour on TV. You can guess the answer . . . 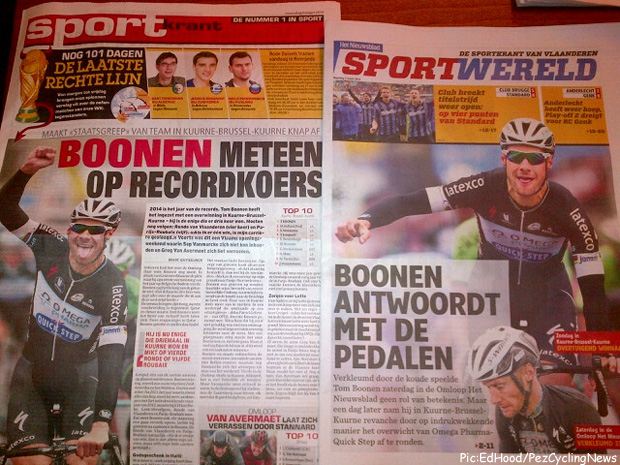 Quickstep did what we knew they would and delivered Tomeke perfectly – would you want to explain to Patrick Lefevre how you’d messed up two days running? No, me neither.

As PEZ predicted, Belkin’s up and coming Dutch sprinter, Moreno Hofland was right there, pushing ‘Tornado Tom’ all the way to the line. Belkin took third too, with Sep Vanmarcke – the man of the weekend, working hard both days, taking fourth in Gent as well as making the podium here. 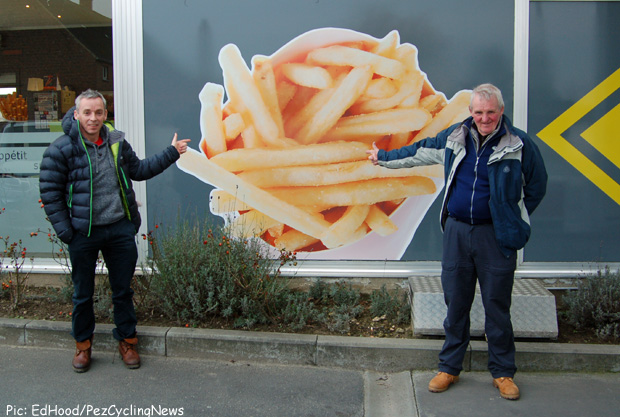 All that remained was to find a frituur and discuss the day over those golden beauties. 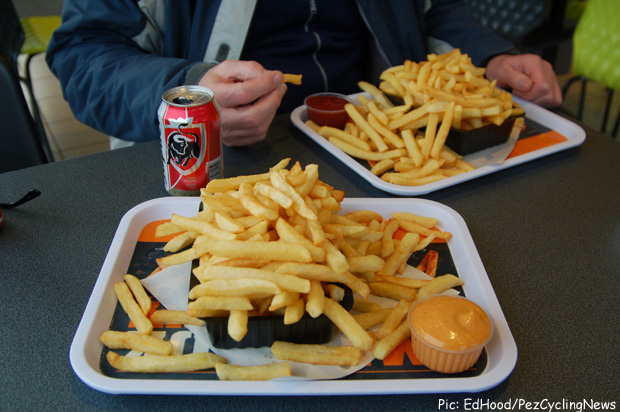 However, what we didn’t realise was that the sticker in the window was the actual size of the portions. And for the first time ever a portion of frites had the beating of us. Two great races, two outstanding winners, sunshine on Sunday, frites, pils – do we really have to go home?