Roadside At The British Nats!

Cav, love him or hate him, but you have to respect him. He was in the break practically all day and when the QuickStep man was still there as one of the three survivors of the original six with 350 metres to go, you knew there was only going to be one winner.

Ian Stannard (Sky) was second after having been up the road since lap one with Scottish ‘home boy’ Dave Millar (Garmin) taking third. Sky men were fourth and fifth too; dropped from the break on the last lap, Olympic team pursuit champion Peter Kennaugh was fourth with Luke Rowe leaving the chasing group to take a solo fifth. 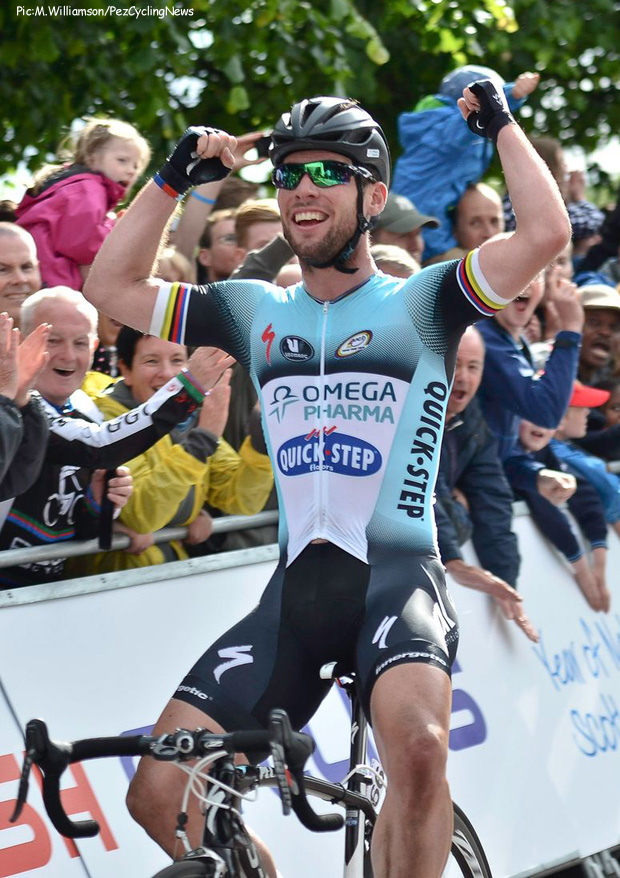 But despite three in the first five, the day belonged to QuickStep, not Sky. If there was any doubt about the fact that Cav was serious, then it was dispelled by the sight of the Belgian team’s immaculate car and the presence of DS ‘professor’ Brian Holm at the start.

Glasgow’s notoriously fickle weather was in benign mood and Scotland’s second city provided a great back drop for the race. I’m from Kirkcaldy in Fife on the East Coast, famous for linoleum manufacture and coal mining – but there’s little evidence of either now, outside the museums.

My home now is in Edinburgh, Scotland’s capital; a move I’ve never regretted. Edinburgh is beautiful and I love living there; but the capital lack’s Glasgow’s soul. Edinburgh has always been a city of commerce – banking and insurance have long been the main stays and there’s an air of superiority over its larger – and what the Capital’s residents see as it’s less sophisticated – neighbour to the west. But Glasgow had the shipyards and heavy industry, whilst the River Clyde was a conduit for musical and cultural influences from all over the world.

It’s friendlier, more cosmopolitan, less full of itself and much more laid back than Edinburgh. Britain’s biggest one day race in my favourite city; ‘I’m a lucky boy’ I thought as I boarded the train at Waverley en route Queen Street in the heart of Glasgow.

And before I write another word – my tip for the white jersey with red and blue bands before the race started? 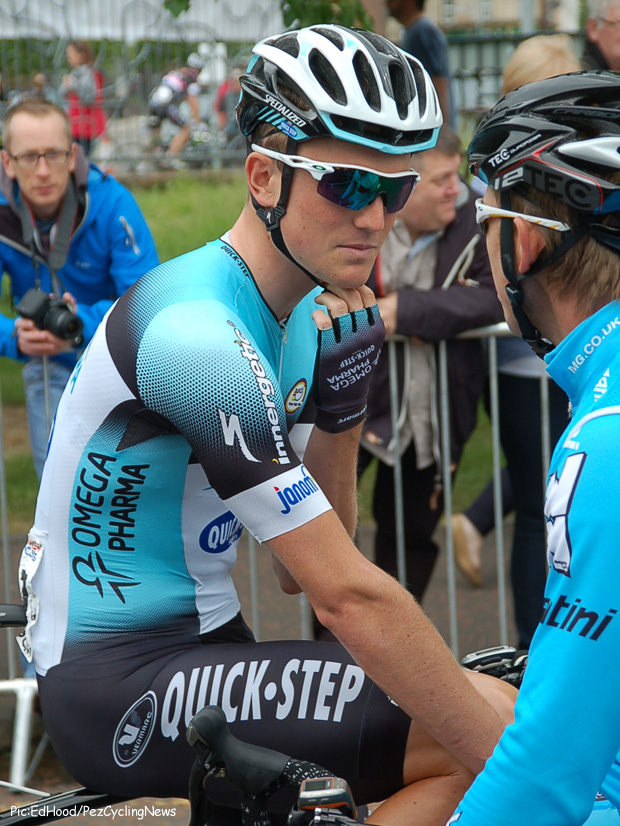 Andy Fenn, QuickStep, his mum is Scottish and the form is good. The start was at Glasgow Green, a park beside the River Clyde in the city’s East End.

In Gaelic, Scotland’s ancient language, ‘Glasgow’ means ‘Dear Green Place,’ and on the Green that’s appropriate, but a bit less so as you head into town. The East End is different from the ‘studenty’ West End and most of our day was spent out east and in the city centre. 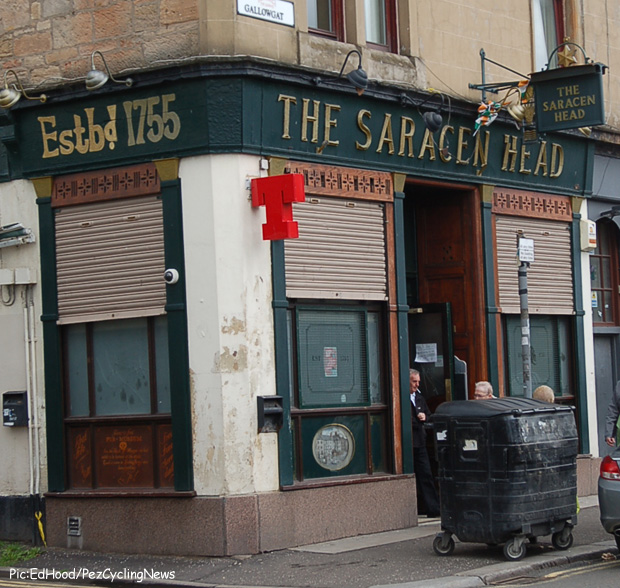 Glasgow has a plethora of cool – not to mention ‘earthy’ – bars with The Saracen’s Head falling into the second category, it’s been there since 1755. Legend has it that a petrol bomb was once thrown in there during the days of east end gang warfare. But there was no problem – one of the patrons picked it up and drank it.

Glasgow is proud of its musical heritage; influenced hugely by the seamen from the ships from all over the world which docked there until a couple of decades ago. One of the most famous venues is the Barrowlands Ballroom; grey by day but a neon temple by night. 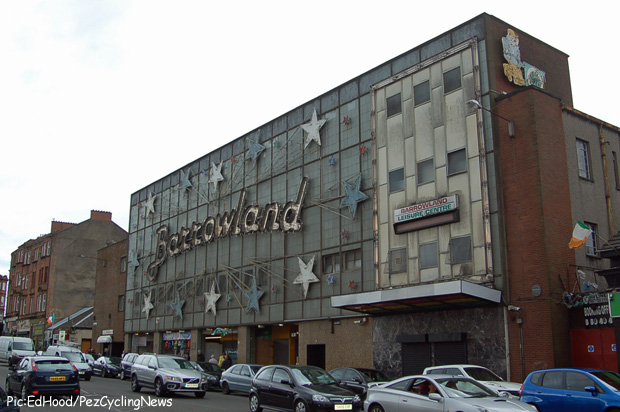 I haven’t been for a while but have seen Iggy Pop, The Ramones, Soft Cell and Metallica – to name but a few – within its sweaty walls. But let’s not forget about the bike racing. 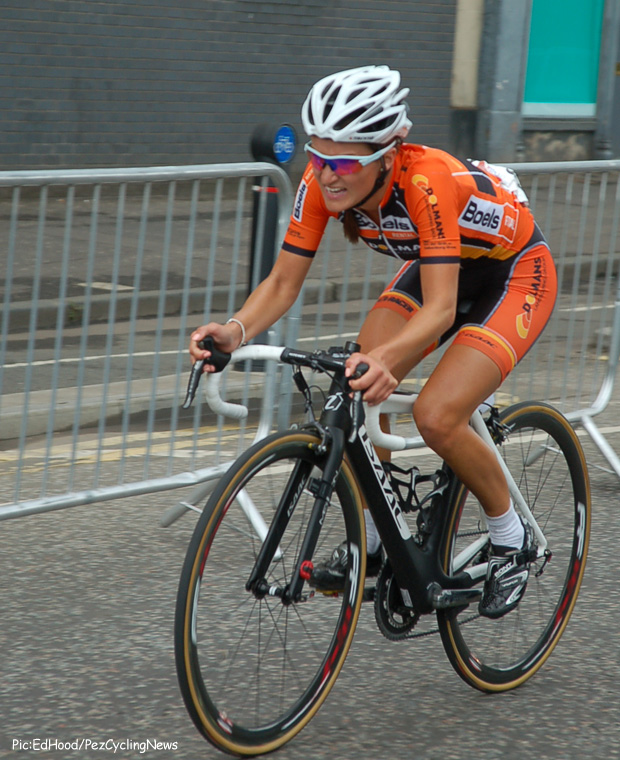 As I headed down from Queen Street Station, ladies’ winner Lizzie Armistead whistled past me on her last lap – 41 seconds clear and taking victory in the grand manner. 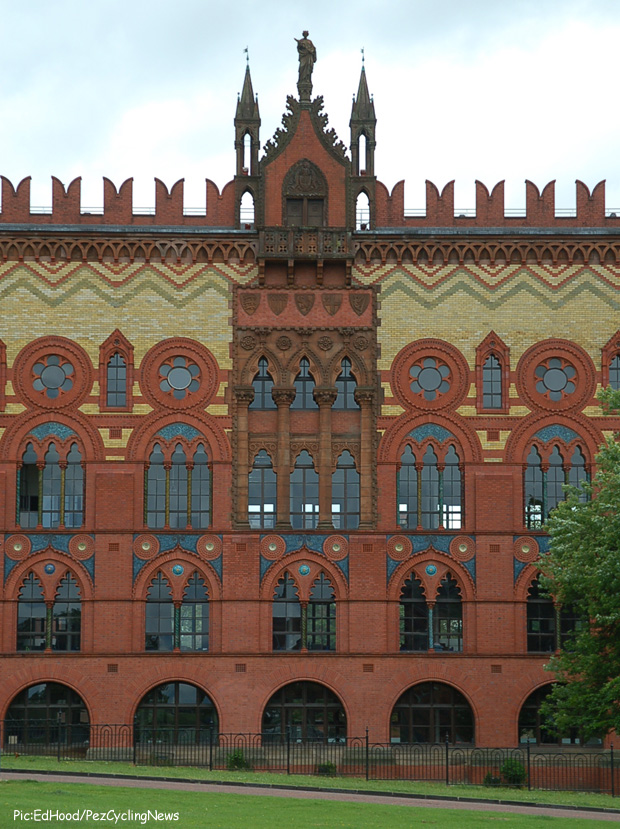 On the edge of the Green is the famous Templeton Carpet Factory, dating from 1892 in Moorish style – many died due to accidents during construction and it’s alleged to be haunted. Best to keep walking.

The field was mustering as I arrived at the start – and the first man I saw? Andy Fenn.

But it wasn’t an omen – he’d ride himself into the ground for Cav all day and not finish. Our first sighting of the race proper was towards the end of lap one on the quick zip down to Glasgow Cross. Last year’s champion, Ian Stannard was away virtually all day in 2012, bludgeoning the field into submission one by one. Old habits die hard and the big chap already had daylight, with ‘my boy,’ Andy Fenn.

The field was smashed; with the day over before it had really begun for most. Where we stopped to watch ‘Man of Steel’ Stannard was just round the corner from one of my favourite Glasgow Oasis – Babbity Bowsters. 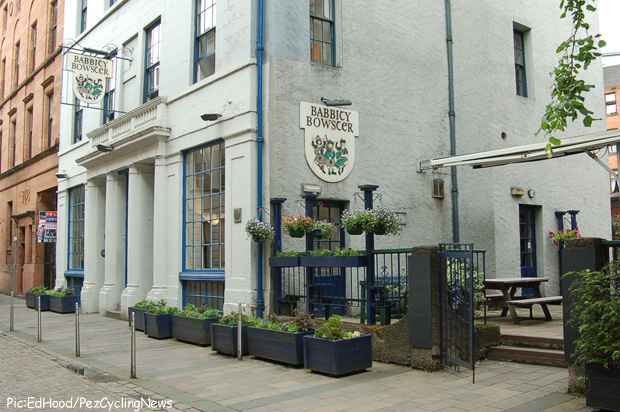 In Auld Scots, a ‘Babbity Bowster’ is a bit of a rascal – but Babbity’s is one cool bar. A mixed crowd, great food and wines – plus musicians come in to jam around the log fire on Saturday afternoon in the winter. And there’s a beer garden for when the sun does shine.

Our second sighting of the race was up past the cathedral with Stannard and Fenn working smoothly. A group was coming up; Millar (Garmin), Kennaugh and Swift (Sky) and Cav. Dave and I looked at each other and chanted in unison; ‘well that’s the race over, then!’

Just two laps in and the field was looking more like Napoleon’s retreat from Moscow by the minute. The top of the short sharp snap which brings the race up from the city centre was our next vantage point. 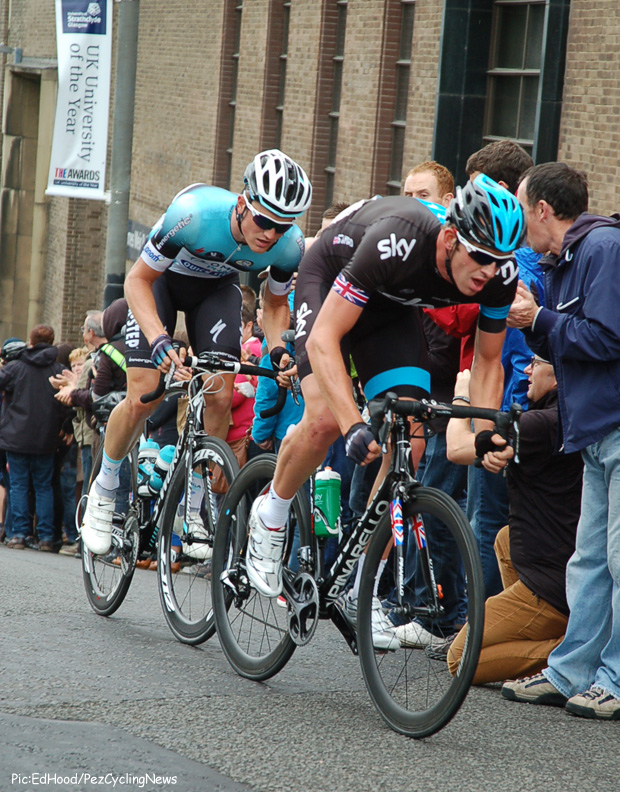 Stannard was bestial – riding on the drops – Fenn a little less so but still impassive and very impressive. 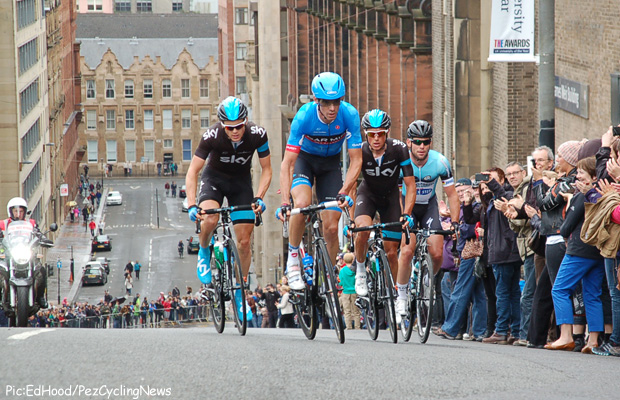 The Millar group was closing up with Cav looking ominously comfortable at the back, on a tiny gear to save his legs.

Behind, a group was trying to organise itself – but there was just too much quality up the road with even the likes of British Time Trial Champion Alex Dowsett not having fun.

Although, to be fair to the Essex man he still bore the scars from his crash during his winning ride in the time trial championship on Thursday night when the base tape of his front tubular parted company from the carcass as he banked in the first left hander of the race.
The status quo stayed the same as we wandered down into town and George Square, the heart of the city.

A little group had got itself together and was in pursuit of the Millar four – Scott Thwaites (NetApp Endura), Simon Yates (100% ME), former champion Kristian House (Rapha Condor JLT), Andy Wilkinson (Team UK Youth) and the inevitable Sky man, a slim looking Luke Rowe. 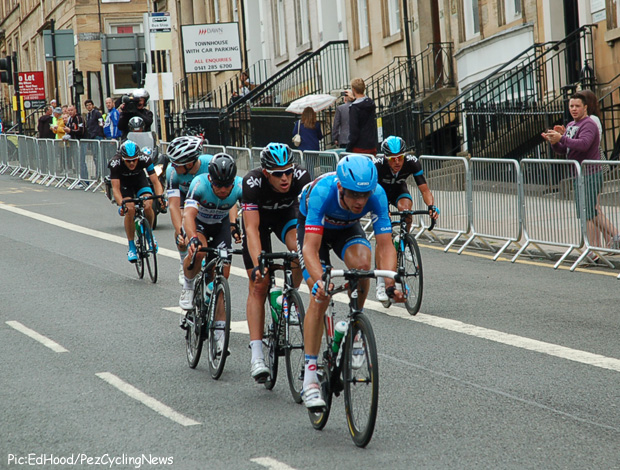 But whilst they looked for a lap or so like they may make a fist of it, there were just too many horses loose ahead of them as the four became six; Cav, Fenn, Kennaugh, Millar, Stannard and Swift. The way the parcours was laid out we could watch them slog up St. Vincent Street then, while they did their loop around the West End, cut across and watch them plummet down West George Street like bricks down a well. 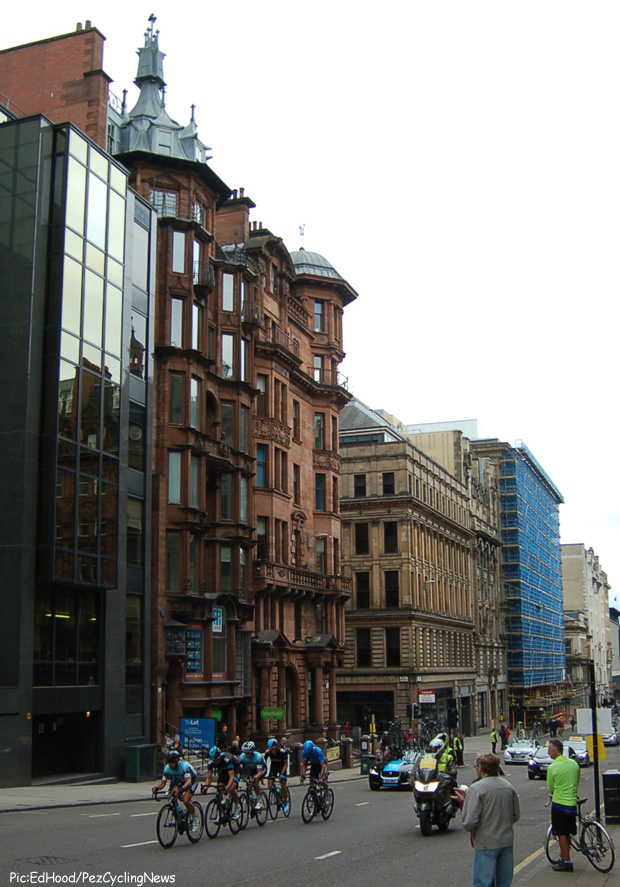 Cav looked more impressive by the lap, even leading the group up the hill past the famous ‘Hat Rack’ building, eight stories of Victorian glass and red sand stone hung on a steel ‘skeleton’ and looking more like a piece of furniture than an office building. We decided it was time to head back to Glasgow Green and the finish straight – it was wonderful to see some of the best bike riders in the world ride through the heart of the city.

Just off Buchanan Street is Rogano, a beautiful 30’s Art Deco cocktail bar and restaurant said to be have been fitted out by the same carpenters who worked on the ocean liner the Queen Mary – it was surreal to watch what was left of the field whizz past. Back at Glasgow Cross, six had become four with Ben Swift and Andy Fenn gone – Swift still fighting back to his best form after a horrible early season crash in Mallorca; whilst Fenn had given his all for Cav. 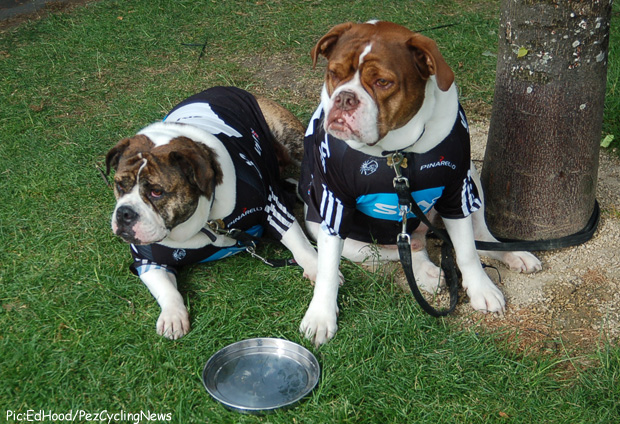 Ben’s dogs took it bad, we have to tell you. 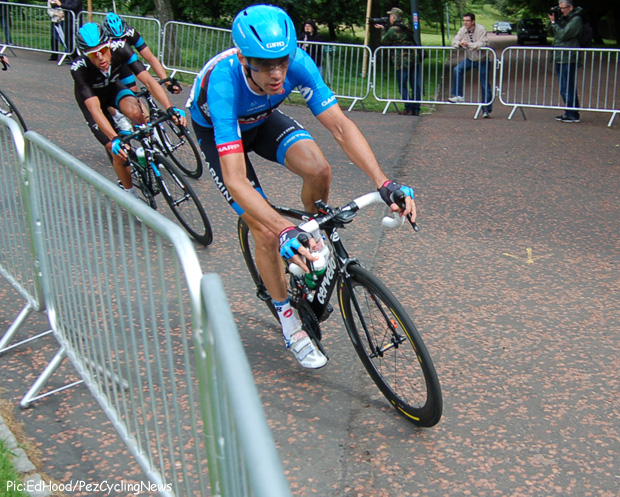 In need of a seat after our perambulations we took up position on the Green, beside the Clyde; Millar looked smooth and classy, Kennaugh looked hyper, Stannard looked like Godzilla – and Cav looked calm, cool and dangerous. 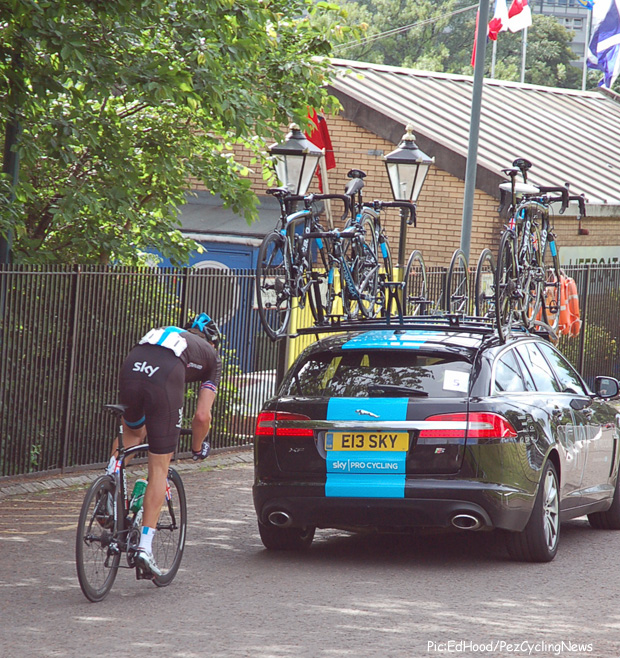 Stannard even punctured and got back on – but maybe there was just a little help from the team car . . .

Behind, Luke Rowe had left the chasers and was in No Man’s Land – in search of those precious UCI points we’d wager. Just to be controversial, I changed my bet to Kennaugh but knew full well that if they couldn’t get Cav out of the back door then there was only going to be one winner. 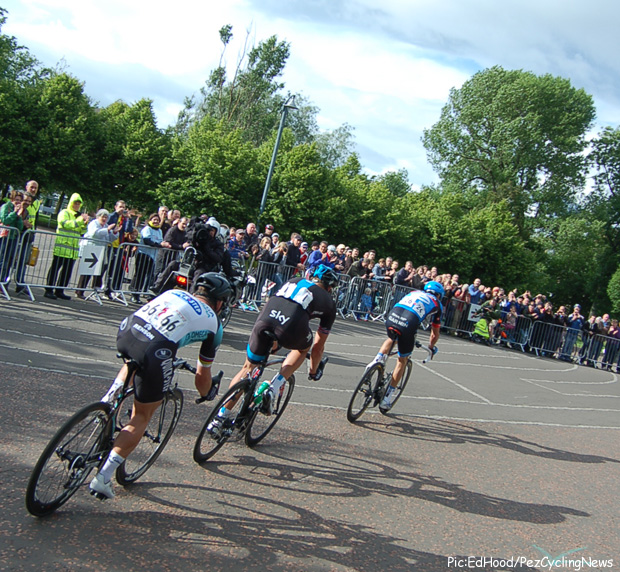 At the last corner with around 350 to go the four were now three, Kennaugh had gone – Cav was at the back, making final adjustments to his booster rocket sequencing and by the line had put two seconds into Stannard and eight into Millar. Cav in yellow after stage one in Corsica? It’s hard to see anyone getting the better of him on this form.

Wonderful weather in a great city; a tough, well organised race; a podium of real quality – both Millar and Stannard are former champions – and an outstanding winner. There’s not really much more you can ask from a bike race.