Last Thursday, I sat in the dentist’s chair and wondered, in my nitrous oxide haze, if this pain was worse than what I’d be feeling in Georgia in a weeks time. Knowing what I know now, I’d gladly sit in that dentist’s chair again, on broken glass no less, for double the time instead of riding today’s time trial course. 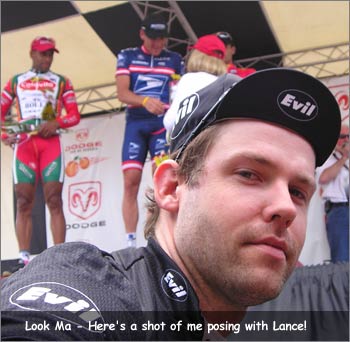 Today saw Lance Armstrong flex his muscles characteristically in the individual mostly uphill time trial, and uncharacteristically in the sprint at the end of the road stage, taking both victories on this double stage day. Today also saw your intrepid author upchucking his midday meat and bread while quietly dying up the time trial course. I had heard there was a hill on the course – not a mountain. I wish I could give you visual evidence of what happened, but there would be no picture taking this day. Today was a day for suffering like a pig, and suffer I did.

In Georgia, all roads lead to Rome.

Before this glorious exercise in super slow pedal cadence and regurgitation, I was lucky enough to enjoy some non innard-removal riding earlier in the day. Myself and the now fixtures of Buc Nasty and Joe Bob the wonder driver drove into Rome, Georgia, took an alternate course up through the campus of Berry college (no relation to Berry Floor). Through thousands of acres wound a path so beautiful, it was like a postcard picture laid out before our wheels. For upwards of thirty miles, we spun through lush vegetation, old water mills, stone churches, and of course, the campus itself. It seemed like a nice alternative to what was planned for us, as the route called for 4 lane highway riding most of the way. I should have done the 50 there on the highway, and skipped the time trial part of the course, at least my lunch would still be inside me.

As we finished the college tour, and the nice lunch in downtown Rome, I suited up again to tackle the 18 mile TT course with some of the Discover Adventure group’s strongest riders. Off we went, hammering the first few miles of the course, which saw us going over some pretty good rollers, which would be mere pimples in comparison to the behemoth of a climb ahead of us. The pace was high and we shed a few riders, and soon enough, my card got pulled too, and I was gone. “No worries”, I thought to myself, “I’ll just recover and get home on my own. The weather is nice, a bit windy, but this won’t be bad. Wow, there’s a hill up there.” That’s no hill. Or as Obi Wan once said, “That’s no moon, that’s a space station.” Vic, the rider we’ve come to know as The Missile, destroyed us all, and we had to choose our own adventure up the slogging climb.

The pain began immediately as my sometime fluid spin became a mangled pile of squares mashing against my frame as I put all my weight into the pedals to continue forward motion. I tried the paperboy. I tried throwing up. I even grabbed the tailgate of a passing pickup for 50 feet or so, to try to recover. All those ideas failed miserably. I ended up having to clip out and have a sit with some kids whose house was on the slope. They fetched me some water to stave off the cold pricklies, and I regaled them with mumbling, million mile stare stories of what life is like on the Tour. Just before they ran to get their parents for fear of this stuttering sweaty idiot perched in their front lawn, I remounted and somehow made the rest of the climb, albeit very slowly.

Tomorrow is Hogpen. A hill so viscious, people are saying today pales in comparison to what we’ll be facing then. Great. If I live, I promise to write. If I die, I’ve asked that the crew send my front wheel to my Mama, and tell her I died fighting valiantly.

PEZ-CLUSIVE Update: Friday, 12:02 PM – PEZ-Man Ted Arnold just called in his position from the backseat of the Lead Media car on today’s ROUTE: Dalton-to-Dahlonega, 134-mile (215.5 km) with TOTAL CLIMBING of 18,953-ft/5777 m! How cool is that? Stay tuned for updates as we get ’em from today’s killer stage! For more ‘tour-of-the-tour’ information, contact
Discover Adventures toll free at 866.44.ACTIVE or visit their specific webpage for the 2004 Dodge Tour de Georgia Tours. Reservation deadline is Friday, March 26, 2004.
Like PEZ? Why not subscribe to our weekly newsletter to receive updates and reminders on what's cool in road cycling?