Roadside Giro: Calm Before the Storm

Giro’14 St.13: Giro di PEZ St.13: PEZ-man Ale Federico has both feet planted in the top of the boot at the foot of the Alps – which made a gorgeous backdrop for today’s run north from Fossano to Rivarolo Canavese and our PEZ-Clusive Roadside reportage. 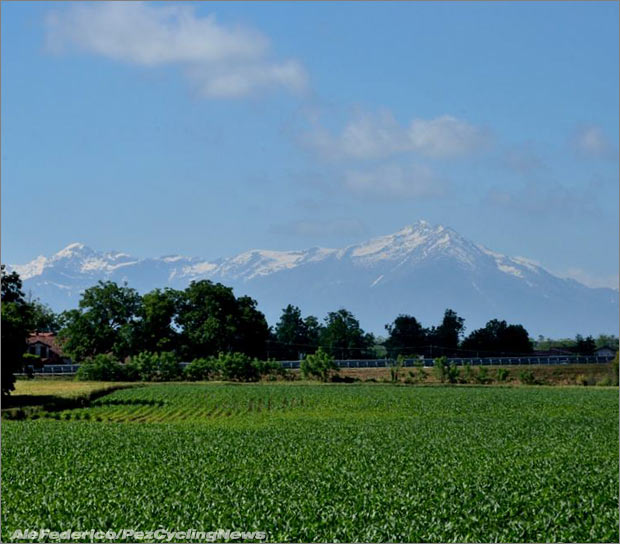 After yesterday’s thunderstorm, the Giro has woke up today with the sun and the temperature was perfect for a bike race. The route was the classic transfer stage, waiting the incoming weekend – and what comes next. Uran has for the first time the responsibility to lead a grand tour and this seems to be the only weak point of the Colombian at the moment. And his team Omega Pharma Quick Step, has got the same kind of problem: no experience to leading a Grand Tour in the final stages. It’s a team that targets the Classis, and specifically the north spring classics as their most important moments of the season. However, people like De Gendt, Pauwels, Petacchi and Poels should have the necessary experience to protect their leader for the best. Team Movistar is unfortunately full of injured riders and the Tinkoff’s seem not to be at the same level. 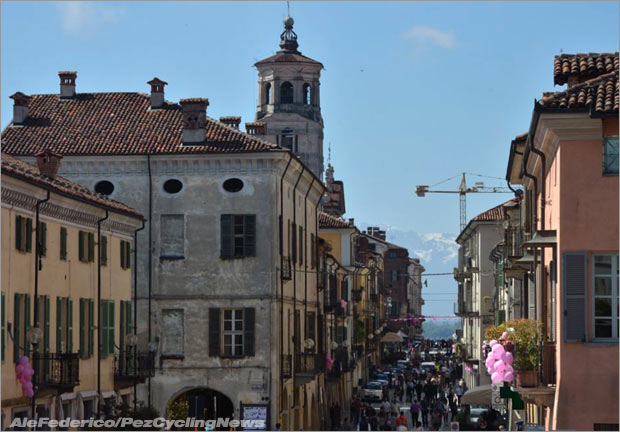 It’s a classic day for a break attack and after few kilometers the attack was there. Six riders in front and the bunch taking it easy. It was a very nice day of sun at the departure but along the route something happened. The finish was in fact located at the end of a valley and all the clouds sitting on the Alps were covering that piece of land. In result we had a lot of thunder but luckily no rain. On the race the riders experienced something worse and again they finished the stage wet. 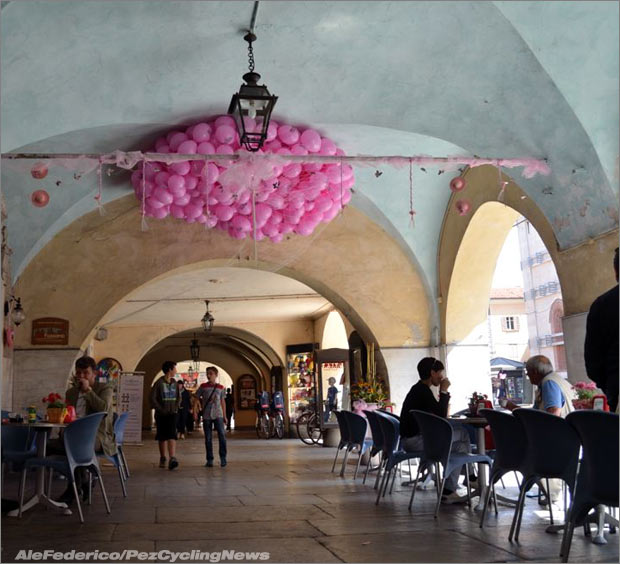 This year the Piemonte region has the luck to host three entire stages of the Giro and I have the luck to chase all of them. The best Piemonte has to offer are the Alps, but this year the Giro visits other parts of the region. Yesterday the Langhe hills and today the flat around Turin. There are several towns, all pretty small but all very clean and nice. The life here is quiet and the people have a lot to enjoy, starting from the good food this land offers. The meat is the base for any local food including pasta: topped with meat or filled with it. But also their focaccias are really good: special mention to the farinata – a pizza made with chickpeas flour which was my lunch today. 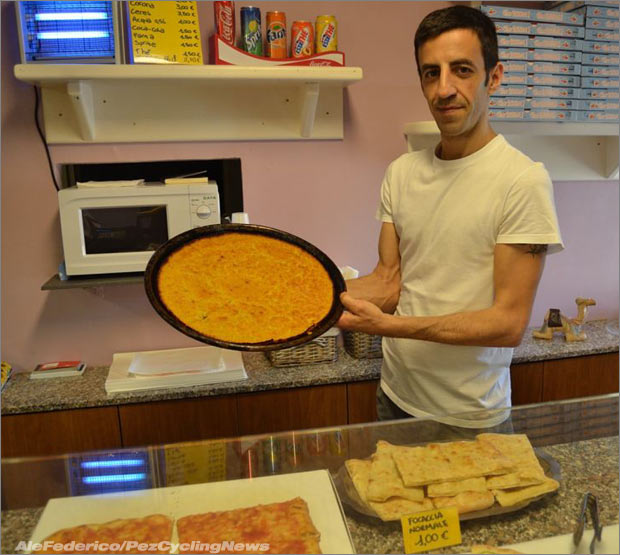 Enzo the baker shows proudly his farinata: a special pizza made with chickpeas flour. 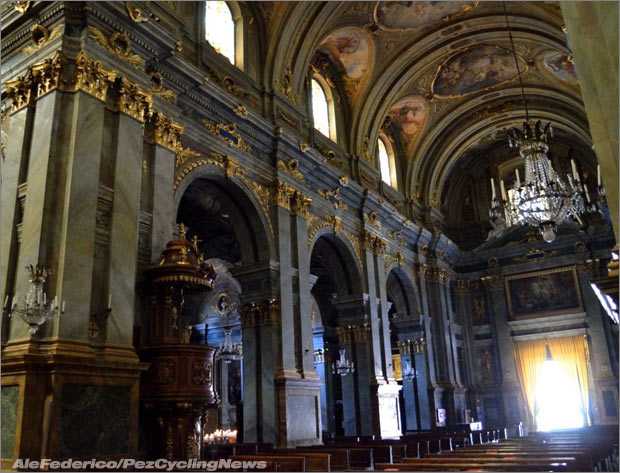 Turin is the greatest city you can find here and the stage passed it from south to north. The stage departed at lunchtime and I had the opportunity to visit Fossano in the morning waiting the riders. I liked the town but especially its church; it’s very big and well painted. The town is quite packed, there’s a main road with arches on the side and a castle, just outside where the departure village was organized. When the riders started to come I moved in front of the race to watch some action: usually the first kilometers are interesting because there’s a lot of fighting but today the break was out too easy. 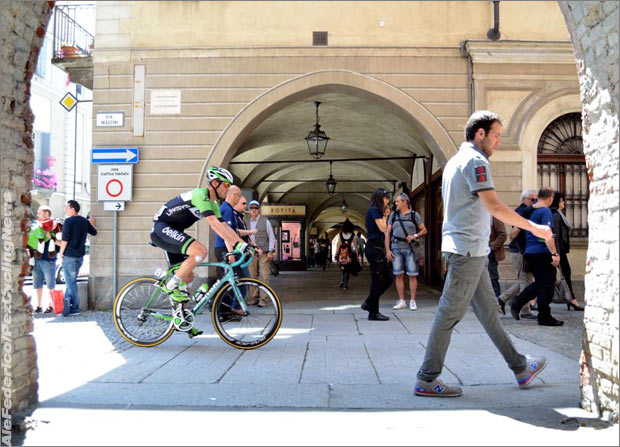 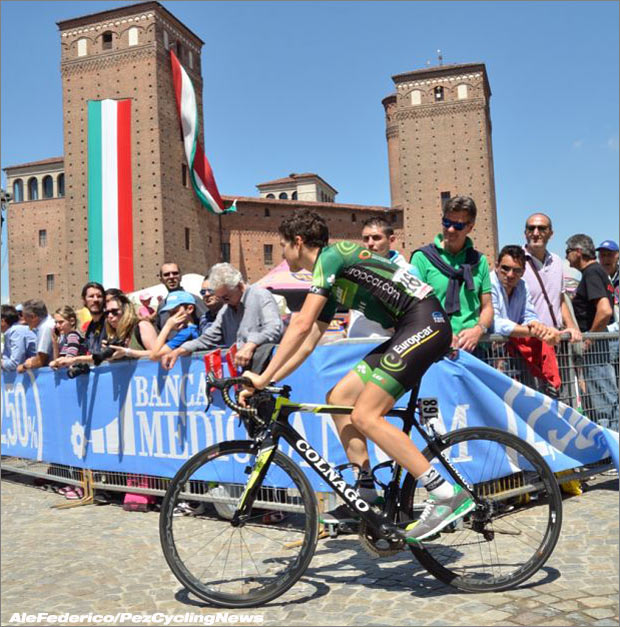 There were many people on the road and many of them wearing something pink. A group of young guys were playing their music just on the side of the road, but there were families too. I like to meet babies especially because they are the future of our sport – watching them while the race passes, their eyes fill with the same wonder as mine. 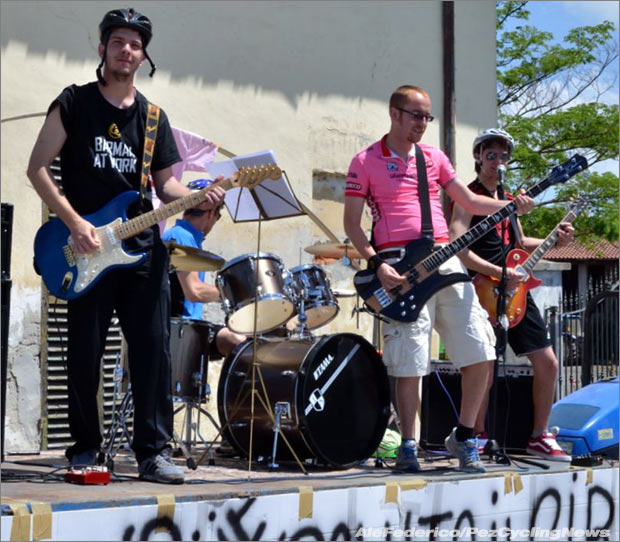 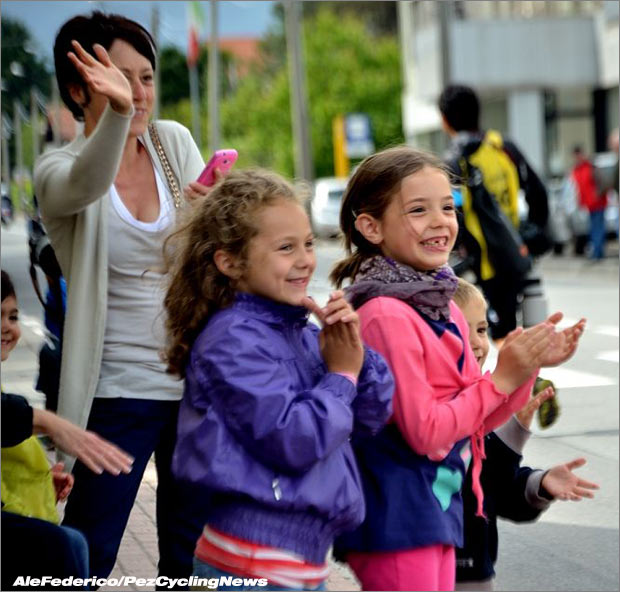 The stage had nothing special to offer on the paper so I decided to watch the finish which was quite a surprise with the break survivors coming to a restricted sprint (the bunch took it too easy!). As usual the finish line is very crowded and all photographers were in position for hours before. The finish line can give however a special view on the riders faces. One within the favorites who was having a bad face for example was the young Italian Fabio Aru: let’s see tomorrow if I have a good look. 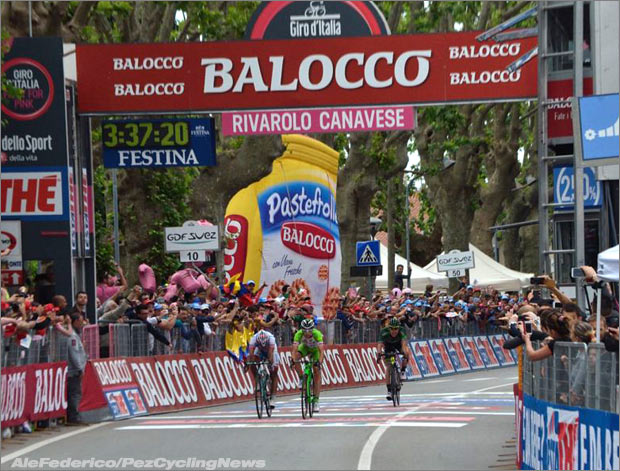 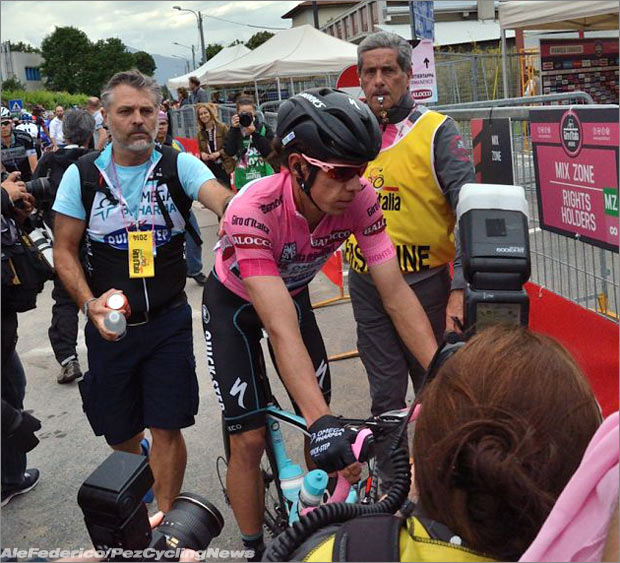 And, tomorrow. We are finally coming to the hot part of the Giro: the Alps. It’s not yet time to overcome 2000 meter elevation, but Oropa and Montecampione are two important climbs. Both of them are dedicated to Marco Pantani because he won on both of them: Oropa 1999 after he recovered from a puncture at the start of the climb and Montecampione 1998 after the famous duel with Tonkov. The stage, finishing in Oropa is the typical Alpine stage with three climbs: the first one Alpe Noveis is a 1st category climb, probably the most difficult climb of the Giro (except of the Zoncolan…) but apparently it’s too far from the finish. 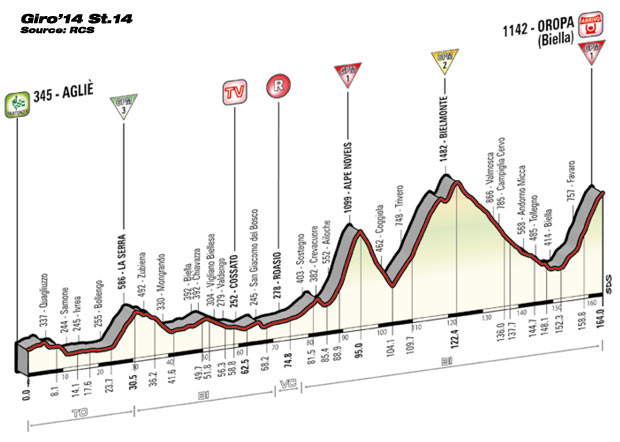 The second one is not hard but its descent is very long and nervous. I will be surprised if a big group will arrive at the feet of the last mountain. I believe a group of 40 riders will arrive at the bottom and possibly one, alone, on top. Arredondo for the long break? Hope so, he is the one I prefer because calculates so few…

Explore the World, One Ride at a Time, with Ride25