Giro’14 St.8: Marco Pantani’s famous training climb the Carpegna is not far from Ale’s home on the Adriatic – which made or a fine day at the Giro d’Italia with Mrs. F and his son Mario. It’s less about the race and more about a day out with family, all under a perfect sky.

When Giro comes close to home it’s nice to have a day out with the family, forget a bit the journo passion but maintain the eyes open when the race comes. That was exactly my day Saturday on the road to Monte Carpegna, when the Giro climbed its first mountain stage. 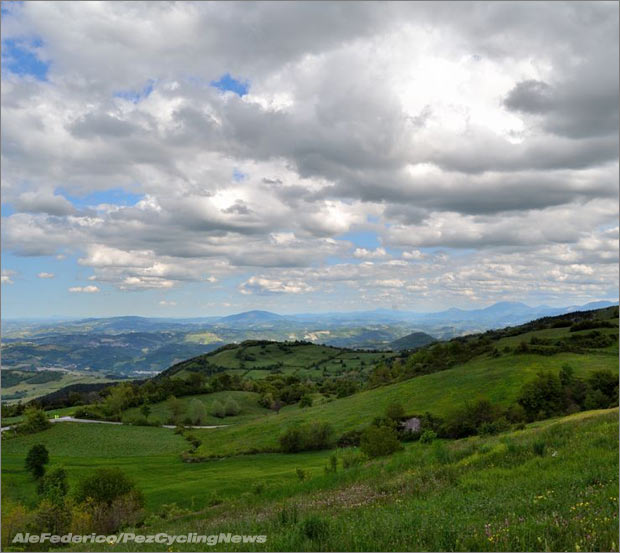 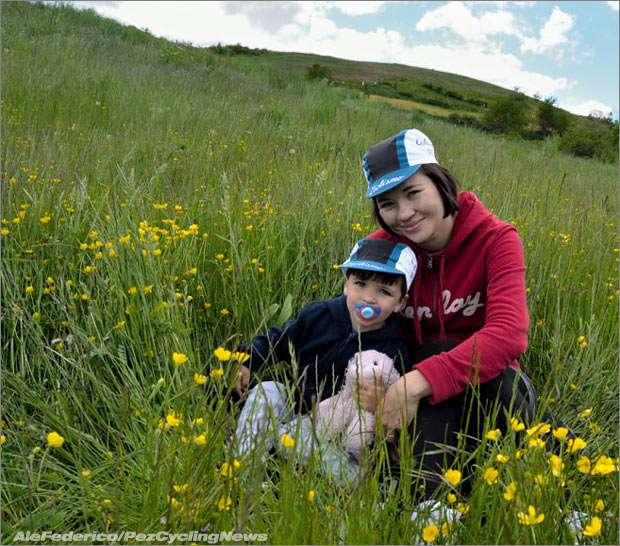 A day out with family to meet the Giro.

I always thought the best movie finish was that one in Vanilla Sky, when the protagonist had to choose between the lucid dream and the real life. The decision was to be taken in a pre-selected location: on the top of a skyscraper, surrounded by a sky full of colored cloud, recalling Monet paints. Being on the top of a building would have given a better view of the preferred sky choice and I had that in mind all the day yesterday when I spent the entire day on top of Monte Carpegna under a sky that was really close to the one of the movie. 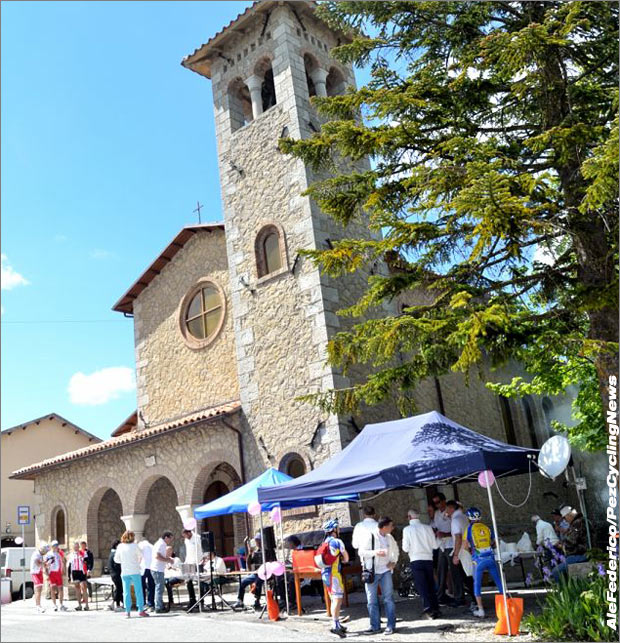 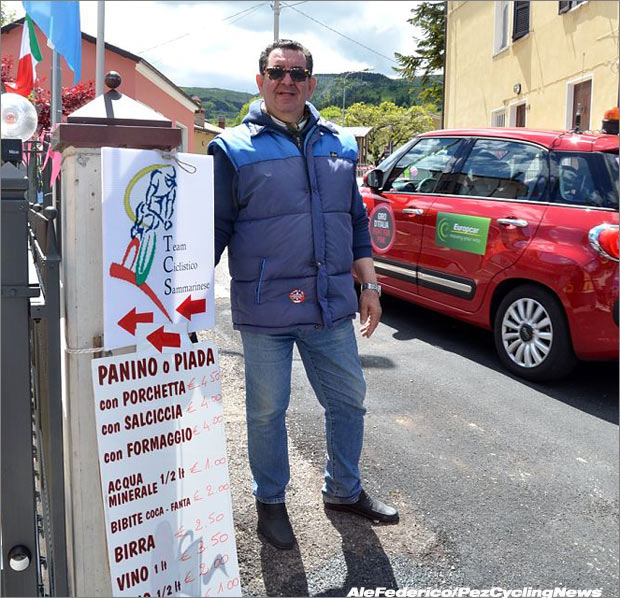 The Monte Carpegna is located in Marche region, we are on top north of center Italy. Here people eat piadina (a sort of flat sandwich) filled with things like grilled sausages or “porchetta”, a full pig spiced with wild fennel, than cut in sliced pieces. 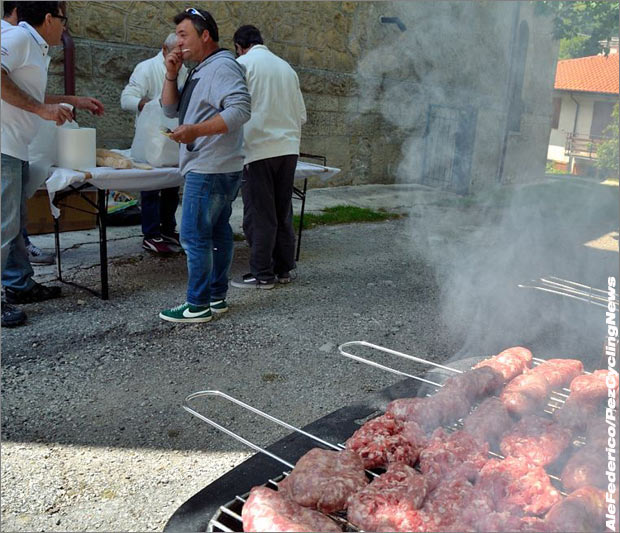 Sausages on the grill – the smokier the better. 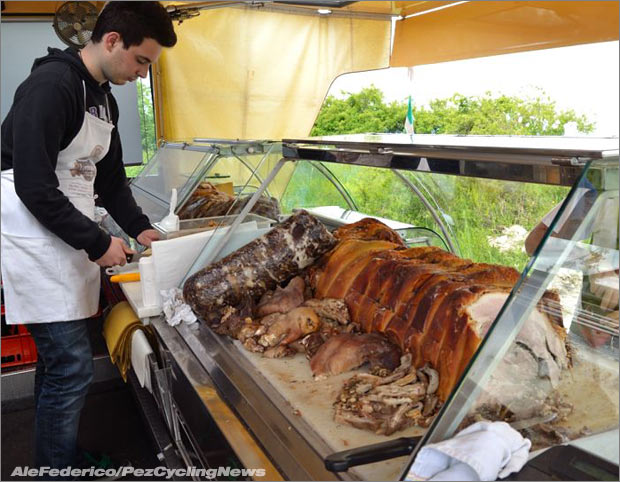 This was the first of three stages the Giro dedicate to Marco Pantani; the rider from Cesenatico, a town located not far away on the coast, who often chose the Carpegna as a test climb during his grand tour training. “Carpegna is enough” – was his famous sentence, that was meaning the climb so hard that was enough for the training. 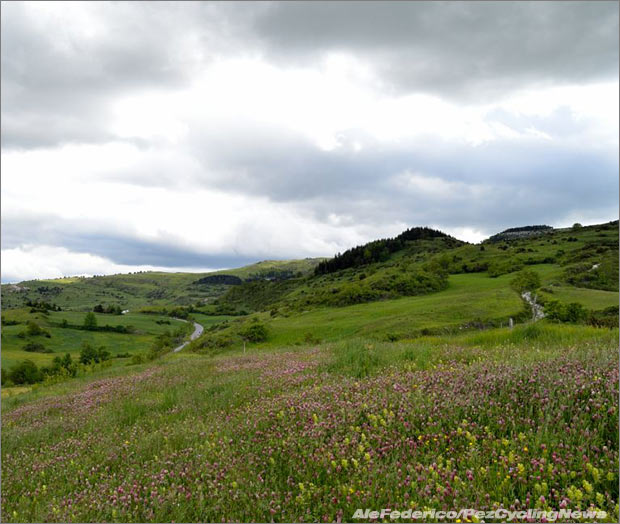 The final climb in the fields. 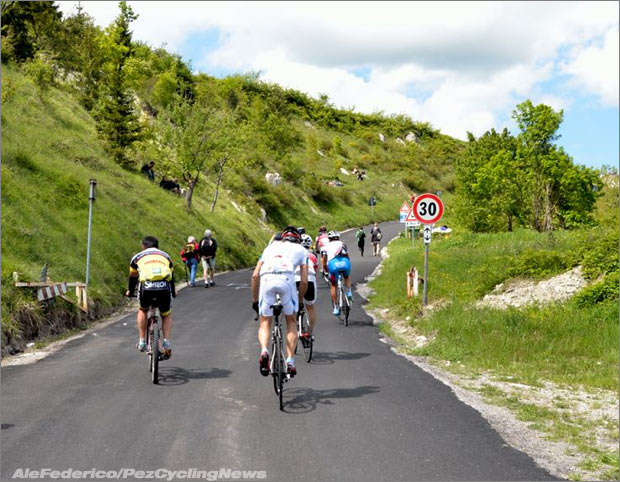 Here’s where it gets steep.

If Marco Pantani said it, we have no objection. But the road loved by Pantani was not the one I walked today (the finish one) but the one on the opposite side of the mountain called “Cippo” which was first category climb during the stage. On one of its switchbacks it’s written (in Italian) “This is the Pirate Sky”, meaning the wonderful view this mountain was able to give to the climber during his hard work. “Every bend you hear his breath” is the third iconic sentence people use here in the memory of the Pirate, again telling how hard were his trainings and how familiar he was with these roads. Anyone living here that you meet or you talk with will claim one Pantani sighting at least; it’s up to you to believe or not. 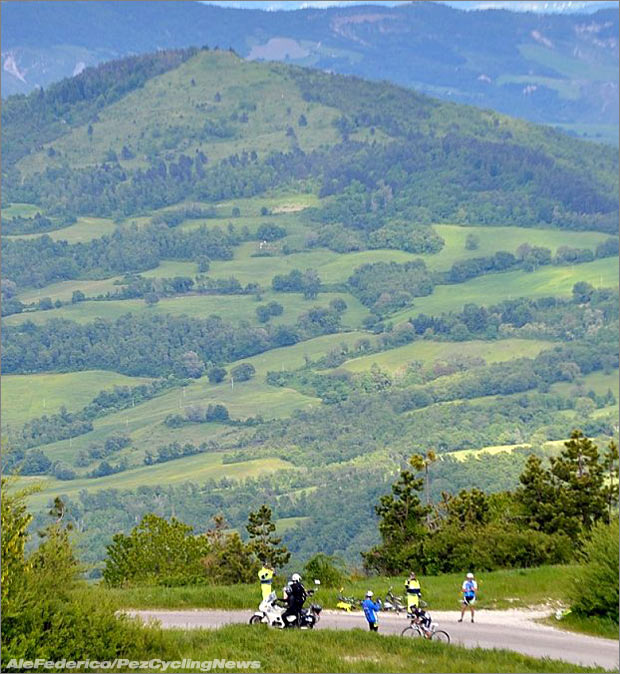 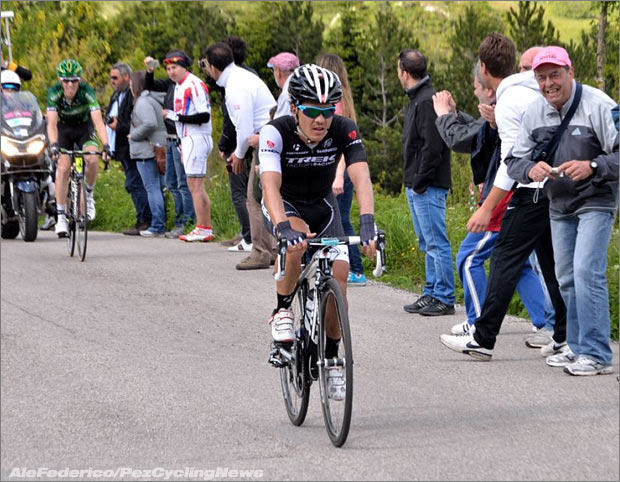 The final climb was very irregular, impossible to set a pace and hard to be interpreted. While waiting the race I thought there would be more selection than the actual one that arrived. Some great names failed, and Scarponi is the heavier one, leaving now to the young teammate Aru the responsibility for the general classification. 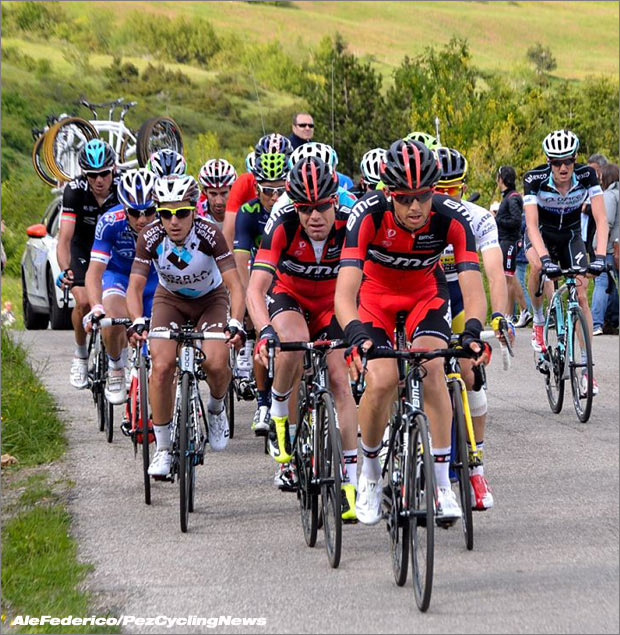 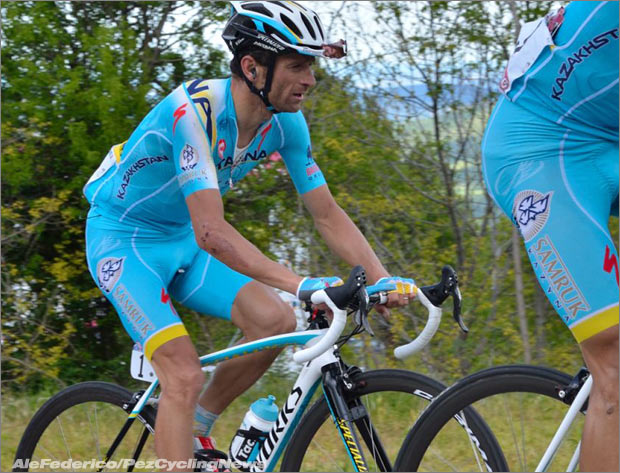 When the race passed in front of me there was still Arredondo leading but Rolland was coming up very fast on him. The big names were packed in a quite numerous group and for the maglia rosa Michael Matthews we had to wait half an hour. But this young Aussie has left here in Italy a good memory and I think we will come to know something more about him soon. 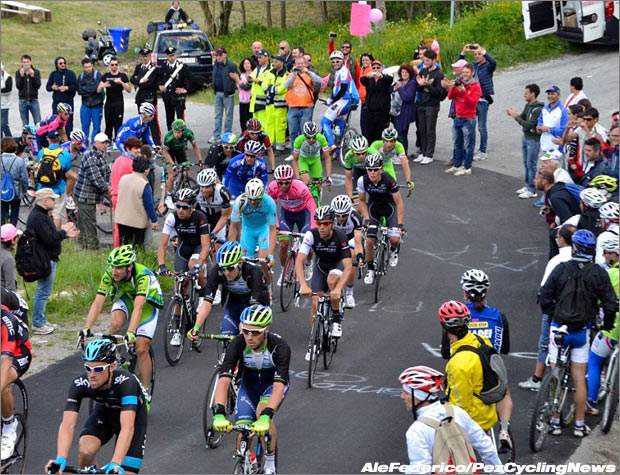 The maglia rosa group with more than twenty minutes delay.

Later I was surprised to know about the Ulissi victory and little bit upset because for the Marco Pantani stage I was hoping a pure climber as winner (Arredondo or Rolland were perfect) but, at the end, it’s the road having the final word in cycling and the road’s decision is always the best one, especially when took under a vanilla sky.
What next? My Giro starts again next Thursday, with the ITT in Piemonte – the time trial of the wines, on the road from Barolo to Barbaresco. It’s the biggest region of Italy, one of the few without seaside, but full of tastes and great people. It will be a hot moment for the GC contenders and a great day to live on the road.