Roubaix ’13: An Extraordinary Day In Hell

PezRoadside: We’d set out to catch Paris-Roubaix with a four-stop strategy. We’d visit pavé sectors 27, 23, 16 and 10, before settling in to watch on TV as the Hell of the North reached its conclusion. But the best-laid plans were sent awry in the most incredible way. This is the story of how we reached the velodrome on race day … 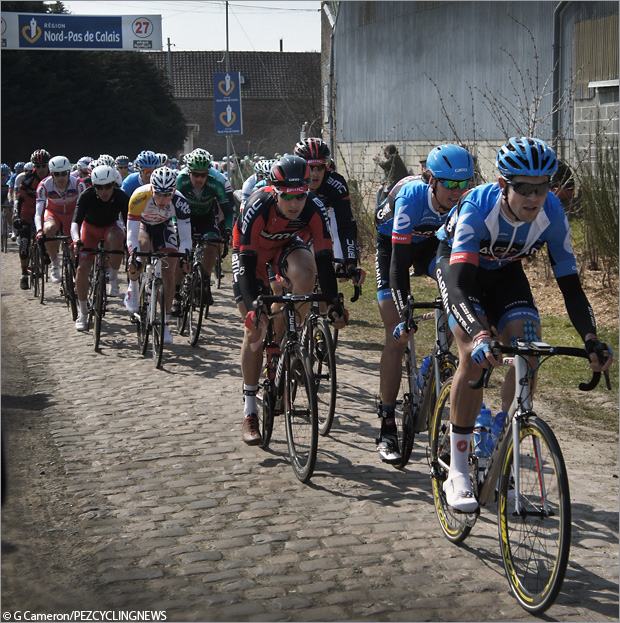 Secteur 27: We tramp onto the Pavé Jean Stablinski at Troisvilles, named for the hard-as-nails Franco-Polish rider who hammered along the cobbles back in the ’40s and ’50s. In fact, he hammered away in the mines beneath them as well.

There’s a little shrine to Stab, with a cobblestone on the top, about 100 meters into what marks the first sector of brutality in this year’s race, and Roubaix’s sparkling new velodrome which sits like a bigger, better replacement toy beside the crumpled old favorite, bears Stablinski’s name.

There’s a doe-eyed waltz of anticipation as press and official vehicles shuffle through well ahead of the riders. Then a crescendo build; cars come through more quickly, and more frequently. They pick their way past the John Degenkolb Fan Club, already in full voice. Now, there’s a buffalo charge of cars and motorcycles … and the riders hit the cobbles at full speed. Garmin-Sharp and BMC are up front.

Only two riders off the back that we could see, an Argos-Shimano and a Movistar. Everyone else together. You can feel the ground shake at roadside as the riders and convoy scream past. The thrill of Paris-Roubaix, not just burned on your eyeballs, but thrumming through the soles of your feet. A hefty Euskaltel rider has already bailed out. His black vest on, he’s abandoned before the cobbles, and is swishing out towards to the main road.

Secteur 23: There’s some over-officiousness on display at a roundabout, leading to Peter Easton, our race chase leader from Velo Classic Tours, to rejig our route. He whisks the bus over a race-free sector of cobbles, through a couple of tiny villages and we’re parked up beside sector 23. 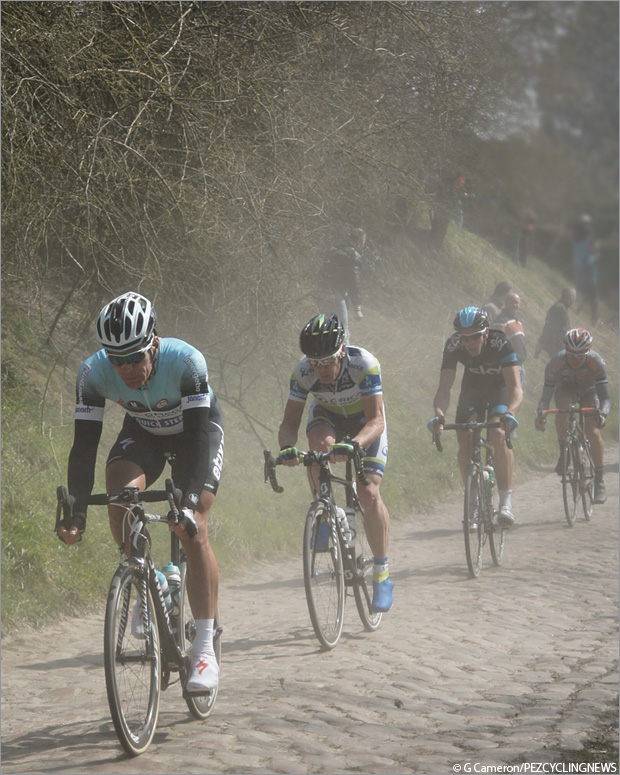 As fast as our feet can carry us, bearing in mind we’re cyclists and cyclists aren’t necessarily runners, we tear down the residential street and are just in time.

Dust clouds clog my nose, eyes, hair, as the police outriders lead Steegmans, O’Grady, Hayman and Clément Koretzky, a Bretagne-Seché rider. They’ve got a small gap on a splintering field. Riders are already in trouble, and off the back. 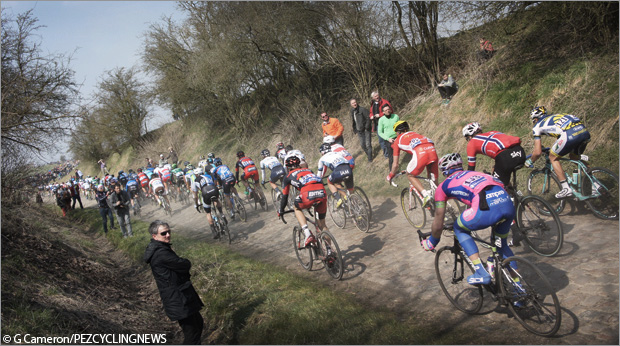 The weather has suddenly warmed up; it feels like spring, and I’ve got a sweat on as we tear back to the bus – it’s turned and facing direction GO!, engine running, ready.

And then, there were two more
We pull out of Vertain and are en-route for our next race view. Up front, an FDJ.com rider is out of the race, wheeling along talking to a race sponsor’s car. He and a buddy just ahead are looking for a way home. Peter Easton bellows out of the window: “You guys wanna ride?” 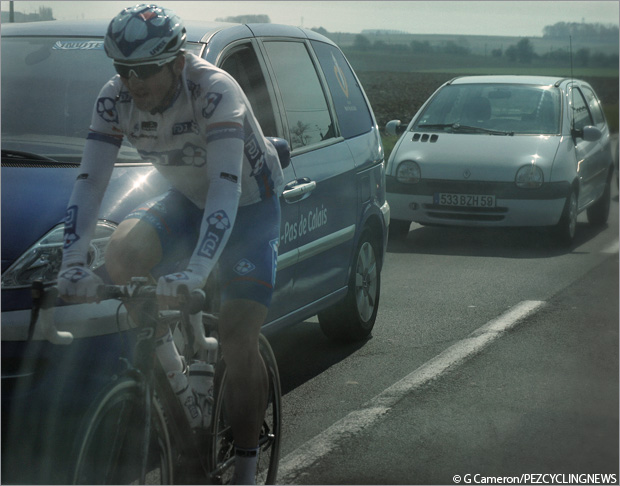 We can’t quite believe it! They peel to the side of the road, and as the VCT party makes room in the bus for the new arrivals, Peter and Asier secure the bikes to the roof.

“Hello … Hello … Bon jour”. Politeness personified from two elite athletes forced out of one of their sport’s most prestigious events before it has barely got going. The numbers are 83 and 84. It’s Mickaël Delage and David Boucher. They settle into the bus, peel off their gloves, unclip their helmets.

Holy shit! Talk about a bonus. Not just seeing the race, but travelling with two guys who just bailed out of it. 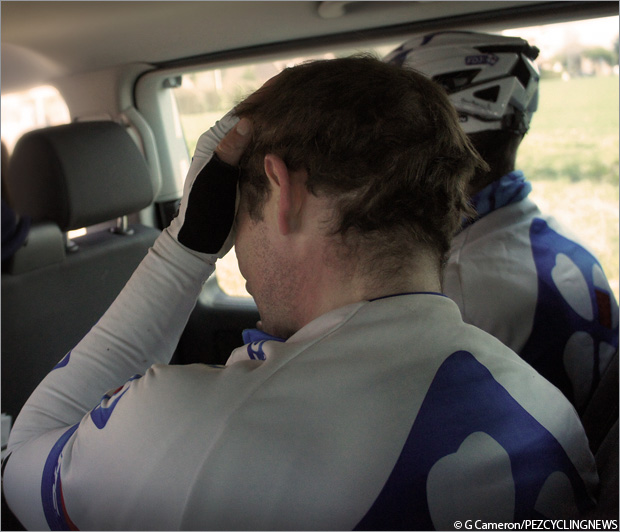 Boucher has better English (pretty good, actually) – he had a major mechanical in the first sector, requiring a bike swap. Delage waited for him, but the delay in getting a new Lapierre, and the motorhead speed of what turned into the second-fastest Paris-Roubaix ever, meant they just couldn’t get back on. No point killing yourself on a day like that. Save your energy for other battles.

It seemed like they just planned to head in the general direction of the finish and see if they could find their way. I felt for them, we all did. Their day’s ambition reduced to being revered curiosities. And they must have known we were just stunned to have them riding with us. But not once did they do anything unprofessional, or express anything other than calm gratitude. No attitude, no athletic superiority. 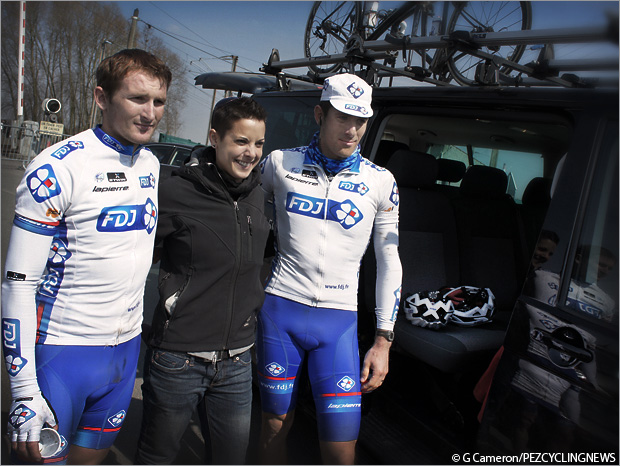 Asier, a guide with VCT, shows them a photograph of one of their team-mates who’d been unceremoniously shoved into the ditch at Flanders last week. “Johan Le Bon”, they instantly chimed in together, laughing. “A bad day … in a bad week!” A thin film of grey dust clings to Boucher’s legs, catching the sunlight as the van squirms along the narrow country roads. 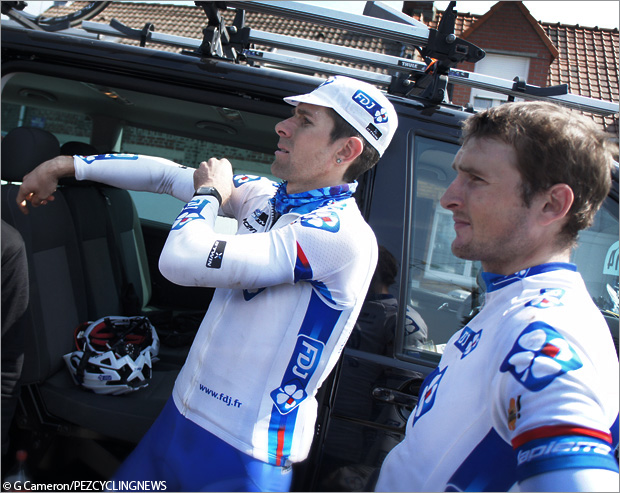 We stop at our next rendezvous, and Peter asks if they want to let the team know where they are. “I’d prefer not to do that!”, laughed one of the guys, whose identity I’ll protect. Their Directeur Sportif, Marc Madiot, won this race in 1985 and 1991, so is not a man who is easily deceived about Roubaix. Peter suggests to the guys that we just take them to the velodrome. “D’accord … oui.” 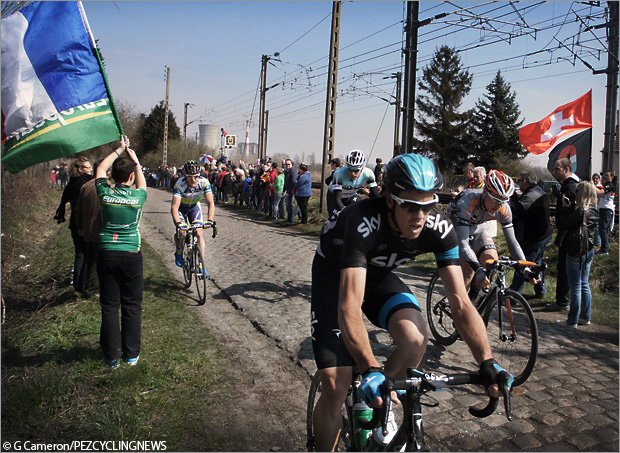 Secteur 16: We watch the race go by on a sharp right-hander as the sun beams down on what feels like the first warming rays this part of Europe has felt all year. 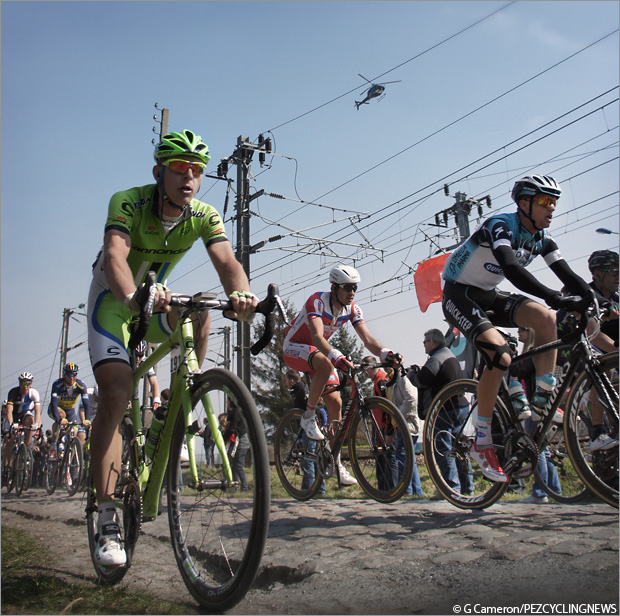 Delage and Boucher patiently hang out by the van; they don’t want any food, but they do take on some fluids to stay hydrated. A Cofidis soigneur comes jogging off the cobbles, heading for his car. 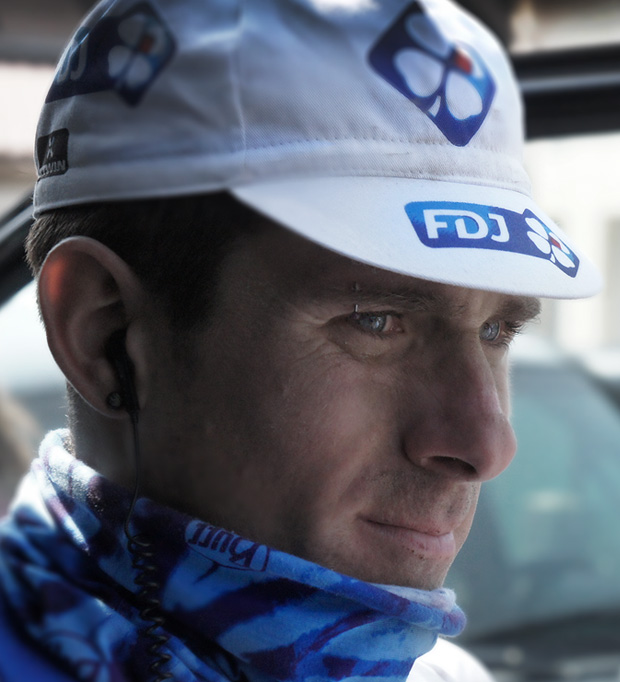 Boucher playfully ducks down, turning his face against the seat. “Oh no, Cofidis!”, pretending he’s a kid again, as if he’s invisible because his eyes are closed. He and Delage giggle as the soigneur waddles past. There are a few bemused double-takes as fans clock the bikes on the roof, and the fact that two of us in the van are tanned, rail thin and dressed in team-issue kit while the rest are in civilian clothing.

A grandmother, mother and toddler speak to Boucher through the closing door as we wait to clear the traffic. Boucher explains mournfully what happened. Grandma and the yummy mummy purse their lips, tilt their heads and coo sympathetically. As the van pulls away, their words of encouragement are lost in the breeze.

Secteur 10: We rattle along, heading for the base camp that Velo Classic Tours’ friend Jean-Luc has set up. Right on the corner of the entrance to Mons-en-Pévèle, it was to have been our last stop. But our passengers have caused a rethink. Peter confirms with them. “We drop everyone here, then we take you guys to Roubaix. To your bus.”

As the food and drink is unloaded, Mickaël and David join us in the tent, to check out the race on the screen VCT have set up exclusively for their clients. 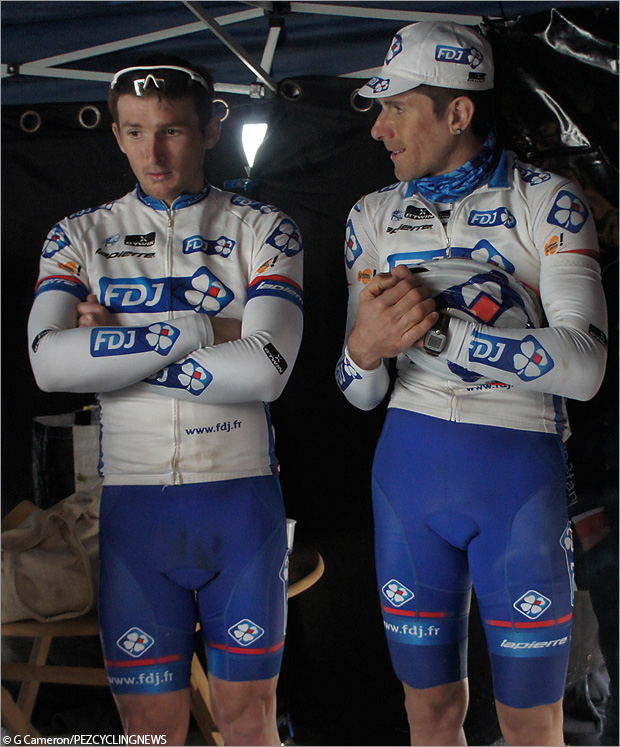 Delage and Boucher watch the big screen, taking in the sight of their buddy leading Paris-Roubaix!

Their team-mate Matthieu Ladagnous is on the front of what looks like an interesting break. Our two new FDJ heroes duck and dive, keeping their eyes on the screen as someone gets between them and the TV. It’s as if they’d have been happy enough to have stayed and watched the race, but we’ve got to get them to Roubaix. I jump in the front of the van with Peter. Mickaël and David lounge in the back, chattering away quietly. 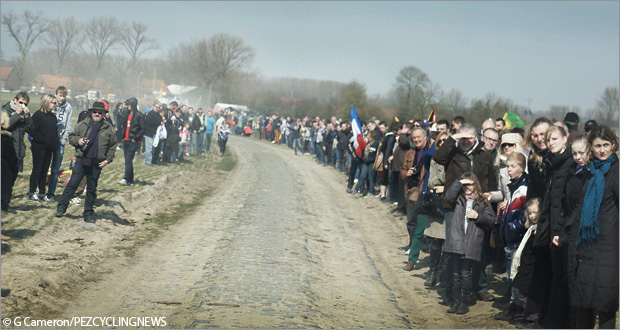 We skip sector ten, drive sectors nine and eight. The crowds are enormous, two or three deep on each side of the road. We hear a quiet “Oh-la-la” from the back of the van as our guests see a new perspective on the frenzy this race generates.

The murmurs behind us are a running commentary. I wonder if the directions are what they’d shout to each other in the heat of the battle.

Boucher leans forward into the front seats. He knows exactly where we are, not disorientated in the least by the ridiculous turn his day has taken.

“You can go straight on here … there’s a deviation available.” A red arrow points us off course and so we skip sectors seven, six, five and four of pavé (including the suspension-shattering Carrefour de l’Arbre.

Before we know it, we’re on the Espace Crupelandt, that now-familiar tree-lined avenue of paving cobbles before the right-hander into the velodrome. We find the FDJ trucks and deposit our passengers. We shake hands, exchange thanks for the ride, and thanks for the experience.

We have press passes, and decide we should try to get into the velodrome. As we look for the press entrance, a security guard beckons us over, opens a gate. We step through and suddenly I realise we’re being waved onto the track and directed to the center of the velodrome! 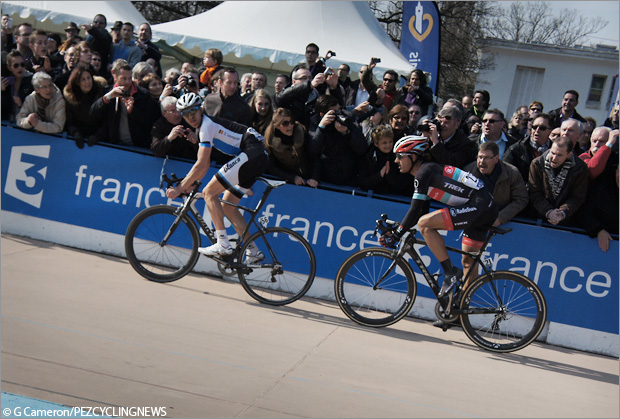 I’ve gone all fan-boy, and am getting caught up in the trill of it all. The big screen in the corner shows seven kilometers to race. Cancellara and Vanmarcke clear. Three clicks later, the Swiss makes a dig and there’s a hug swelling roar from the crowd. I find myself more-or-less opposite the entrance to the velodrome. My heart is beating faster and faster, as I check the screen, recheck my camera for the fortieth time, wait for the arrival.

We hear the thunderous cheers rolling towards us! Cancellara! Vanmarcke! At low speed, this time, eyeing each other as they coast the bend into the home straight. 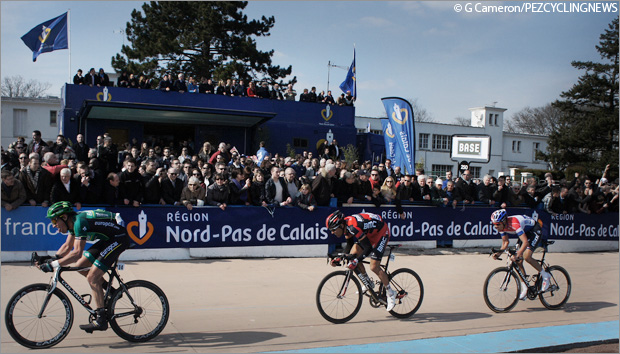 The bell clangs. The speed winds up. Other riders spill onto the track. Officials try to guide them out of the lead duo’s path. Vanmarcke goes higher up the nearly sheer slope of the top curve. Cancellara watches. For a split second, I think the Belgian has him as the sprint unfolds, but I see Cancellara roll past in the final twenty meters, raise a hand.

The crowd raises its voice as one to acclaim the Swiss champion. 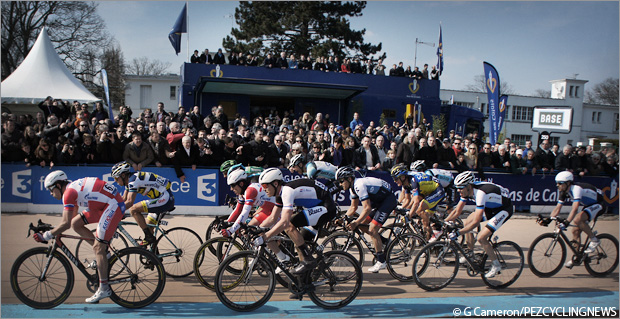 Defeated riders roll into view, and wheel to a halt. Thousand-yard stares. No words. Caked in dust. 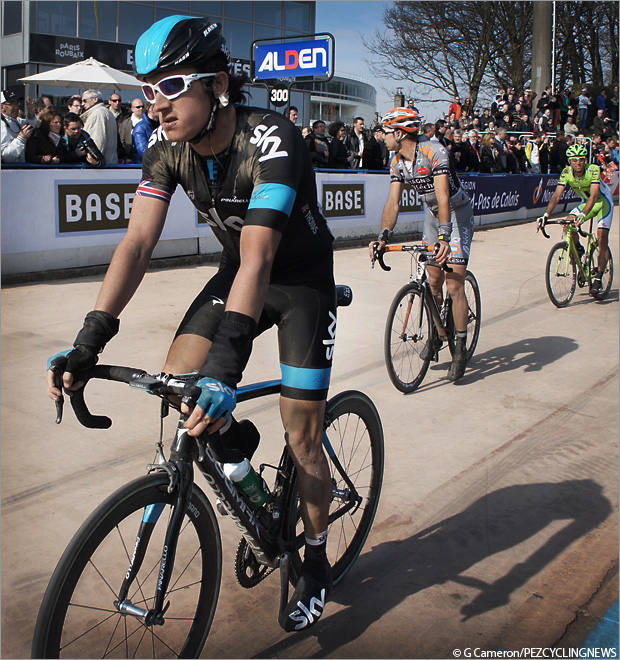 For some, there were small victories, for others big defeats. Cancellara becomes a legend, and sets up a big show-down with Tom Boonen in 2014. 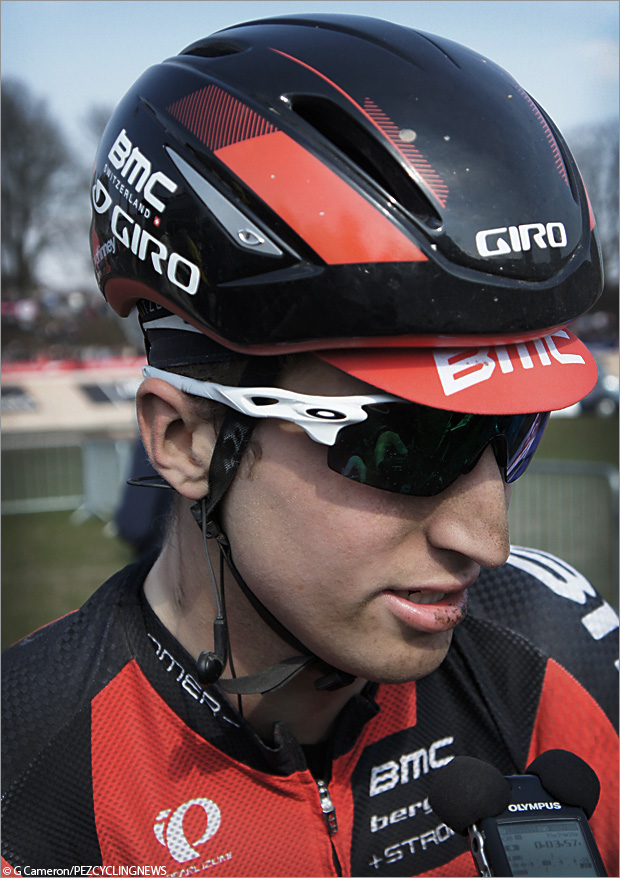 Taylor Phinney admitted the occasion caught up with him; as a former two-time U-23 Roubaix champ, his time as a senior winner will surely come. 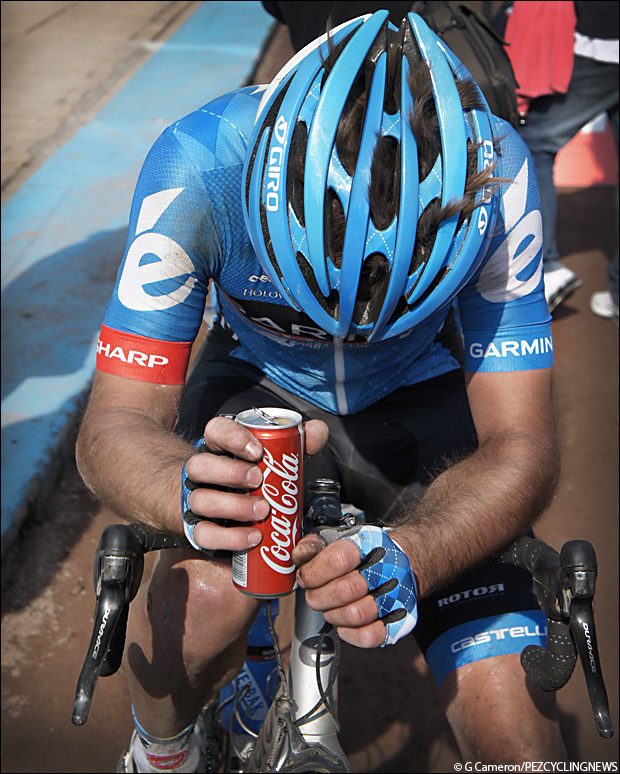 Garmin-Sharp’s Martijn Maaskant was so shattered at the finish, not even the sight of his podium girl partner Lien could bring him quickly back to life. 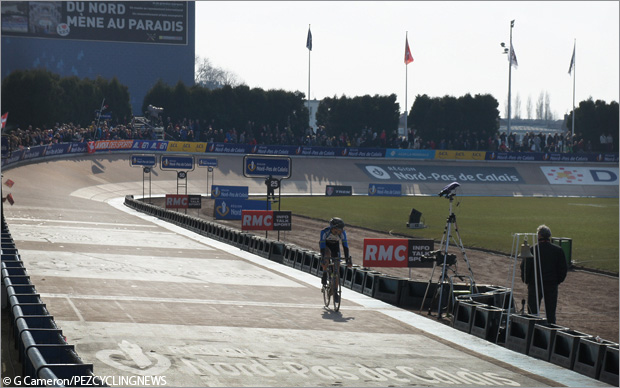 Cancellara was already engaged in a clean-and-jerk to get the winner’s cobblestone above his head as this lone NetApp-Endura rider looked across to see what the fuss was about.

For me, the day was my own little piece of history, something I’ll always remember.

So, this is a message to the FDJ.com bosses. Your boys, Mickaël and David, may not have finished the 111th Paris-Roubaix but they represented your team with class. You take people as you find them, and we found them charming on an extraordinary day in hell.

A big thank you to Peter from Velo Classic Tours for putting this amazing day together.