Race Report: The Northern Spanish Classic always has an exciting finale with its crucifying climbs of the Jaizkibel and Arkale and today was no exception. Young Tony Gallopin chose the correct moment to take an opportunist lead from a very strong beak and took it to the line. The “New Guard” comes to the fore!

Movistar came into this race with the favourite rider in Alejandro Valverde and arguably the strongest team. Nairo Quintana dragged his leader clear to initiate the winning break, but in the end it was the young Frenchman Tony Gallopin who showed he has an old man’s head when it comes to tactics. He made his move when the top men; Roman Kreuziger and Valverde were watching each other and he didn’t look back till the line in San Sebastián. Txapela to Gallopin!

The Clásica San Sebastián or if you prefer its name in Euskara; Donostia Klasikoa is Spain’s top one day Classic, infact the only Spanish one day race on the WorldTour calendar. The winner of two editions; Luis León Sánchez (2012 & 2010) was not on the start line, but Alejandro Valverde & Nairo Quintana (Movistar), Igor Anton (Euskaltel-Euskadi), 2011 winner Philippe Gilbert (BMC), Jakob Fuglsang (Astana), Richie Porte (Sky) and Alberto Contador (Saxo-Tinkoff) were there to see the ribbon cut under blue skies and warm temperatures.

The Action Un-folds
The first attack didn’t take long in coming and Olivier Kaisen (Lotto Belisol), Luca Wackermann (Lampre-Merida), Matthias Krizek (Cannondale) and Javier Aramendia (Caja Rural-Seguros RGA) built up a lead of 11 minutes at the intermediate sprint in Azpeitia after 50 kilometres. William Clarke of Argos-Shimano had been chasing on his own and at one point was nearly with the escape, but going through the sprint he was 3:40 down and looking like he was wasting his time and energy.

Back in the peloton; Movistar were leading the not particularly fast chase with Alejandro Valverde the nominated team leader for the day. His team mate Nairo Quintana; second placed rider in the Tour de France told Basque newspaper Diario Vasco that he would help Valverde today to repay him for his help in the Tour.

First time up the Jaizkibel and Wackermann was first with Kaisen and Krizek just behind as Aramendia was dropped.

Second time up the Jaizkibel and Wackermann and Krizek were the last to stay out in front of the Movistar tortured peloton.

The Winning Move
Valverde and Quintana split the bunch and set up a leading group with Belkin and World champion Philippe Gilbert (BMC) working hard for the chase bunch of around 20 riders.

Quintana set Valverde up to be in the lead group and then eased off to drop back leaving Roman Kreuziger (Saxo-Tinkoff) to attack over the top of the Jaizkibel for the last time to head down the other side solo.

Gallopin attacked early as Valverde and Kreuziger watched each other. Roche and Landa jumped after him and at the top they were 15 seconds behind Gallopin with the others on their heels with 15 kilometres to go.

Gallopin didn’t take any chances on the wet descent holding off the chase group coming into the last 10 kilometres. The chase split on the Arkale climb and descent, Kreuziger, Roche, Valverde, Nieve and Landa made the grade.

As Gallopin entered the outskirts of San Sebastián, with 6 kilometres to go, he had a lead of 25 seconds on the five chasers and the main peloton had eased off completely.

The Frenchman buried himself in the streets of Donostia (San Sebastián) and onto the little climb of the Alto de Miracruz with 4 K’s to go. The chasers lost Landa and with 2 kilometres to go the lead was down to 20 seconds.

The Last K
Under the red flag and Gallopin was still flying to his biggest victory with 16 seconds advantage and the race in the pocket of his RadioShack Leopard jersey. He came round the last bend to look back and see he had no one to endanger his big win. Both arms went in the air for the young 25 year old Frenchman in a sign of joy and relief that he had managed to hold off the others. 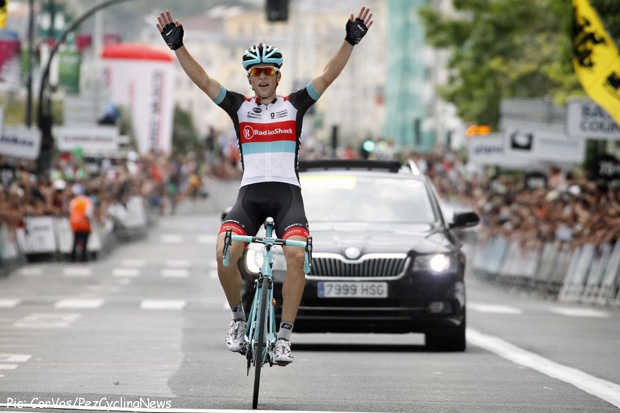 Of the four, Roche led out with Valverde and Kreuziger on his wheel, as expected the Spaniard had the better jump for second place taking it ahead of Kreuziger, Nieve and Roche.

After the finish Tony Gallopin said “it has been a tough year, but I came out of the Tour well. This is the first time I’ve seen this race and well…”

All he had to do know was to wear the big Basque beret (Txapela) on the podium to complete a perfect day. 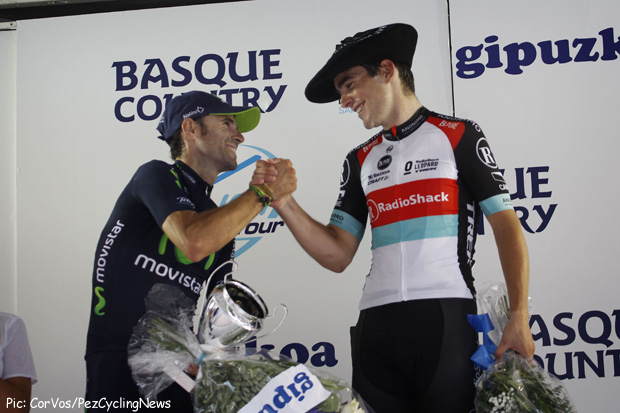 In His Own Words: Leigh Howard Previews Tour de Pologne