Roadside Report: After the snow of last year’s race chase, this year saw our man Alessandro deal with the cold, driving rain and wind. Still he wouldn’t have dreamed of being anywhere else on Sunday but chasing the great Primavera again, roadside with friends for a perfect day out.

To chase the Milano Sanremo is not a big deal, I just have a plan in place and must be on time to see each passage. To feel the Milano-Sanremo though is something different. You cannot just go there and wait for the race but you have to nurture the emotion she can give you. This comes naturally to me, maybe because I lived for years on these roads.

So, the new plan was to involve a friend in this adventure and try to make this understanding for him too. Salvatore (Salvo) is a good friend of mine, but one of those not interested in cycling at all. The perfect person to travel with, a good driver, and good company any time, especially for the tough races.

The lights of Milano on the eve of the big race

When Salvo told me he was happy to come with me to Sanremo I thought I asked him too much. A lot of driving, a lot of effort for a bike race which isn’t worth it if you don’t love it. So, I started to think of the event with different eyes. How to enjoy the day better with a friend not focused on the race?

The food indeed was a good argument. I know a place on the coast, on the way back from Sanremo; this place is called Recco, is a small town on the sea just few kilometers south from Genova. In Recco it’s famous the “Focaccia di Recco”, a sort of white pizza made with a local cheese and not tomato on it. It’s a special one that you can only eat there; it’s that kind of target you put at the end of an adventure in order to make the deal working better. “On the way back we will have the Focaccia di Recco” – that was the common target since the departure from our Adriatic coast.

The race is long, very long, so we stayed in Milan the evening before. A phone call to Angelo Giangregorio and we were already organizing the dinner in the Navigli area in Milan. This is a very interesting place with a lot of young people enjoying the night and several restaurants and bars are open until the morning. We had to wait a while for our pizza but at the end it worked really well. Talking a lot, me and Angelo, about the next day, the race and pictures. Salvo was little bit out of the conversation but was intently following the discussion; that was the best way to learn for the following day. 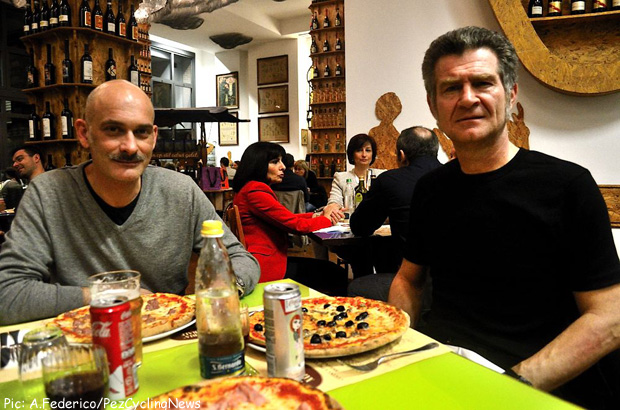 The pizza dinner with Salvo and Angelo talking about the next day, the race to come, and good memories of previous years.

The race day starts really early at Sanremo. The departure village has moved behind the Sforzesco Castle and there’s some more walking to cover. It’s wet, it’s cold. It’s another nasty Sanremo. Riders are reluctant to come out of motorhomes and time goes fast. 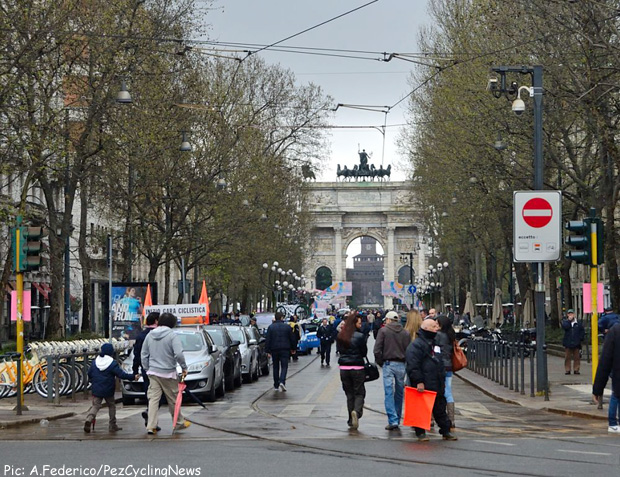 The new start area at Arco della Pace, just behind the Castello Sforzesco 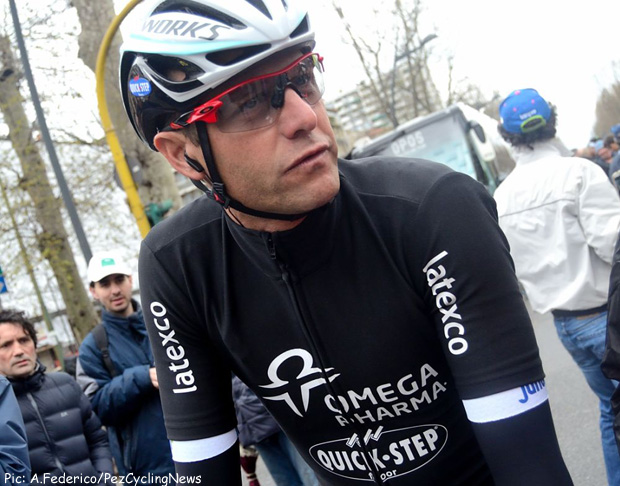 Alessandro Petacchi was one of the Italian winners taking the start in Milano. He won it in 2005 on the via Roma at the end of a massive sprint.

We decided to leave the start earlier than usual to avoid a furious run and we moved to watch the “real start” after 10 km of racing where usually the early break makes the move. That is until the info car alerts us of a fast start and already a few guys are trying to break on the long, large road while leaving last Milan’s suburbs. 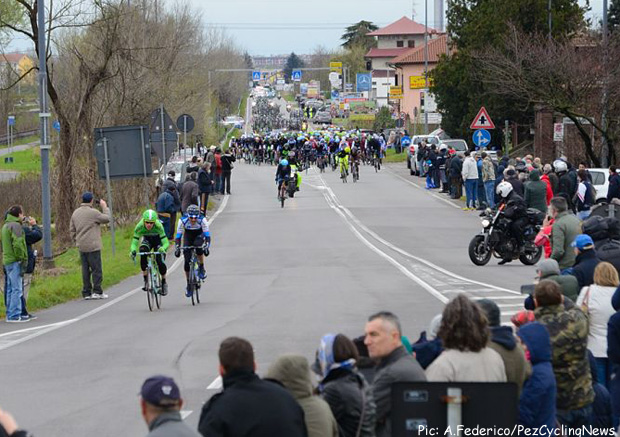 At the Binasco roundabout to watch the first move of the day. Tjallingii and Barta are already out and you can see how hard it is to escape from the furious chase of the group.

We have in mind a couple of other flat passages and while we cover the road from Milan to the Apennines the rain starts to fall. When we come close to Ovada it’s more than light rain but a real shower. A cold shower. The break stabilized the gap at close to 10 minutes and it’s pretty normal to have this at Sanremo. The length of the race will help the peloton with the chase of the group. 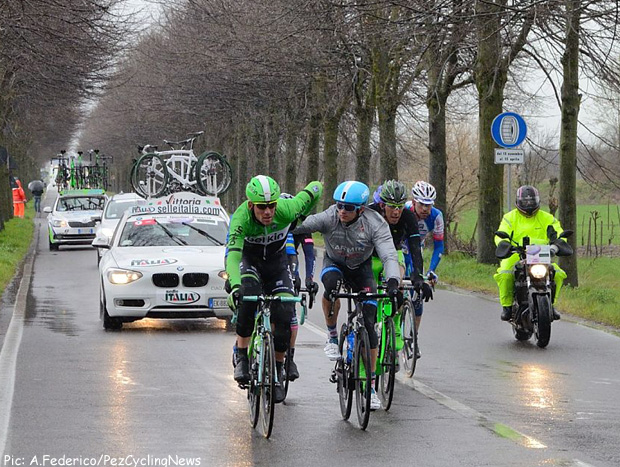 The break continue their progress on the flat. They are 7 after two hours of racing when the race passes in the Piemonte region. 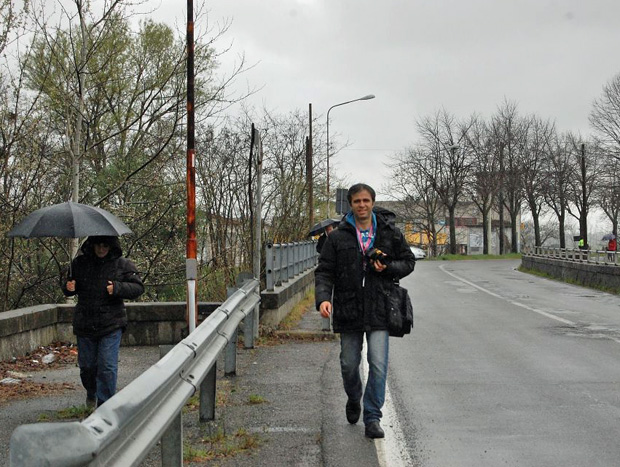 Despite the rain, and the cloudy day it’s still nice to be on the road chasing the Milano Sanremo! 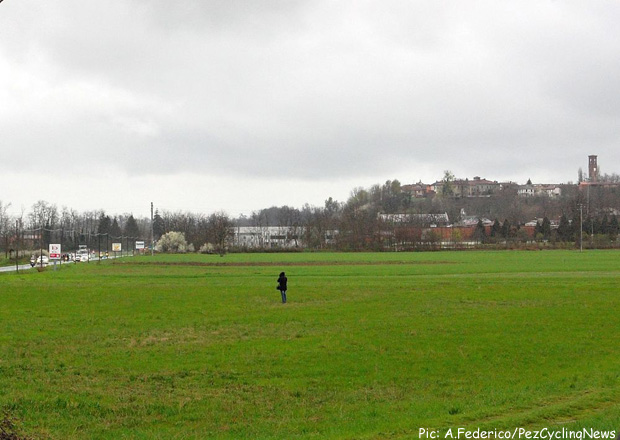 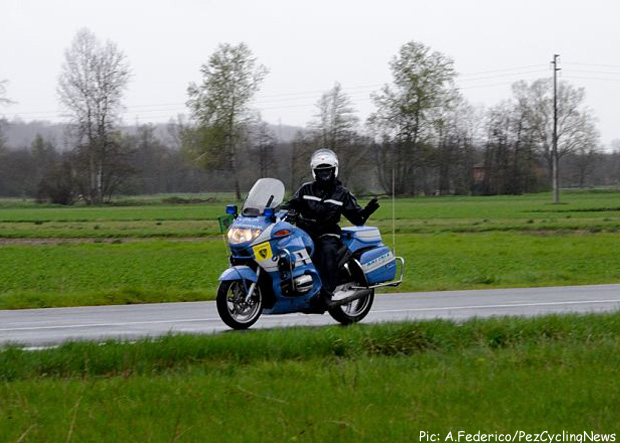 To get my focus correct I normally take a shot of the motorbike passing before the race and this cop just wanted to be part of my story. 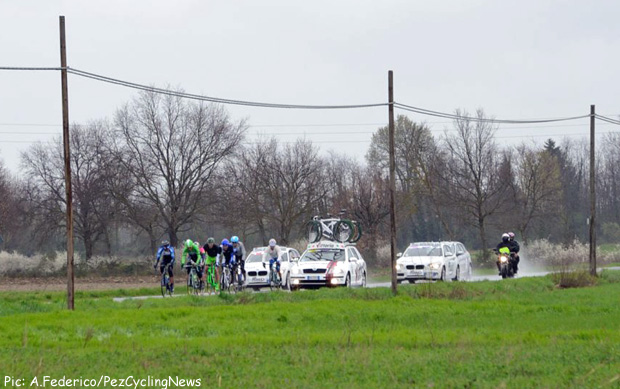 When we pass by autostrada the Turchino pass we hope to find better weather on the Riviera, but unfortunately the clouds are there, are dark and the most dark seem have decided to chase the Sanremo as we did. However the sea view is anyway a relief. The Ligurian coast is fantastic with any weather and smelling the Tirreno is better than ever. 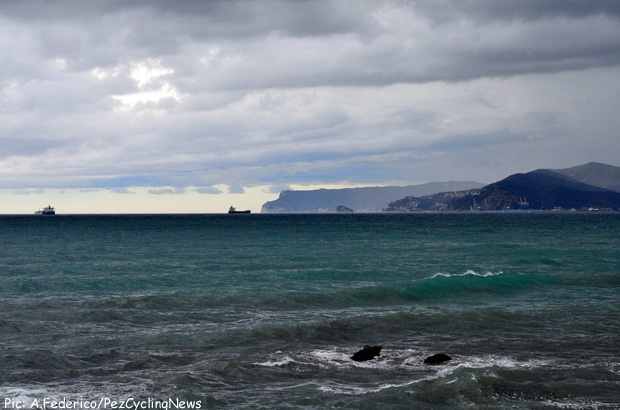 Here we go. The sea! Not a good day even on the coast, the clouds aren’t promising anything good. 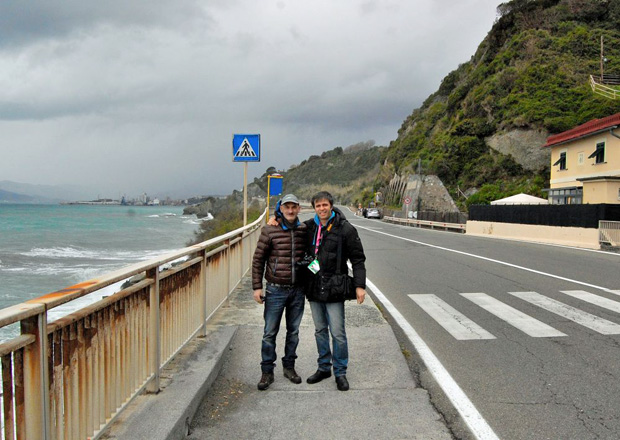 Me and Salvo waiting for the race on the coast. 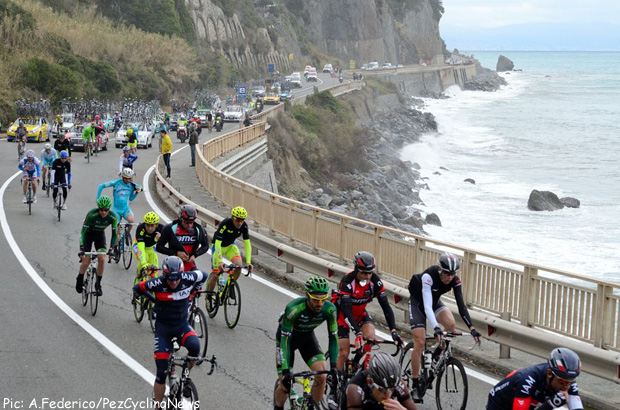 The group passing on the coast. Many riders are changing clothes here because the temperature is warmer than on the Turchino pass.

Now the race comes to that point where all favorite’s teams move ahead and make the tempo seriously. In the back there’s a lot of traffic but at any passage it’s pretty clear that today the weather will make the difference. Several riders are behind and several others are trying their best to not lose wheels. 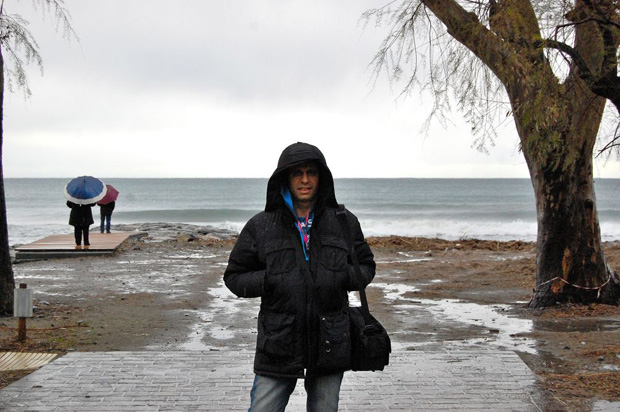 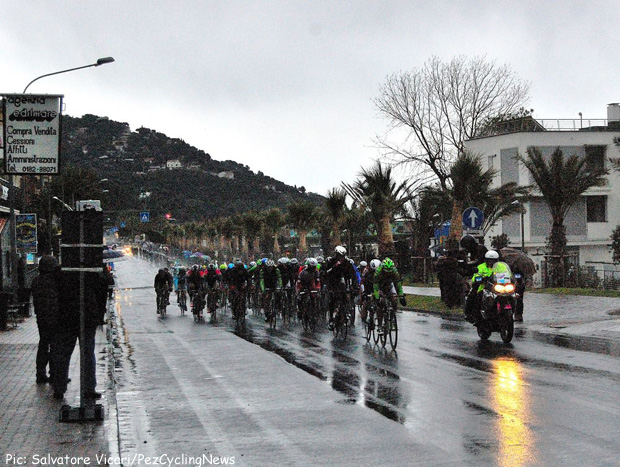 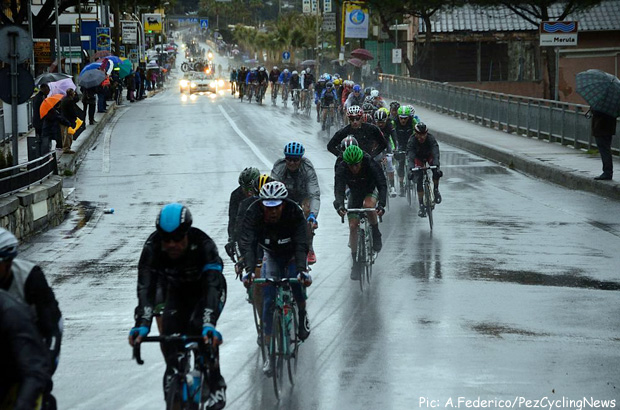 When the group passes Andora it’s dark, seem the same of last year: like night time. At that point we’ve almost done it; I tell it to Salvo, who’s a little bit tired after a long day of driving with the final recommendation: “here we make the day; after seven hours of chasing we have to make a good job on the Poggio, the race starts really over there”.

Over the Poggio is much a better day. There’s no sun, there couldn’t be, but it’s not raining and the light is double than what it was in Andora. The race comes fast and we decide to be in two different spots. Salvo, who’s a beginner, makes a great job. A good spot on the Poggio is not a small deal! 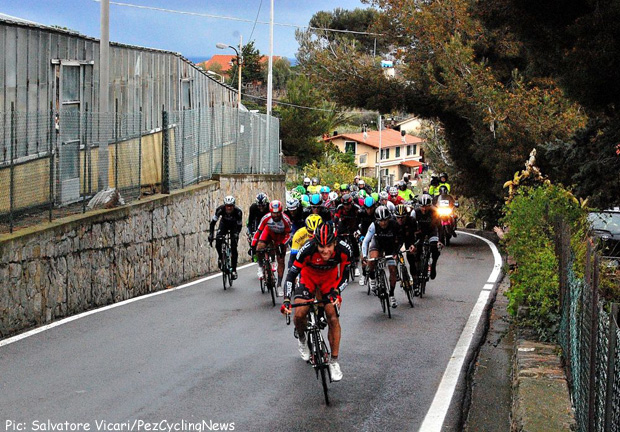 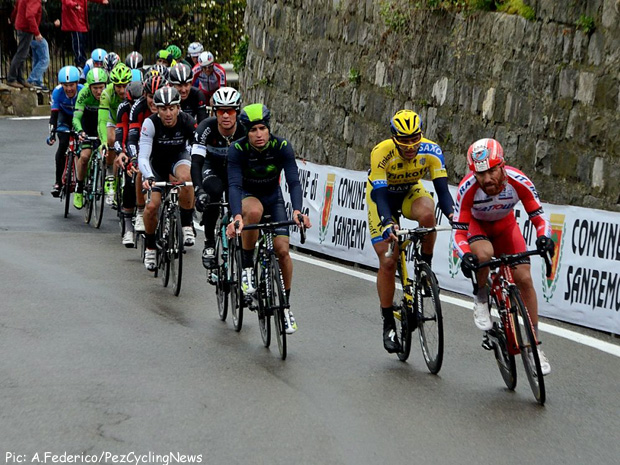 After the race we decide to have a coffee on the bar on the top and then we move fast towards Genova, and over, to Recco. The lonely beach of Recco is waiting for us in the early evening. The lights of the town are on and we sit to our table in front of the sea. Out there is windy and cold and the Tirreno repeats its loud sound covering all noises. 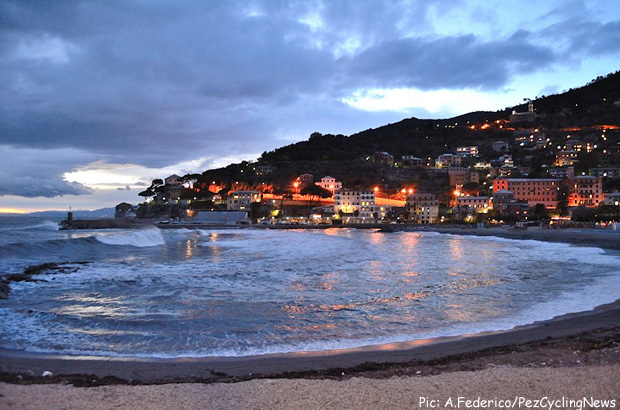 Inside there are two friends, sharing a fantastic day out and looking forward to a new adventure. In front of them their prize: two large portions of focaccia di Recco to cover all efforts and recover for the long way back! 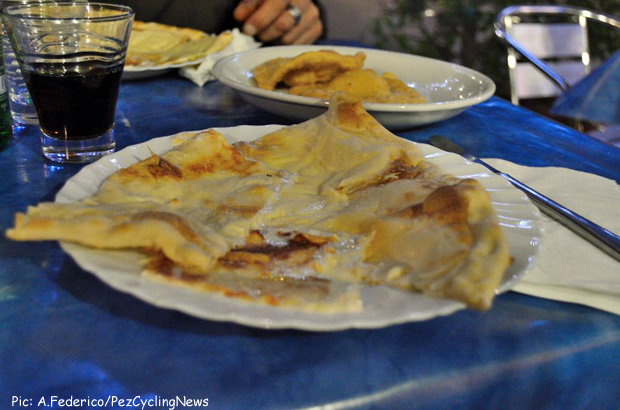